People often ask me “Robo, why did ya’ll name it Happy Hour if it only takes 2 minutes to read?” Well, the name came about after VeeBee and I back and forthed for 5 minutes over texts. It seemed like a fitting title, it’s just sitting around talking about the day’s events no matter how big or small. An end of the day article to just unwind. And the fact that it takes me an hour or more to write after digging around the corners of the internet and forums. In the long run it doesn’t really matter. Nobody has ever asked me that question. I just couldn’t think of anything else to open with. And there’s the whole point, plain and simple. It’s Happy Hour!

BBTS put up preorders for The Walking Dead Comic Series 3! With pictures!

The list for this series leaked earlier this week but I don’t feel like an announcement is an announcement until we see images. I’m quirky like that. The series contains Andrea, Dwight, Punk Rock Zombie, and Rick Grimes. And if the final figures turn out close to this good I will have to snatch them up for the wife. Which I’m already afraid I may have to do. I bought her The Walking Dead Compendium Vol 1 just a few days ago and she buzzed through that like a scalper on truck day.So I’m double screwed, having to go back and get the comic figures and finding Vol 2 for a decent price.

Still, keeps me out of the doghouse when I buy toys, ha!

You can preorder Series 3 on BigBadToyStore.

What goes into creating a new action figure from DC Collectibles? DC Entertainment’s Jim Fletcher and sculptor Phil Ramirez take you through the sculpting process from beginning to end in this three-part video series. Join us as we go from clay…to Clayface!

Look for the Batman: Arkham City Clayface Deluxe Action Figure at your favorite comic or specialty store in July, 2014. 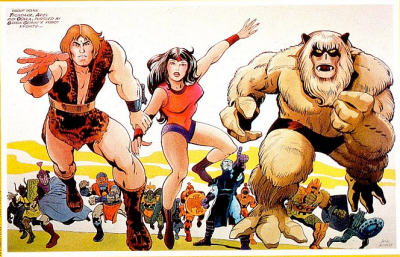 That picture just begs to be made into action figures. Masters of the Universe Classics style. I’d even take a third party kit for Thundarr and Ariel. Ookla may prove to be a little more difficult.