Ashley Wood’s Popbot universe has long been one of the cornerstones of the 3A Toys brand, and the Tomorrow Queens have long been among the more popular aspects of the Popbot imprint. They’ve always struck me as a mix of Bond girls and killer Japanese schoolgirl death machines, which has always made me more than a little bit intrigued. For years, fans of 3A’s 1/12 scale offerings have had to make due without the Tomorrow Queens, but that has finally been remedied with the arrival of this box set. 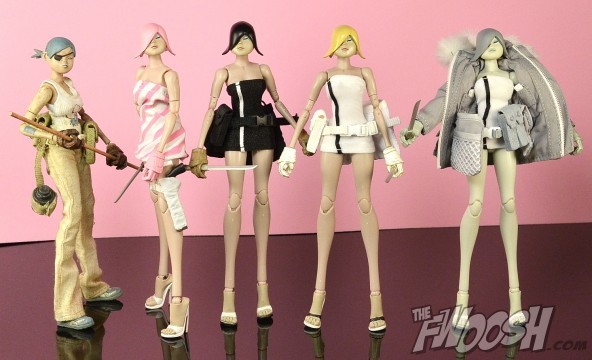 What’s curious about this set is that it was these five figures in particular that were chosen to kick off the 1/12 Tomorrow Queens. None of these are the much sought after “OG” Tomorrow Queens, figures that had been revealed in 1/12 scale a short while before this set was announced. So while it is certainly awesome to finally add these particular figures to the collection, one has to wonder why the original characters are still in limbo. Hopefully they see the light of day soon, but until that happens, we have these five gals to keep us occupied, and, honestly, this is probably the more interesting assortment anyway.

Considering this is a set of five female figures, the box art is not at all what I was expecting. It’s a minimalist, clean design that is completely tasteful and, well, downright attractive. Given that Mr. Wood was calling this set the “Ten Feet to Lick” set, it’s amazing that there are no weird close ups of feet or dripping you-know-whats anywhere to be seen. That’s not a complaint, mind you, I’m just surprised.

The majority of the bunch are distinguishable by their hair and dress colors, except for Queeny, of course, whose eye-patch, haircut, tattoos, and outfit make her unique. And, honestly, hair color is usually a pretty thin reed by which individual character differences are established, but coupled with each figure’s minor outfit differences, it feels like enough in this case. 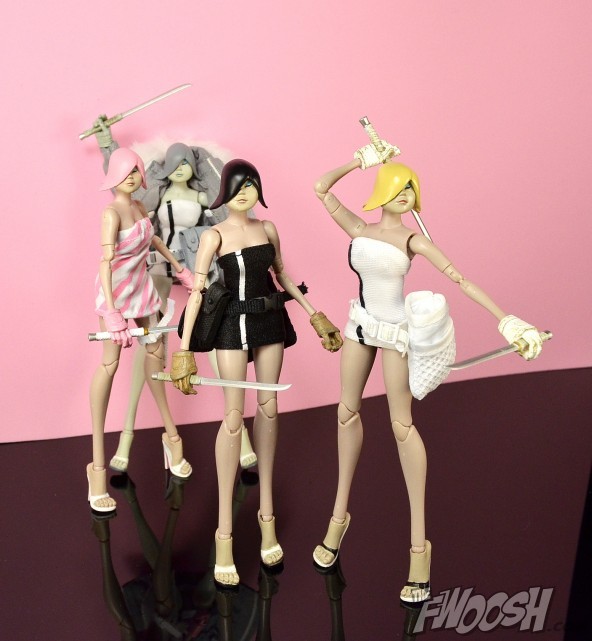 Each figure comes packing weapons, in most cases a small katana blade or two. It’s funny — without the swords, they feel like an assortment of weird fashion dolls, but once the swords are placed in hand, it totally changes the the figures’ dynamic. It’s kind of like in a Tarantino movie when the innocent-looking schoolgirl whips out some weapons and suddenly slays everyone in the room — that’s how I picture the Tomorrow Queens. The swords transform them into the typical 3A death dealers. 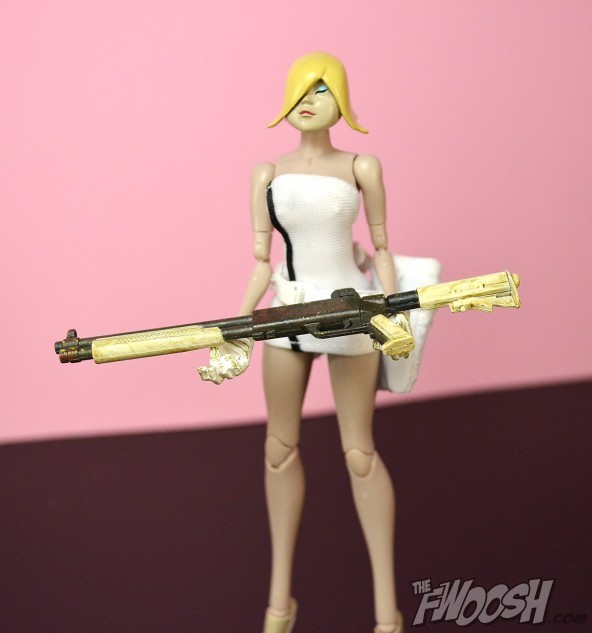 Vanilla Pod comes with a large rifle in addition to the sword, but … I haven’t found a way for to to properly hold the gun. The gun’s handle is quite large, much larger than the clearance her hands will allow. I know I’ve seen pics around the ‘net of her properly wielding the gun, but I’m reluctant to try too hard for fear of doing permanent damage to her hands. If you know a way to get her to hold the gun as intended, please let me know below. 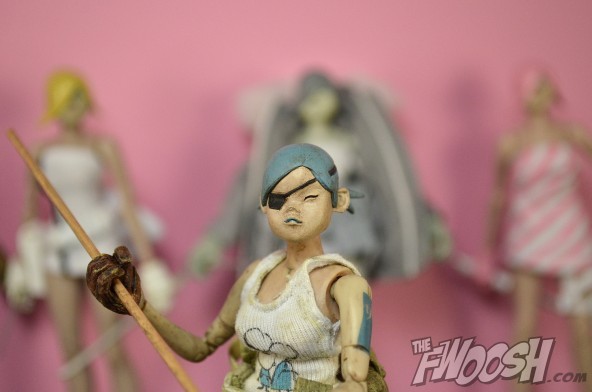 Queeny is the standout figure of the assortment for me because her look does appeal to me the most, but there really isn’t a single figure here I dislike. Queeny, though, is just a lot of fun to play around with and this 1/12 version does a remarkable job of replicating everything that’s cool about her 1/6 counterpart, right down to the thin layer of grit and grime that accentuates her appearance.

The only downside to my particular figure is that darn strap on her left shoulder. It insists on staying bunched up like it is in the above pic; it will not assume a natural-looking position. The tank top is made of a spandex-like stretchy material, but even when I tug on it and try to force it to reshape, it wants to go back to what it looks like in that pic. I guess this can just be written off to its being a drawback to the soft goods clothing created in this scale, but it still annoys me. 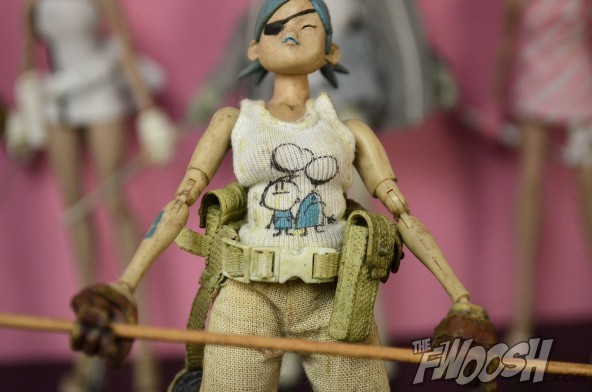 The design on her tank top is a darn near exact reproduction of the illustration on the 1/6 figure. I love that it’s two random, little cartoon characters with two blank word balloons over their heads. It lends itself to a sort of fill-in-the-blank possibility.

All of her bags and pouches actually hang much more naturally on her than they do any other 1/12 3A figure that I have in my collection. Whatever the designers are doing differently here, I hope they keep it up because it’s much more effective here than it has been in the past on the Grunts or on some of the Tomorrow Kings.

Queeny’s tattoo’s have also been recreated in this scale with a great deal of accuracy and care. Both of her tattoos look perfect, which really is an accomplishment for a figure in such a small scale. 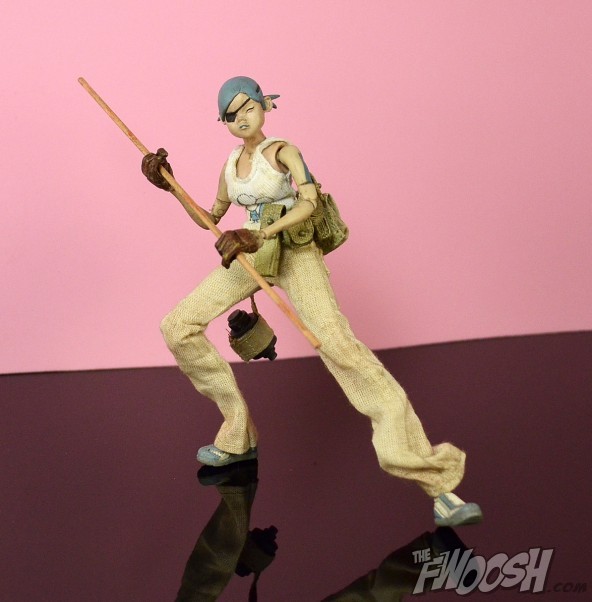 In terms of articulation, she is a highly articulated figure and it’s easy as pie to get her in all sorts of dynamic action poses. This goes for all the figures in the set, really, but for Queeny in particular because her feet lend themselves to better posing possibilities. The high-heeled feet of the other figures limit their posing range quite a bit due to balancing issues, but Queeny is an easy one to pose. You also don’t have to worry about her skirt riding up over her hips as you pose her thanks to her pants. (What a weird thing to have to write, but there you go.)

In addition to the sword, Lolli comes with a hand cannon that can be found strapped to her thigh.  It’s a neat touch that gives her more of a “Bond girl” sort of dynamic.

Now, The Tomorrow Queens, for the most part, are generally considered to be a bit on the risque side of things in general, but I think Hasbro’s Black cat from the Spider-Man Legends line has kind of “out-sexied” these figures. Black Cat’s proportions are much more realistic, and her “assets” are more pronounced. The Tomorrow Queen is a slightly better articulated figure, but because of the heels, she’s not any easier to pose than Black Cat is, so they both end up being stuck in very vanilla poses (if they’re to remain upright).

The grayscaled Interloper looks every bit as good as her sisters, but her coat limits her poseability greatly, at least it does on mine. The coat sleeves continually pull her arms out of socket when they’re moved, so she can’t do a whole lot more than what they’re doing in these pics. I love the grayscale look of this figure, though, so that makes me willing to overlook any articulation compromises the coat may be responsible for. 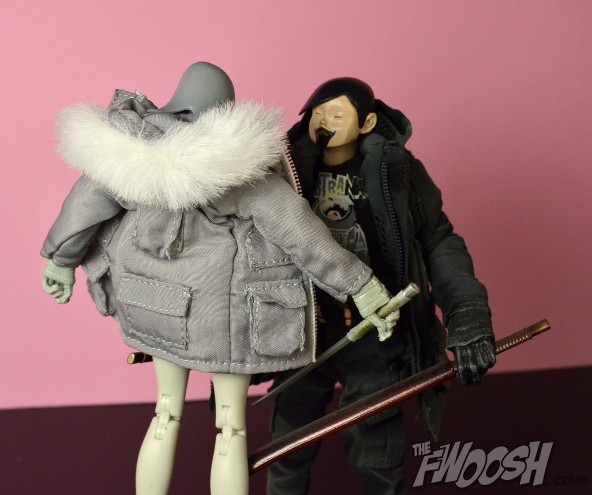 This is a fun set that I’m glad I was able to get. I wouldn’t say all five figures are absolutely essential for the collection, but I would recommend picking up at least Queeny because she is the most fun to play around with. As is often the case, this set was available to order on Bambaland months ago, so your only bet now is to hopefully get lucky on the secondary market. I think they’re worth the trouble, but your mileage may vary.