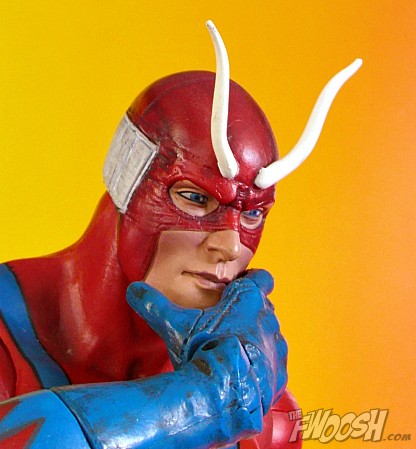 It’s a question I ask myself all too often. Standing in front of an overflowing WWE or Star Wars display, I find myself wondering why super-heroes always seem to get shorted in the toy aisle. Sure, you have token representation thanks to movie lines and kiddie product, but I’m talking about 6-inch-scaled, comic-accurate action figures. Here are the five answers to this question I hear the most, and my reactions to them. Now remember, folks: this is an editorial. I’m not spouting God’s truth or the company line here, I’m just tellin’ ya how ol’ Anthill sees it. Your mileage may vary.

In 1961, Decca Records passed on a shaggy young rock band because “guitar groups are on the way out.” The four guys in that band went on to comb their hair forwards and sell a bazillion records. While no one superhero product is a guaranteed success, as a genre it’s here to stay. So why are the pegs always empty? Sure, you can usually find dregs from the last big summer movie, but if you’re looking for the latest wave of Marvel Legends, odds are you’re going home empty-handed. That’s because there’s an (unwarranted) perception the trend has peaked. It seems like retailers would rather leave their shelves empty than keep product stocked — but is that really the case? It’s clear big box stores order conservatively to prevent getting stuck with unwanted toys, but what’s the point of allocating shelf space to something you’re going to sell-through in a week’s time? A better strategy would be order less “trendy” items (anyone want to buy 500 deeply discounted I Am T-Pain microphones? I didn’t think so…) and more of what people expect to find in the toy aisle: toys.

At retail, every dollar matters, no matter whose pocket it is in. But treating “kids and moms” as your target demographic when your product is historically aimed at niche collectors is self-sabotage. Today’s kids are some of the most informed consumers out there. They’re the first to know about the about newest game platform or expansion deck for their CCG. Unlike “Mom,” who depends almost exclusively on advertising to inform her purchasing decisions, kids learn about new products via a sophisticated network of peers, social networks and direct marketing. They already know what they want, so the odds of being talked out of it by a well-intentioned parent who remembers Superman is pretty unlikely. Toy manufacturers are unlikely to make any inroads here — better to focus on the hardcore collectors who blow up your website with questions, comments and threats. Like it or not, that is your base. Cater to it.

3. All kids want is Batman and Spider-Man.

Retail likes to hedge it’s bets, and who can blame ’em? After taking a gamble on Green Lantern and getting stuck with mountains of unwanted merchandise, big-box stores are reticent to gamble on unproven franchises. Two properties that have always done well for retailers are Batman and Spider-Man. In the 1970s they were the most popular characters Mego offered: from the 1990s on, they headlined their own toy lines. But a kid can only have so many Spider-Men before they lose interest, a fact both manufacturers and retailers don’t understand. Despite popular thinking, multiple versions of the main character drive interest down. Look at Iron Man: unlike Batman or Spidey, ol’ Shell-Head has a legitimate reason for having different costumes, and look at how many versions of him are currently warming the pegs. Toy companies need to understand that the characters they compete to make aren’t a license to print money. Resources need to go in before profit can come out, which means new tooling for new characters, play-sets, etc. Which leads us to…

4. Toy companies refuse to invest in the product.

If you consider the state of today’s 6-inch superhero offerings, you’ll be struck with an overwhelming sense of their cheapness. As a consumer, I’m disgusted at the minimal investment most companies make in their superhero lines. While Hasbro’s Star Wars Black Series figures receive all-new tooling, Marvel heroes are forced to share the same (often inappropriate) bodies. In Hasbro’s mind, it doesn’t matter that U.S. Agent is actually taller than Captain America — the smaller tooling is what’s available, so that’s what the figure gets. Honestly, I’m surprised that both Marvel and DC don’t take issue with the shoddy way in which it’s properties are handled. What was once sensible cost-cutting has morphed into a hack-and-slash mentality that has removed any innovation, imagination or fun these toys once generated. That segues into the real meat of the issue…

5. There is no longer “support” for 6-inch superheroes at retail.

Mattel has spouted this line for so long people have begun to take it as gospel — but why has it happened, and who is to blame? The reasons why are many: the ever-rising cost of petroleum, the changing face of the world economy, labor and materials shortages — that sort of thing. On a more myopic level there’s the poor character selection, nonsensical case-packs, and seemingly non-existent quality control practices. As far as the blame goes, obviously it was the toy companies themselves that killed the golden goose. Between pushing over-hyped movie merchandise to maximize profit for licensed lines, the cheap-jack practice of tool re-use, and cost-cutting measures that noticeably hurt the product, the blame can be lain squarely at their door. Thanks to these factors, plus a stunning inability to get their product consistently into stores, MattBro have managed to stall one of the fastest-growing consumer hobbies of the 21st century.

So what can we do? Well, we have to call upon the one super-power we all possess — the ability to adapt. Sadly, the days of the toy hunt may be behind us, but that’s not to say we can’t get our fix through the many wonderful online retailers that have sprung up to meet the needs of our hobby. New companies appear on the scene every day eager to compete for your dollars, and many of them are successfully acquiring the licenses to the characters we love so much. Give them your business and leave Walmart and Target to what they do best: selling socks and toilet paper.

Jason R Mink IS the Man in the Anthill!