Hi, it’s me. Yeah, you probably remember me and will still raise your eyebrows when you remember why you remember me. I am the guy that was that kid on the block growing up that never owned a Transformer figure. Yeah, you remember me now, don’t you? Go ahead and laugh again. I have heard it all before, but the fact is, Transformers never appealed to me as a kid. I have no idea why as it seems that every other action figure/toy property of the 1980s did, but if the other kids on the block were having a Transformers war, they needed to be prepared to have Batman come to the party, or Skeletor, or even Egon Spengler. Well, that is, of course, until they put Transformers in Happy Meals. That makes perfect sense, right? 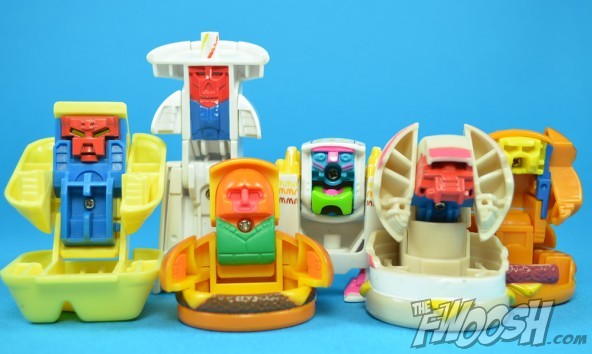 So not only did I not own any Transformers, I also never got to eat at McDonalds for most of my childhood. My mother was (and still is) a giant opponent of fast food joints, and it wasn’t until my brother and I started visiting our dad on the weekends did he start indulging us with those restaurant trips that were normally forbidden. So it was actually that forbidden fruit that lead to me getting some Transformers, and wouldn’t you know it — they were robots that transformed into McDonalds food products. Yep, the only transforming toys I ever had as a kid changed from a pack of McNuggets and a Quarterpounder to little robots reminiscent of the endearing robotic aliens from Batteries Not Included. Are you laughing again? Yeah, you are right to do so. But while I admit that, I still stand by the fact that those little transforming foodstuffs remain fun little toys.

Yes, taking a Fillet-O-Fish carton into battle against Megatron sounds ridiculous on its surface, but dammit, I made it work. Looking back on it, I am positive it was hilarious, but knowing what I know now, I would not change it for anything. Lo betide the Soundwave that will challenge my Egg McMuffin! It opens up a lot of questions now, starting with asking if these things were actually the sustaining ambrosia that kept the real Transformers going, or just little regular robots, but in the 1980s, there was nothing inherently weird about it, and even the guys that had armies of real “Robots in Disguise” had to have their famous fries too. The inherent kitsch quality of these was apparent then and endures today, and while I lost a lot of my beloved action figures over the years, I somehow managed to hold on to several of these, and from two different releases.

What I have here is some fries, a shake, a cheeseburger, a Quarterpounder (with robo-cheese!), McNuggets, and an Egg McMuffin. I know that there was also some fries in a red box and a Big Mac (at the very least) as well, so I need to check with my brother to see if he has those. If you look at the pictures, I have to ask how it would be humanly possible to not find these completely awesome, or, at the very least, nostalgically endearing. Sure, they are pretty basic with most of them featuring three transforming and movable parts, but I think they all pretty much nail what they were intended to be: a Transformers/McDonalds mash-up. Ain’t it grand?

They all resemble their ’80s McDonalds products rather flawlessly, and while the robotic forms are fairly simplistic, they are colorful and pretty cute to boot. Of this group, I think the Egg McMuffin is my favorite, followed closely by the McNuggets. The colors and forms are the most appealing to my eyes, and I think they are the two that I played with most as a kid too. Really, though, you cannot go wrong with any of these, and a quick check of eBay shows that most of them can be had for relatively cheap. 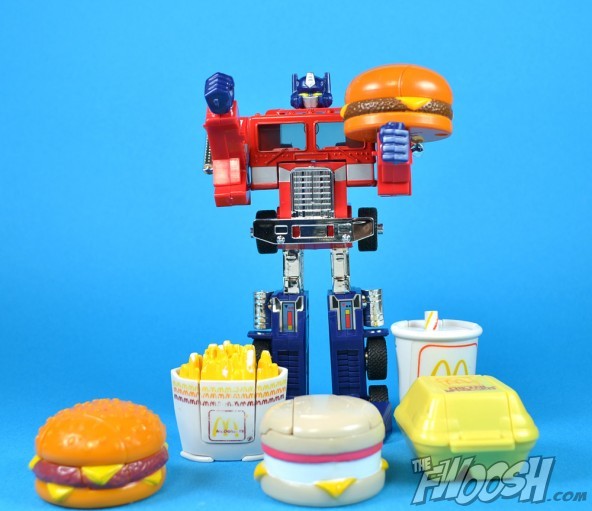 So what it says about me because these were the only Transformers I owned as kid can continue to be said because, frankly, I don’t care. I am unapologetic about my soft spot for these guys and thinking about how hilarious it must have been to watch me go into serious Transforms battles with them just steels my fondness for such a ridiculous concept. So bring on your Unicrons and Metroplexes — me and my McMuffin are ready for ya!