Fwoosh Sponsor BigBadToyStore has Gaming Heads latest release up for pre-order on their site. This is a statue of Talos from the Elder Scrolls series of games, some of you might be familiar with Skyrim. I’ve tried to play Skyrim but can’t get into it, Dark Souls has ruined me in the fantasy game realm. There are some good things about Skyrim, specifically the designs, some fantastic environment artwork and Talos is a good example of that. 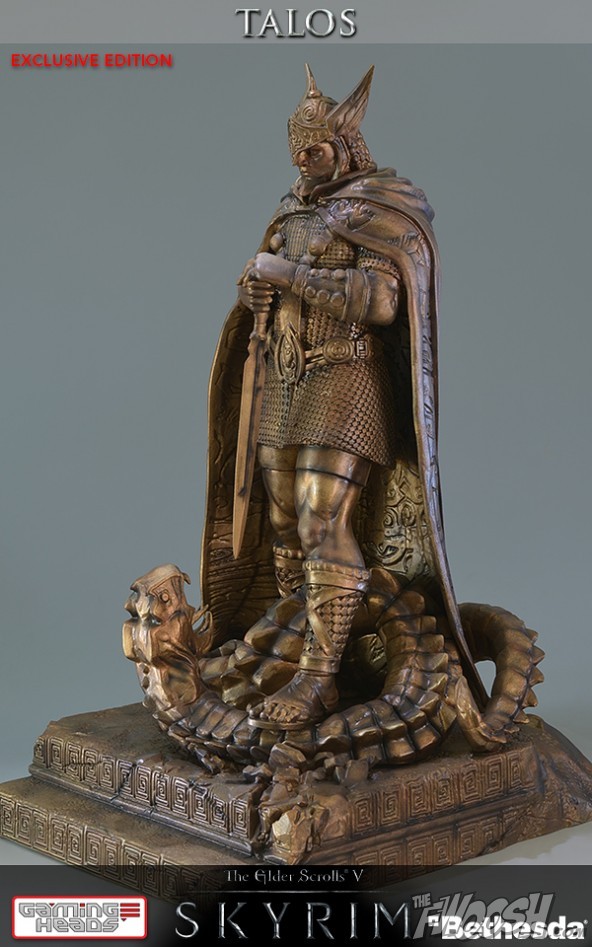 Gaming Heads statue stands 14 inches tall and is 1/6 scale. But that shouldn’t stop the Masters of the Universe Classics collectors or any 6 inch collector from buying this statue and incorporating it into a diorama or display. Hobbit, Lord of the Rings and Star Wars collectors might find an immediate use for it.

Talos, once known as Tiber Septim and Heir to the Seat of Sundered Kings, is the greatest hero-god of Mankind. He is worshiped throughout the land as the protector and patron of just rulership and civil society. Tiber Septim conquered all of Tamriel and began the Third Era, as well the Third Empire. Upon his death, he ascended to godhood as the God of War and Man. Worshipping at his shrine has been known to grant the Blessing of Talos and cure all common diseases.

There are limited number for sale, hurry up and get your orders in today.

You can pre-order this today at