One of the more pleasant surprises of IDW’s recent run of thoroughly excellent Transformers comics was opening Spotlight: Thundercracker and seeing Waspinator quietly lurking in the background among the Insecticons. For the unfamiliar, Waspinator is among the most beloved characters from the wonderful, and too often criminally overlooked, Beast Wars  series. Even though Beast Wars has some pretty strong ties to the Transformers G1 universe (and is basically an extension of it), Beast Wars characters do not often pop up in any Transformers fiction, so when they do, it’s kind of a big deal.

IDW should be commended, then, for including two fan-favorite Beast Wars characters, namely Waspinator and Rattrap, in the Robots in Disguise narrative, and it’s a pretty great thing to see — and it’s an even greater thing to see updated toys based on those characters. I know I wasn’t alone in my anticipation for this new Waspinator figure, so as soon as I got word that his wave was hitting, I hit the pavement on a mission to find him. Thankfully, I didn’t have to look very hard and I can now add this awesome figure to the permanent collection.

Waspinator’s packaging is consistent with what we’ve seen in the IDW Generations line, and it features a comic book with a custom cover for this Hasbro release. While the first two waves all came packed with each figure’s respective Spotlight issue, Waspinator comes packed with Robots in Disguise #19, an issue that features Waspinator prominently. It is so great to see Waspinator as an active character in current Transformers fiction, and it’s impossible to read the comic without hearing his very distinctive voice in my head as I read — instant warm fuzzies!

Waspinator’s colors pop like crazy and there is no denying that green — all three shades of it. Now, I always thought the original Beast Wars Waspinator was a pretty good figure, and I don’t even mean “good for its time.” Even by today’s standards, many of the Beast Wars figures still hold up. But seeing this new Waspinator in hand has made me very thankful Hasbro decided to take another crack at him because he is such a gorgeous figure. There is so much detail packed into this figure and he looks great from every angle. There’s also none of that “hollow” business here that’s been making Hasbro’s figures feel as though they may not be worth it anymore. And the head sculpt! We finally have a perfect Waspinator head sculpt. 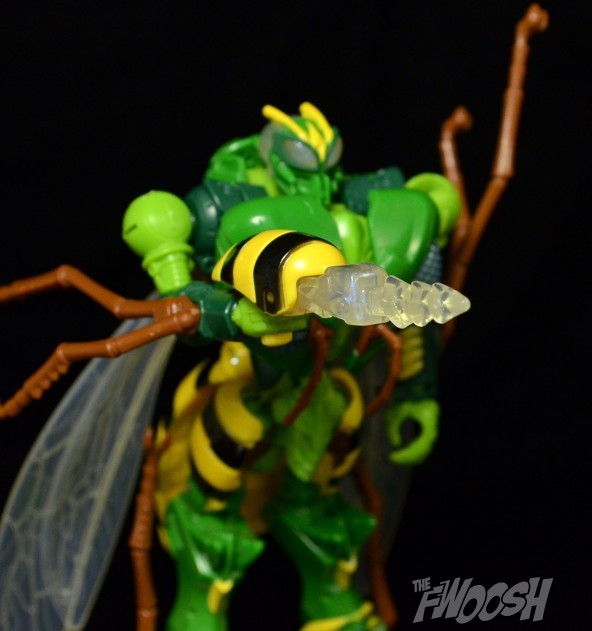 For accessories, he only comes with one — his signature stinger gun. It’s a nice update to the original gun with the actual stinger set in a nice-looking translucent plastic with an iridescent quality to it. It looks really cool.

The light-piping on his head actually works really well. His eyes light up nicely and easily, but I have to say I think I would have preferred their being painted in the same metallic blue his larger insect eyes are painted. I like the light-pipping and all, but I always thought the metallic blue added a lot of character to the original figure. I may pick up a second Waspinator just to try that to see how it looks. 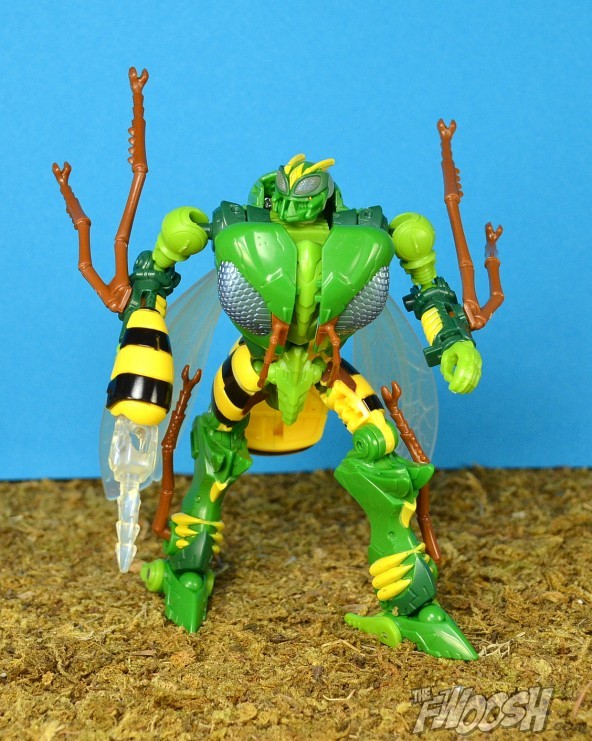 His robot mode has all the articulation we’ve some to expect from modern Transformers figures, so he can be put in a variety of action poses, or, in Waspinator’s case, “running away from danger” poses. His articulation breakdown in ‘bot mode goes something like this:

His insect mode isn’t as well articulated, but there’s an action feature that’s actually pretty cool — there’s a switch on his back that enables the wasp wings to “flap” as though in flight. It’s a cool effect and there’s nothing about it that gets in the way of his poseability — that’s how you do an action feature, so nice work, Hasbro.

His wasp mode is a nice update from the original, but there is still some kibble that hold it back from being a truly great alt-mode. For the most part, he looks great and I love the new wasp legs — they’re a huge improvement over what came before.

What’s holding the wasp mode back are his robot arms and legs. They don’t integrate into the insect form very well and cause him to look a bit more clunky and blocky than he should. His arms just sort of lock in at his sides with his hands plainly visible, and his legs just sort of fold up underneath him causing him to look very blocky. It’s not very elegant, but it’s … OK. You can see a great wasp mode in there, and it came so close to getting there, but it just didn’t quite get there and the compromises made do hold it back.

I used to think the Telemocha Waspinator (Takara’s Beast Wars 10th Anniversary Waspinator figure) was as good as it could ever get for Waspinator, but this new Hasbro IDW figure has it beat. There are still things I like about both figures, so I’m not about to get rid of my Telemocha or anything, but while I do prefer the new sculpt, the paint job of the Tememocha is still way better, I think. The metallic green is something I would have loved to see on the new figure, so I’m anxious to see how Takara’s IDW Waspinator will turn out. 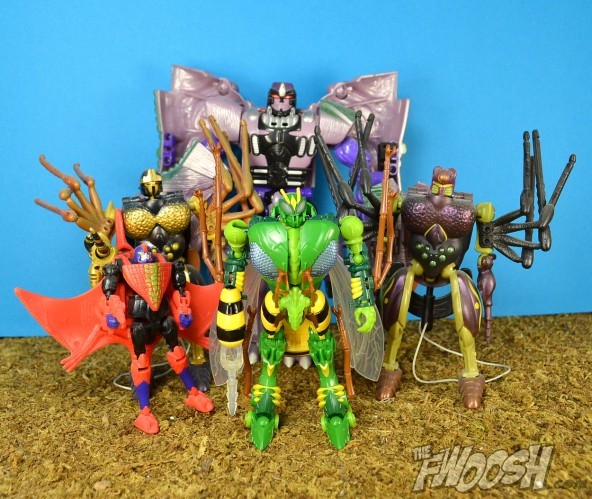 This Waspinator works well in both a current Generations collection and in a Beast Wars collection. The problem with putting him in a Beast Wars display, however, is he now highlights just how badly we need new versions of Terrorsaur, Blackarachnia, Tarantulas, Scorponok, Megatron, et al. So hopefully Hasbro has plans to update more Beast Wars characters. One can certainly hope. With the reveal of Rattrap yesterday, and Rhinox hitting right now along with Waspinator, it’s a good time to be a Beast Wars fan. 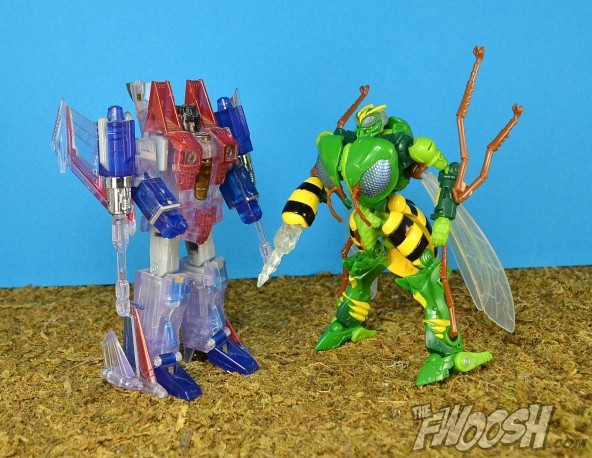 This wave has just started popping up at Target and Walmart stores within the past couple weeks. The prospect of getting a new Waspinator was incentive enough for me to go out on an actual toy hunt again — something I haven’t done in a long time, it seems. I found the wave without much trouble, but it was by no means hitting in large numbers yet. Most stores still had lots of figures from the previous waves taking up that valuable real estate on the pegs, so hopefully a nice holiday sale or two will help clear some space for this new wave.

If hunting at retail this time of year does not tickle your fancy, Fwoosh sponser Big Bad Toy Store has the wave available for preorder, so you needn’t even leave your couch to get your new, updated Waspinator figure.

Buy from BigBadToyStore (as part of a set)