Can you believe it? A new Rhinox! A good Rhinox! It’s finally happened!

Rhinox was the Beast Wars figure that has been in the most dire need of an update since his very first release. The original figure only bore a passing resemblance to the character on the series, so it never really felt … adequate. Even the 10th anniversary figure came up short despite having more accurate paint apps. This always felt like such an injustice because Rhinox was one of the coolest and one of the most fondly remembered characters from the show, so to look at the Beast Wars shelf and see what has passed for Rhinox for all this time has been a bit heartbreaking. For years it seemed Rhinox was the one we were going to have to write off as a loss and have to somehow embrace the figure Hasbro gave us all those years ago.

But Hasbro has finally corrected that situation by giving us the Rhinox we’ve been waiting for. 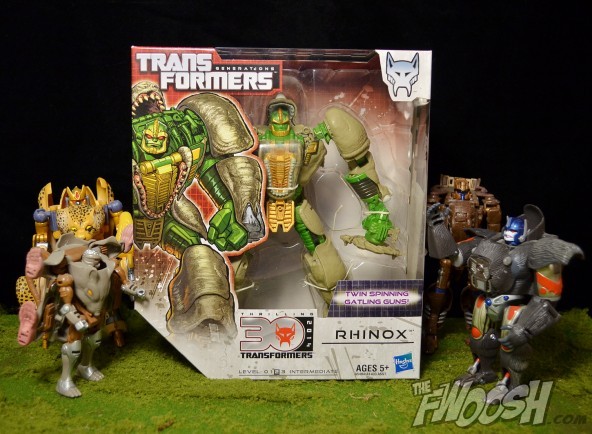 Hasbro has rectified the situation by releasing a Rhinox that is going to knock the socks off any Beast Wars fan. This guy is simply awesome, and it’s so great to see Hasbro go all-out on a character who is basically a fond memory for a very defined sect of Transformers fans. Rhinox hasn’t been in any of the Bay movies, he wasn’t in Transformers: Prime, and he hasn’t been in the current IDW comics. So he meets none of the usual requirements for a new figure with a unique mold. But Hasbro made him anyway, and for that, all I can do is gush in appreciation.

But because Hasbro did release him in such grand fashion, I can’t help but speculate that Hasbro and IDW have something in store for him, especially since fellow Beast Wars alumns Waspinator and Rattrap have been featured in the comics, so safe money says Rhinox will be joining those two soon in at least one current IDW series. We’ll see.

His packaging is the same “Thrilling 30” voyager packaging we first saw with Springer and Blitzwing. It’s clean and shows off the figure nicely. And it’s awesome to see the Maximal logo where we would normally see the Autobot or Decepticaon logo. I get all giddy just looking at it. 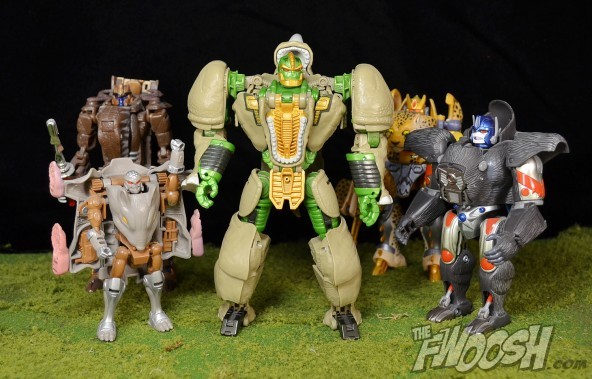 He blends in with the older Maximals well enough, but since he’s so new, and features all the advantages that would imply, he mainly makes me want updated versions of all the season 1 Maximals. Rattrap is on the way in 2014, and we — technically — got updates of Dinobot and Cheetor a few years ago, but that Cheetor is easily one of the worst figures Hasbro has ever released, so we need a new one — badly — to go toe-to-toe with Rhinox here in the awesome department.

Rhinox is a formidable figure. He’s got all the size and mass he should have, and the rhino kibble is minimal — most of it nicely integrates with his overall robot design. The rhino head on his back and the size of his ‘bot legs may be the only aspects to point to as areas for improvement, but even they’re not terrible, and they take very little away from this figure. This is simply the Rhinox that should have been released from the get-go, rather than the deluxe-class one we got. 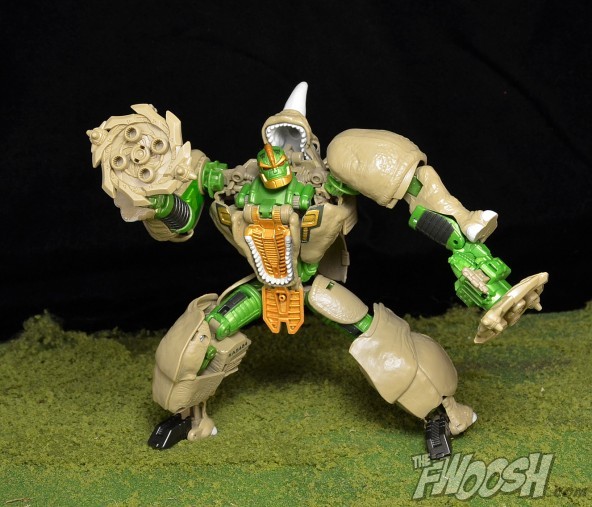 He’s well articulated for a voyager figure and can be posed in a wide array of action poses. And I love that his head is on a ball joint — it allows him a very decent range of motion in his head, which adds a lot to the dramatic effect of action posing. Too often Transformers figures have just a swivel head, so Rhinox’s ball joint is most welcome.

Now, some of his joints are a little bit on the loose side, particularly his hip and shoulder joints. They’re not “floppy” or anything, but they’re not ratchet joints and they don’t feel as tight as they perhaps should. He can still hold a pose, but your mileage may vary here in terms of how loose or tight your figure’s joints are. 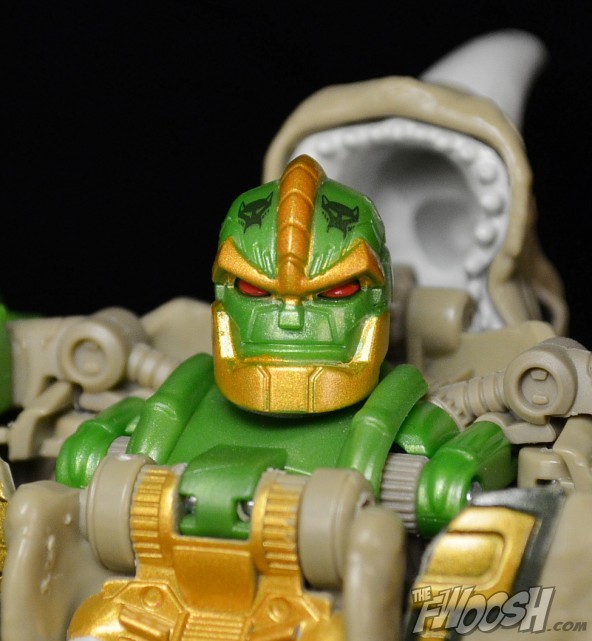 His head sculpt is spot-on perfect. And it’s darn near amazing to see they even included the Maximal logos on his head on either side of his “Mohawk.” The facial expression they gave him is perfect too — it exudes all the quiet intensity Rhinox should convey.

The icing on the cake here is his twin Gatling guns. This is what was first teased long ago, and fans went bonkers at the prospect of finally getting a new Rhinox. His action feature is housed in these guns as each has a lever that can be pressed that sends the barrels into a spinning motion, similar to what we’d see on the show when he was blasting Predacon-butt back to Cybertron. The levers aren’t obtrusive at all, so Hasbro outdid themselves here. My only crit is I would have liked to see them painted in more show-accurate colors with some sliver and green, but I’m certainly not unhappy with what we got. I’m anxious to see if the Takara release includes these paint apps on his guns — that alone may make it worth a purchase.

I have no idea what I’m going to do with my 10th-Anniversary Rhinox now that this guy is here. It’s painful to even look at him. I mean, that figure was never even good for its time, and now this new Rhinox has made it completely irrelevant.

Takara’s Henkei Dinobot was one that I used to consider a pretty good updated Beast Wars figure, but now that it’s clear that voyager-class Beast Wars figures are a possibility, a new voyager Dinobot would be a fantastic follow-up to Rhinox. He needs to share Rhinox’s girth. 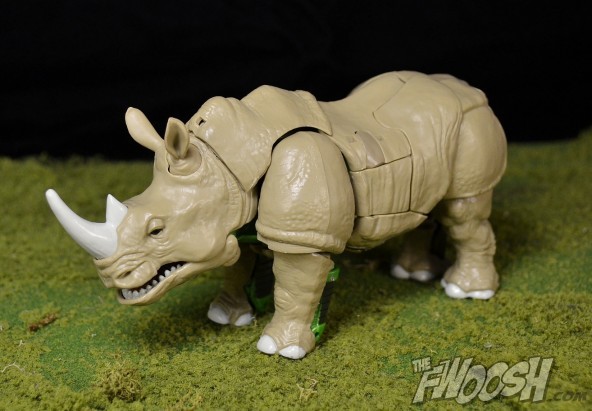 The rhino mode is almost as beautiful as his ‘bot mode, and it’s certainly miles better than what came before. It’s probably the best we can expect from a plastic toy meant to emulate rhino flesh before we get into the realm of rubber overlays. It’s mostly a nice, smooth sculpt and does a decent job of not looking like a jigsaw puzzle. Considering how good his ‘bot mode looks, I thought for sure the rhino mode would suffer for it, but nope — it’s almost as solid in its own right.

The only drawbacks are the small bits of green ‘bot parts that are visible, mainly near his rhino feet. Except for that, this rhino mode is solid.

There isn’t a whole lot of articulation in this mode, unfortunately, but his legs do move and can be made to look like he’s walking or running. His head doesn’t move much, however. Only his jaw moves — it can open and close in an almost natural-looking fashion.

The good news is rhinos aren’t known for their dexterity in the jungle, so Rhinox can do whatever a rhino needs to do. Both modes look awesome, but the ‘bot mode is probably the shining star of the two.

And when comparing the two rhino modes … I’ll let the pictures do the talking.

This figure is a very welcome addition to any Transformers collection, and he looks pretty darn excellent in a Beast Wars display. He should be hitting toy shelves at all the major retailers any time now, so do yourself a favor and buy on sight — you will not regret it.