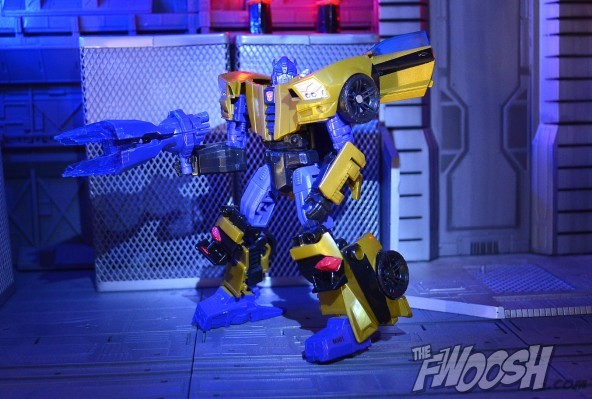 Way back in the G1 days, a damaged Bumblebee (the cause/source of the damage will vary from comic to cartoon) was rebuilt into “Goldbug,” a souped-up, more formidable version of Bumblebee. Goldbug never attained the same level of popularity the original Bumblebee enjoyed because the focus shifted to other characters by the time Goldbug popped up, but due to his rebuild and rebranding, Bumblebee would be one of the few Transformers characters to survive the G1 days after Hasbro made the decision to “clean house.”

Similarly, a badly damaged Bumblebee collapsed in Robots in Disguise #18 and underwent a rebuild that transformed him into what looks like an entirely new character. The finished product is still called “Bumblebee” in the comic, with the name “Goldfire” stemming from the material used for his new shell. I imagine Hasbro had intended to name this new iteration “Goldbug” as well, but had to go with Goldfire as a compromise due to rights issues. And if that is the case, then I can’t help but wonder why they didn’t just stick with “Bumblebee” since his name didn’t change in the IDW comics and that’s the character the figure is based on. Maybe they were worried about confusing kids? That’s my only guess.

Goldfire’s packaging is consistent with the other “Thrilling 30”  Generations deluxe figures. He comes packed with an issue of Robots in Disguise featuring a new, custom cover. The issue gives a little background information about the character, which should answer any questions about the character anyone who isn’t already familiar with the comic may have. Since many of these new Generations figures are based on characters and versions of characters that come straight from the current comics, including an issue of the comic is a great strategy to keep fans in the loop who may otherwise be familiar with just the G1 cartoon or Bay movies. 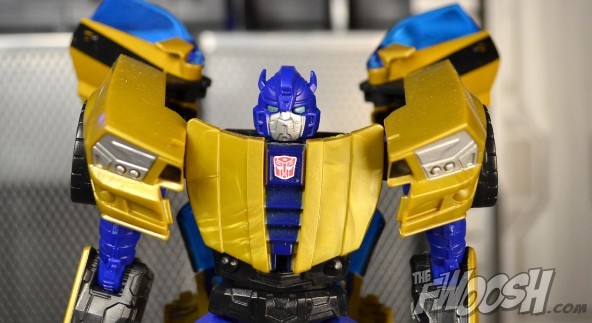 We saw this mold used once before for the Bumblebee figure from the first wave. That figure was based on Bumblebee’s look from the 2009 series, simply titled The Transformers, so when Bumblebee needed the rebuild in Robots in Disguise, it was that model they went back to. The mold works better for Goldbug than it does Bumblebee since it’s a more imposing ‘bot in general. Bumblebee has traditionally been depicted as friendly and approachable, but this guy looks like a warrior.

The only thing really new here is the head sculpt, and it’s a terrific likeness to his new head in the comics. Bumblebee now sports a shield over his mouth, which in itself makes him look like a tougher ‘bot.

The Bumblebee from the first wave was a pretty terrible figure with cheap-feeling plastic and awkward articulation, but somehow this figure feels like a better figure even though virtually nothing is different. The gold plastic looks worlds better, and the combination of that gold with the blue and black looks awesome. So any “improvement” may simply be cosmetic at its core, but somehow it feels like it’s enough to justify the purchase. I wasn’t a fan of that first Bumblebee, but I really like this guy a lot more. I guess it all comes down to the deco, but somehow it feels as though there’s more to it than that.

Like the previous release, this version of Bumblebee comes with two blasters that can be combined into one more powerful weapon. A little bit of paint would have been appreciated here since it’s just a bunch of molded blue plastic — both he gun itself and the translucent “blast” effects. This is probably the only thing the first Bumblebee did better.

A quick side-by-side comparison of the two Generations “Thrilling 30” figures highlights their differences nicely. As mentioned earlier, aside from their heads, there really isn’t much here that’s different, but the simple changes in paint deco make Goldfire look to be the better figure.

On the right we see a more traditional rendition of Goldbug using the Takara United Bumblebee with the custom head Renderform created for the figure. This one is closer in appearance to the original G1 Throttlebot Goldbug, so it’s kind of cool to see something of an evolution for the character. There have been many, many Bumblebee figures released over the years, so it’s cool to see Goldbug/fire get some attention too. 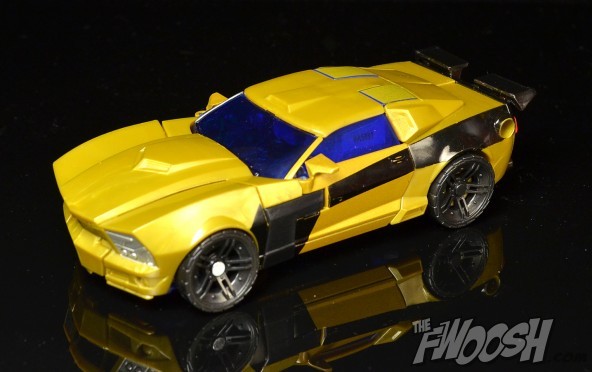 Goldfire’s alt mode is, again, identical to Bumblebee’s in all aspects apart from the deco. The gold plastic used here makes for a better-looking car all around, although the black stripes that wrap around the car look a little odd to me. Ever since the first Bay movie came out, it seems every version of Bumblebee needs to have bold, black stripes, and while it often looks good on the Bay Camero, here it isn’t as successful. I can’t help but think the alt mode would look better without it, or maybe it would look better if the placement were different.

It’s also interesting to note that Goldfire’s gold-blue-black deco in ‘bot mode is preserved in his alt mode by way of the dark blue windows. It’s a weird choice of color for windows, but I think it looks really cool and adds a lot to the alt mode in general.

Goldfire/Goldbug/Bumblebee/whatever you want to call him at this point, is part of 2014’s first Generations deluxe wave, but the wave actually first touched down at US retail a few weeks ago in early December. The wave may be tough to find at the moment, given it’s currently the retail dead zone of the week after Christmas, but once all the stores do their resets in January, this wave should be around in fair abundance.

Of the two figures released using this mold, Goldfire here is the one to get. If you’re not familiar with this look or the character, then make sure you crack open that comic he comes with so you’re able to gain some context.