The only good thing about Mondays is the fact that toy news kicks back into gear after the cold desolation of the weekend. Otherwise, it’s going back to work or school. Ugh. Having to get into publicly appropriate clothing and leave the house. Ugh. Dealing with traffic and commutes. UGH. It’s especially bad this time of year. Stay home people, where it’s safe! Refrigerators and the internet, you don’t need anything else! Except, you know, actual human interaction. Bah, no, who needs that? Belly up here at the Fwoosh, it’s Happy Hour!

VeeBee will have his First Look at Hydron tomorrow but he sent me some teasers to dangle before you, the Fwoosh Faithful.

I have already admitted the fact that I don’t know a single thing about New Adventures but Hydron looks like a nice figure. There are not nearly enough underwater characters in the MOTU universe. Tune into Fwoosh first thing tomorrow for the First Look!

BigBadToyStore just put up a preorder for Figma Indiana Jones!

Is it just me or are the eyes pointing straight ahead in a couple of the pics while pointing to his right in the others? Edit: Our very own themanintheanthill confirmed an alternate head in a previous article. My memory, it’s getting worse as I get older. Check it out for larger pics!

Either way, a good looking, well articulated Indiana Jones figure? Hot dawg! There have been figures of June-yah before but this is the first that has made me sit up and go “Yes, I need that. It will be mine.” I only hope that this is 6 inch scale, but even if it’s not I still must have it.

From the BBTS description: The figure will include a whip, gun, Golden Idol form Raiders of the Lost Ark, Sankara Stone from The Temple of Doom and the Holy Grail from The Last Crusade.

Oh, you know what I’m about to say. You want to say it too. Say it with me. “Where is the Ark of the Covenant?” I’ll probably hunt down an appropriately sized crate.

Pop over to BigBadToyStore’s preorder page to snag what will most likely be the only Indy you will ever need. Unless you collect other scales. Then, um, move along, nothing to see here.

Diamond Select announced on their Facebook page that Marvel Select Jane Foster will be arriving this Wednesday. They also posted a few new pictures.

Now, I’ve read a LOT of hate for this figure on the forums and elsewhere. But at the same time, I’ve also read a LOT of threads about wanting civilian characters. I don’t know who to believe, I’m so confused. And I can’t imagine how it feels to work for a toy company, making decisions that could potentially bring backlashes worse than a “Playstation versus Xbox” YouTube video. I shudder. But good choice or bad choice, it’s a bold choice. I rarely play the “We could have gotten ______________” game. I’m more of a “I’m not interested, next!” kinda guy.

Saying that, I may just pick Jane up to go with Thor. There is a resemblance to Portman in the shots in front of the rocks. And be honest, when was the last time you saw an action figure that looked exactly like an actor? Not often unless the package says “Hot Toys” which means you’re paying a premium price for that likeness. So let’s cut Diamond some slack, both on the likeness and the decision.

I look forward to a lot of Jane upskirts in the near future. No, you perv, I want to see what the articulation is like. I usually don’t get to pick up toys until everyone else has theirs. Mind out of the gutter! 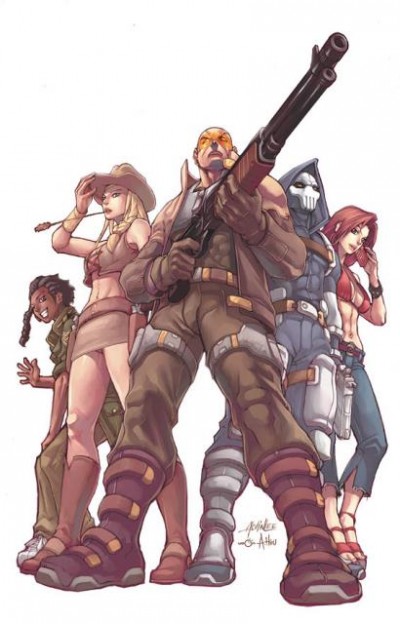 Agent X. The Firefly of my comic universe. Revival? Yes, please! Action figures? YES, PLEASE! Ever going to happen? Not in my lifetime.