It’s Saturday. Not a lot goes on. We’re all doing our weekend thing. Family, fun, open some toys we may have picked up. That’s what I do anyway. If I’ve been hunting something down for a while I’ll usually open it right away. But if it’s a figure I just randomly pick up I’ll wait for a lazy weekend or a rainy day. This weekend is both. Five inches of snow and nothing to do. So let’s see what Robo almost broke! Belly up to the Fwoosh bar, it’s Happy Hour!

I picked up the Teenage Mutant Ninja Turtles Classics Rocksteady the Saturday after Black Friday. He was all alone on the pegs, nothing else TMNT in sight. I have been wanting both him and Bebop, and while Bebop was missing I went ahead and picked up Rocksteady. And then proceeded to forget about him. There has been talk on the forum about his shins being backwards and that combined with it being the aforementioned lazy Saturday I went ahead and cracked him open.

As you can kinda see in VeeBee’s review of Rocksteady and Bebop, the shins are in fact backwards. Look at your own shins. The front is flat, the back curves out and then back in at the ankle. Well, depending on your physique. 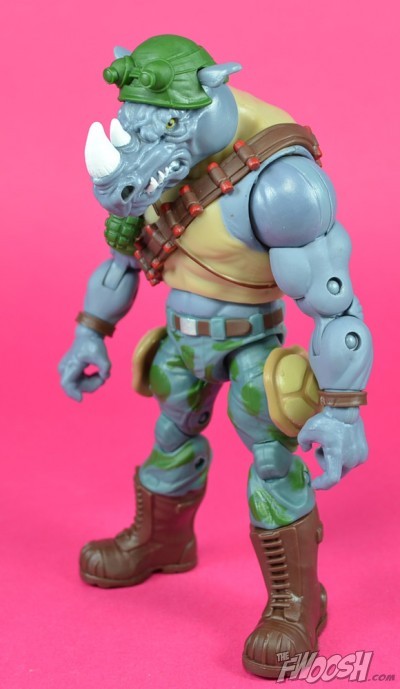 The fix is fairly simple. Heat the legs with whatever method you prefer. Boiling water, hair dryer, heat gun. The boots are easy to pop off. The trouble comes at the lower knee, where the pin is a hard plastic. You want to be very careful when prying one side off the pin, and even more careful when pulling it off. I warped the pin on one side while trying to get the shin off but was careful when putting it back on and it worked fine. You also don’t have to pop both sides of the pin off. Just one side, then stretch the softer plastic of the outside shin down and out. Reverse the shin, pop the boots back on, Blob’s your uncle. 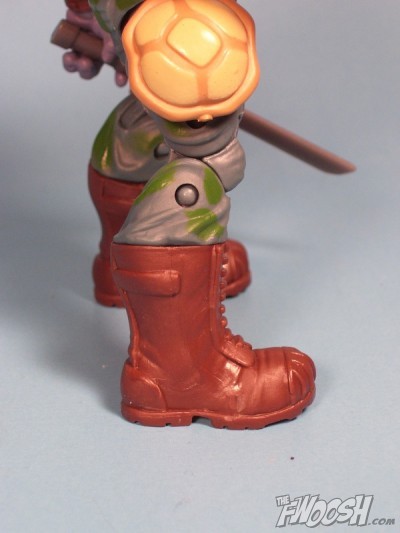 Not only does this look better it also makes Rocksteady stand much better. Straight out of the package he has a tendency to lean and fall backwards unless you lock his knees completely straight, and even then he’s iffy. After the fix his stance and balance is 100 times better. So, break out your heat sources and get popping!

Franky didn’t give a source for the pics, so if you know from whence they came throw a comment down and I’ll give credit where credit is due.

The figures look nice. I have a few PAK figures and I love the ones I have but they have not been without their faults. A weird shoulder here, a wrong foot there. And don’t get me started on scale issues. But that’s mostly line to line and not within the same line, so your mileage may vary. Larger scale figures are not my forté so I tend to mix them all together.

You may have missed our article on the Captain America Legends Infinite being on Ebay from earlier in the week. The figures slipping out of Hong Kong means they are bound for US shores soon! I’m incredibly excited about this. Between this and the Spider-Man line it looks like I’m back fullbore into Marvel Legends again. Which is odd since I’ve also gravitated back toward Marvel comics after years of defecting to the DC side. I’m trendy, apparently. Anyway, the same seller has put up a new batch. Let’s see how high these go! Last batch, Zemo ended at $78 while the A.I.M. Soldier and Red Skull followed at $77 and $65, respectively.

Finally, I ran across this today on the Super Podcasto Magnifico! Facebook page, with the caption “What the American Hustle movie poster looks like to regular people and what it looks like to comic fans. -Juan Daeho” 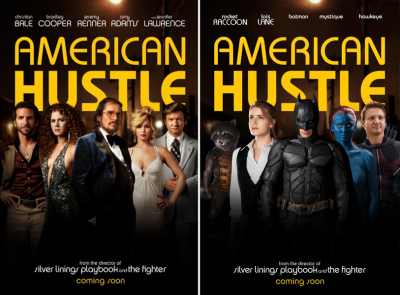 Ain’t that the truth.

My lazy Saturday must continue. I’ve got to go play Grand Theft Auto V with Prodigy and some other cool guys. Speaking of that, GTAV is down to $39.99 on Amazon. If you have it on the PS3 look me up, I’m RoboKillah there too. That’s all for today folks! Happy Hour’s over!