The door closed softly and they were gone.

From his place on the bed, the patient could hear them speaking in the room beyond. He recognized the deep, even voice of the doctor, followed by the softer tones of his wife. And while he could not make out their words, the patient knew he was the subject of their conversation. It wouldn’t be long now, he understood. His time had finally come.

The patient studied the room by the dim light of the single lamp. It was almost unrecognizable to him now. Where was the bed he and his wife had long shared? Where were the reminders of his life before the accident? He did not know; all he could see was the sterile white and polished chrome of the hospital equipment, the tubes and wires that monitored his vital signs, the pump that forced fresh oxygen into his lungs. He watched the valves open and close, followed the rhythmic, almost hypnotic rise and fall of the plastic accordion within.

Far in the distance a door closed. Moments later came the sound of a car starting, then slowly pulling away from the house. That would be the doctor; he knew there was nothing more the man could do. The patient did not begrudge him this. He’d lived with his condition for too long to harbor resentment. Medical science had prolonged his life far past its natural end — no sense in taking issue with it now. As if on cue, the IV began its hourly cycle, pumping powerful anti-pain medication into his veins. In spite of his desire to remain awake, the patient found himself drifting off into the now-familiar chemically induced twilight that had come to define his waning days.

How long he drifted he could not say. The clock had been removed from the bedside long ago; in its place sat an assemblage of pill bottles, vials, and sterile plastic-wrapped needles. He viewed them through half-lidded eyes, wished he had the ability to reach out and read the labels. He’d never liked drugs and hated the fact that he’d been under their sway for so long. Time was the only medicine he needed.

In spite of the light beside him, the room seemed to grow shadowed before the patient’s eyes. Was this it? Was he finally dying? The darkness doubled, then was abruptly muted by a new light. It appeared in the air before him: a warm, lambent glow that he could feel as much as see. He forced his dry throat to swallow, tried to make some sound to indicate to those beyond the door now was the time to say their final goodbyes, but his broken body did not respond. He could only stare into the now-blinding corona that filled the space in front of his bedside.

Then something stepped out. 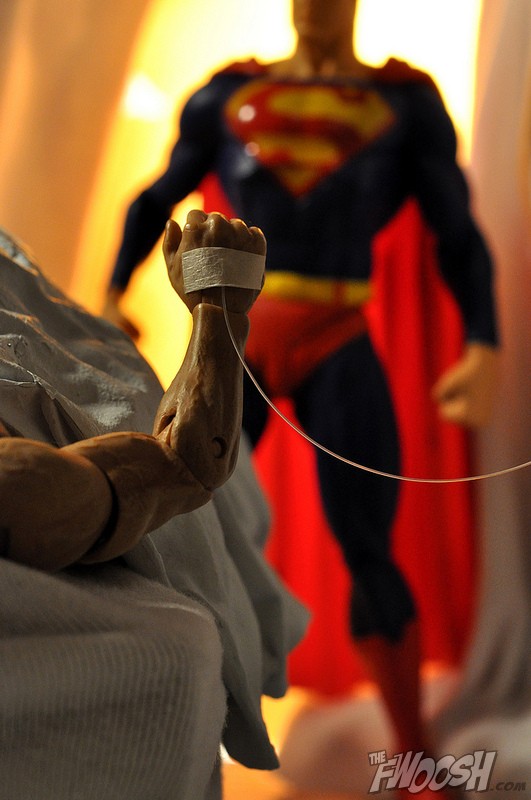 The figure was tall and broad, boldly silhouetted by the dazzling glow. If this was an angel, it was a strange one; lacking wings, it instead had a long, flowing cape. It had no halo to speak of, only a head of short-cropped blue-black hair. In its hands it held a small, glowing shard of the deepest green.

The voice was his own. Older perhaps, richer in tone and timbre, but the patient knew it instantly. The light diminished then, folded back into itself leaving nothing behind but this strange visitor. The patient noted the once-familiar uniform: the large triangular “S” shield upon the chest, the red leather of the calf-high boots, the piercing blue of the eyes. The patient attempted to rise, but the visitor lifted his hands.

His own voice surprised him, a whisper of it’s former self. The visitor smiled.

The visitor held the crystal aloft. Within, seas of emerald fire burned, as a planet trembled and exploded, as its sole survivor rocketed to safety in an impossibly-graceful craft, as the infinite seas of space parted to allow the tiny ship passage.

The visitor nodded, his face bathed in the green light. The patient watched as the ship passed into darkness, growing indistinct as it accelerated. It streaked from one solar system to another, seeking it’s distant destination. In time, a speck of brightness grew, became a blazing red-yellow star that reached for the ship. Impossibly, the small craft resisted the great orb’s pull, tearing past it and continuing on to a tiny planet at it’s outer rim.

The patient attempted to rise, to react to this impossibility before him. The visitor placed a large but gentle hand upon his chest.

He tucked the crystal into his cape. For long moments the visitor simply gazed at the bed-ridden man before him, at the bank of machines winking silently in the shadows.

The patient licked his cracked lips, blinked upwards at the vision before him.

The patient laughed, for the first time in what seemed like ages. The effort provoked a dry, rasping cough that shook his feeble frame. Concerned, the visitor offered him a nearby glass of water and the patient slowly sipped it through a plastic straw.

The visitor furrowed his brow.

“It hasn’t been easy, I know. But you can’t give up. You have to find the strength to take one final leap.”

The patient looked at his visitor, at the IV in his arm.

“This stuff … never made me … hallucinate before.”

“It’s strange, I know. But I’m not a hallucination. I’m here because you have done amazing things. In spite of your hardships, in spite of the suffering and misery, you never once stopped fighting. You’ve inspired countless people by your example. You have honored the legacy.”

The patient looked at his visitor, then turned his eyes away.

The visitor nodded, then sat down in the chair beside the bed. In the lamplight the patient studied the strong jawline, the knitted brow, the single spit curl that fell across his forehead. The man certainly looked real. He turned to the patient.

“It’s hard to believe, I know. But there’s more to this than we see. Think of it this way. Life is … possibility, is potential. In this world, I’m merely an ideal, a representation of the good that anyone is capable of. I become real when a man stands up to injustice. I’m real when a woman fights to protect the innocent. I’m real when a child dreams of having the power to make the world a better place. I exist here.”

A hand reached out and touched his brow. It was like being struck by lightning, only repeatedly. A thousand thoughts came to him then, images, impressions, understanding beyond all that he had previously known. The visitor arrived again and again, his origin embellished by countless hands. The patient watched the adventure unfold, following it to the end only to see it constantly reset. Powers were discovered and lost, truths were learned and forgotten, the history growing more faceted and nuanced with each retelling before being obliterated in the blazing white heat of need. And the visitor’s face changed each time, ever familiar and yet constantly different. The patient noticed his own, watched it grow and change into countless others, minute variations on an eternal theme. There was victory and glory, failure and redemption, a never-ending battle to discover the limits of humanity and depth of sacrifice. And then it ended, the light dimming to a soft glow.

The patient blinked, stared up at the man before him.

“But why me?” the patient asked, unsure. His visitor smiled again.

The visitor extended his hand. The patient found himself reaching out, clasping it with a strength he had not known in years. Without help he stood, leaving behind the shell that had long contained him. He looked down at the bed, at the body that was even now dropping into a coma.

“Where are we going?” he asked. The visitor smiled again, the passageway reopening behind him.

Together, they stepped into the light.