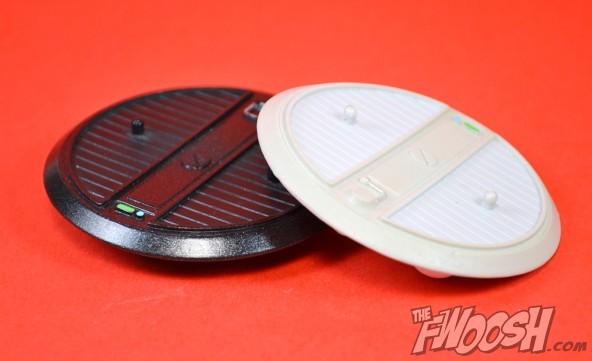 In this humble toy fan’s personal opinion, one of the most exciting things about collecting action figures right now is that there is a HUGE breadth of talent coming from the DIY and independent sect. There are lots of guys like Alvis Underground, Working Class Villains, He-Mike, Spy Monkey, Zoloworld, Kevin Kosse, Zombihamma, Alessandra Fucarino, Dr. Rampageo and others who are producing amazing products right now that span the range of add-ons and conversion kits to full-blown lines. Well, Joe Amaro has been at it for longer than most, and while he lends his amazing talent to a lot of official toy lines, he is still running at the forefront of the DIY projects as well. His Manta Raider and Tytus Hammer have been runaway successes, and I love just watching him make all kinds of things, like that insane Filmation Attack Trak. Well, Joe is back and he has brought some pretty amazing new additions — the Hover Disks! 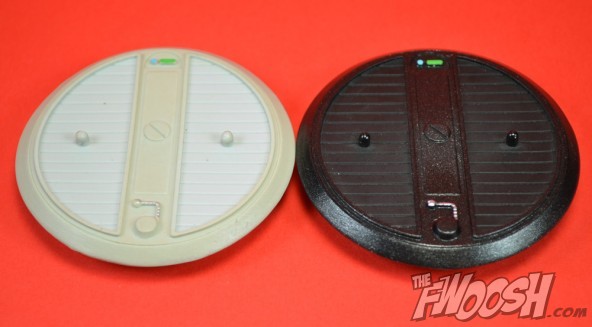 We are in an age where getting vehicles for 1:12 action figures doesn’t happen very often. It is sad, but it’s just a part of today’s climate. Sure, occasionally there is a Wind Raider or Speeder Bike (coming soon), but we have far too many action figures running around right now. And they are running because they ain’t got no ride! Well fear not, MOTUs, Star Warsers, superheroes, and the like, you are about to be able to (figuratively) fly through the air with the greatest of ease!

Joe has created a pair of Hover Disks (one black, one grey) in the first part of the his new vehicle initiative. Simple yet wonderfully effective, these disks can be used across any number of lines for anyone from Spider-Man to Skeletor. I know a lot of people have been chomping at the bit over these babies, but they are finally going on sale tonight, so DO NOT delay in placing your order. They are bound to go fast and I can tell you right now, you will not be disappointed.

The design, while sleek and simple, is perfectly realized in these disks. It is not the acute detail that can make or break a thing like this, it is the geometry and perfect shape and clean lines that sell it. Everything from the sculpt to the cast to the paint is done at such a professional level, and I love how it all comes together in clean precision. While the sculpting talent is undeniable, there is a difference when creating an amazing one-off sculpt. It is quite something else to be able to create a great sculpt and then reproduce it on a relatively mass-scale. While I don’t think the production numbers have been revealed, these are as top-of-the-line as it gets.

But do they look at all familiar to you? I am not going to come right out and say it, but these bear a striking resemblance to what the centurion troops of a certain bone-faced despot from a certain universe mastering movie ride around on. Ooooooh, right! Now you see it, right? Well, since the company that could potentially make such things does not have rights to do so, these will foot the bill perfectly if you are looking for something similar. Because it is just a similarity, not a recreation, and while these certainly look fantastic with your MOTU figures, just about any line can be a lot cooler with them.

As you can see in the pictures, He-Man can certainly engage in an aerial dogfight with Skeletor, but Greedo (and the Sandtroopers, for that matter) and Spiderman show that they can get in on the action as well. I do think the MOTU and SW guys look the best on these of all of the lines that I have tried, but it seems to me like the Toy Biz ML figures have the foot peg holes that fit the most snug on the pegs. Spider-Man locks right in and you have to actually give it a little effort to get him off. That is not to say that the disks don’t stay well on the others, they do, but the ML peg holes must be just slightly smaller to keep them firmly afoot.

While there is not a lot of paint on these, what is there is perfectly clean and very effective. I really love the metallic black used on that version and it really helps to bring it all together for a convincing effect of an electronic air ride. The silver cord and green and blue indicators are the only other colors used on these, but again, it works really well. These are supposed to be sophisticated pieces of equipment, and two small indicators that you check at your feet while whizzing through the air are all you need. I am often of the “keep it simple, stupid” mindset, and the paint is used to accentuate the sculpted piece, not to overtake it. 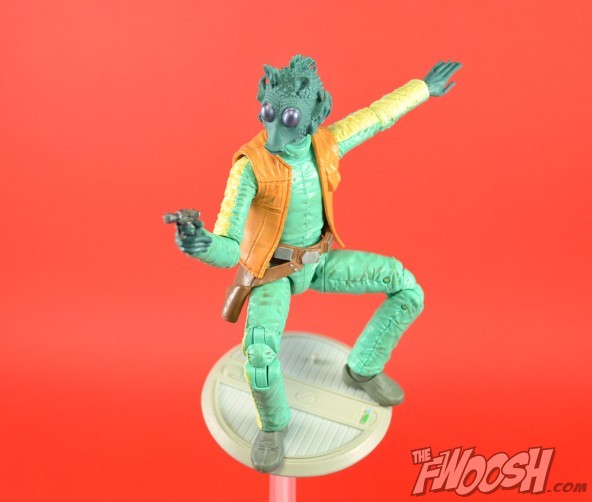 The bottom has three balancing domes and three thrusters. The domes provide great stability, so if you are not going to hang your figure from the ceiling whilst riding these, the disks make for great figure stands too. Plus, since they are perfectly located, you can set your disks on a tilt that will hold even with a figure in tow, so if you have to leave the disks firmly planted on the shelf, you can still get some great dynamic posing.

I really cannot recommend these Hover Disks enough. Joe has expertly crafted them and they are really as good as anything you are going to find from any toy company right now, if not better. Like I said, it is one thing be able to create a fantastic sculpt, it is quite another the be able to reproduce it for an actual product. I bought an extra set of Palace Guards on Cyber Monday so I can paint them in all black for some Skeletor troops so they can cruise the skies around Snake Mountain. But they will have to fight my Sandtrooper for the honor.

The best part is, this is just the beginning and Joe has plans to create a second phase of the Hover Disks so that they can actually become hover bikes! Check out his blog for all the detail and keep it right here for reports on all the progress. These babies go on sale on 12/9/13 at 7 PM (that is tonight!) so DO NOT delay. You are going to love taking your toys to skies!