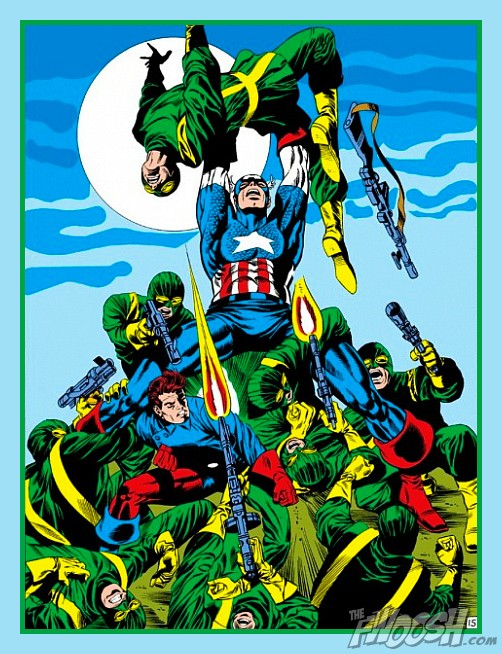 HYDRA is kind of a big deal right now, thanks to their prominent role in Captain America: The First Avenger, but these emerald-clad baddies have been making trouble in the Marvel Universe since 1965.  A worldwide criminal organization dedicated to nothing short of total world domination, HYDRA has snaked its way into dozens of comics over the years. And while they get their asses kicked as often as a serpent sheds it’s skin, one thing is certain: “If a head is cut off, two more will take its place!” 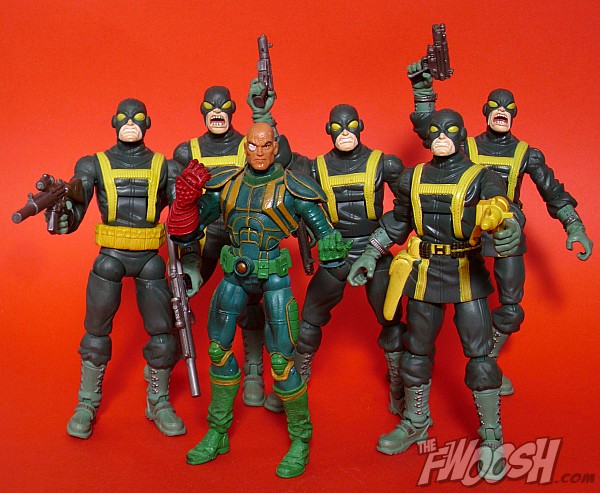 The HYDRA soldier came to us in wave 3 of Hasbro’s 2007 relaunch of Marvel Legends. The figure featured 15 points of articulation and came with two guns and a piece of the Brood Queen BAF. 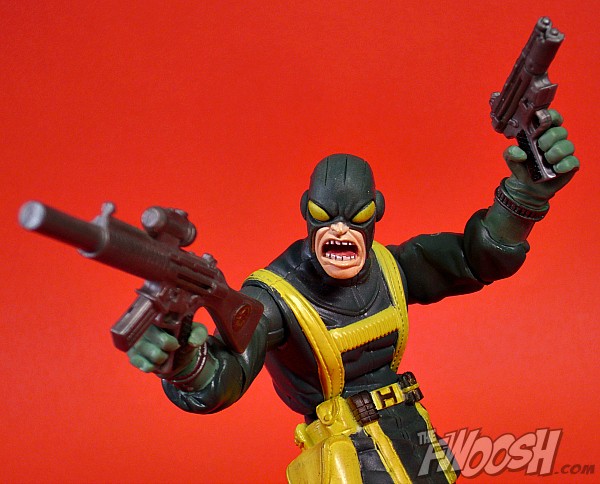 When the HYDRA Soldier came out, people were pretty shocked. While Hasbro’s first two waves were nothing to write home about, this figure represented such a drop in quality it was like stepping off a roof. The figure looked more like a Happy Meal toy than the hyper-detailed, super-articulated offerings we were used to seeing in Marvel Legends. So… what was Hasbro thinking? 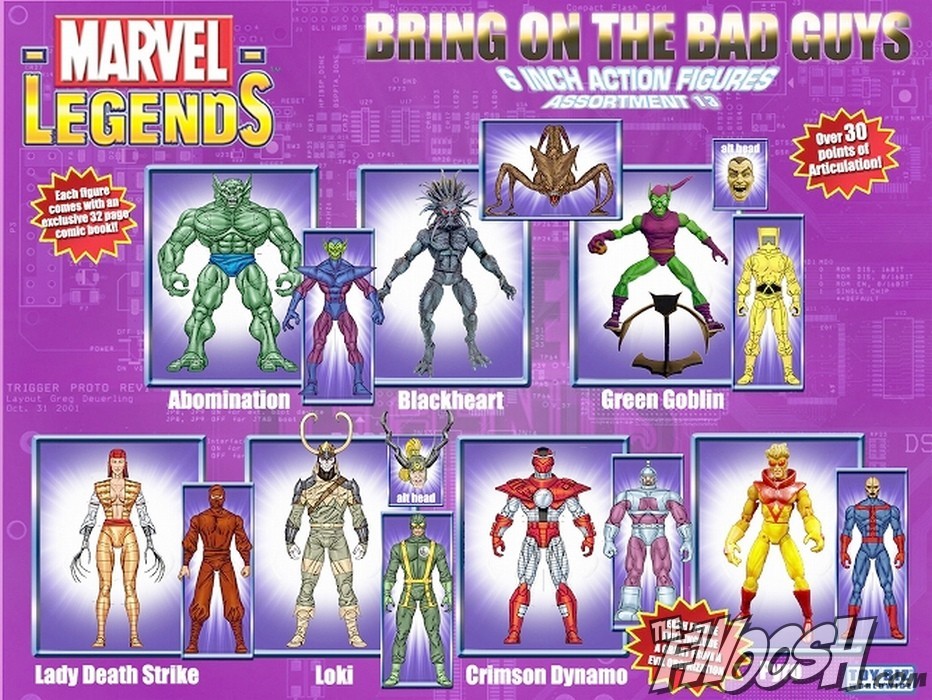 The HYDRA soldier was originally planned for inclusion in wave 13 of Toy Biz Marvel Legends. Known as the “Bring On the Bad Guys” wave, each figure in the set was to include a pack-in henchman. These henchmen had limited articulation, but offered collectors a chance to army-build characters like the AIM Soldier and the Hand Ninja. Thanks to an unexpected rise in petroleum, inclusion of the henchmen simply didn’t cost out. Eventually Hasbro, who never met a mold they didn’t like, revisited some of these pack-in figures, with the HYDRA Soldier leading the charge. 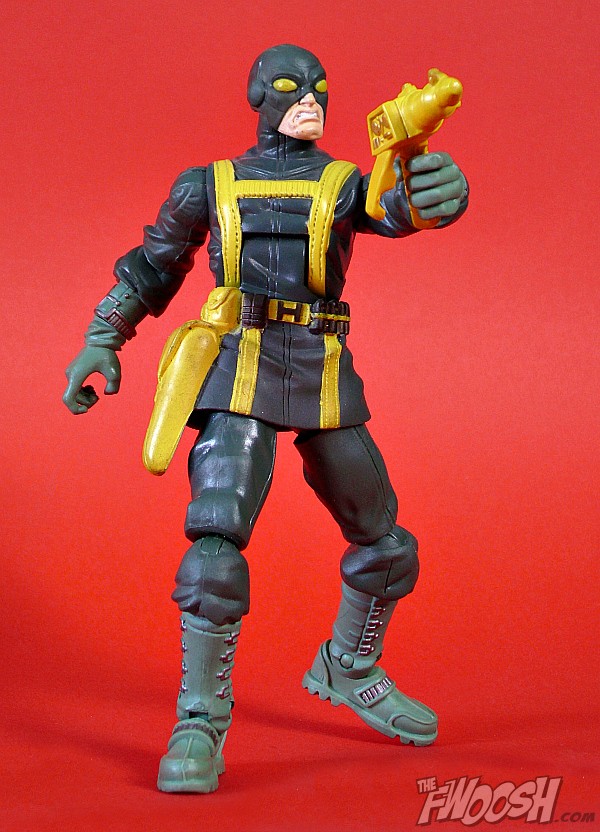 The HYDRA soldier’s origins are betrayed by it’s appearance. For a start, let’s consider the sculpt. It’s not that this guy lacks detail, but what’s there is soft. He looks like a scaled-up 3 3/4 figure, or perhaps a bootleg made with a worn-out mold. Areas like the legs are conspicuously bare, especially compared to the puffy sleeves. 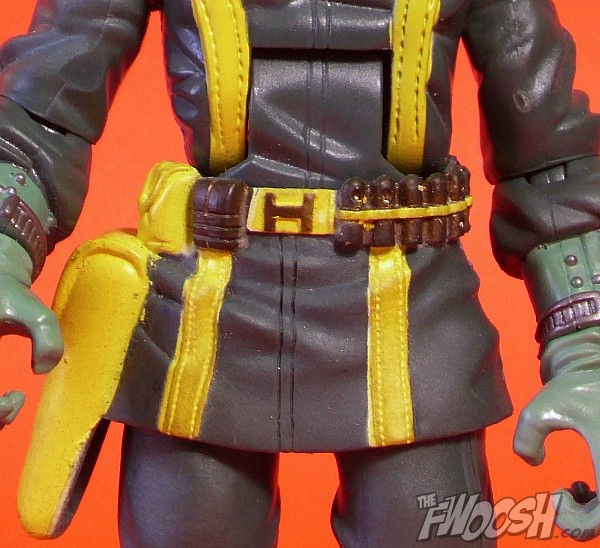 Then there’s the rubber skirt-piece. You see the problem here? It’s details are scaled to the accessories, not the actual figure. Because the handgun is big, the holster has to be bigger. It’s also hollow, which comes off as cheap on top of being ugly. Also, what am I even looking at here, Vienna sausages and an electric shaver? It’s a mess, plain and simple. Still, it hides the awful ball-joints that connect the legs to the pelvis, so it’s not all bad. Just mostly. 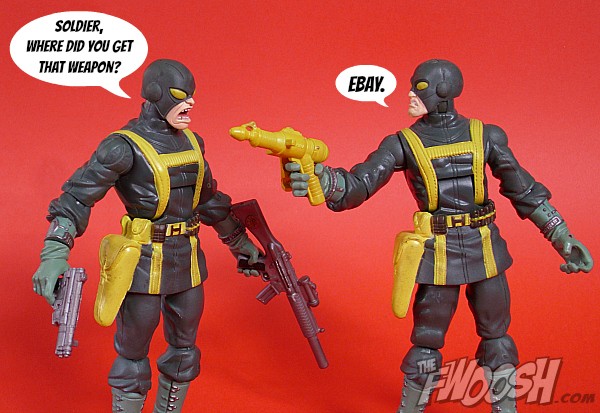 The HYDRA Soldier was issued with two separate heads: irked and really irked. While it seems strange to put any “extra” effort into this figure, having two heads does add some diversity to any HYDRA army. Personally, I would have liked to have seen a little more diversity: maybe some different weapons or perhaps a new belt. I know Hasbro was going for a certain look here, but HYDRA guys change with every appearance, so a little variety would have gone a long way. 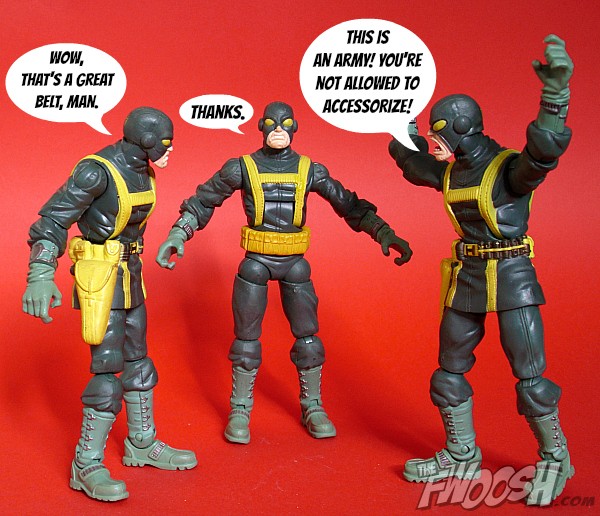 On to the articulation, or lack of it, anyway. The HYDRA Soldier is the least-articulated full-size figure to ever appear in Marvel Legends. 15 points is half of what the average figure had at the time, and what’s there… ugh. 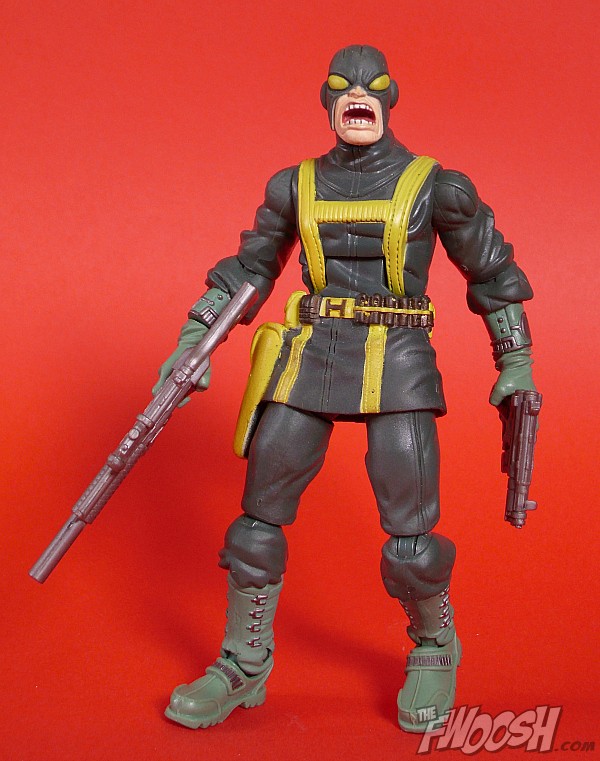 The fact that much of what’s present was cut in after the figure-sculpt was finished is painfully obvious. I mean, those knees! It’s clear there was once something there and it was just cut away to add a crappy joint. The lack of kneecaps make this guy look really strange, but if snakes don’t have ’em, I guess he doesn’t need ’em! 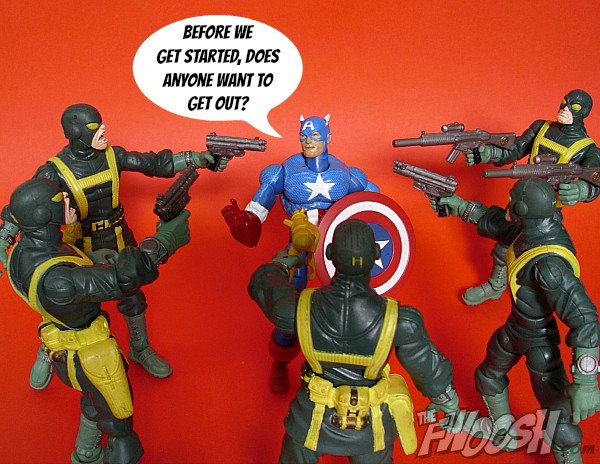 On to the paint. There’s hardly any, and what is there is awful. Hasbro cast the figure in a hideous olive-drab plastic and called it good. No wash, no over-spray, no ticky, no shirty. Compounding this disaster, a heavy coat of yellow was added to the harness in an attempt to cover the green plastic. It helps to obscure the remaining detail and adds another level of cheapness to the whole affair. 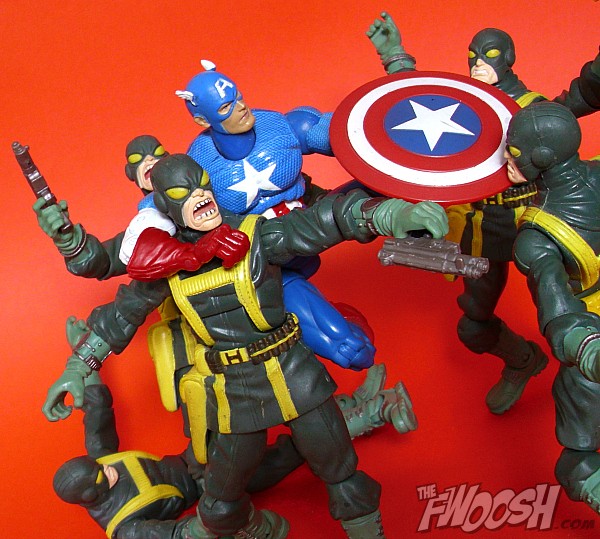 So, we have a soft sculpt, lousy articulation and a rubbish paint. But that’s not all, folks. For some reason the HYDRA Soldier is completely out of scale with the rest of the line. Not only is he almost a head taller than other figures in the line, he’s thick, as well. If you’re familiar with HYDRA from the comics, you know these soldiers are just regular guys. Sure, they keep themselves in shape, but this guy has the density of Thor, not Joe Lunchpail. It’s the fourth strike against this figure, and an unexpected one at that. From a company that soon would be giving us teen-sized Iron Man, it was a puzzling choice on Hasbro’s part. 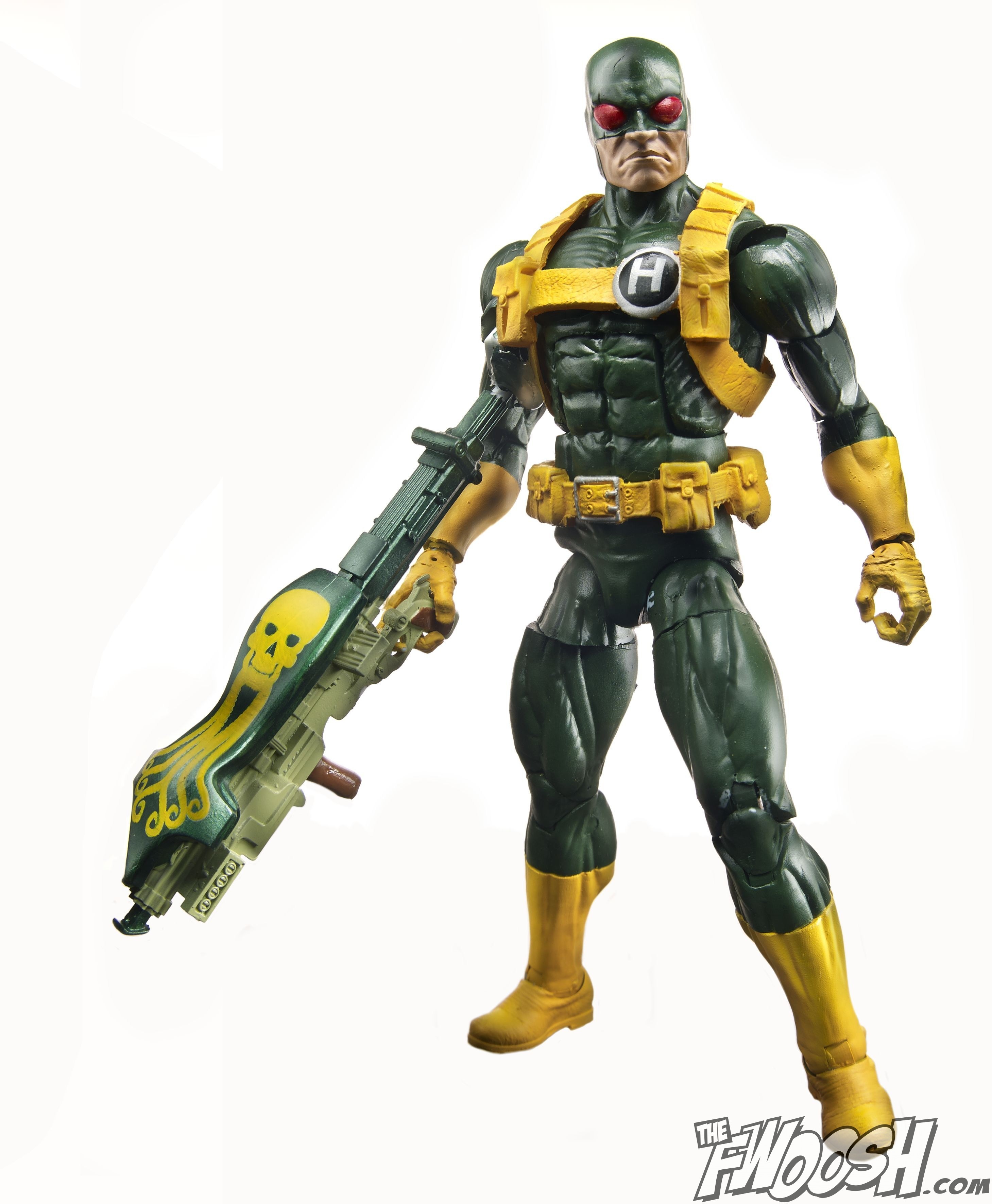 Happily, our days of under-articulated Happy Meal Hydra Soldiers are at an end. Hasbro, having gotten wind of my intention to call them out in this article, have quickly rushed a new HYDRA Soldier into production. He’ll be in the upcoming Captain America: The Winter Soldier line. Is he perfect? Well, I dunno — those feet look awfully small, and the painted glove-and-boot-lines come across as more Hasbro cost-cutting. Will I be complaining about this figure in a future article? If not me, then I’m sure someone else will. Remember, cut off one toy reviewer’s head and two more will take his place… 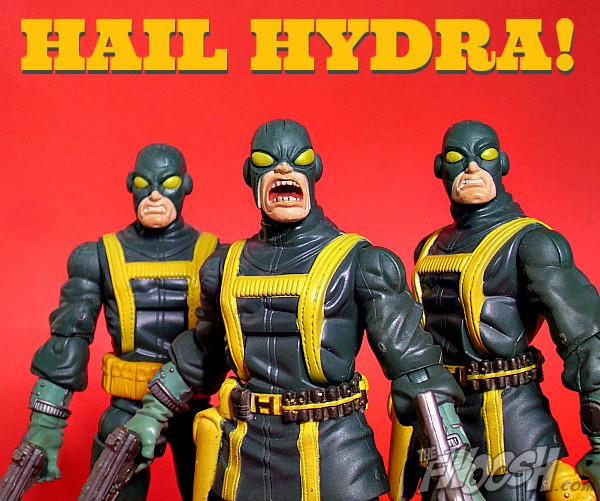