Thor isn’t the only blond-follicled Marvel hero having a big week! Longshot is getting some long-overdue attention in Marvel’s Longshot Saves the Marvel Universe, a new mini-series that hits the comic stands this week. And it’s been a long time coming.

Longshot made his debut in the wonderful Longshot, a self-titled 6-issue mini-series by Art Adams and Ann Nocenti way back in 1985, but since then he’s been shifted from one team to another in the Marvel Universe without a solid footing or purpose. He was a bit of an awkward fit in the X-Men, being that he isn’t actually a “mutant” in the strictest sense; he fared a little better in the Exiles; and as a member of X-Factor he demonstrated some real potential, but he was seldom much more than a supporting character who often provided comic relief. But now he’s front and center again, so I’m beyond excited to see what Marvel has in store for him.

ToyBiz released their Marvel Legends Longshot figure in 2006 as part of the Mojo wave, which was one of the last ToyBiz-helmed waves to make it to retail. I think I was the only person in the world excited to get him (I even bought two), judging by how long he lingered in stores like Target and Walmart. If you waited, it was possible to get him on deep clearance for just a couple bucks. This wasn’t due to his being a crappy figure, necessarily; it was because, at the time, Longshot was simply massively unpopular. The amount of groaning about his mullet when he came out was near-deafening. 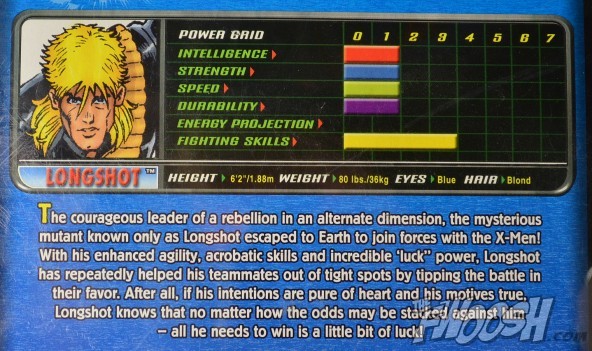 The figure was decent for its time, barring a few shortcomings. It was an all-new sculpt that was very true to the character’s design, which was so great to see, and it came packed with ToyBiz’s signature too-much-is-not-enough articulation.

The one thing that truly held the figure back was rubbery joints. His knees, elbows, and ankles are made of a very soft rubbery plastic that compromise his stability way too much — it made him a bit “floppy,” and to this day it can be challenging to keep him standing. This definitely contributed to his bargain-bin status (so it wasn’t JUST the mullet). 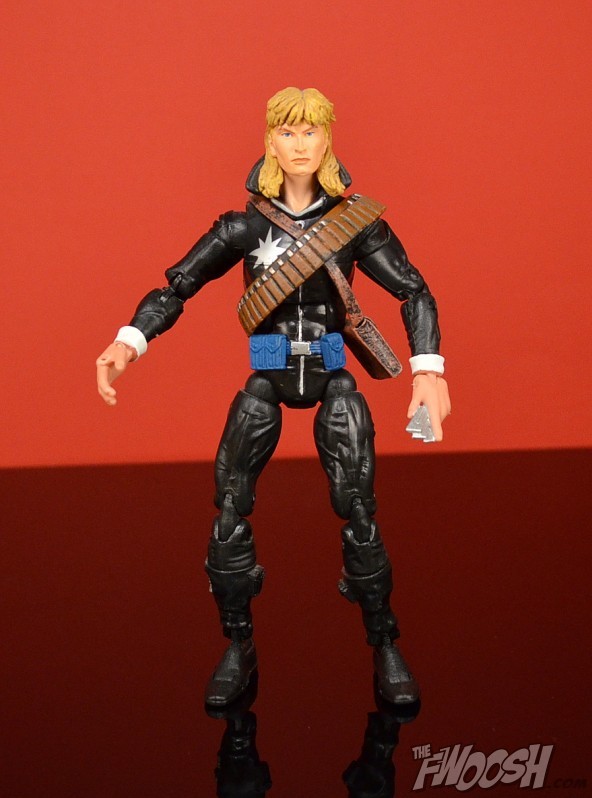 There really isn’t much to him as far as paint apps go since he’s mainly just cast in black plastic, but what paint apps are there are pretty sweet. His knife bandolier and his shoulder bag both have some great weathering effects that add some realism to the figure.

The head sculpt is … OK. It’s a nice sculpt, but I have to wonder why they made him look so angry. Longshot is not an angry character, especially in his early appearances. He was the definition of innocent and confused, but this sculpt misses those nuances by a “long shot” (sorry). His hair isn’t the most convincing in the world either. They got his haircut basically right, but the whole mop kind of looks as though it’s made out of Play-Doh. Despite all that, it’s really not a bad head sculpt; it just doesn’t scream “Longshot” to me as loudly as it should. 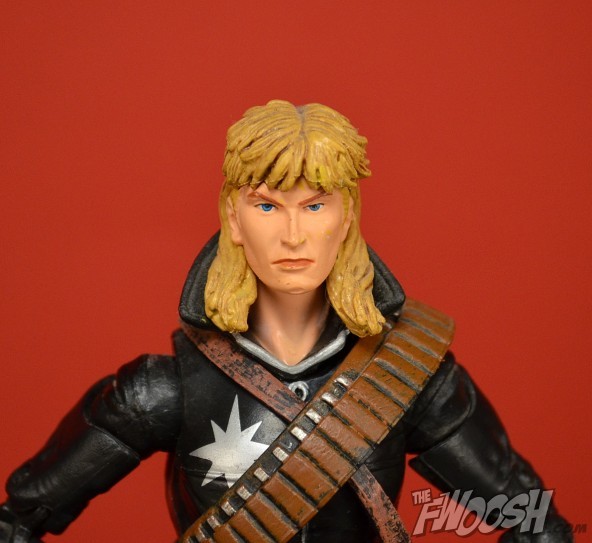 Now, one of Longshot’s key characteristics is the way his left eye glows when his “luck factor” is kicking in. It would have been great if ToyBiz had done something something to acknowledge this aspect of the character, even if all they did was paint that eye yellow. But it just wasn’t addressed at all, so all we can do is add the effect in Photoshop/Gimp/whatever.

His hands feature his signature three fingers and a thumb, and his left hand comes molded with three of his knives permanently in an “I’m about to throw these!” position. Both suit the character well, though the two hinges on his right hand are basically useless. They move, but to no real purpose. 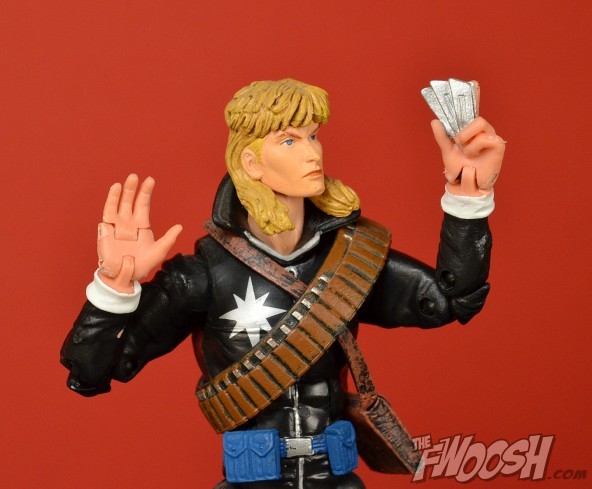 Longshot’s articulation is pretty standard for ToyBiz, meaning he’s loaded with articulation and is very easy to pose in cool action poses. He features the following:

As part of the Mojo wave, he came with a piece of the Mojo Build-A-Figure, so it was pretty awesome to get two characters from the Longshot series in one wave. Now if only Hasbro would give us Ricochet Rita and Quark! (I’m the only one clamoring for them, right?) We can at least hope for an updated Longshot figure from his X-Factor years (where he doesn’t have the mullet). 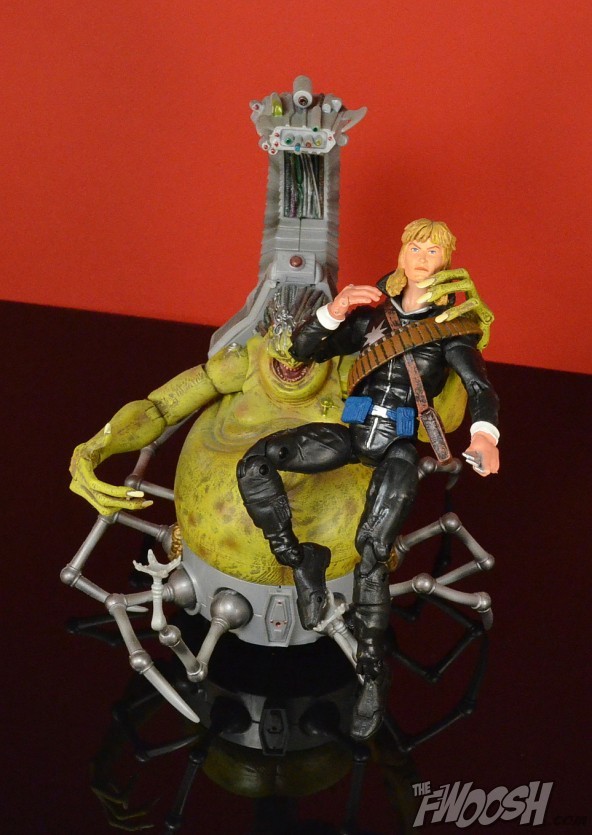 Longshot can still be had for relatively cheap, but it seems he’s not clogging up retailer racks like he once did. If you’re interested, you may want to grab one soon.