Being the Norse God of Thunder, the Son of Odin is certainly no stranger to merchandising. Representations of Thor date back to the 8th century, but it wasn’t until the 1960s that he finally got some decent toys. 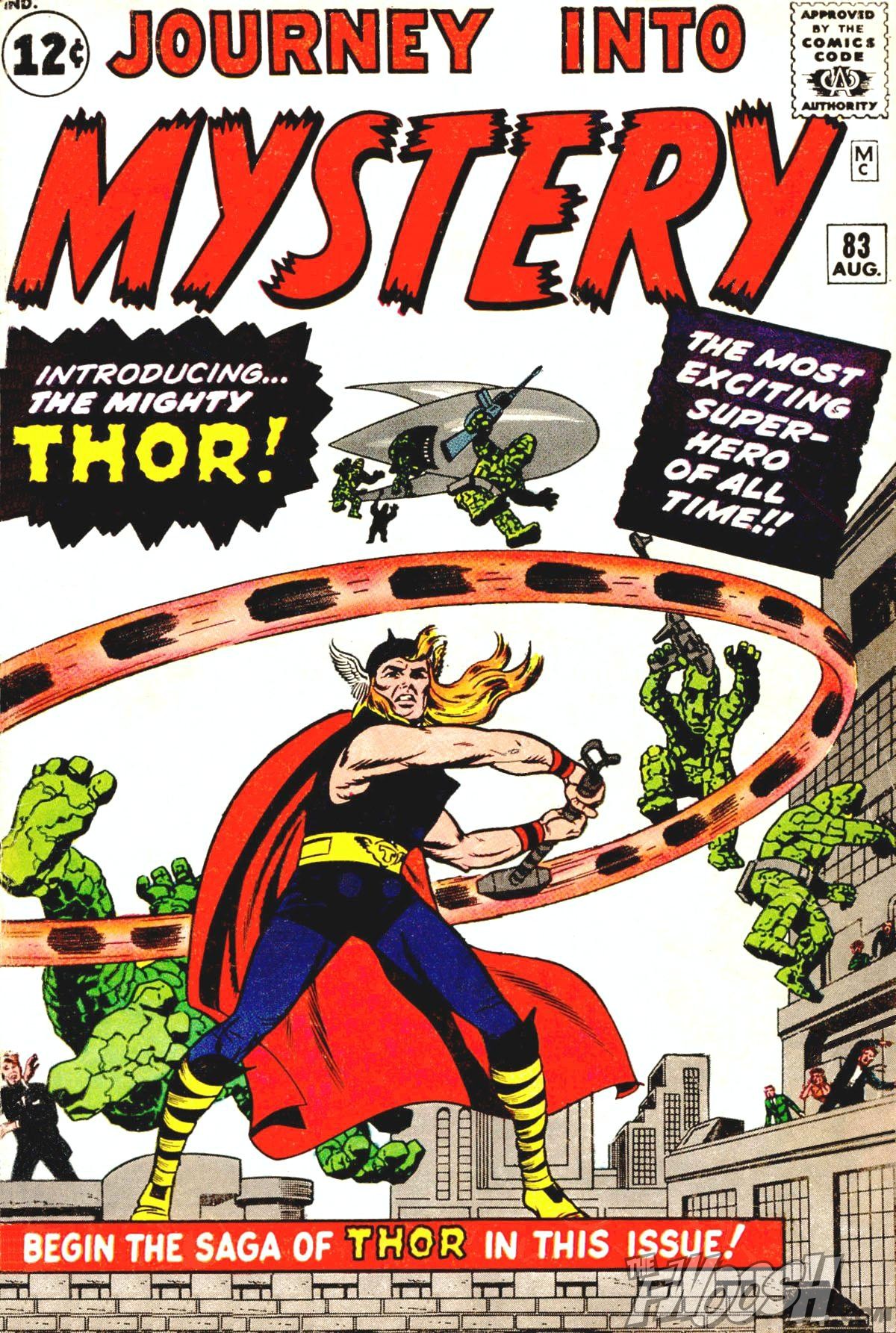 Despite being declared “the most exciting superhero of all time” on the cover of Journey Into Mystery #83, Thor was never quite the phenomena his creators had hoped for. While his title sold well enough, Thor never surpassed breakthrough hits Fantastic Four  and The Amazing Spider-Man, languishing in the ghetto of leftover sci-fi anthology books that had been Marvel’s bread and butter through the the lean years of 1957 to 1962. That didn’t stop Marvel from licensing the character, though. 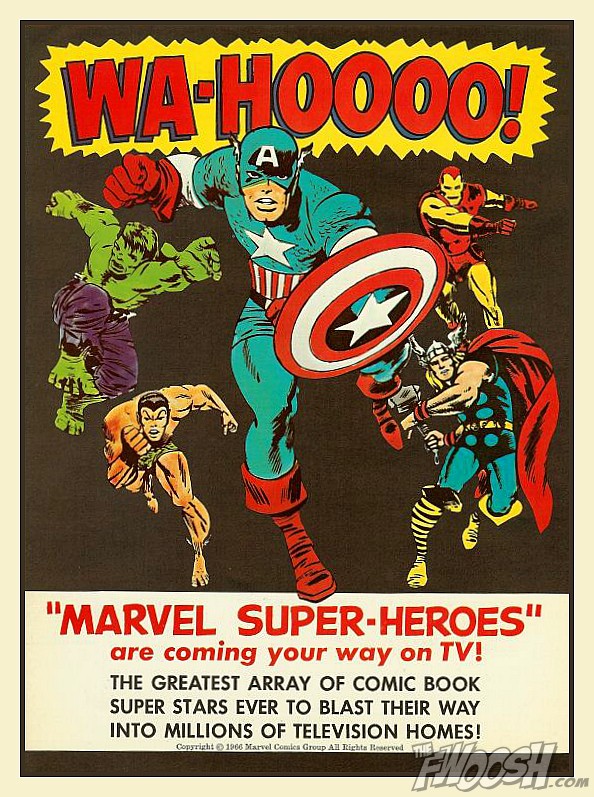 In September of 1966, The Marvel Super-Heroes debuted. This half-hour cartoon aired weekday afternoons, and featured a rotating cast of Marvel characters. Alongside Captain America, Iron Man, The Hulk, and the Sub-Mariner, Thor embarked on a series of crudely animated, yet strangely-familiar adventures. 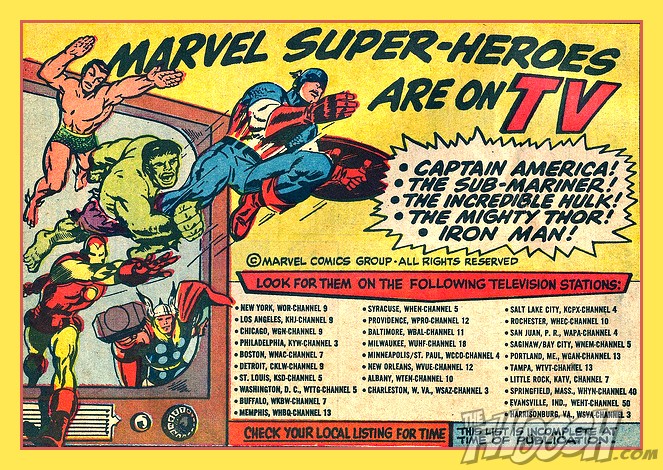 The inexpensively produced Marvel cartoons were created using a process known as xerography, which consists of taking photocopied images directly from the original comics art and manipulating them to simulate movement. It was a less than glamorous start, but it got the Marvel characters on television and lead to some interesting merchandising opportunities. 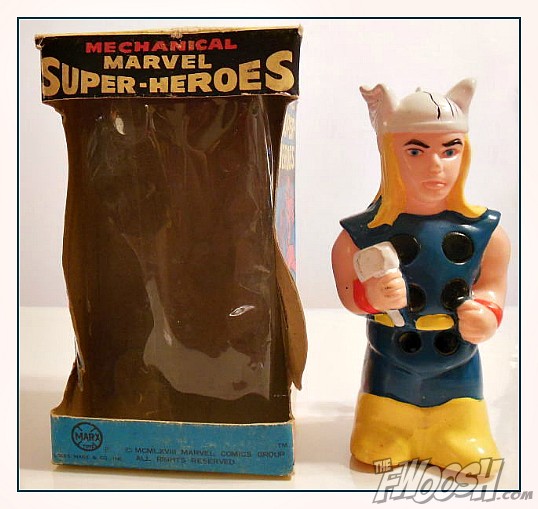 Looking more like a chew-toy for dogs than the mechanical Marvel it was purported to be, this Marx wind-up Thor could “Face Front” — and that’s about it. Powered by a metal turnkey, this low-tech toy marched onto true believer’s shelves in the summer of 1966, then into obscurity in the decades to come. Tin-toy enthusiasts have preserved this curiosity, but there are certainly better toys to bang your hammer over. 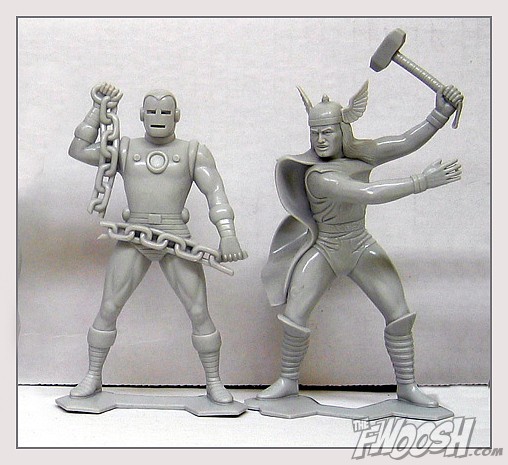 Yikes! It appears Thor’s about to take his old buddy Shellhead out, Tonya Harding-style. All kidding aside, these are some pretty choice sculpts. Little details like the wings on Thor’s helmet are sharp and cleaner than many of the mass-market plastic toys of today. Shame about the lack of articulation, though. This was the closest fans would come to having an action figure of Thor until 1975. But more on that in a bit. 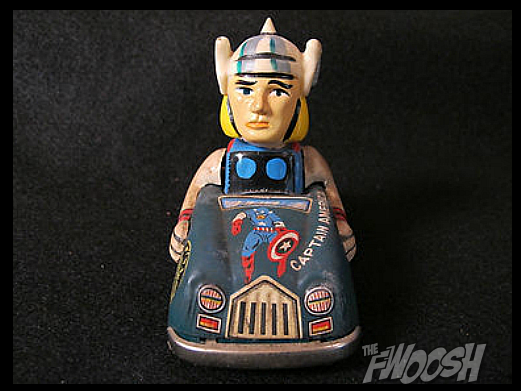 Here’s an unusually pensive Thunder God. Whatsamatta, darlin’, you lose your hairbrush? Marx manufactured these tin cars using a stock body and then adding unique heads — reuse has been with us forever, it seems. The Marvel paint decos are nifty, if a little crude; I’m thinking of doing this to the Ant-Mobile. 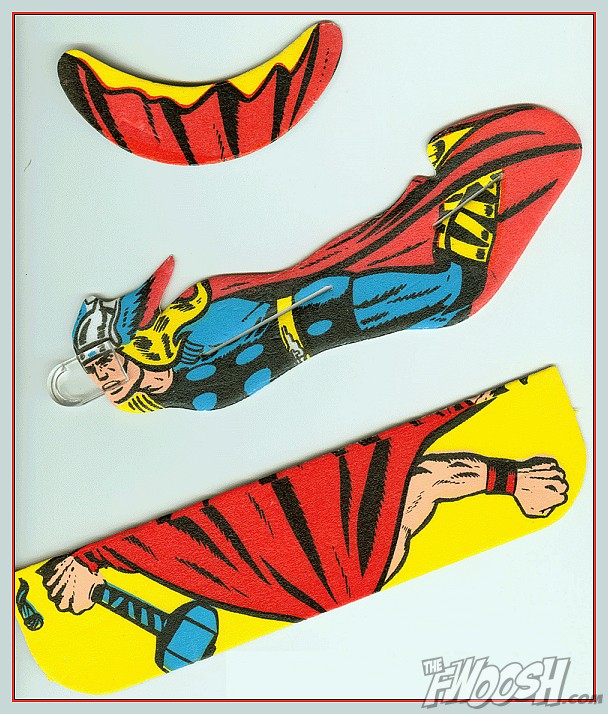 At just a dime, this Thor glider was even cheaper than a comic book. That said, a comic book probably wouldn’t end up on the garage roof five minutes after you brought it home — value is subjective, kids! The glider art looks like it was done by “Dashing” Don Heck. Heck is the Rodney Dangerfield of Silver-Age artists; despite drawing nearly every Marvel character during the 1960s, the poor guy still gets no respect. Still, it could have been worse — he could have been Kirby. Produced by Massachusetts Art, the Thor inflatable pillow is a curious little item. This is one of the first examples of Jack Kirby’s comic artwork being repurposed for commercial use. In 1969, a company called Marvelmania acquired the rights to manufacture Marvel merchandise and sold thousands of t-shirts, pins, and posters using Kirby art. Jack never saw a dime. 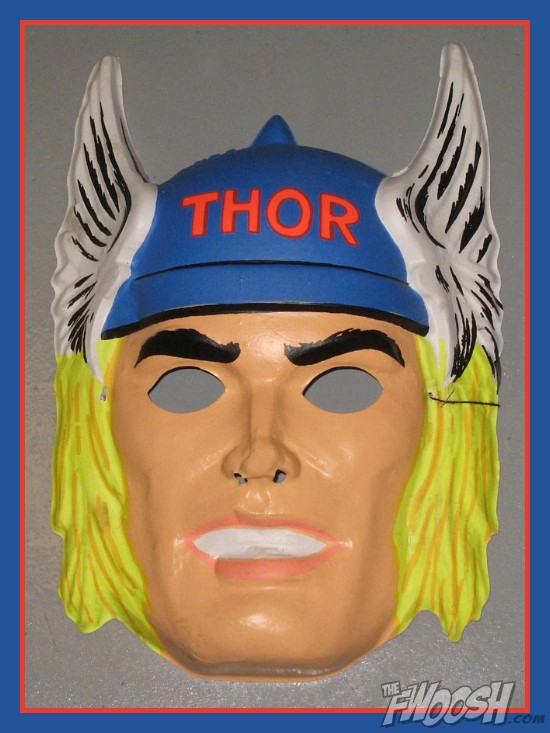 If you’ve ever followed me into the toy aisle, you’ve heard my oft-muttered mantra: “Masks and costumes are NOT toys!” I hate the fact that role-play crap is taking up valuable action figure real estate. So why would I show you a Thor costume? Well, to illustrate just how motivated Marvel was to popularize the Thunder God. They went all-in with Thor, determined to push him alongside their better-known characters. The rule was, if it was good enough for Spider-Man, it was good enough for everybody! 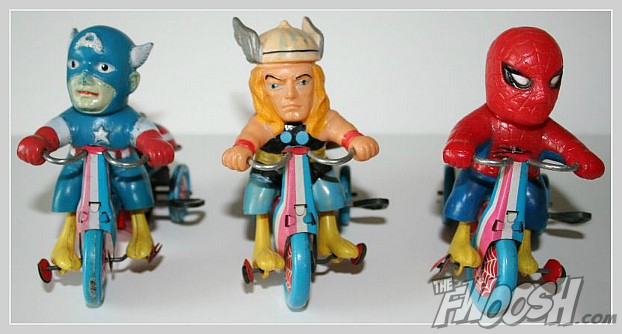 …unfortunately, Marvel was willing to play Spidey for the fool, and the other heroes were forced to go along for the ride. Thor does not look pleased at his new method of conveyance. Fortunately, he cheered up in time to draw the box art. Look at that box. It seems like something out of a dream — hard to believe this thing was actually sold in stores. And on that note: 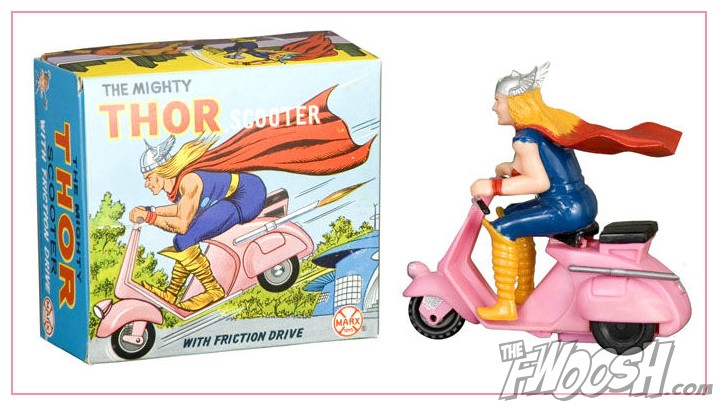 Hey, I’m not gonna be the one to tell him. Let’s just move on — nothing more to see here. 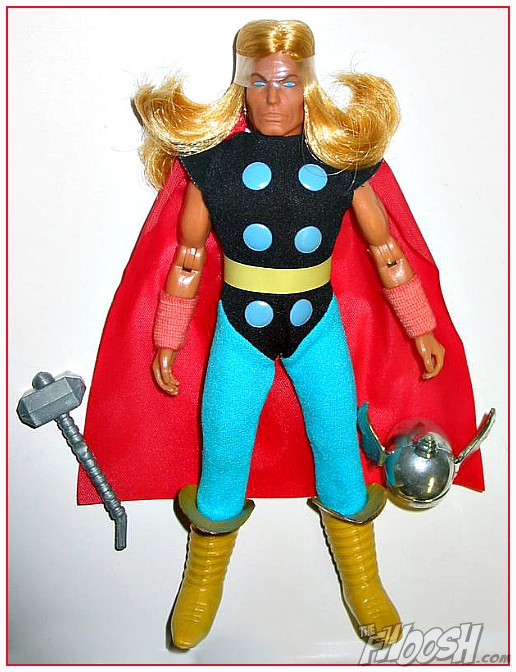 After the push of ’66, Thor didn’t see a lot of merchandising. Then, in 1975 Mego included the Thunderer in their World’s Greatest Super-Heroes line. The fully articulated 8-inch figure featured rooted hair, removable rubber boots, and character-specific accessories. Thor’s vac-metal helmet was impressive, but it was his iconic weapon that made the figure into playground gold. Mego wasn’t know for it’s accessories, so Thor’s hammer was pretty groundbreaking at the time. It may appear a little small by today’s standards, but it’s a nice, solid piece with good detail. Good luck finding one loose, though — pieces like this inevitably slipped from the figure’s hands and into the cracks of time, never to be seen again. By the mid-1970s, Thor was headlining his own comic, but the opportunity to exploit that fact had all but dried up. Thanks to his weekly television show, the Hulk had surpassed the Thunder God’s popularity and joined Captain America and Spider-Man as the three faces of Marvel. With no media tie-ins to speak of, Thor quietly faded into the background of the Marvel Universe. But his time would come. Today you can’t walk into a toy store without tripping over excess Thor product. The success of the Thunder God’s first movie led to an avalanche of Asgardian product, and with his consistent presence at the box office, you can expect to see much more. Once considered too niche for inclusion in Mattel’s Secret Wars collection, Thor now has an entire toy line bearing his name. Not bad for a god people had written off by the 12th century. Jason R. Mink is the Man in the Anthill!