Hey everyone, Push You Down has taken the time to piece together a mishmash of toys based on cast members of Boogie Nights for us. They have an action figure? Yes … yes they do. This is Part 1; Part 2 will be published next week, so stay tuned. Take it away, Push!

The true measure of stardom isn’t major awards or box office grosses. It is in a much more relatable form: action figures. Specifically, action figures bearing the actor’s likeness.  What could be a more tangible measure of celebrity worth than that?

It’s no surprise that some actors have toys based on their likeness. Even discounting the celebrity action figure market — which sounds like an odd idea, but does, in fact, exist — some actors have multiple representations of themselves in plastic. Even predating Star Wars and the birth of modern merchandising, companies like Mego were putting out toys and dolls bearing the likenesses of adventure heroes like Lee Majors and Sonny Bono.

There are actors, well respected and highly regarded, who are usually seen in highbrow, or at least certainly noncommercial, films. These actors may seem somehow above this crass sort of celebrity, but a surprising number have dipped their toes in the mainstream market and have been immortalized in plastic. This series will take a look at surprising actors and celebrities that have had toys made in their likeness.

(For the purpose of this series, there will be some criteria as to what counts as a “toy.” The basic rule will be if it’s a figure you could buy at a store in the mall or at another mass retailer, it will count as a “toy.” If it costs $200 and had to be mail-ordered, it does not count.)
Plastic Nights
In 1997, Paul Thomas Anderson took his first step into the wider world with his sophomore directing effort Boogie Nights. The movie can be seen as either a dark comedy or a surprisingly funny drama. Not only did it put Anderson on the road to being seen as one of the great contemporary American directors, it also launched a great number of its ensemble cast onto their own road to stardom — true stardom. Plastic stardom.

Now, let me clarify, there are no Boogie Nights action figures, and that is disappointing, believe me. However, the majority of the cast of Boogie Nights does, indeed, have action figures made in their likeness. They just happen to come from a myriad of different movie franchises that they starred in later (or in two cases, earlier). Sadly, they are not uniformly in scale, so any fantasy of reenacting scenes in a “porn-shoot diorama” will have to remain unfulfilled, although you could probably repurpose a Mego 6 Million Dollar Man OSI headquarters playset if you were so inclined. 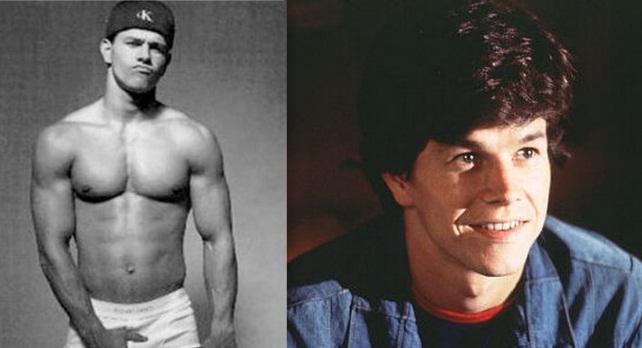 Boogie Nights moved Marky Mark from the “underwear rapper” and “Witherspoon diddler” (seriously, go find a copy of Fear in the VHS section of your local Goodwill) to a serious actor. He plays a well-meaning idiot who, due to his “physical gift,” takes the name “Dirk Diggler” and becomes a successful idiot and then a drug-addled idiot. It was this role and deftness of his portrayal that assuredly led him to the attention of other auteur directors like David O. Russell, Martin Scorsese, and Tim Burton.

Speaking of Burton, this brings us to Mr. Wahlberg’s debut in plastic form. After several aborted attempts (one involving Schwarzenegger) to remake the classic sci-fi franchise, Tim Burton came aboard for the new version of The Planet of the Apes. The Chuck Heston role — meaning the smart human who has to deal with this nightmarish version of the world, not the actual role played by Chuck Heston in the remake — would be taken on by Mark Wahlberg.

This was a big-budget, sci-fi action franchise reboot — before rebooting franchises was the industry standard. Of course there would be toys. Marky Mark would have his likeness put on an action figure in two different scales and become unquestionably a star.

Hasbro released a 12-inch doll and a 6-inch action figure. The 6-inch figure, oddly, has a much better likeness than the doll. The doll’s eyebrows make him look very, very concerned … about the poop he clearly needs to take.  The 6-inch figure does suffer from an “action-attack” arm that basically makes him look good in only one pose. While the smaller figure is wearing an outfit that disappears after the first 30 minutes of the movie, the doll wears his grubbier action scenes outfit. Since it is a doll, though, you’d think they would have Malibu Stacy-ed him and released a version that had the space suit. Instead, we get a doll with nothing else to wear and a “gotta poop” face.

It does seem that Wahlberg would be the “one most likely to be a multiple franchiser” out of all the stars in Boogie Nights, but, oddly, he is not. To date, this is his only movie with a toyline.

Heather Graham-
Before Boogie Nights, you might have remembered her as Mercedes, the love interest in the Feldman/Haim ’80s romper License to Drive, or possibly as the girl in Swingers. Her role in 1989’s Drugstore Cowboy even earned her an Independent Spirit Award nomination, but didn’t take her much farther.She had a lot of small parts in a lot of small movies — a perfectly respectable career for a very beautiful woman.Then she strapped on some roller skates, tore off her dress, and gave a million moviegoers a new appreciation for the song “Brand New Key.”

Shortly after Boogie Nights, the talented Ms. Graham would appear in the first movie in an early attempted franchise reboot of Lost in Space. Graham plays DOCTOR Judy Robinson. In the original series, Judy is just an average space-age teen girl, but for the movie she gets a promotion to Doctor — and not even a medical doctor, but a science doctor … a physicist? I’m not going to watch the movie again to find out. It’s not good. Neither is her action figure. It’s a very soft likeness, but it is a blonde with expressive eyes, so there’s little doubt that they were going for her look. 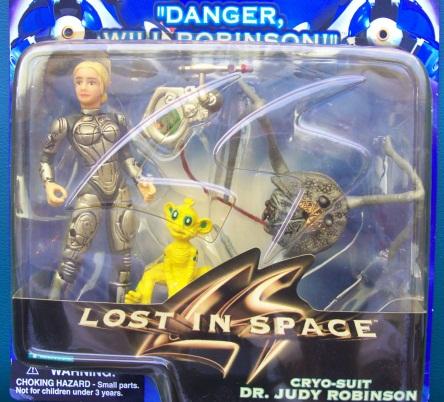 The fact she got a figure in the movie line (manufactured by the now-defunct Trendmasters) was impressive. A movie with only seven primary human characters had only six human figures released in the line, and two of them were of Dr. Smith. The “Space Family Robinson”was missing two of its other female members in plastic form, one of which was the mom. It looks like Trendmasters decided kids would be more into the “romance angle” than the family dynamic for their play scenarios. Dr. Judy Robinson could get rescued by the dashing Major Don West — OR, HEY — it is the future, so maybe she could rescue him. Maybe by throwing that Muppet that she comes with at evil Future Smith and his spider minion.

A year later, Heather Graham would get her highest-profile role. She would be cast in the sequel to the surprise hit and catch-phrase factory Austin Powers. She played Felicity Shagwell, a fellow super spy and new love interest to replace the character-advancing, but sadly innuendoless-named Vanessa Kensington. 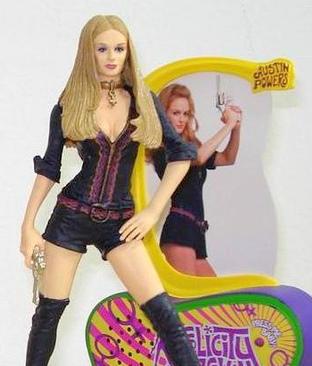 McFarlane Toys had the license for the Austin Powers movies, so that means her figure is pretty much a glorified statue. The one thing that McFarlane Toys does well is sculpting, so that means the likeness is quite good. At the risk of sounding like a creeper, the figure is kind of sexy. Man, there really is no way to not sound like a creeper when describing a toy as “sexy.”
“Sexy” basically became the defining characteristic for the majority of Graham’s roles. The hiccup of the space adventuring doctor aside, her follow-up roles after Boogie Nights and Austin Powers were all about her being the “sexy”starlet, the “sexy” doctor, and the “sexy” disease-ridden prostitute in From Hell. Her very funny role on IFC’s Portlandia was basically built around the premise of “what if a sexy girl came to that poetry group?”
Short of her role in the Hangover movies, and probably due to her age (she’s in her 40s, and in Hollywood that is far too hold to be anything more than comically sexy), she’s largely retreated back to the kind of films she had built her early career on. She also has the ignoble status of being the star of one of the fastest cancelled shows in the modern era of television. One thing that can never be taken away from her is that fans can actually hold her in their hands — two versions of her, actually, and one of them is kind of sexy. Really sexy.

That plastic stardom would happen in 2010 when he’d take over the role of James “Rhodey” Rhodes in Iron Man 2. Originally, the role was played by Terrence Howard in the first Iron Man, but either he was cut over a salary dispute or they decided that buttery smooth voice of Howard’s lacked the mother-hen gravitas needed for the role. Rhodes does spend an awful lot of the movie chastising Tony.

Cheadle’s plastic immortalization is somewhat bittersweet — he was supposed to have two figures from the movie made bearing his likeness, but one was cancelled.

Hasbro originally intended to make an “unmasked” set featuring heads with the likenesses of Robert Downey Jr. and Cheadle on their 3 ¾-inch armored-body counterparts. It would have also included a Scarlet Johannsen Black Widow figure that looked kind of like a sex doll. The set was even featured in a USA Today article, but, unfortunately, it was never released. If curious, you can very easily find the Cheadle-head War Machine figure for sale from Chinese eBay sellers. 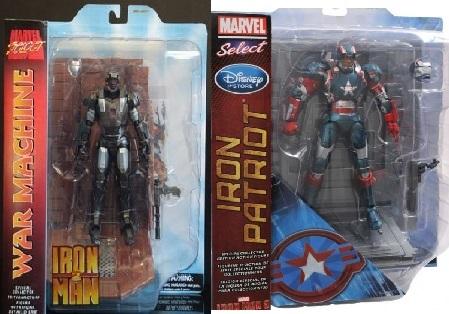 The figure that would be released would come from Marvel Select, the specialty collector toyline. The Marvel Select War Machine figure represents Rhodes wearing his government-issued version of the Iron Man armor. It features a raised faceplate showing a great likeness of the actor. The Marvel Select figure comes with a high-tech backdrop for displaying the figure and excellent articulation. For the release of Iron Man 3, Marvel Select would do another figure with Cheadle’s face, this time in the Iron Patriot armor.
Since his roles in the Iron Man franchise, he’s starred as the lead in the Showtime series House of Lies, had more supporting roles in movies, and played Captain Planet in a series of web shorts. Yes, you read that right.

Come back next week for the second, and final, installment!