Bluestreak is one of those characters who was never really featured prominently in anything in the G1 days. He was no Bumblebee, Jazz, or Ironhide, all of whom would go on to be iconic characters. Bluestreak was just sorta … there. His toy existed, so he was worked into the cartoon and the comic because, hey, Hasbro needed to sell him. He was the definition of a supporting, “background” character, so he probably wasn’t high on anyone’s list of desired characters to receive the Takara Masterpiece treatment. Prowl most certainly was, however, and since the two characters shared a mold in the original G1 days, it made sense for Takara to make the most of the opportunity and the mold by releasing Bluestreak within the same time frame as Prowl. Bluestreak may have never been as major a character as Prowl, but any Autobot car is a most welcome addition to the Masterpiece collection at this point, and Bluestreak actually turned out to be a better figure than I could have even hoped to expect.

The Masterpiece line strives to produce figures that very closely resemble the character models that were used in the original Marvel comic and in the G1 cartoon. There have been some hits (Grimlock), there have been some misses (the first release of Starscream), but they largely come darn close to being the figures we wished we had in 1984. Bluestreak here is no exception since he comes so close to being perfectly on-model. Takara nailed everything as closely as physics will allow, and, once again, the result is a figure that is an absolute joy to add to the collection.

The packaging is stylistically consistent with every other release in the Masterpiece line, so there are no real surprises here. Takara seems to have sidestepped the name debate (note: there is no name debate) by simply naming the character “Streak” rather than going with “Bluestreak” or “Silverstreak.” Evidently the rights to the name “Bluestreak” could not be secured, so various releases over the years have been named a variation of “Streak” or “Silverstreak.”

I’ve known him as “Bluestreak” ever since I was first introduced to him in the G1 days, so that’s the name I choose to use, and, just to be clear, I feel I need to point out that his name has nothing to do with his appearance; it’s in reference to an aspect of his personality — basically he’s fast and he talks a lot, personality traits that were later transferred to Blurr, more or less. This excerpt from the Marvel comic may shed some light:

Fans have often expressed a desire for a blue Bluestreak, and images of a blue G1 figure have popped up here and there for years, which has done nothing but fuel this desire. A blue figure would seem to logically connect the figure to his name in a very overt way, especially since the term “blue streak” seems to have fallen out of popular usage. We’ll see if Takara gives us a blue repaint in the future, but for now, we get to enjoy this updated version of the figure in his intended color scheme.

Early pictures of Bluestreak depicted a figure that looked rather boring. The combination of black, gray, and red really wasn’t doing anything for anyone, and he looked especially dull in comparison to the highly anticipated Prowl. And if you already have Prowl, then you know exactly what to expect from this figure in terms of transformation and articulation. Though Prowl may have looked like the more visually striking figure in early photos, ironically the opposite turned out to be true. Bluestreak is the much more visually interesting of the two, and he’s one of the more visually appealing figures in the Masterpiece line so far.

It’s the paint. The black is such a high-gloss paint that it practically serves as a mirror. It’s gorgeous. I had originally intended to use a blue background for this shoot, but the black reflected the blue to such a degree that he looked blue in the pics. I tried every lighting scheme I could, but nothing served to depict the figure in colors that were true to his actual appearance, so I had no choice but to go with black. This may sound like a complaint, but it’s not. His glossy black is beautiful in person. Even his gray/silver has a metallic glisten to it that really makes the figure pop. 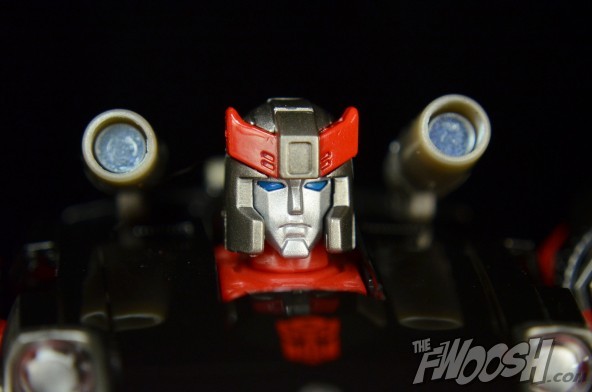 His head sculpt is brand new and does a lot in differentiating him from his mold-mate. And I have to say, in the ocean of black, gray, and red that make up this figure’s color scheme, his blue eyes really stand out and add a beautiful splash of color to the figure. I love this head sculpt, and I didn’t even notice that little bit of red paint slop on the right “wing” on his helmet until I took this close-up. Thankfully it’s not noticeable at all when viewed under normal circumstances (or else I would go crazy). 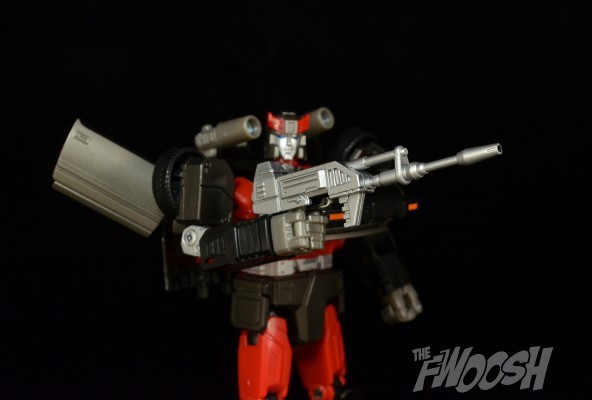 His weapon is the same as Prowl’s, and he can hold it in his hand or it can be attached to the roof of his car mode, which looks totally goofy but totally awesome at the same time. 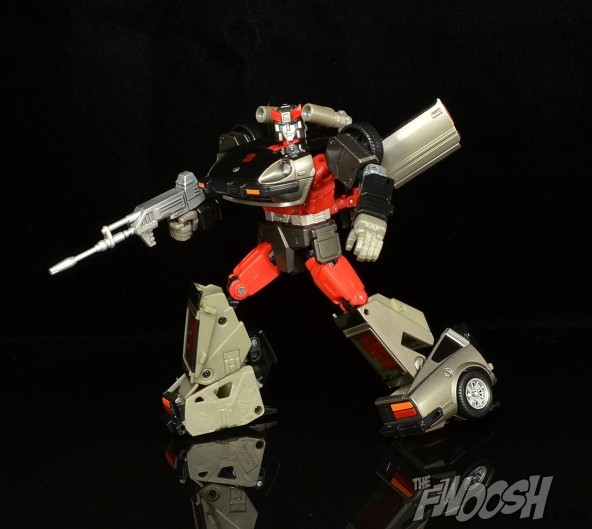 His articulation is pretty standard for a high-end Transformer toy, and he can pull off any number of dramatic poses with ease. He’s got good ankle articulation, and the surface area of his feet provide a stability that makes cool poses possible. 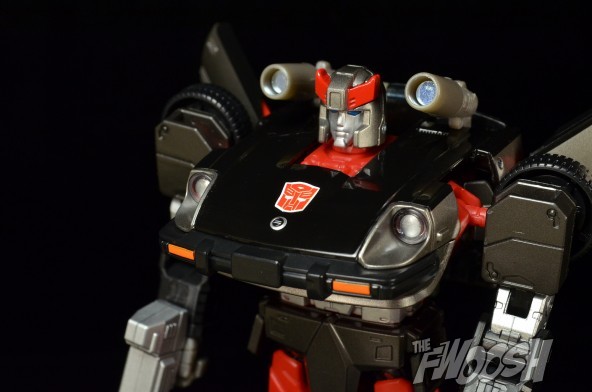 One criticism I have is the design of the Autobot sigil on his chest. It’s a darkish red set against a black background, so it gets kinda lost. I prefer my ‘bots to have an Autobot sigil with a white outline, so I slapped on a Reprolabels Autobot sigil over it with the quickness. It stands out much more and looks way better in my opinion.

His “rocket launchers” on either side of his head don’t really look like rocket launchers either. They look more like small searchlights due to the reflective material that can be seen deep inside them. I’m not sure if that’s what they’re supposed to be, but I’m just going to go with it. 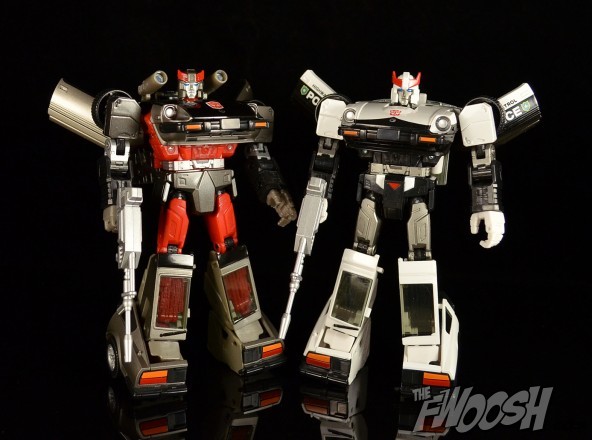 Both figures are so darn pretty. I can’t wait to add Smokescreen to the crew because I’ve decided that I love this mold after playing with these two for a while now. I think I officially prefer it to the Sideswipe mold.

Bluestreak’s alt mode is where the stellar paint job is really showcased. He’s a Fairlady-Z, just like Prowl, and everything pegs together and fits in place perfectly. I still wish this mold had an actual car interior, but since he’ll be staying in ‘bot mode most of the time, It’s not something that is going to bug me in the long term.

Like Prowl and Sideswipe, his tires are a hard plastic rather than rubber. That does compromise the realism of the car a bit, but since “realism” was already shot to heck by the lack of a car interior, I’ll learn to live with it.

It’s exciting to see the Masterpiece Autobot troops expanding with each figure, and I can’t wait to add more to the set (Tigertrack isn’t pictured because I couldn’t fit him in the shot, so I’m going to have to figure out something by the time Smokescreen gets here). While many may not be very familiar with Bluestreak as a character, this figure is as worthy of a spot in a Masterpiece collection as any of them. I’m very excited to have him.