Sometimes that old saying really is true: you don’t know what you want until you get it. When Masters of the Universe Classics first started, if you had asked me if I wanted any of the New Adventures characters in the line, I probably would have said I wasn’t really eager for them. I didn’t have anything against them, but I didn’t really “need” them when there were so many other more important characters to get to.

New Adventures has perhaps the smallest voice among these contingents. Sure, there are strident supporters of getting more New Adventures figures into the line, but they’re often drowned out by the massive, unrelenting number of people who want all the toys that they had as a kid, and that’s all they want, and they want it now now now. A lot of times there’s an unwillingness to embrace the vast Universe included in the term “Masters of the Universe,” and that’s a shame because the NA figures have ended up being some of the most colorful, unique, and well-done figures of the entire line.

Maybe it’s the underdog factor that’s made the Powers-that-be spend a little more time making sure each New Adventure figure is extra special. Or maybe there was something inherent in the property that only need a little love — just like Charlie Brown’s Christmas tree — to be brought out.

The term “doesn’t fit in” has been bandied about with an apocalyptic, righteous fervor ever since the line debuted back in 2008. It seems like there’s a way to apply that to every figure, from Evil-Lyn’s yellow skin to Clawful’s eyes to Orko to the more realistic Fisto’s head. Vikor, Vykron, and most of the 30th anniversary figures have all been his by this verbal bullet. But New Adventures takes a lot of hits in this particular battle, mainly because it upsets people’s basic concept of He-Man as sword and sorcery. I hate to be the bearer of bad news, but this line hasn’t been strictly sword and sorcery since the debut. Elements of science fiction have been involved since the beginning, and what New Adventures does that’s especially cool is it rewrites the core concepts with those Science Fiction elements at the forefront. I think that’s what makes it cool to me. Bios or source material aside, I like to think of NA He-Man and Skeletor as if it were an alternate universe where Eternia developed without magic. But it works equally well if you just keep it as one long stream of continuity also. Concepts evolve and change over time. I’m glad we’re not having to wait until the end of the vintage to get the birth of the New. 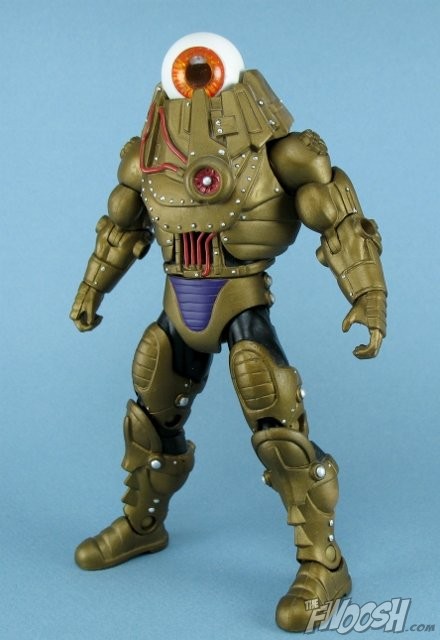 The 4 Horsemen wisely exploded out of the starting gate with the coolest possible New Adventures character. If I had my doubts as to how cool the New Adventures figures would be, Optikk dispelled them immediately. One look at that fully armored figure with the single unblinking eye for a head let me know immediately that the addition of the NA figures would be just fine with me. I had essentially no knowledge of any of the NA figures. The cartoon wasn’t on my radar, and the few times I saw the figures as a kid, I assumed it was some strange knock-off of the concept of He-Man that wasn’t connected to what I considered “my He-Man” continuity. So Optikk was this strange, brilliant, bizarre, brand-new character that instantly broadened my view of this line and this universe. Suddenly it wasn’t about just getting the guys I grew up with and those I never managed to get. The glass was broken. There was an entire universe waiting to be rediscovered as an adult, with whacked-out concepts that made guys like Trap Jaw seem almost normal in comparison.

In short, the story — that all important cog that makes this micro-world fun — expanded. 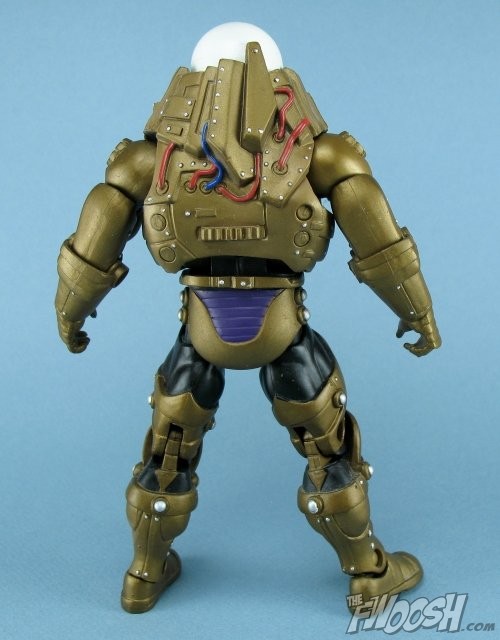 Optikk is that perfect blend of Science fiction and the bizarre that could only have come from a time period when the imagination behind toy concepts was running at an all-time high. It took modern-day skills to update what may once have been a blister-packed forgotten warrior into a bad-ass armored eyeball that kicked down the door and stole your lunch money. Flipshot, or “Icarius,” was the next NA figure, and took the entire science fictional aspect even further. This futuristic warrior went beyond the battle-worn concepts of regular MOTU and sent them into Buck Rogers/Flash Gordon-era overdrive. There was nothing quite like this in the original line. We had cowboys with guns in their body (another concept people crazily think “doesn’t fit”) and Hordes of killer robots, but we never had a jetpack-wearing futuristic warrior armed with missiles. We didn’t know we needed him until we got him, and now what would we do without him? Slush Head took the alien nature of Optikk even further, presenting a bizarre, otherwordly design that didn’t resemble anything from Skeletor’s Evil warriors of the Horde. The monsters, demons, and all-around oddities have always been the highlights of the MOTU world, and Slush Head fit right in. My only complaint about him is that his tentacle thingies aren’t bendable. Next up is probably my second favorite after Optikk: Karatti. Karatti is when I first started hearing more and more complaints about the reuse of Trap Jaw parts. And about his expanded ab section, apparently, but you know, alien physique and everything, who cares? Not I. All I care about is that Karatti will kill you while you cry for your mommy. I had the same visceral reaction to seeing him for the first time that I did with Optikk. I needed a vicious Hunter-Killer alien in the lineup, and Karatti was there ready and willing to fill that hole. Plenty of people have called him the Predator of the MOTU world, and I can’t think of a better identifier for him. He’s the one the Horde refused to accept into their ranks because he’s so unpredictable and deadly. Finally there’s the updated New Adventures-styled He-Man. He’s totally divorced from what we expect of He-Man. His sword, shield, and clothing are all teched-out and there’s none of the barbarian-styled hero we’re used to. Is this really a future version of He-Man on an alien planet, or is this what the He-Man of a tech-based Eternia would look like? That’s up to you. I dig him all dude-up and teched-out as possible, stretching the concept as far as it can go into total science fiction He-Man.

We’ve got plenty of NA figures in our future, but I’m hoping they eventually get to them all. Too often we dismiss concepts without giving them a chance based on bias, prejudice or lack of effort. New Adventures fit in and have earned a place in this line by being cool, fun, unique figures that expand the core concept of the long-lasting franchise, the same way each new wave released in the ‘80s laid more foundation on the core built by He-Man, Man-At-Arms, Skeletor, and Beast Man.