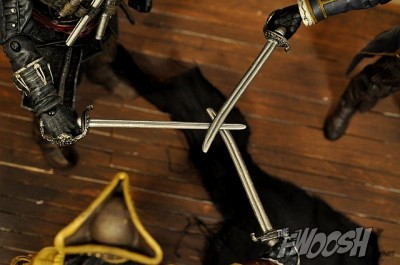 I am not a gamer. In my eyes, video game technology peaked in 1986 with Rampage. Character skins, downloadable content, Wii Fit – that’ s just all too much for my old-man brain to handle. One-player for one quarter, two-players for two quarters — those were your options in my day, and we were lucky to have them. Despite my complete and utter ignorance of gaming, I can say that on those occasions when I buy a toy just because it looks cool, there’s a very good chance that it comes from a video game. And a video game featuring actual real-life pirates? Sold!

McFarlane Toys individually released three of the pirates seen in Assassin’s Creed IV: Black Flag, but I will be checking out the box set containing all three historical figures. Do they stand up to the characters as seen in the game? I haven’t a clue. But we’ll see how they measure up in terms of really cool-looking plastic pirates. (SPOILER: Really, really well). 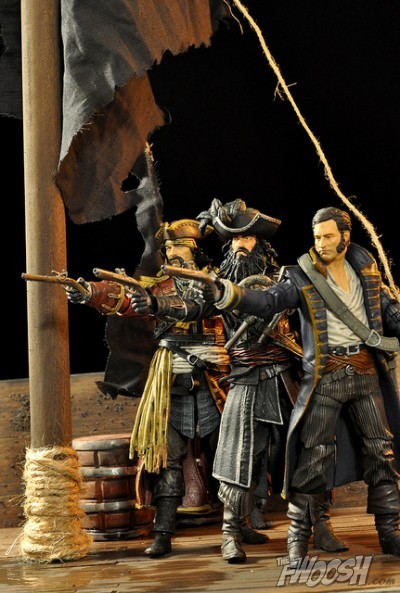 The “Golden Age of Piracy” pack comes in a large and attractive box containing Edward “Blackbeard” Teach, Bartholomew “Black Bart” Roberts, and Benjamin Hornigold. Also included are loads of accessories. You get both Blackbeard and Black Bart’s hat, three sabers, six pistols, and two bayonets. Blackbeard and Hornigold are also outfitted with a removable weapon holster. All of the weapons have sculpted details and are cast in a hard plastic, which is always a huge plus is my book. 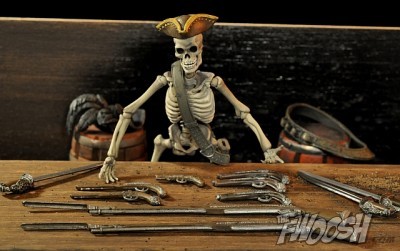 All three figures stand at just under 6 inches. They’re too small for your typical 6-inch line, but fit reasonably well with Mattel’s Movie Masters scale. The standard articulation scheme is in place for all three, but some wear it better than others. Each figure has articulation in its head (ball), shoulders, elbows, wrists, waist (cut), hips, knees, and ankles. We’ll get to the pros and cons of each figure in a moment, but as a whole, the articulation is ample and playable. All except for those awful hips. You can get decent enough wide-leg stances (helped by the pivot ankles), but the forward/backward movement is extremely limited. This type of hip joint works fine on the Walking Dead Zombies, but a pirate on the high seas needs those sea legs. There is no ab joint, which also limits posing, but it’s excusable as the sculpts are so detailed. My one other complaint is that the plastic on the hands is so hard that it makes swapping the accessories somewhat of a challenge, so take care in switching them out. 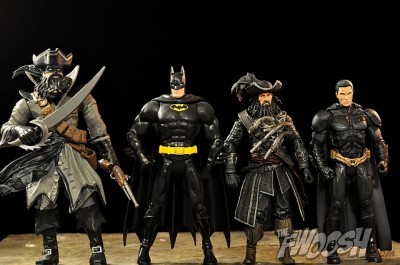 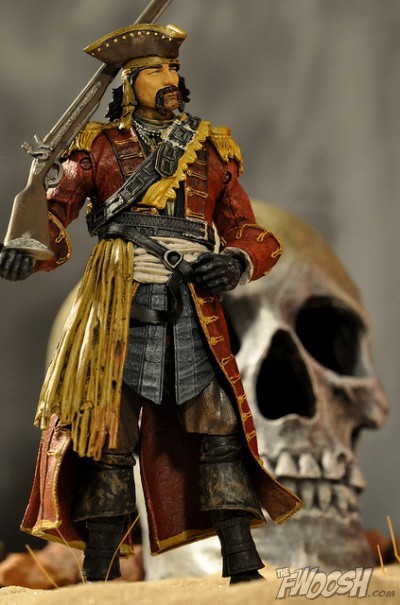 The man: Bartholomew “Black Bart” Roberts (1682-1722) was a Welsh pirate who began life at sea as a lowly sailor in the merchant navy. Not satisfied with the lifestyle of the working class poor, Roberts was eventually lured to piracy and grew to become one of the wealthiest pirates in history. Decked-out in only the fanciest of clothing, Black Bart eventually met his end in battle when he was shot in the neck with stray cannon fire.

The Figure: Black Bart has one of the most intricate and incredible sculpts that I’ve seen on a figure of this size. From his boot straps to his golden earring, McFarlane toys has done justice to the pirate known for his extravagant attire. Paint work has sometimes been a struggling point for this company, but I feel they really nailed it here. All of the little details are there and they didn’t overdo it with the wash. You can tell this guy’s prom dress has seen a little wear. The plastic used for the coat is very thin, which allows for what little movement you can get out of his hips. The tri-cornered hat is also pretty much spot-on. There are tiny sculpted buttons all along the sides and it fits his head perfectly. My one and only nit-pick is that his eyes are painted looking off to his left side. While this makes for some pretty cool displays and photos, it’s also a bit limiting. I’d rather have a more neutral eye positioning. 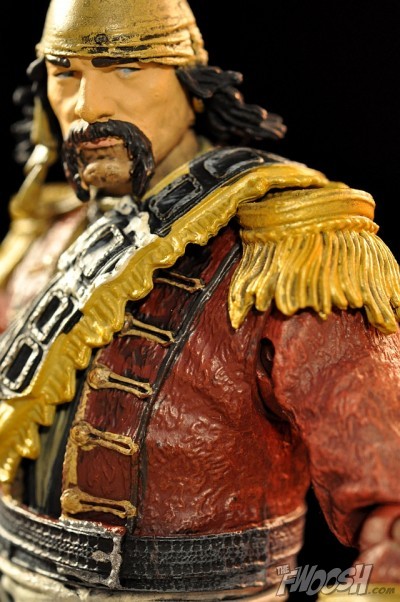 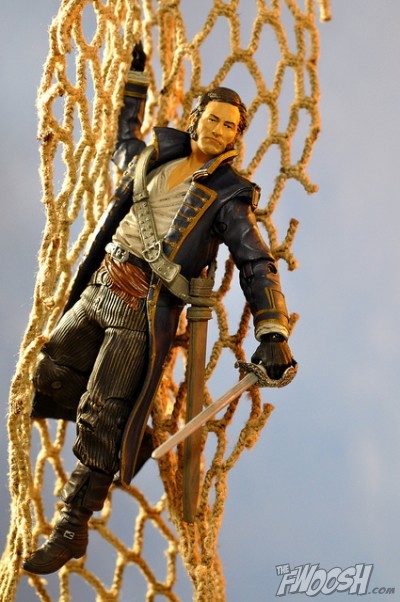 The man: Benjamin Hornigold (died 1719) is certainly not the most famous of the pirates of the Golden Age, but he has one of the more interesting and important tales. Hornigold began his career as a privateer, but eventual became a successful pirate captain with a fleet of five ships and over 300 men — including the pirate Blackbeard, who continued to sail with him even after receiving his own command. After the mutiny of his own ship (actually, he was democratically voted out), Hornigold became a pirate hunter — chasing down black flags all through the Caribbean. There are different takes on his death, but the more popular is that his ship sank after encountering a hurricane — leaving him stranded on a reef where he perished.

The figure: I bought this set for Blackbeard and Black Bart, so it came as a complete shock that Hornigold became my favorite figure of the bunch. His clothing is plain. He has the least amount of accessories. And he has no hat! I think this is why I like him. Given his historical background, you can easily imagine him as the everyman hero — like the John McClane of the pirate world. And without all those sculpted details of his pirate brethren, Hornigold has the most functional articulation. The head sculpt is phenomenal, and the paint work does its job of bringing that out. I particularly like the 5 o’clock shadow that they’ve given him. Hornigold also comes with the only scabbard of the set. It fits nicely around the figure and is easily removed. 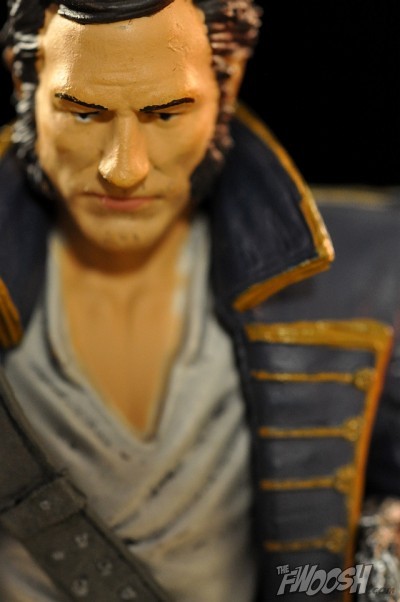 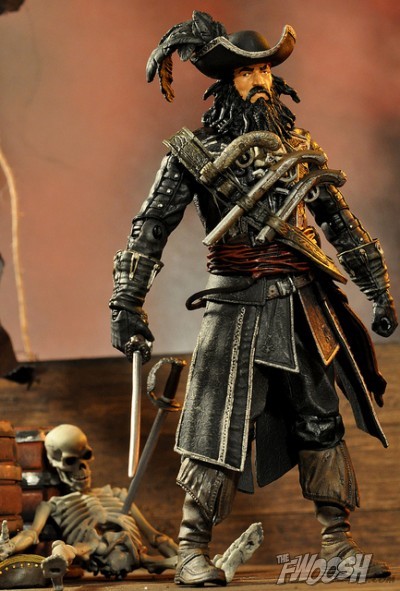 The man: Edward “Blackbeard” Teach (1680-1718) began his pirating career under Benjamin Hornigold and eventually became the most feared pirate of his time. A large man, with an even larger beard, Blackbeard carefully tailored his appearance to strike fear into those who encountered him. Despite his reputation and frightful appearance, there is no historical evidence that he ever mistreated or was cruel to either his crew or his prisoners. Blackbeard eventually met his death during a bloody battle at sea, where he sustained multiple musket ball shots and more than 20 sword lacerations before going down.

The figure: In terms of sculpt and movement, Blackbeard is on par with Black Bart. His clothing design isn’t as quite as intricate, but the work that went into the beard and feathered hat make up for that. The articulation is the same, but his ball jointed head is somewhat hindered by the beard and ponytail. Blackbeard also comes with a removable pistol holster that can hold up to four of the included flintlocks. It takes a little fidgeting to get it to lie just right, but it really adds a lot to his tough guy appeal. Blackbeard also suffers from the eyes sculpted to one side, but it’s only a minor annoyance. The figure, like the man it’s based on, is an imposing presence indeed. 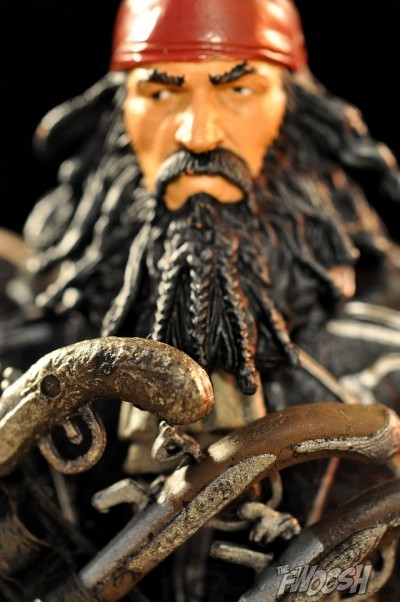 I really can’t recommend this set enough. Fans of the game, pirates, or just historical figures in general should be very pleased. Yes, the hip articulation limits the playability, but it’s a minor setback for three otherwise great figures. On top of that is the price. This is listed at just $32 on Amazon Prime. That’s just a dollar more per figure than a lot of current 4-inch offerings. So gather up those doubloons and get a set while you can! 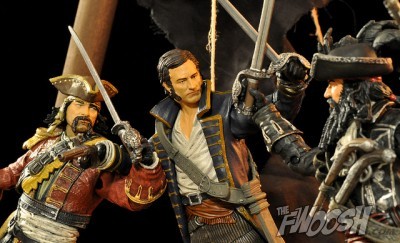 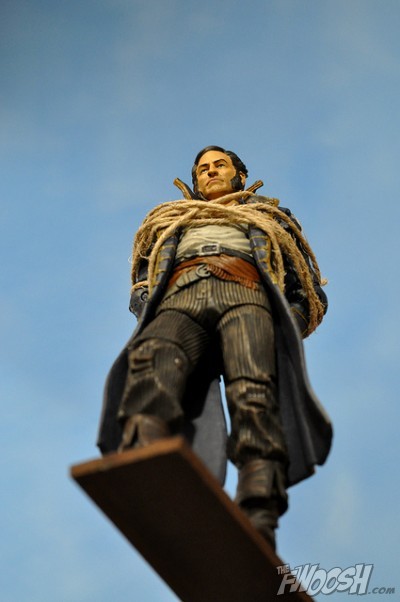 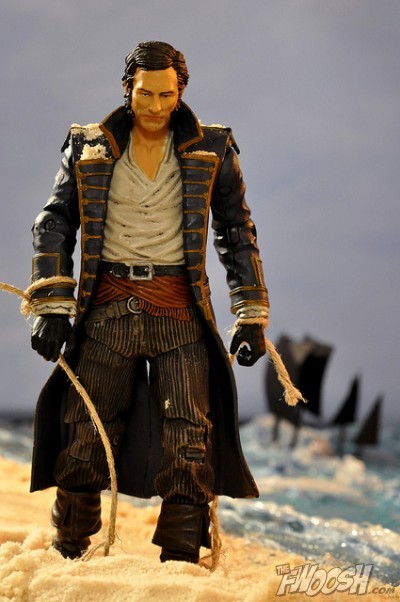