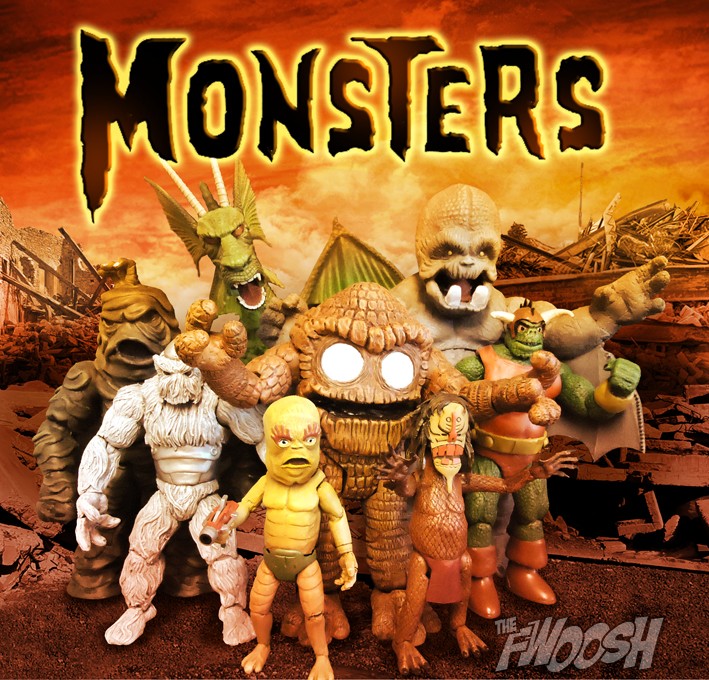 Monsters. We wouldn’t have a Marvel Universe without them. The most popular comic book heroes of today owe their existence to the freaks, creeps, and alien beasts that were Marvel’s bread and butter during the lean years of 1957 to 1962. While the rest of New York slumbered, the lights of 635 Madison Avenue blazed, the creators within documenting the latest world-conquering machinations of Titano, Gorgilla, Moomba, and dozens of other oddly-named creatures. At their core, Marvel’s wildly successful superhero books of the 1960s were just outgrowths of stock comic concepts the earlier monster books had already explored: atomic mutation (the X-Men, Spider-Man, and Hulk), cutting-edge science gone awry (Fantastic Four, Iron Man), and myth and magic (Thor, Doctor Strange). With a pedigree like that, who could argue that Marvel’s original titans of terror don’t deserve their own action figures? 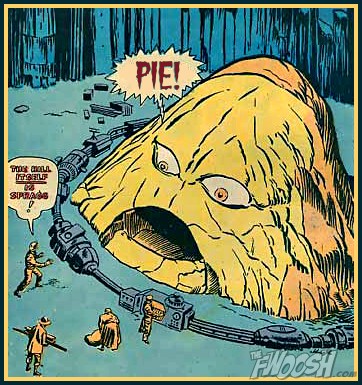 I ran down my (admittedly biased) list of top ten Marvel monsters here and here. And while Marvel Select was too busy making cookie-cutter Iron Man movie figures, Fwoosher Rob W heard the call and got busy. 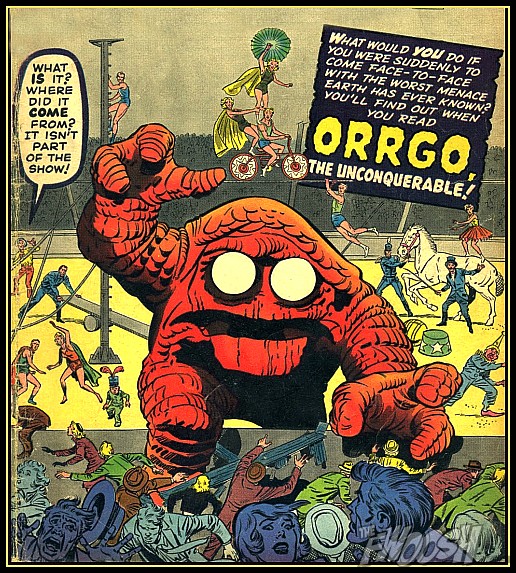 A “super-advanced” alien from a planet populated by what appear to be sentient hemorrhoids, Orrgo arrives to enslave us, but gets his skull crushed by a circus ape for his trouble — one of the many drawbacks to being 90 percent head. Time to get a padded helmet, methinks. 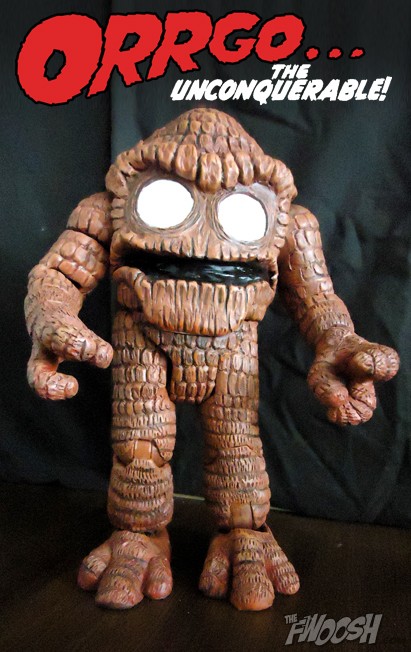 Orrgo shambles his way into three dimensions courtesy of Rob’s Zen-like patience and mad fodderizing skills. Assembled with scrap Marvel and DC build-a-figure parts, a plastic smokestack, tinfoil, electric tape, and wire, the custom comes together into a pitch-perfect rendition of the big-eyed beastie. Rob catches key Kirby characteristics like the furrowed brow and downward slope of the inside of the mouth; it’s little details like this that make this guy undeniably Orrgo. 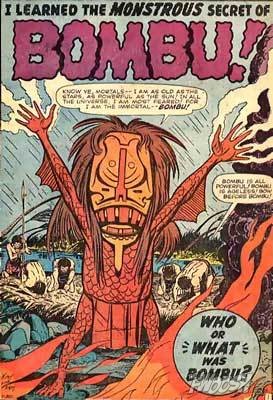 “Who or what was Bombu?” Well, he’s a Oobagonian — does that answer your question? No? Okay, then think stock Monster in the Mighty Marvel Manner: a world-conquering alien brought down by his own hubris (in this case, a bolt of lightning from a storm he summoned. Whoops!) And no, that’s not a mask, it’s his face. Tiki bar, here we come! 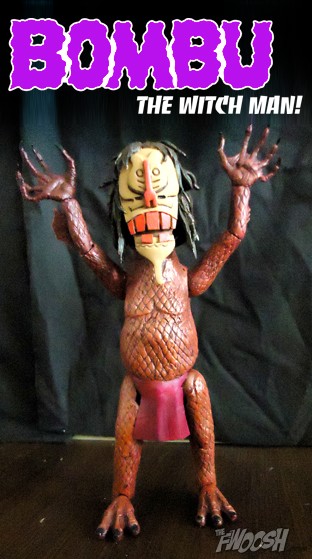 Rob’s Bombu captures the Witch-Man in all his scaly glory. It’s a wild design that would never fly today, which only adds to it’s visual presence. Bombu’s laughably human proportions and expression play against the extra-terrestrial conqueror archetype to hilarious effect, while details like its vestigial wings and clawed appendages translate beautifully into action-figure form. Plus, he’d look good hanging out on your liquor cabinet. 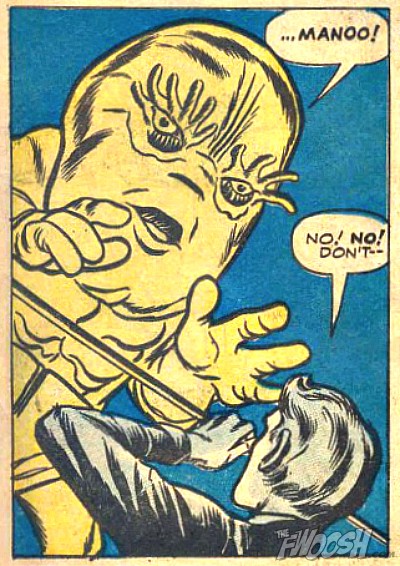 I have to admit, I’m not all that familiar with the next character, so I had to go the Internet to find out about Manoo. Here’s what I learned. “Born in August 1974 under the sign of the Leo ascendant Sagittarius, (Manoo) can’t live without music, ladies, and smoked chicken.” Now there’s a chance I was looking at the wrong Manoo just then, but music, ladies, and smoked chicken are such universal concepts that I think we can let this one stand.

Why the long face, pal? But I kid, Manoo. Rob really nails the character’s likeness; from his crazy eyebrows to his quadruple set of moobs, this is unquestionably Manoo. Accept no substitutes and bring this guy more music, ladies, and smoked chicken! “… and up from the ground came a bubblin’ goo!” Being an inker at Marvel during this period must have sucked; hey, black ink isn’t cheap, kids! But I digress. Once again, I had to do a quick Internet search to learn up on Taboo here, but the results … had less to do with swamp monsters than I expected. That said, I found a few “interesting” German websites. PM me. 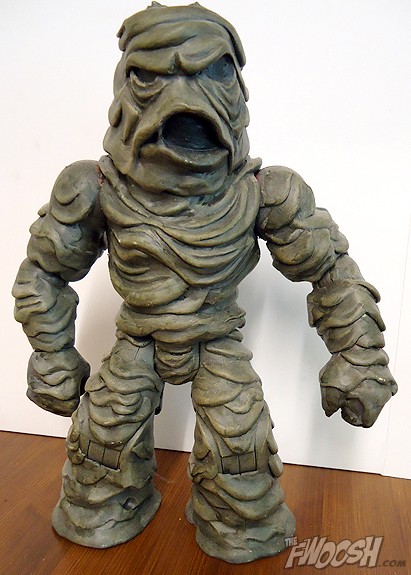 It’s hard to capture Taboo’s perpetually melting form, but Rob seems to capture him in mid-drip. His expression is great too. I’m not sure what he’s pissed about, but I’m glad I’m out of this fella’s reach. I imagine if a company like Marvel Select ever did get around to taking a crack at these classic monsters, they’d sell plenty of Taboo’s based on his similarity to DC villain Clayface. Anything’s better than rubber arms … 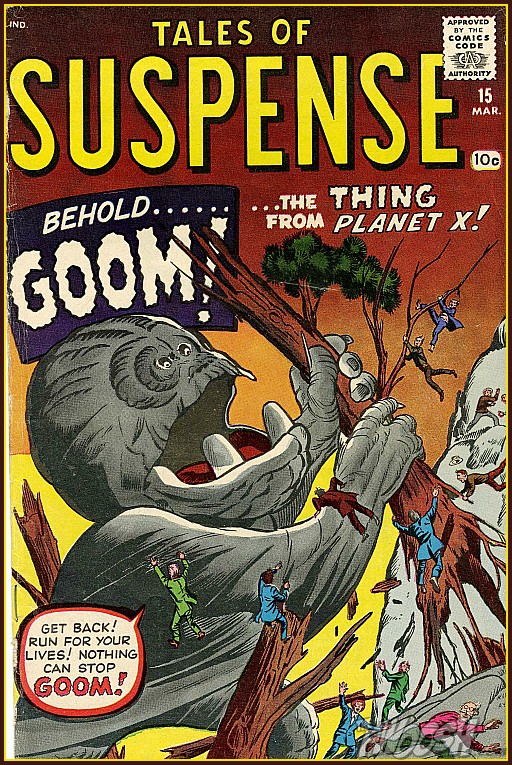 Next up, it’s fan-favorite Goom! This guy’s popularity is matched only by his cuteness, and he’s pretty darn cute. Who said being a Thing from Planet X means you’re automatically ugly lookin’? It’s these preconceived notions on our part to lead to all of these human/thing misunderstandings. Well, that and the fact these little boogers are constantly trying to enslave us. Submit to Goom’s adorable reign! Rob does a great job capturing Goom’s personality. There’s a child-like enthusiasm inherent in the design, and it comes through here. Despite his position as our new winged overlord, there’s still a goofy and engaging quality to him. 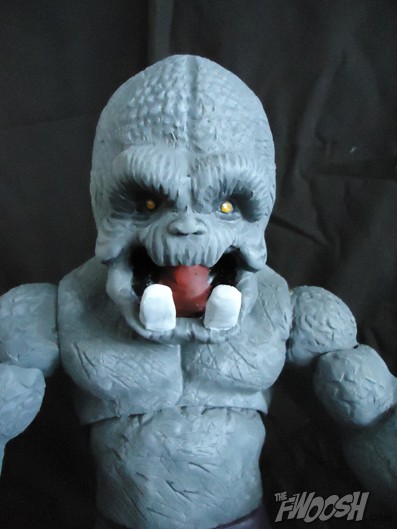 “Awww, what a chubby little cutie!” See, that’s how they get ya! Thankfully, there is still one monster left that’s powerful enough to oppose Goom. That’s right, bringing it all back home is Anthill’s personal favorite. His every word is absolute law! Statues to his glory dot the landscape! His power is beyond comprehension — his wrath is awesome to behold! Mercy is unknown … to Tim Boo Ba! Behold him and tremble! What can I say? I’ve wanted an action figure of Tim Boo Ba from the moment I read his origin story. I mean, come ON!

“Attack! ATTACK!!” Silly? Well, yeah. (Is he wearing a miniskirt?) But also unapologetically cool. And Rob gave him a removable hat! At the end of the day, I have to ask myself, “Do I seriously think that collectors will ever be lucky enough to add these figures to their collection?” I can only offer an honest “I hope so.” But this isn’t just another wishlist with pretty pictures — it’s a signpost leading from the past towards the future. Despite infrequent appearances in recent years, these monsters remain a vital and exciting chapter in the book of Marvel. With parent company Disney now producing films based on niche characters like The Guardians of the Galaxy (featuring Tales to Astonish’s very own Groot!), can Orrgo, Goom, and Tim Boo Ba really be far behind? 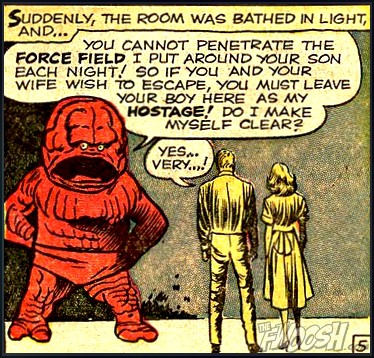 thanks to RobW for letting us feature his customs! Check out more of his fantastic work here!