The Star Wars 6-inch Black Series delivers it’s first bonafied “heavy hitter” with Han Solo in his “A New Hope” signature white shirt and vest, and it is a very welcome addition to the small, but growing, collection. Sure, Boba Fett, who is often considered a heavy hitter himself, was released at SDCC and again in this same wave, but many people disagree on his importance and relevance in the franchise. Han Solo, though? There has never, ever been such a debate.

While wave one of the 6-inch Black Series was fairly diverse in terms of the assortment,  Wave two is definitely the “Han Solo” wave. We get Han in his classic duds, his scantily clad girlfriend, and two of his key adversaries. Clearly, this wave is all about Han, and it feels great to get a classic, defining look for a major character. All that’s missing in this assortment is Han’s best friend, but hopefully he shows up sooner rather than later.

I love the packaging for this series more than I’ve ever loved any packaging from any retail-level line, but they do tend to go kinda light on the details and the info. I guess the assumption is anyone who’s willing to spend $20 a pop is already very familiar with the characters, so a bio on the back isn’t really necessary, but I can’t help but think it would be cool if we were to get just a little more than what we’re currently getting. The above image showcases the extent of the information we’re given about the character, along with a quote from the character, and… it isn’t much. But whatever. It’s packaging and it’s headed for the trash can anyway, right? Truth be told, I’ve been very tempted to keep a second boxed set for display purposes because I’m that fond of the packaging.

Han looks great in his packaging, but one question everyone has been asking is why did they decide to outfit him with the Stormtrooper belt in the package rather than his regular belt and holster that comes packed as an accessory? It’s not a big deal, but it’s just enough to make a lot of people scratch their heads. The Stormtrooper belt may reflect a fun, memorable sequence from “A New Hope,” but it’s not really part of his iconic look, which this figure otherwise captures. 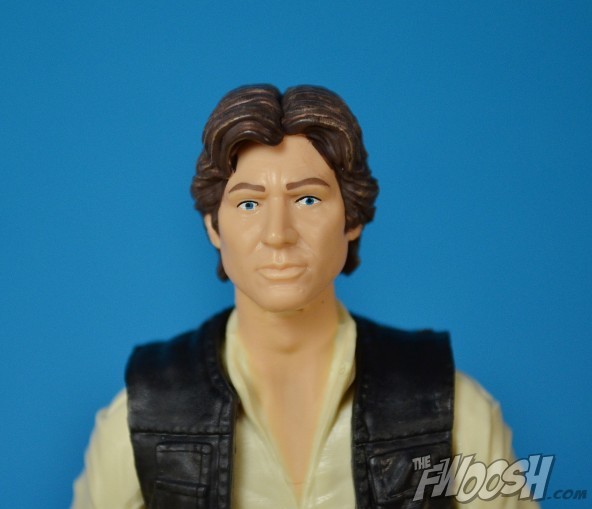 Han’s head sculpt is solid and it is definitely reminiscent of Harrison Ford. It’s not an exact facsimile or anything, but it’s close, and there’s no mistaking it for anyone but Han Solo. His hair is just about perfect, but I wish his eyebrows had been included in the sculpt rather than just being painted on. It’s the one area where the realism is compromised. Otherwise, it’s a better than decent Han Solo head sculpt for a retail figure. 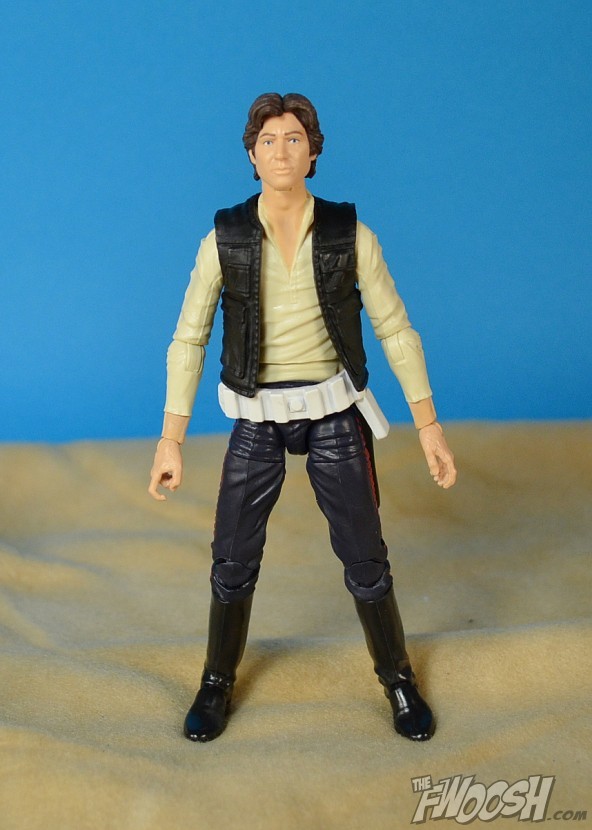 The overall sculpt is satisfying and suits the character well. The off-white color of his shirt, the shiny boots, and his signature vest all capture Han Solo’s look perfectly. Many people have pointed out that his neck is just a touch too long, and I’ll agree with that. It’s too long by just the tiniest bit, but it does make a difference and makes him look a bit giraffe-necked, particularly when the vest is off. This all depends on the angle, of course, and it is possible to pose him in such a way that mitigates the effect.

In addition to the Stormtrooper belt, he also comes with one of their blasters. I have to say I appreciate how his hands are sculpted so as to allow his holding the blaster in a convincing, realistic way. I love it when the index finger can actually be placed on the trigger.

The Stormtrooper blaster can be held securely in the holster that hangs from the belt. It doesn’t slide in very far, however, and it rides up his back a bit as a result. I don’t expect to be displaying him with the Stormtrooper belt much, though, so no big deal. And fortunately it’s very easy to swap out the belts. 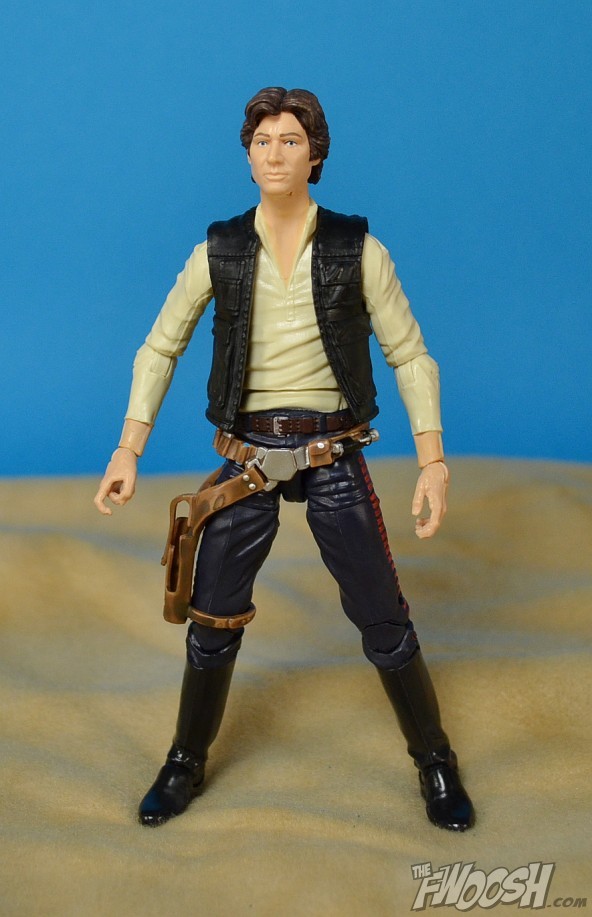 What a difference a belt makes, right? This belt and holster combo completes the classic “A New Hope” look from ’77, and it looks freakin’ awesome. I love the way the belt sags the way it did in the movie, or at least in a similar way. It was a little bit of a challenge to get it on him, though. The belt itself fastens  just fine, but the bit that secures the holster to his leg just above his knee took some fiddling to get it on there right. It’s a solid piece, so it has to be slid over his foot and up his leg.

Getting it up over his foot is what gave me some trouble because it’s a very tight fit and I was scared I was going to tear the soft plastic as I forced it up. That didn’t happen, fortunately, but it definitely made me a little nervous. Once it’s on, it looks awesome. 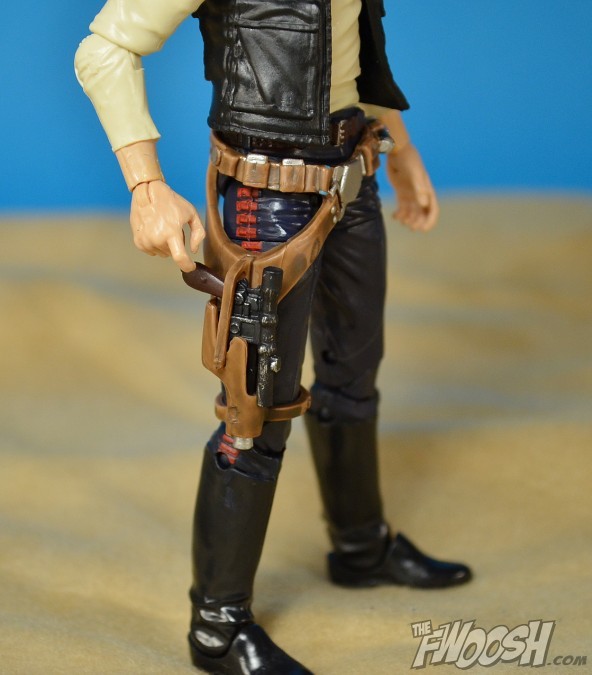 His blaster fits snugly in the holster, and thankfully this is not just one solid piece. The clip that holds the gun in place detaches at the lower point on the holster to allow the pistol to be inserted and removed with ease. And as little as I’m sure I’ll be using the holster, it does look cool with the gun in place.

His pistol looks just how I remember it from the movie. It’s made of a softer plastic, which is probably its only downside. It’s got just the right amount of silver dry-brushing and weathering to give it a touch of realism. It looks great.

The sculpt of the belt, and the of figure in general, looks great from every angle. I think Han is easily one of the stronger figures from the line so far.

His articulation breakdown is as follows:

It’s easy to get him into just about any pose you like. The only thing I’d like to have seen done differently is his elbows. The Hasbro elbows he has don’t have the greatest range of motion, or at least not as good a range of motion as a set of double elbows would have.

He comes with a pair of swappable gloved hands that are fairly easy to change out with a swift tug on his hands. The gloves aren’t something I really remember from the movie enough to be happy to see them included, but their inclusion adds play value to the figure, so I’ll take them. I probably won’t display him with them much because, honestly, that left hand is sculpted in a bit of an odd and overly dramatic pose.

It makes Han look as though he’s trying to use the Force. I’m not sure what it’s intended to convey. I much prefer the more neutral non-gloved hand.

It’s hard to pick a favorite from the line so far, but Han may very well be it for me, and I’m not even that big a fan of the character, so this time it isn’t the usual character bias that makes up my mind for me. He’s just a great figure all around and a strong entry in the Black Series line so far. He’s fun and has lots of play value, and he looks great when just posed up on the shelf. It you’re a fan of the 6-inch Black Series at all, then it goes without saying that you must track down a Han for yourself.