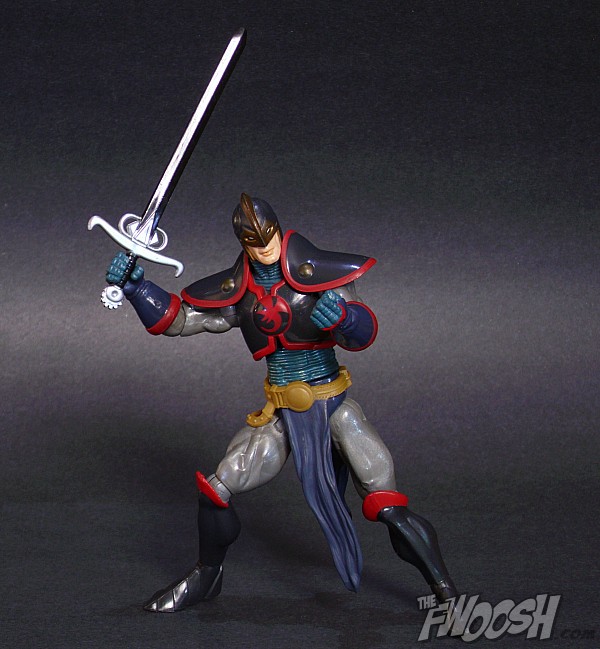 The Black Knight arrived in wave three of Hasbro’s 2007 continuation of the Marvel Legends line. After years of waiting, fans of Dane Whitman eagerly opened their figures only to say “…the Hell?” While this is undeniably the Black Knight, the choice to produce the character in this less-than-iconic costume had more than a few collectors scratching their heads. But is this a bad figure? Well, let’s take a look! 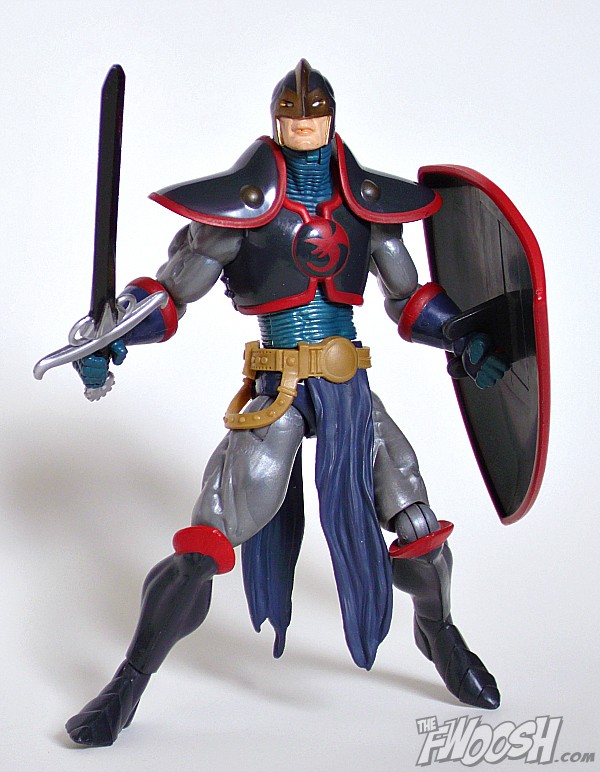 As far as the sculpt goes, BK is just okay. It’s not there’s any one area that’s bad, but there’s just not much real detail here. Yeah, the helmet looks nice enough and the weird ribbed armor on the torso adds a little visual flair to the proceedings, but on the whole this figure is very soft. The new costume is a big factor; it’s rounded edges and hard, smooth surfaces are marked contrast to the Black Knight’s usual attire: 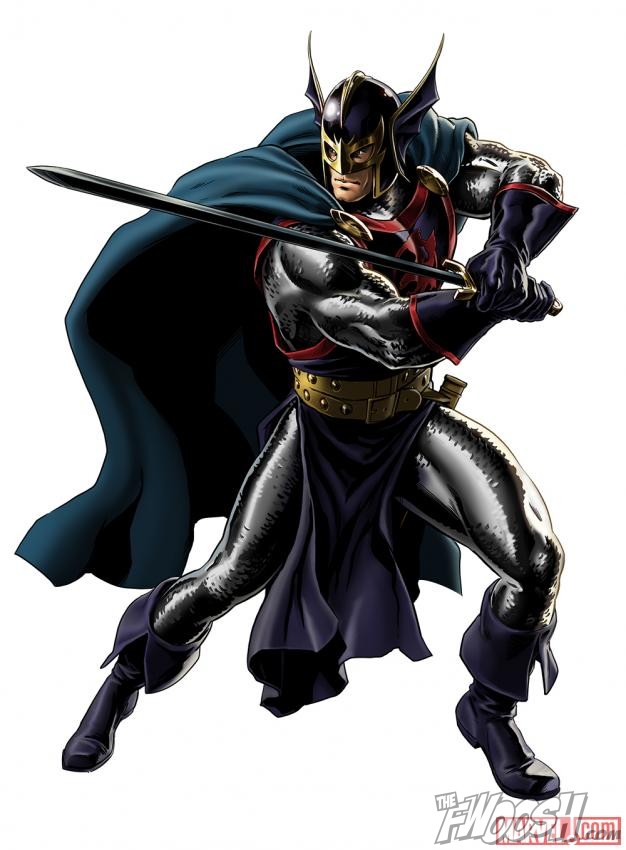 Two things: Black Knight wears a cape and chain mail, and he buys his boots at the same store Captain America shops. It’s a look that tells you everything you need to know about the character at a glance. Tinkering began back in Avengers #357 with the addition of a leather jacket (ugh) and an “energy sword” (double ugh), but things got ugly when Black Knight showed up for work one day wearing this: 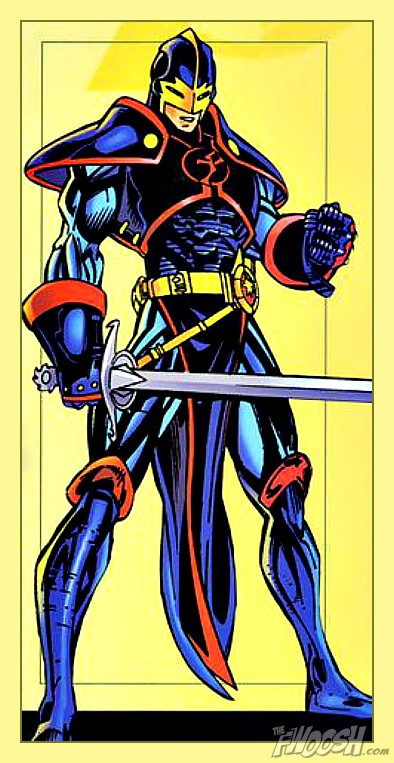 If there’s an actual person in there, he’s gotta have some mighty weird proportions. And what is the armor on his legs and arms made of? It’s strong enough to deflect a blow, but flexible enough to bend with his knees and elbows? This may seem off-topic, but it’s not because this is the version we were saddled with. 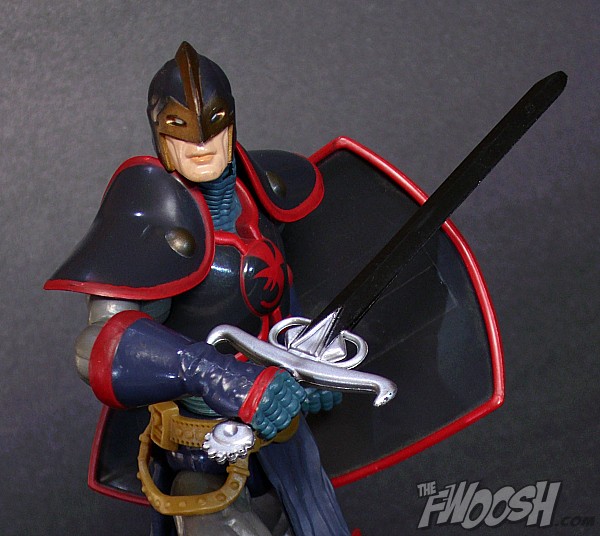 Does anyone else see Adam West in this portrait? I’d never noticed before, but now I can’t unsee it. It’s a great sculpt and easily the best part of the figure — but it doesn’t really scream “Black Knight” to me. 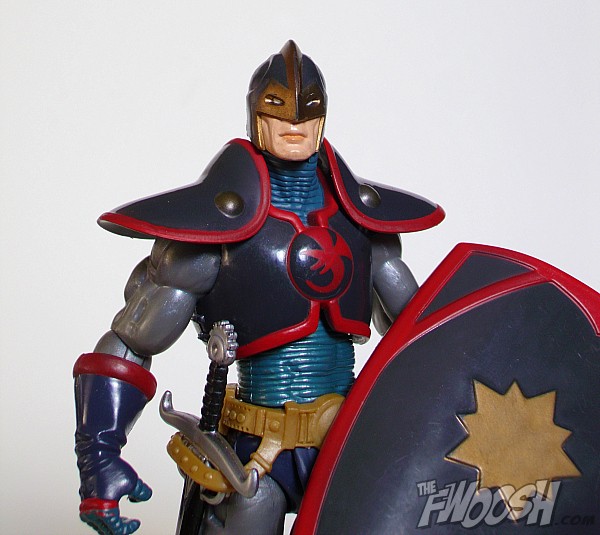 From the neck down, Black Knight resembles a cheap toy you’d find in one of those “Everything’s a Dollar!” stores. That may seem like hyperbole, but look at him. A soft and almost featureless sculpt, wonky articulation, and oversized accessories scream cut-rate. Dig his shoulder pads. Forget the impracticality of wearing these in a combat situation, how does this guy fit through doorways? 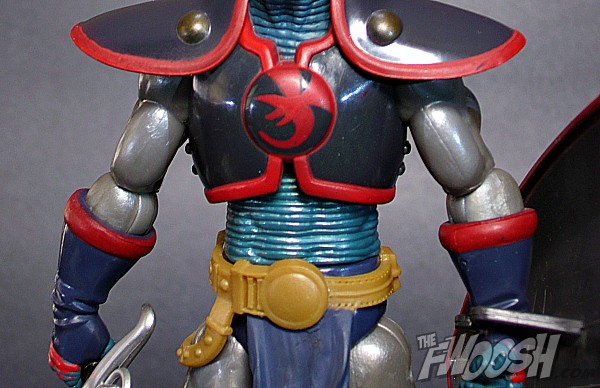 The figure’s midriff looks more like insulated electrical cable than a human torso. Once again, there’s supposed to be a guy in there, but that doesn’t really come across. The unpainted belt is helpfully glued on off-center so it can never be pulled up to disguise the problem. Thanks for that. What else? Oh, yeah, the sword and shield look like scaled-up Playmobil accessories. 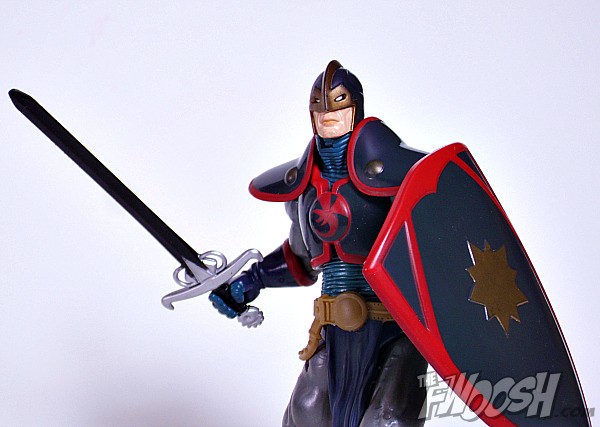 On to paint work. Well, there’s red, some blue, a little gold, and … uh, that’s it. The paint that’s here is thin and inconsistent, making the already cartoonish sculpt look even more toy-like. Once again, the face is the best part of the figure. The small amount of flesh-tone present looks natural enough, the darker shade used on the lips providing some contrast and realism to the otherwise bland apps. 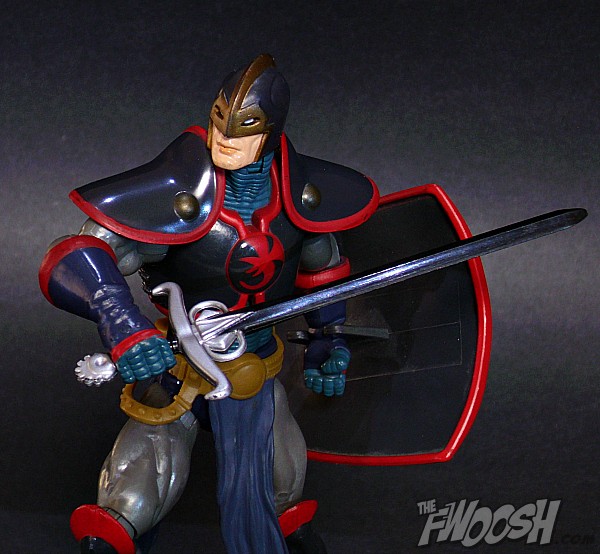 It’s pretty shocking even today to witness the abrupt drop in quality Marvel Legends suffered during the transition from ToyBiz to Hasbro. The figures went from highly-detailed collectibles to something you got free with a kid’s meal. 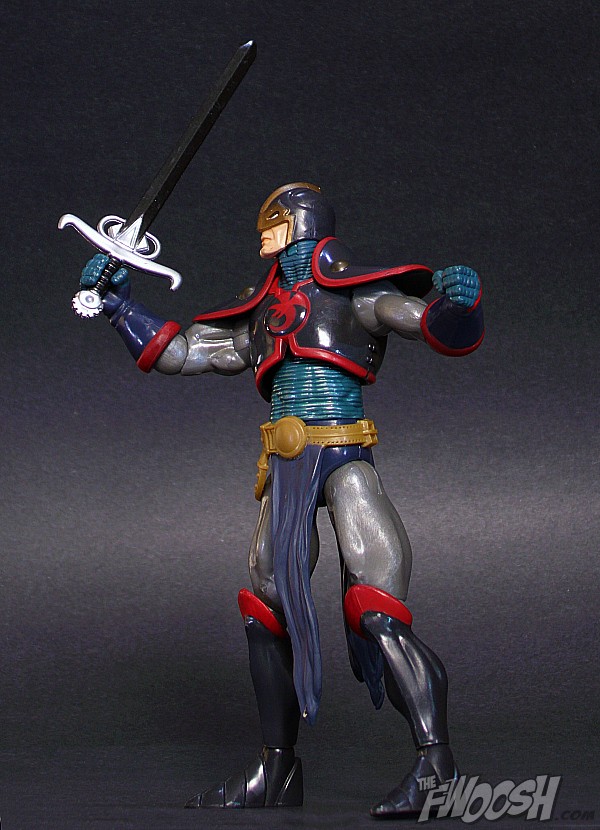 On the articulation front, Black Knight features ball joints in his head, shoulders, elbows, torso, hips, knees, and ankles, as well as swivel cuts in his gloves. The lack of true elbows is weird, but his missing kneecaps are at least hidden by the flare of the boot cuff. If you’re familiar with Hasbro figures of this period, you know how limited in range their early ball joints were. The Black Knight can move, but not much and not well. 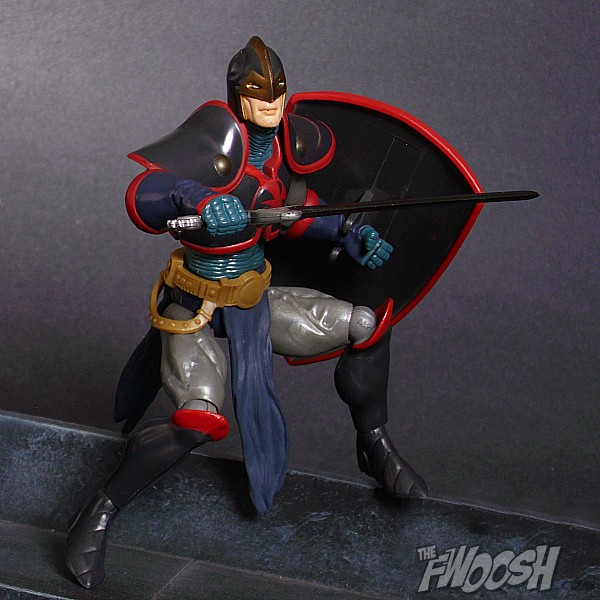 So — Hasbro Black Knight. Originally I had him slated for my “What Were They Thinking?” column, but instead decided to do a straight review. After all, comic characters change costumes all of the time; it seemed wrong to single out the figure just for that. I should have gone with my gut; this guy’s existence is one big question mark. From his blink-and-you-missed-it “new” costume to the cut-rate work on the figure as a whole, Hasbro’s Black Knight is a telling example of how far a once great toyline can fall. 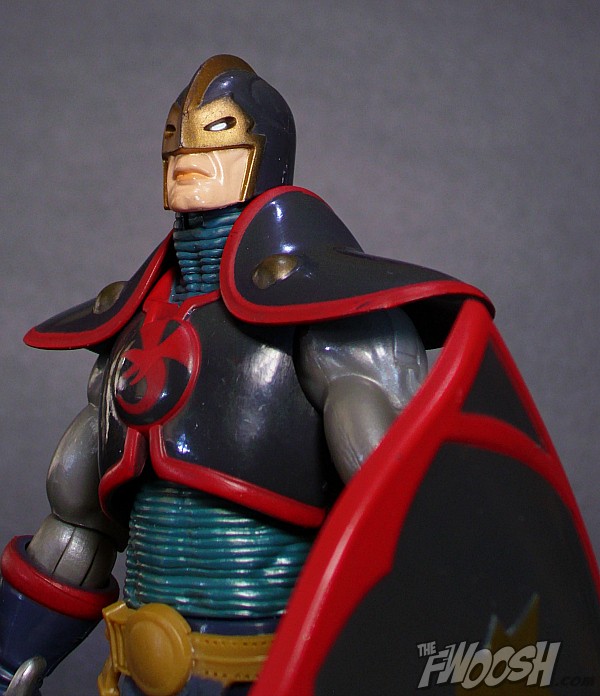 There seems to be an irresistible desire on the part of Marvel to update the Black Knight, but every time they do he loses part of what makes him a unique character. He works best as a walking anachronism. Hopefully Hasbro will try again and give us the classic version of the Black Knight we’ve been waiting for. 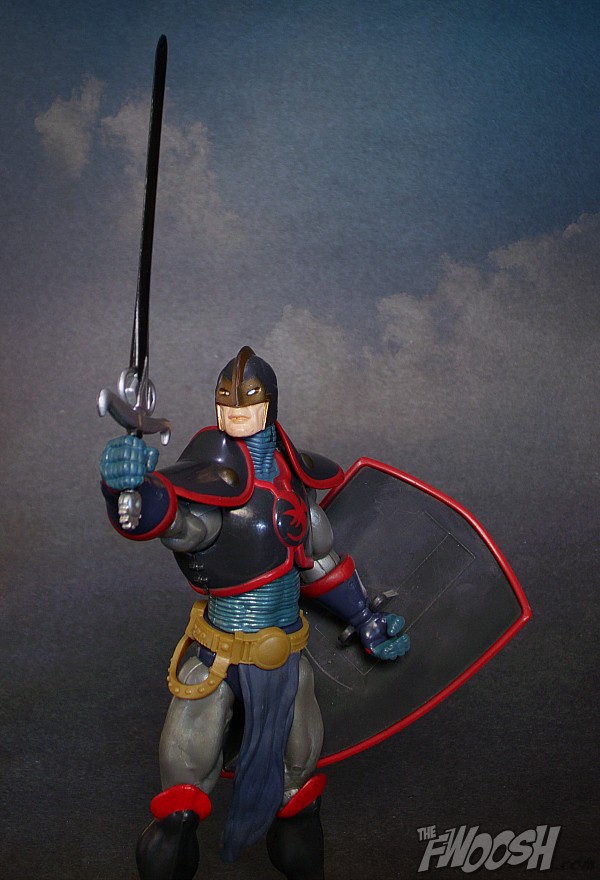