There have been cranky Doctors, funny Doctors, quirky Doctors, and just plain odd Doctors, but there has only been one really “cool” Doctor, and that’s the 3rd Doctor. Jon Pertwee played the Doctor from 1970 – 1974 with so much style and confidence that at times it felt as though he was playing an entirely new character. He was cool, capable, confident, familiar with technology, and he even knew a bit of Karate(!). This Doctor was as close to James Bond as any incarnation has come before or since, and this characterization is one of the key aspects that makes him unique among his peers — he’s the only real “action hero” among all the Doctors. And I have a sneaking suspicion the 3rd Doctor’s look was, at least in part, an inspiration for Mike Myers’ Austin Powers. 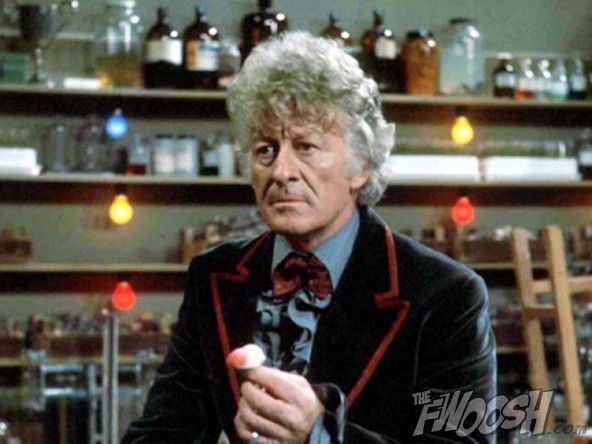 He could always be seen in a velvet smoking jacket, a ruffled shirt, and some manner of tie — bow or otherwise. He just looks so darn cool! Not many men could pull off this ensemble, but it looked so natural on Pertwee that is was difficult to picture him dressed otherwise. He is the definition of “suave.”

Character Options issued several versions of the 3rd Doctor, many of which feature different color smoking jackets to reflect his appearances on the series. The two featured here are based on a couple key looks of his from the show, but neither is necessarily “definitive”; they’re simply the two I felt would fit best in my classic Doctor Who collection. 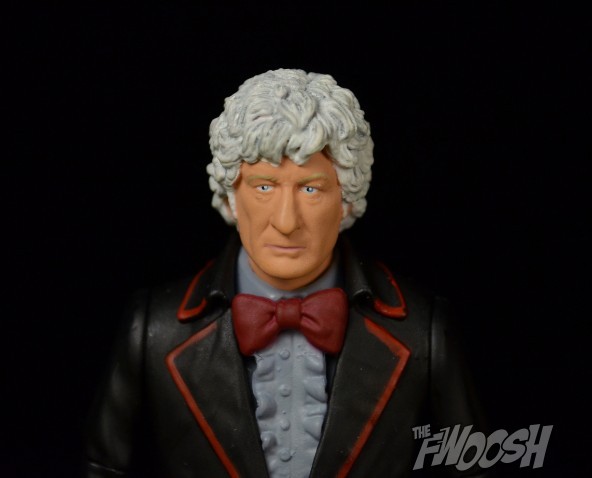 Each version of the 3rd Doctor features what is basically the same head sculpt. It captures Pertwee’s likeness nicely, right down to his mop of silver hair. It’s another stoic, serious expression, but it’s one that actually suits this Doctor well. He was a serious man who took himself and every situation seriously.

It’s an excellent sculpt that features exactly the right amount of paint apps. Since it’s cast in primarily flat black plastic, his paint apps aren’t extensive, but what’s there works and emulates his look on the show perfectly. Sometimes I really think this is my favorite of all my Doctor figures, and the fact that I’ve gained such a fondness for the character doesn’t hurt this figure’s status in my collection at all. After Tom Baker, I’d have a hard time choosing a second-favorite Doctor — it would be either Tennant or Pertwee here, but it would definitely be a “Sophie’s choice.” I think Pertwee would win in the end, though. 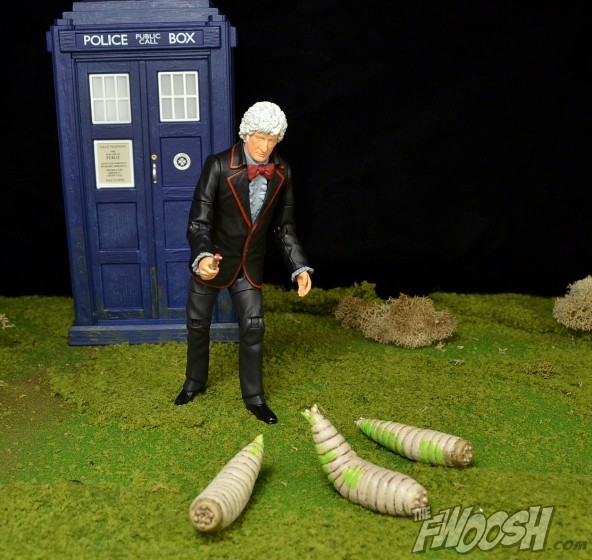 This figure came with three green maggots from the episode titled “The Green Death.” They’re not the most exciting pack-ins, but “The Green Death” is probably my favorite 3rd Doctor story (more on that in a bit), so I’m still very pleased to have them. 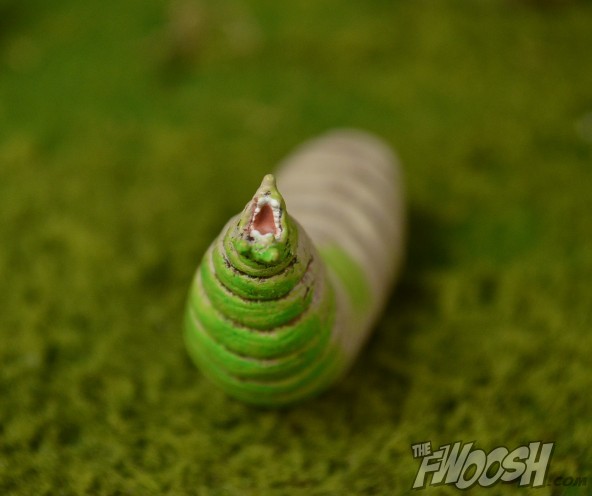 The maggots are sufficiently gross, and a lot of care went into making them so. They’re not posable, but they’re made from a soft, rubbery plastic that, at first, gives the impression of articulation in a bendy-toy sort of way. 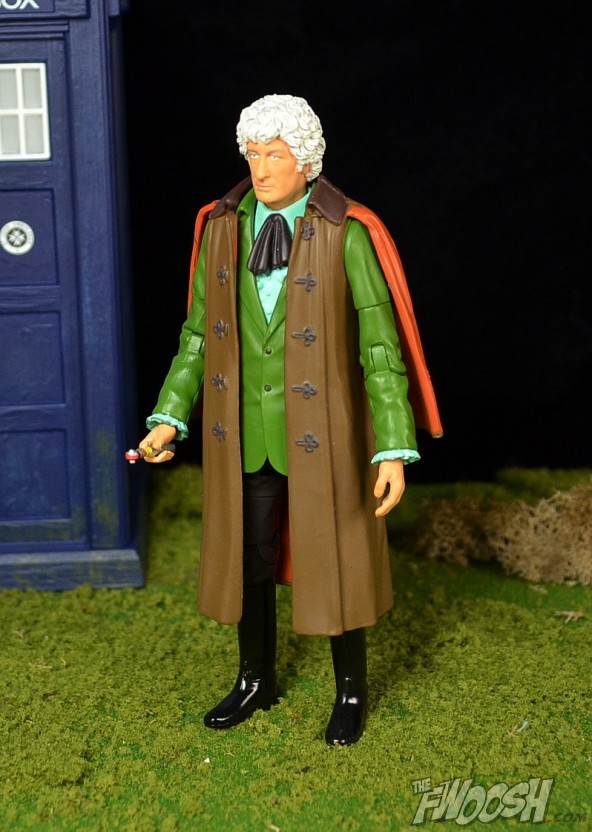 The 3rd Doctor was also often seen in boots and an overcoat, which is what we see here. This version is the one that came in the 11 Doctor box set, and it’s not one of my favorites, but it comes from a story arc that I think is one of my favorites from the 3rd Doctor’s tenure: “Carnival of Monsters.” The colors here are a little brighter and more obnoxious than they appeared on TV, but I still had to have it.

Another thing that made this Doctor unique is that for a good portion of his run he was stranded on Earth with a disabled TARDIS. This was a punishment handed down from the Time Lords. In fact, the 2nd Doctor never “properly” regenerated — the change to the 3rd Doctor was forced as another condition of this punishment. He spent much of his time here as an adviser to UNIT, a military organization not terribly unlike Marvel’s SHIELD.

He was joined by several companions along the way, the best known of which is probably Sarah Jane Smith, but as I mentioned in the 4th Doctor’s article, we’re still waiting for a proper figure. Character Options did see fit to issue one of his companions, however: the lovely Jo Grant.

This particular Jo was released as part of the Three Doctors box set and does a nice job of capturing her look from the show. She is perhaps one of the most fondly remembered companions due to her wild-eyed sweetness and innocence, which were the perfect attributes to launch her into the pages of — yup — Playboy Magazine. Katy Manning, who played Jo Grant, was actually featured in Playboy where she posed nude with a Dalek — it’s exactly as … interesting … as it sounds. 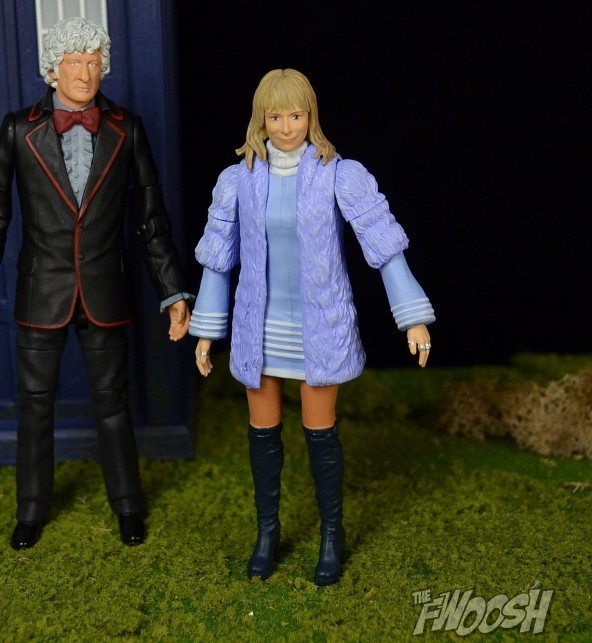 Jo Grant’s figure features interchangeable arms that allows you to display her with or without her fuzzy blue Muppet coat. She looks great and is such a product of her time — the perfect cross between mod and hippie. I love that Character Options actually succeeded in making her look “feminine,” which is something many of the other major toy companies could take a cue from.

The episode where she leaves the Doctor is the final episode of “The Green Death” story. She chooses to remain behind and marry a young hot-shot scientist rather than accompany the Doctor on more adventures, and it’s the Doctor’s reaction to this that has cemented him among my favorite versions of the character. While a party is toasting the happy couple, the Doctor slams his drink and simply leaves without saying a word. Jo looks for him, but sees that he’s left, and her expression carries the weight of the moment. He’s so cold and cool about it that I couldn’t help but admire the character, and it was my first indication that the Doctor may be capable of heartbreak. Solid stuff. I love it. 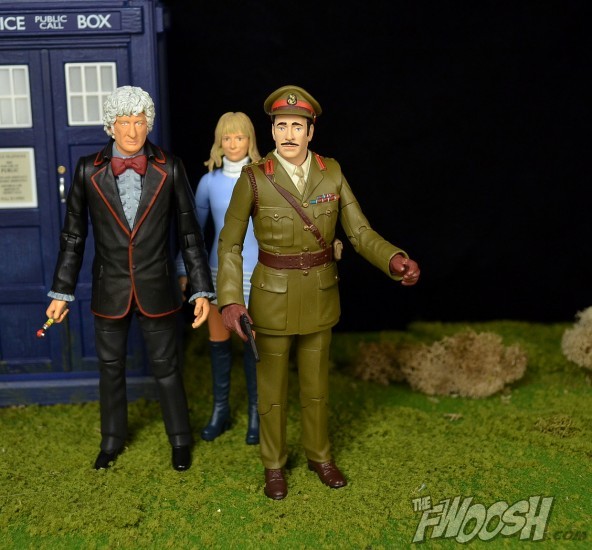 Also included in the Three Doctors set is Brigadier Lethbridge-Stewart, whom I was so happy to finally get in figure form. I don’t know what it is exactly about this character, but I love him. He sort of reminds me of Graham Chapman’s “No, no, much too silly” character from Monty Python’s Flying Circus, but without any of the humor or irony. The Brigadier is played so straight-faced and with such authenticity that you can’t help but hope he’s on your side. And fortunately for the Doctor, he is. I wouldn’t call the Brigadier a “companion,” because their relationship isn’t quite as lopsided as that would suggest, but maybe an important colleague. 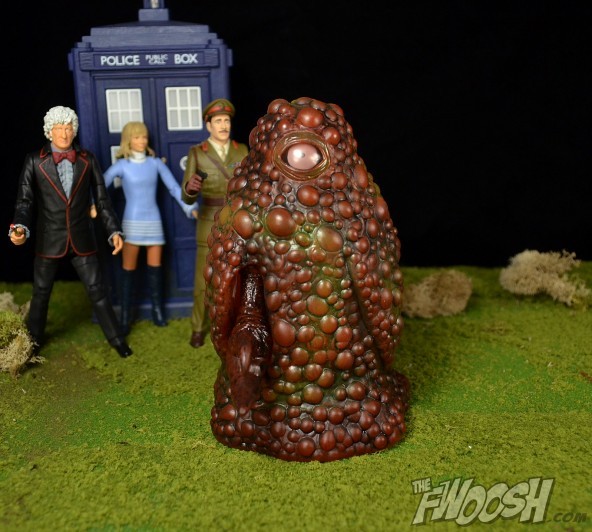 Finishing off the Three Doctors set is the Gel Monster, one of the key challenges the Doctor must face in “The Three Doctors.” It’s just a hollow rotocast figure with just one moving part, but the paint job on it is fantastic. It looks completely gross and maybe a bit more realistic than it did on the show.

It’s claw-like thing is its only moving part, and it can only move up and down ever so slightly, so it’s more of a prop than anything else, but it’s awesome to have more of the Doctor’s absurdly low-budget monsters from the ’70s on the shelf. It’s something that makes the series and the collection so darn endearing.

All versions of the 3rd Doctor can be found on eBay, but some are pricier than others. In fact, the key reason why I only own these two is because the other ones I’d like to add to my collection tend to run just a bit more than I’d like to pay. Regardless, if you’re a fan of Doctor Who at all, it goes without saying that you need to add at least one version of the 3rd Doctor to your collection. I’d personally recommend the one with the black smoking jacket. He looks awesome and can still be had fairly inexpensively.