Simply put, 2nd Doctor is the most important Doctor of them all. Why? Because this was the first time the show’s creators attempted a regeneration, originally referred to as a “renewal,” and nobody was sure whether or not it would work. The show was still very much in its infancy, and William Hartnell was “The Doctor” as far as anyone watching the show at the time was concerned, so when Patrick Troughton assumed the role of the Doctor in 1966, it wasn’t a guarantee that audiences would go for it. Replacing a television show’s leading man is an extremely risky proposition for ANY show (except for Two and a Half Men, evidently), so the writers had the right idea by writing the transformation right into the show and into the Doctor’s very character. It was an idea that fortunately paid off, and 11 (12?) regenerations later, Doctor Who is still going strong without any signs of slowing down. We have Partick Troughton to thank for that. If he hadn’t been able to pull it off as well as he did and effectively sell the idea of a regeneration, Doctor Who may have died a quick death way back in 1966.

Everything about Troughton’s Doctor was a departure from Hartnell’s 1st Doctor. His attitude, his appearance, his strengths, and his relationships with his companions all signaled something new for the series, and this was exactly the correct way to do it. Had Troughton simply tried to be Hartnell, it never would have worked because it would have come off as a transparent attempt to dupe the audience, but Troughton managed to make the Doctor his own, and he remains one of the more popular Doctors to this day.

His Beatle-esque haircut (some will say Moe from the Three Stooges, but I totally disagree with that); his sloppy, hobo-like clothes; and his fondness for making music with his recorder all served to make this Doctor unique, even to this day. And Troughton was the inspiration for Matt Smith’s desire to outfit his Doctor with a bow tie. Bow ties are certainly cool, and apparently very much ingrained in Doctor Who history. 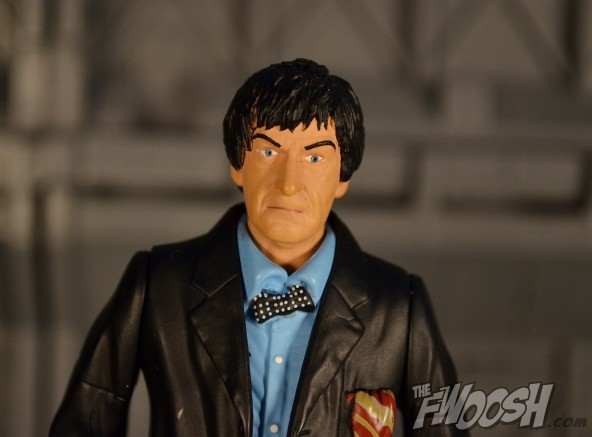 Character Options’ figure based on Troughton’s 2nd Doctor is definitely one of my favorites from the entire Classic series. They nailed his likeness and his disheveled look perfectly. There aren’t many figures based on this Doctor available, but that’s OK since this one pretty much nails it. There are slight color variations available, but I do believe this is the only mold.

What’s interesting to me about this Doctor is that based on the figure’s head sculpt and whatever still images I’d seen, I always assumed he was a grumpy, mean old man. I never saw any of his episodes in my youth, and since many of them have been “missing” for decades, many of them still aren’t available to view in their entirety. It’s only in the past year that I’ve sought them out, and I was pleased to learn that I was completely mistaken in terms of my assessment of his character. He’s actually a charming, fun, energetic, and intelligent Doctor whom I would most liken to Columbo — sometimes he plays the fool as a way to manipulate a situation to his own ends, and it totally works for him. 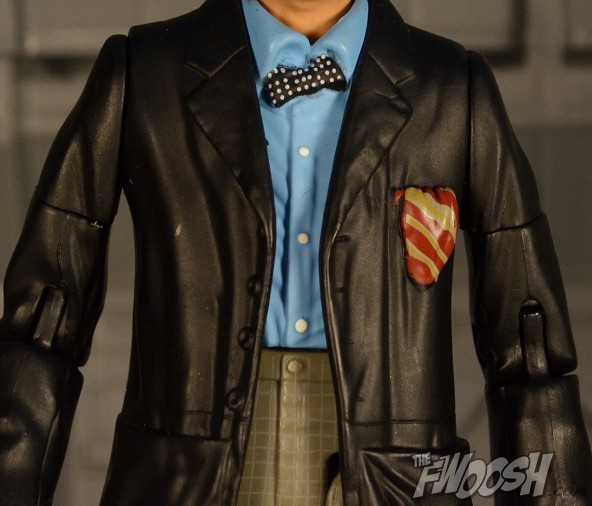 His design and outfit are pretty basic. Baggy black jacket, polka-dot bow tie, blue shirt, handkerchief, and a pair of trousers pulled alllll the way up — there’s nothing fancy about it, but it’s still totally unique and definitive. Character Options did a great job in capturing his sloppy look down to the last detail, and the result is a figure that stands out among his peers.

The haircut and even his boots (they totally look like Chelsea boots or “Beatle” boots) are very much a product of their time, but they have also become rather timeless. Troughton carried the mantel of the Doctor from ’66 to ’69 while Beatlemania was definitely still going strong. His disheveled look carried a certain mod appeal with it, which does anchor him to a certain time and place in Great Britain, but this isn’t at all a detriment to his character as it serves to remind us of Doctor Who’s British pop-culture roots. The 2nd Doctor was actually kind of hip in a way. 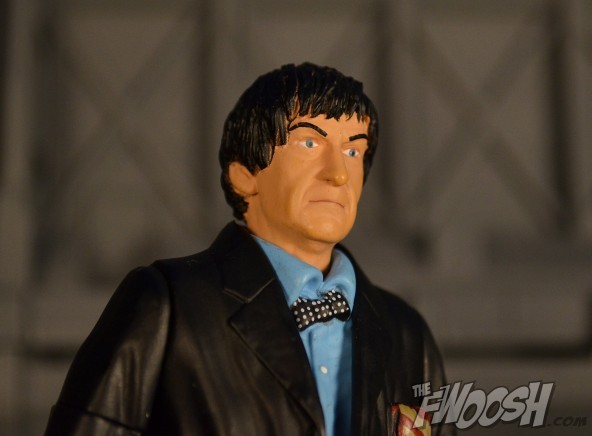 The Doctor’s Sonic Screwdriver may have made its debut during the 2nd Doctor’s run, but it wasn’t yet his defining instrument, so it makes sense that this Doctor would come packed with his trusty recorder rather than a sonic. Now, I really wish it were possible to pose him in such a way as to make it look as though he’s playing his recorder, but given the limitations of the Character Options articulation scheme, holding it aloft is the best he can do.

The articulation scheme on all of Character Options’ Doctor Who figures is limited, but it seldom feels as though the figures are being held back in terms of getting them in poses we would actually see on the show. This is one of those rare occasions where the limitations are definitely felt.

I got this particular Doctor loose on eBay from a seller in the UK, and it appears to have come from the 11 Doctor box set. I paid a premium for him too since he is one of the more sought after and popular Doctor Who figures from the Classic series. The good news is he was recently reissued as part of a Dalek 2-pack and can be had at the usual online retailers. The Dalek he comes with, I believe, is the same one as pictured above, so the 2-pack is an easy way to get a good 2nd Doctor figure and an awesome classic Dalek.

We have just one more Doctor to go in our countdown to the Doctor Who 50th anniversary next week. Be sure to check back next Friday for our look at the one that started it all: William Hartnell’s 1st Doctor!