It’s time for the Monster Mash here at the Fwoosh as we take a look at one of ToyBiz’s final box set offerings in the Marvel Legends line! 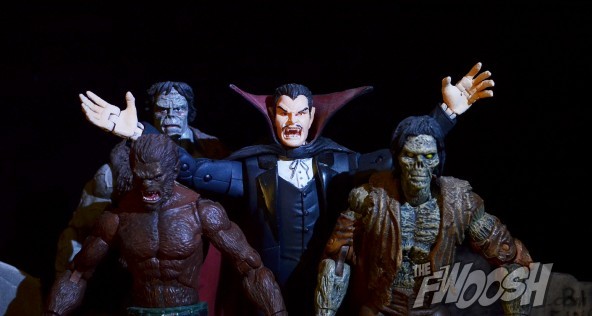 It’s difficult to look back at what Marvel was up to in the ’70s and not feel a little bit of glee. The horribly oppressive Comics Code, which made darn sure no comic book was going to inspire any teenager to murder their entire family with an ax, was reevaluated, and comic creators found themselves with a little more freedom and room to grow creatively. Marvel got right to it and entered the horror business with a series of titles that featured various monsters in the starring roles — something we hadn’t seen since the ’50s when the Code was implemented as a way to neuter such comics. Marvel introduced some original horror-inspired characters like Man-Thing, Morbius, and Brother Voodoo, and they also gave us their own interpretations of some of the best-known horror characters ever, like Dracula, Frankenstein, and the Wolfman.

As a child of the ’70s, I’m old enough (ugh) to remember seeing these comics on the racks at my local drugstore. My mom would buy me the occasional issue of The Tomb of Dracula after lots of begging and pleading from me. The deal was I could have it and read it, but if it kept me up at night with nightmares, then I couldn’t have any more. These always gave me nightmares. I was too young to really be able to separate fantasy from reality, so even these comic books were enough to scare the wits out of me. I loved it. And, as such, I look back on that time and at these titles with great fondness and tons of warm fuzzies — exactly what horror stories should inspire, right?

When news of this set first leaked, I freaked out. I never wanted a set of toys in my life as badly as I wanted this one. The set was to be part of a special display at Walmart that also featured the Young Avengers box set along with a wave of Marvel Legends called “the Giant Man wave” that hardly anyone cared about (note sarcasm). When I finally saw the display at my local Walmart, this green box was the only thing that remained after being stripped-clean by other local collectors. But I didn’t care because I had my MARVEL MONSTERS set. This was my most-wanted part of that Walmart deluge, so I was stoked.

There wasn’t a whole lot to the set — just the four figures, a set of character-specific stands, and a poster book. Such a seemingly bare-bones offering was unusual for ToyBiz at the time, but I didn’t care. I had my set of Marvel Monsters. 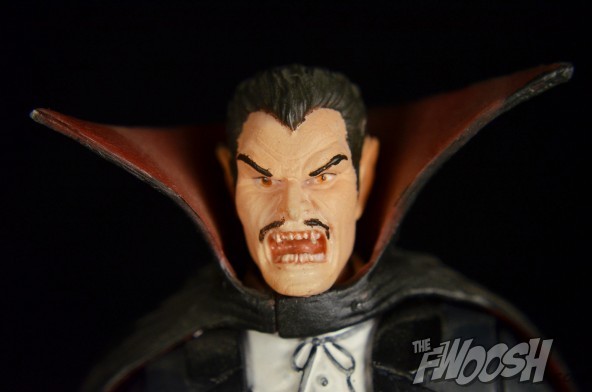 Dracula is based on Marvel’s own interpretation of the character, not Bela Lugosi, Christopher Lee, Frank Langella, or any other actor who brought fiction’s most famous vampire to the screen. Since the novel is in the public domain, Marvel had the freedom to use the name and character, but they put their own spin on the character and worked him into the larger Marvel universe. Most of the series was set in modern times (the ’70s), and it successfully integrated the classic character into a contemporary setting. It totally worked and didn’t feel silly or contrived at all. The Tomb of Dracula ended up being a hit for Marvel and it lasted into the ’80s, which is really something for a title that focused on what is essentially a villain. The series also introduced us to Blade, who, of course, would go on to grow beyond his humble origins in The Tomb of Dracula with a series of hugely popular movies, movies that basically kick-started the Marvel cinematic universe. 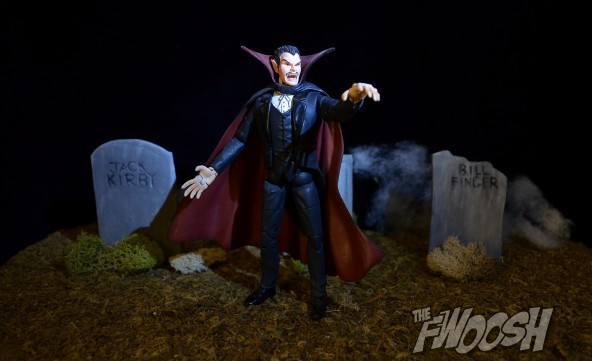 Dracula is built upon on the ToyBiz Professor X body with some new rubber attachments to make this particular suit a little more classic-looking and gentelmanly. A cape with a rather large collar was also added because, come on, Dracula needs a cape and this one is perfect. His head features an awesome sculpt that definitely nails the character. I’d prefer just a touch more white in his hair, but that takes nothing away from the sculpt or the paint job — both are totally solid. His hands almost function like claws with these big, long vampire fingers that succeed in looking creepy as heck. They feature a token point of articulation since ToyBiz had to articulate everything, but it isn’t really all that effective and probably would have been better left out. The only point of articulation the figure is missing is the ab crunch, which I do actually kind of miss in his case.

It’s hard to pick a favorite from this set, but it might be Dracula since everything comes together so well and makes for a fantastic interpretation of Marvel’s Dracula. 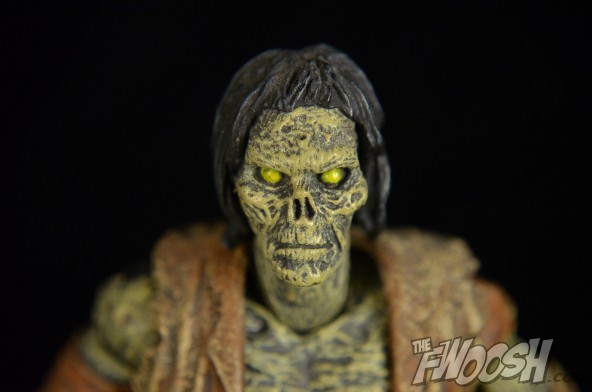 What’s interesting about this figure is that it’s an all-new sculpt that was only used this one time. The Zombie is probably the least well known of all the monsters Marvel introduced, but he was perhaps the most controversial of them all. Even though it was revamped in the ’70s, zombies were still a no-no as far as the Comics Code was concerned, but Marvel went ahead and ran with the idea anyway — just another reason why Marvel was so darn awesome in the ’70s. 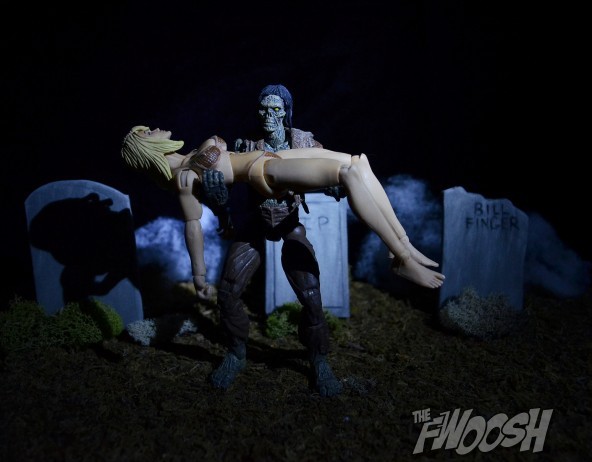 Zombies may be all the rage these days, but they were still on the obscure side of things back then, even though George Romero was trying his darndest to change that. This particular zombie was a guy named Simon Garth who was transformed into a member of the undead when he was made part of a voodoo ritual by his gardener. The series would then focus on people he knew trying to de-zombify him. It’s an interesting idea, especially now since zombies are usually nameless, faceless killing machines who don’t merit their own comic book titles.

It’s a very detailed sculpt that features most of the standard ToyBiz Marvel legends articulation, with the notable exception of an ab crunch. But, to tell you the truth, I never really noticed it was missing until photographing him for this article, so I guess it’s no big deal. His design looks very “1970s” to me. I think it’s the shirt/vest with no shirt under it. I can’t help but think of The Warriors every time I look at him. But since  zombie action figures are almost s common as superhero action figures nowadays, his design makes him unique among the zombie horde. 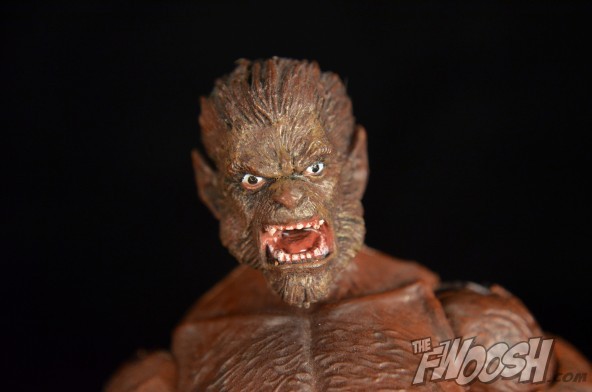 Like the Zombie, the Werewolf  features another all-new sculpt that was unique to this set. The figure is based on Jack Russel (yup) from Marvel’s Werewolf By Night, a man who would turn into a werewolf three nights a month due to a family curse that kicked in when he turned 18. He’d hunt and stalk criminals and evil-doers, mainly, but he would always end up hurting some innocent people in the process to, you know, maintain the whole “monster” aspect of his character. Otherwise, he’d just be a fuzzy superhero named “Jack Russel,” and that … wouldn’t work. 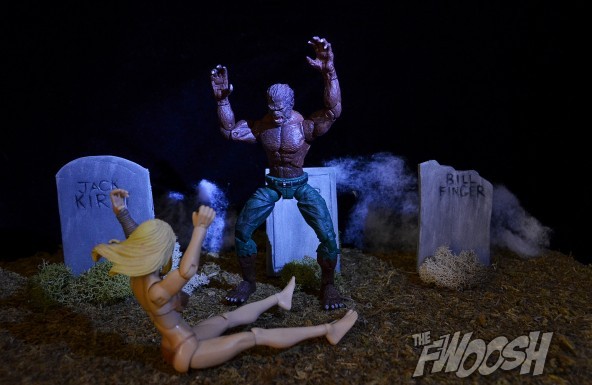 The sculpt is great and highly detailed with just enough paint to being out that detail. The only area where this guy falls short is his articulation. It’s pretty standard for a ToyBiz figure, but his head is stuck in a downward position, so he can’t even look up to howl at the moon. He can barely look straight-on, for that matter. All he can really do is gaze down toward whatever prey is hopefully on the ground. It’s an unfortunate glitch that spoils an otherwise great figure.

When The Tomb of Dracula proved to be a hit for Marvel, it didn’t take them long to introduce Mary Shelley’s creation to the Marvel family. And it’s Mary Shelley’s creation this figure is based on — not on Boris Karloff’s immortal take on the character for Universal. He’s an ugly, powerful-looking creature that was built on the Hulk Classics Absorbing Man figure, but since the Absorbing Man ended up being one of the hardest-to-find figures ever and many never, ever saw him, this Frankenstein figure may as well have been an entirely new sculpt as far as the average collector was concerned. It was to me, anyway. 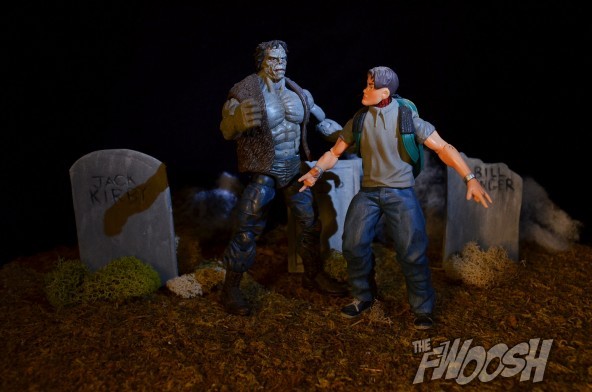 Unlike The Tomb of Dracula, Marvel’s Frankenstein Monster was not a hit and it didn’t even last 20 issues, which is a shame because if it had caught on, it would have done a lot to familiarize fans with a more classic take on the character. Karloff’s version is the greatest ever, naturally, but it was a design very specific to Universal Pictures, and that’s the only version of the character the world at large really knows, unfortunately. Anything else doesn’t stand a chance, as evidenced by Franky’s brief Marvel run.

Even if you have the elusive Absorbing Man figure, Frankensten’s paint job and new, character-specific details added to his sculpt make him feel like a unique figure. The vest really does look like fur, and his head sculpt is so detailed and grotesque that he’s totally convincing as “the Monster.” What’s also great is that it also succeeds in looking sad and pitiable, so even though you’re scared to death of him, you still kind of feel sorry for him — that’s perfect. 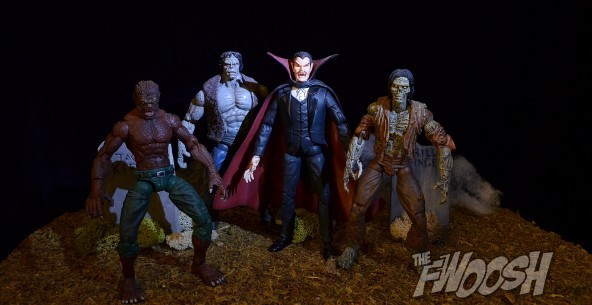 The set didn’t perform all that well at retail when it came out, which could be attributed to the sheer flood of product released at the time. There were reports of people getting it at a very deep discount at Walmart, and it seemed to sit around for a long time. I never saw it get marked down, but this is one set where there’s no way I could have waited for a clearance price to pick it up. I bought it before I bought anything from the Giant Man wave, and it remains one of my favorite ToyBiz offerings of them all.

If you have any level of nostalgic fondness for Marvel’s monsters from the ’70s, then this set is essential. Even if these versions of these classic characters are unfamiliar to you, then it’s still a set worth picking up because each one is a cool take on a well-established character or idea. It’s awesome all the way around.