“Where does he get those wonderful toys?” –The Joker 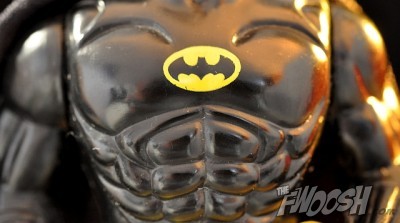 This is it. This is the toy line that transformed me from a nerd that was too old to be playing with toys into the sleek and sexy “adult collector” that I’ve become. These are the figures that brought about my first real toy hunt – the toys that I would remove from the package but never play with for fear of making the joints loose. These three figures—Batman, the Joker, and Bob the Joker’s Goon—would be my gateway drug to serious collecting. 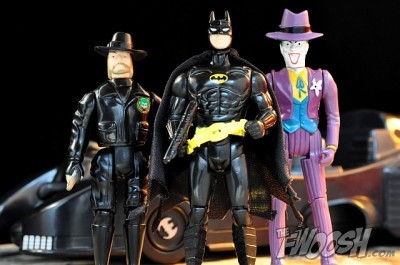 In 1989, Bat-mania was everywhere and I loved it. Did 13-year-old me really need that Batman beer-coozie and cyclist cap? Of course he did! What a stupid question. But as great as all the peripheral Bat-merch that came out at that time was, nothing excited me more than seeing those images of Toy Biz’s first wave of figures. Along with Batman, Joker, and Bob were two vehicles (the Batmobile and the Batwing) and one playset (the Batcave). The Batwing and Batcave have since gone to plastic heaven, but the remaining toys have been with me for nearly 25 years now. I do apologize for the dust on some of the photos, but macro photography and a quarter century of shelf wear don’t really mix well. Even after two baths and few hits of compressed air, I was still unable to get them completely clean. Where is Alfred when you need him? 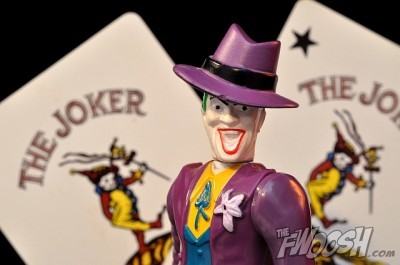 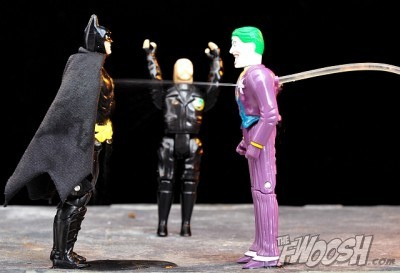 The figures themselves are very “Super Powers” and quite dated by today’s standards: cut joints, t-crotches, and pinned knees. The paints are basic and the sculpts are soft, but it really made no difference. The toy aisles weren’t flooded with superheroes like they are today, so these were like a breath of fresh air. Each figure has an action feature, but only Bob is hurt by it. He has a button that makes his leg kick, but the mechanism is so weak that the leg is almost always up. Batman’s utility belt is connected to a retracting wire that allows him to zip away at the hint of trouble, like a big girl. The joker is armed with a water bottle and hose that attach to his back. Squeeze the bottle and the lapel flower squirts. Action features are usually scoffed at by serious adult collectors, but, even today, I find both Batman and Joker to be a lot of fun. Bob was definitely the dud of the bunch at the time, but has now been elevated to ironic cult-hero status in my eyes. Someone somewhere thought it would be a good idea to make a balding, out-of-shape henchman figure, and I want to shake that someone’s hand. 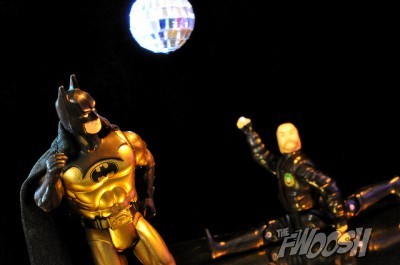 The accessories, while certainly not abundant, aren’t too shabby for the time. Batman has his grappling gun and Batarang. Bob has a hat, knife, and gun and the Joker is equipped with a hat, cane, and water bottle. It’s a miracle that I’ve managed to keep as many of the accessories that I have. 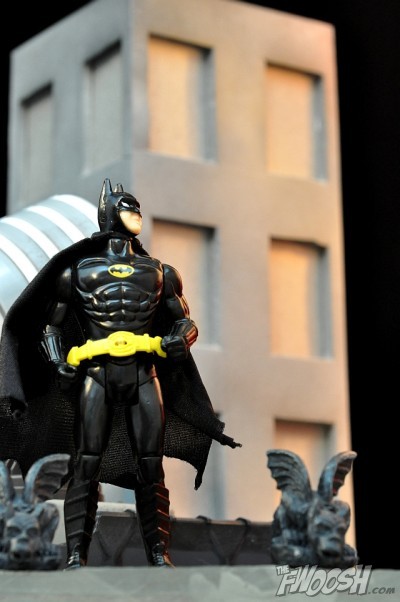 The Batmobile. Let’s not mince words here — this Batmobile is awesome. As my favorite design of all time, this toy is just as cool now as it was nearly 25 years ago. Shield accessory, a missile-firing parking brake, ample trunk space… what more could you ask for? Just don’t say a roof. 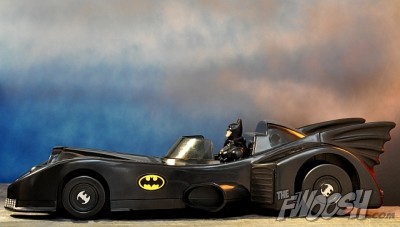 I’d like to think that I hold this line in such high regard because of the actual figures themselves. As good as they are, I can’t really give them full credit. Given my age at the time, a hit movie, and a new and matured interest in comic book heroes in general, a perfect storm was created, and Toy Biz’s Batman line became an instant love. I do love the toys very much and will always have shelf space devoted to them, but they represent so much more. They mark the beginning of a deeper appreciation of movies, comics, toys, and all things pop culture. They really did mark the moment I became an adult collector. 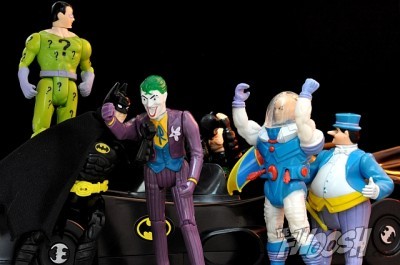