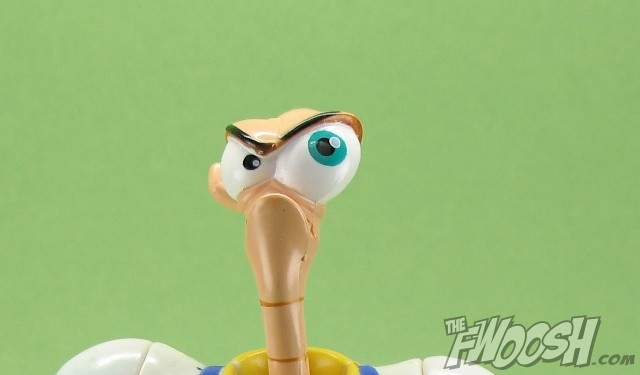 I’m not much of a video game guy, unfortunately. At least not nowadays. Not really out of dislike of playing video games, but I don’t seem to have the time to dedicate to avid playing as much as I once did. My total amount of systems have been Atari 7800, Sega Genesis, Gameboy Advance, and Nintendo 64.  I’ve played a few PC games here or there, but overall I haven’t jumped into the brand new next generation stuff. Maybe some day.

Because of this, I tend to not care much about video game toys as a rule. For instance, I played Halo but didn’t care about owning Halo toys.  But there are a few video game properties that have something so unique, so special, and so toyetic about them that I’d be first in line for a comprehensive toy line for them. Earthworm Jim is one of those properties. 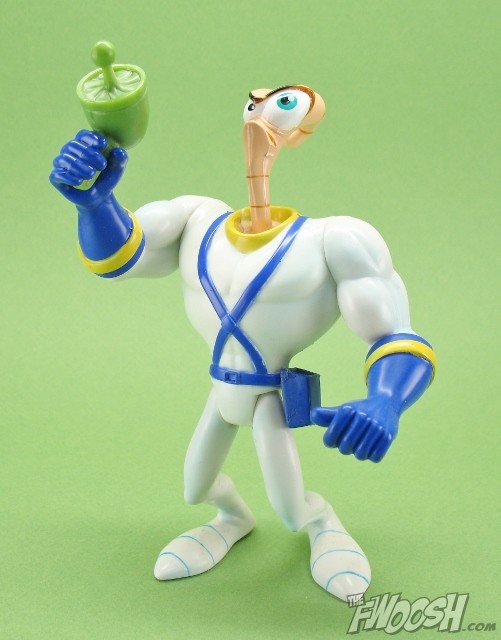 Man, I loved that game. I remember renting it from Blockbuster to give it a test shot on my Sega Genesis, falling in love, and buying it as soon as my rental period was over. Such a wacked-out premise, unique characters, oddball storyline — the whole thing tweaked my nerve endings just right. As such, I still have a soft spot for Jim, though it’s been years since I played the game. 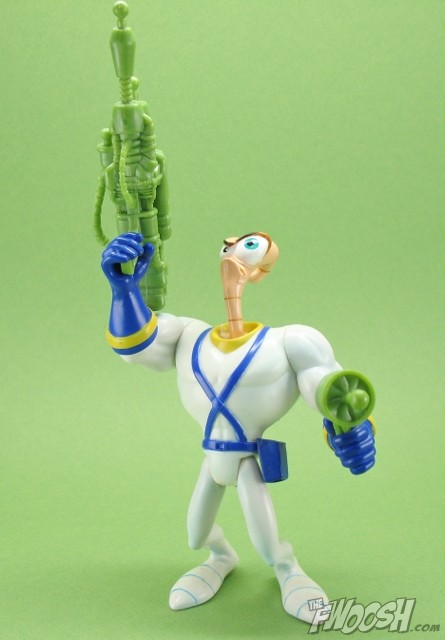 When I was wandering down a toy aisle in 1995 and saw an Earthworm Jim line, I immediately knew I’d have to buy Jim. There were others, but he was the only one in the line I bought because I didn’t really need a new line to collect at the time. In hindsight I wish I had bought everything that was out, but  at least I got the main dude. 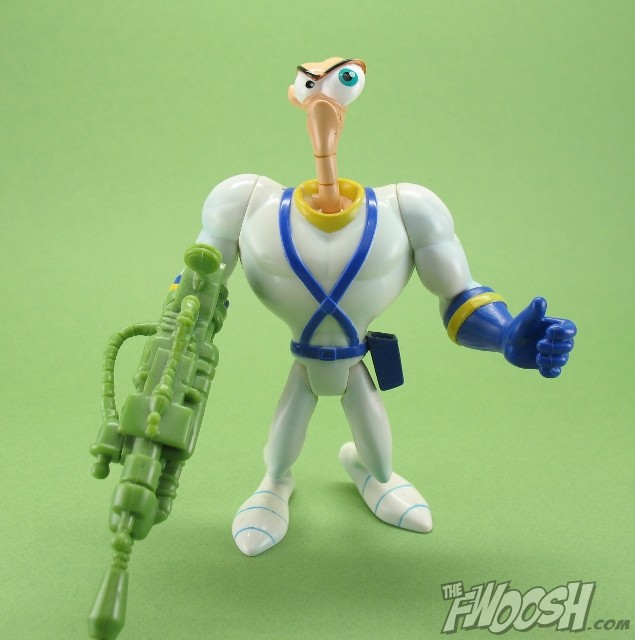 See, what was weird, and what I didn’t know at the time, was that this wasn’t strictly a video game line. Jim had a cartoon. It was on no station I knew of at the time, and I don’t remember seeing commercials for it when it was supposed to be on. It came and went without me ever hearing about it. It wasn’t until a month ago that I finally bought the complete series after hearing some good word of mouth about it and gave it a run through. Let me tell you, friends and neighbors, if you enjoy cartoons, you will enjoy this. It’s as funny, unique, and entertaining as the game. It reminded me a lot of the Tick cartoon in its off-the-wall humor, so if you’re a fan of that, give it a shot if it sounds like you’d be into it. 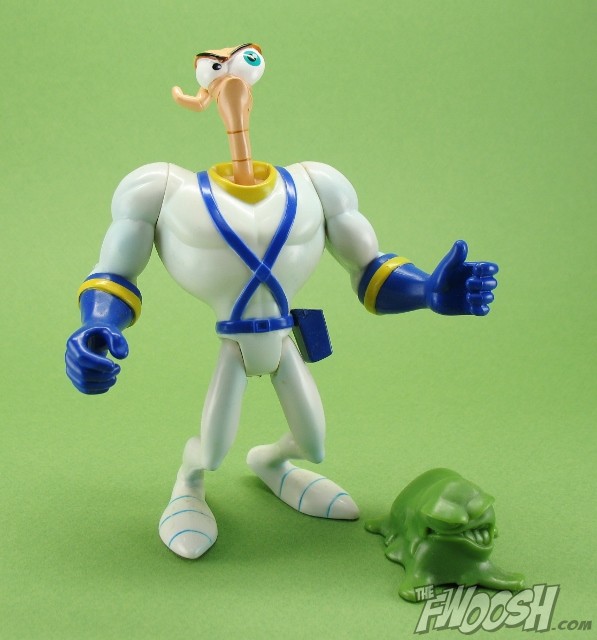 But anyway, back to the toy. Running across an Earthworm Jim toy line back then took me by complete surprise, and he was an instant purchase. Recently, Mezco came out with their own version, but with very limited articulation and no articulation at all below the waist, so while he may have a better sculpt, he’s still not that much better than this Jim in the articulation department. That’s a shame because I’d be all over an updated super-articulated line. Oh well.

Jim has a full six points of articulation. I know! So much motion. That’s almost seven! Blows your mind, doesn’t it?  But yeah, shoulders, glove-cuts, and hip joints are all Jim has. His worm-launching action feature means Jim can’t turn his head; push a button on his back and his head shoots out. It’s got a nice amount of spring to it, so while you won’t exactly be putting an eye out with it, it’ll probably, at the very least, make your eye water a bit, which could be distracting if you’re driving. I’ll leave it up to your psychiatrist to ask why you’re trying to launch a worm while driving. Is that a euphemism? Could be. 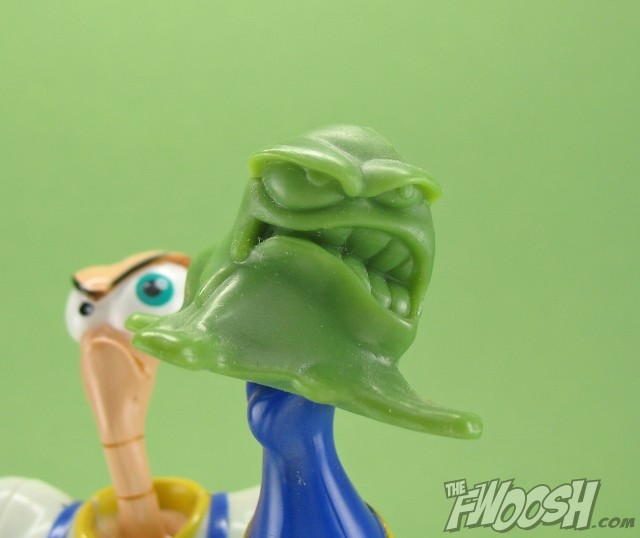 For accessories, Jim came with two guns and his sidekick/pet snot, who is essentially a small, green, mucous-like little blob, so his name is quite fitting. Jim apparently came packaged with his accessories in two different colors: green and red. Now, if you got the green accessories, that meant Snot would be the right color, but his weapons would not be. But if you got the red accessories, that meant his gun would be the right color, but Snot would be red also. You couldn’t win. And I won’t lie that this little detail bugged the worm poop out of me for quite a while. Because of this, I’ve been doomed to have a green plasma blaster and big crow croakin’ gun while taking solace in the fact that I don’t have red Snot. Because that’s just unhealthy.

Earthworm Jim lives in that rarefied realm of video games that passed beyond disposable entertainment for me and went on to be legitimate icons. It’s the same land that Sonic, Pac-Man, and Mario live. Maybe Revoltech will make a super-articulated version of him at some point. I’d be all over it like dirt on a worm.

You can actually buy it on Amazon