The Walking Dead Board Games are Available for Purchase at Comic Book Specialty Stores.

(Baltimore, MD) –(October 21, 2013)- Exclusively from Skybound, Kirkman’s imprint at Image Comics, and Diamond Comic Distributor — MONOPOLY: The Walking Dead Survival Edition game is now available to purchase in comic book specialty shops.  Based off The Walking Dead comic from Robert Kirkman, the game put a post-apocalyptic spin on the traditional Monopoly, giving fans the opportunity to live out the comic by fighting for their own property, and avoiding zombies with each players turn.

Despite its post-apocalyptic setting, MONOPOLY: The Walking Dead Survival Edition delivers a classic Monopoly wheeling and dealing game play.  Players fight for, and then must fortify the prime real estate and resources that will sustain their lives.  The game takes over the characteristic of The Walking Dead as the properties all correspond with the series landmarks such as the prison cells, Greene Family farm house, Woodbury, and more locations while game tokens resemble key items from the series such as Rick’s sheriff hat, bucket of body parts, the telephone, and the R.V.  Instead of using money to purchase property, players must trade in essential supplies such as food, ammo and fuel to gain more territory on the board or to place a guard tower or wall instead of the standard houses and hotels, to secure their properties from invading zombies.  There’s only one victor that will outlast the others – whether living or undead – when all is said and done. This completely customized game features six collectible tokens, optional speed play and a fight to the finish! 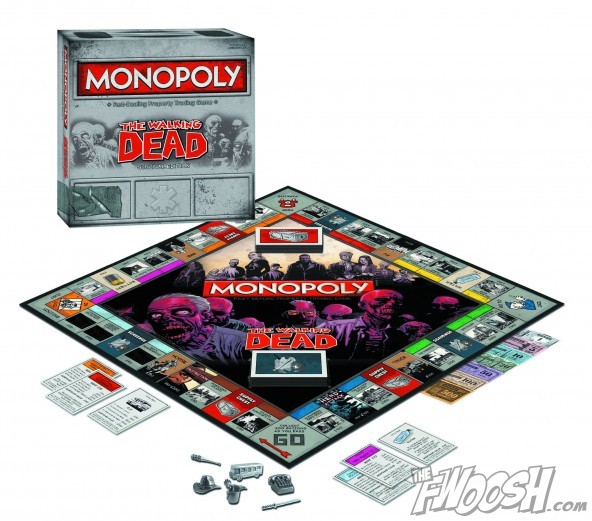 Get Monopoly: The Walking Dead Survival Edition at your local comic shop today. Additional The Walking Dead merchandise including comics, apparel, toys and, collectibles can also be purchased at comic book stores or through Diamond’s PREVIEWS catalog. Find a local comic shop at www.comicshoplocator.com to get the games, and have fun defending your territories from the undead.

ABOUT SKYBOUND- Skybound is the home of Robert Kirkman’s creator-owned work including his Eisner Award-winning comic book series, The Walking Dead, long-running Invincible, all-ages Super Dinosaur, Thief of Thieves and Clone as well as Witch Doctor and Invincible Universe. Since its inception, Skybound has created television shows, merchandise and a wide spectrum of platforms, games (The Walking Dead: Assault iOS app), and entertainment events (The Walking Dead Escape). Skybound’s successes include the comic behind the hit Emmy®-winning television show, AMC’s The Walking Dead, the highest-rated basic cable drama of all time in the U.S, also an international success in 122 countries and 37 languages. Skybound/Kirkman frequently top the hardcover and paperback bestseller lists. Your destinations for all news and merchandise from Robert Kirkman, The Walking Dead and all Skybound titles are www.Skybound.com and www.TheWalkingDead.com

ABOUT USAOPOLY: USAopoly, Inc., (http://USAopoly.com) is a leading game manufacturer in the specialty market offering the world’s best-known games (under license from the Entertainment & Licensing Division of Hasbro) and an innovating game developer of hot new games like the #1 Party Game, Telestrations, (http://Telestrations.com). Sharing the laughter, spreading the fun. One party at a time!

ABOUT DIAMOND COMIC DISTRIBUTORS (DCD)—Diamond is at the nexus of comics and pop culture. Based in Baltimore, MD, DCD is the world’s largest distributor of English-language comic books, graphic novels, and related pop-culture merchandise, serving thousands of retailers worldwide. For more information, visit Diamond on the web at www.diamondcomics.com.