Star wars is a toy property that has given an incredible amount of attention to the characters that most wouldn’t notice or care about. It seems as if every figure ever to have the shadow of his arm appearing in the trilogy has received an action figure to immortalize him, even that dude with the ice cream maker.  With Star Wars making the leap to 6-inch figures, I’m not sure if I need every character that made a half-second appearance in the movies (not that I wouldn’t buy them), but there are a couple that I must have. Taking a look at the recent Fwoosh Top Ten, I noticed a few characters that either received no votes at all, or received so few votes that they may as well have been left out in the cold. This must not stand!

Therefore, I bring your attention to five characters that must not be left out of the Black Series. Some of these have a decent shot, others may not, but they’re all necessary to me. You may feel differently, in which case I know I’ll hear about it in the comments.

Otherwise known as “the fat guy that cries like a bitch,” the Rancor Keeper is one of those extraneous characters that serves no purpose at all in the trilogy. But Star Wars — and toys in general — are more than what’s on the screen to me. When I was a kid, this was a bad-ass dude. I mean, he keeps a Rancor for a pet. If a guy that keeps a Doberman for a pet might be considered a BMF’er, then what about a dude whose job is to care for a gigantonormous people-eating dungeon-monster? You gotta figure him to be the toughest SOB that ever shuffled his way through Jabba’s court. If he cries, it’s only because the Rancor is the only creature on Tatooine that can stand his unwashed, surly, antagonistic, kill-you-if-you-look-at-him company. I’m sure there’s a whole back story worked out for him somewhere, but to me and in my playtime as a kid, he was the one you didn’t mess with. 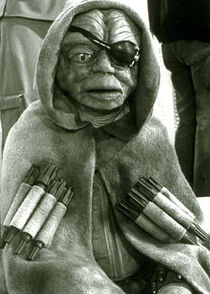 Looks like a bad guy, but is really a good guy because he was with the Rebels right before they flung themselves at a gigantic honkin’ deathball for the second time. He’s a weird-looking dude with an eyepatch. What is it about eyepatches that immediately make somebody twice as interesting? I don’t know, but he’s one of those background characters that you know has done some things he doesn’t like to talk about in polite company. It’s like “three-eyes” except without the “th” and spelled wrong. Because he has three eyes. Ree-Yees fascinates me. I think he’d make an awesome-looking figure, and I don’t know why. Some of them I don’t want to examine too hard because there’s something primal about it. I have a pretty good idea why the others on this list fascinate me (more or less), but all I have with Ree-Yees is a sketchy idea of awesomeness floating in the back of my head. He was on Jabba’s barge, and you know those guys are the scummiest of the scummy, so he’s probably got a decent body-count on him, but there’s something about the three eyes wobbling out there. It’s like the anti-eyepatch. You’ve only got one, well screw you, I’ve got three. If he had three eyes and two eyepatches, he may have been the greatest thing since someone carved a wheel from rock, but it wasn’t to be. But still, you have to wonder what’s going on in that misformed noggin. 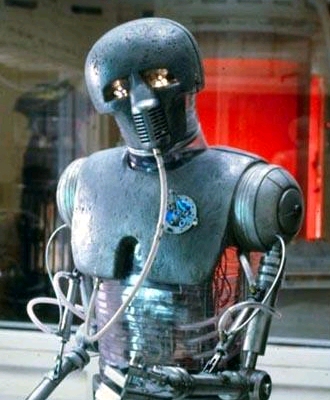 It’s probably not a story unique to me, but I ran across Star Wars toys before I was aware that they were based on a movie property or any property at all other than those pictures on the cardbacks, so the world of Star Wars, at least initially, was once wide-open to me. As such, the most interesting components were the robots, because robots are the greatest thing ever when you’re young. Because of that, I have a huge soft spot for the droids of the line even if they later didn’t end up being the bad-ass murder machines they were to single-digit me. Of them all (at least until I ran across IG-88), 2-1B was the pinnacle of awesomeness. I mean, it’s not hard to see why. Even though he’s a medical droid, there’s such a look of complete, cold robotic malevolence in every single facet of his appearance, from his clamp-like hands to his beady eyes to his strange respirator apparatus. Is there anybody who would want to wake up on an operating table and see this absolute nightmare hovering over us? I thought not. See the rules of this little game. Even his name intrigued me when I ran across him as a kid. He wasn’t a robot, but a Lobot. What the hell was a Lobot? Was it some awesome hybrid of man and robot? Was he better than robots? Were there more than one Lobots? The mind bagoggled at it all. And the best part was where the other droids ended up being glorified helper monkeys instead of tyrannical assassination-bots, Lobot was a legitimate bad rammajamma when I finally saw him in the movie. Tell me when he suddenly blinks awake after Lando punches some code into his wrist doojamahickey isn’t frickin’ creepy as hell. He’s staring right into my soul is what he’s doing. That’s a look of sheer determination and the unrelenting promise of pain to those who stand in his way. Lando was no dummy. Why soil his hands when he can have Lobot do all the heavy lifting. Press some buttons: bammo — instant imperial bitches, courtesy of Lobot and his crack team of Bespin security dudes.  What did he do off screen? Did he do something cool? Yeah, I bet he did something cool. Probably cracked the neck of the first Stormtrooper that laughed at his puffy sleeves.

There was an issue of the old Marvel Comics Star Wars series that I recently read where Lando returns to Bespin and is attacked by a crazed Lobot. And wouldn’t you know it, even though he did very little on screen, in that comic, he was every inch the bad-ass I knew he’d be, tossing Lando around like he was a rag doll. I bet in the movie he shouted his name after every Stormtrooper he killed. Pow! Lobot!