“There’s nothing funny about a clown in the moonlight.” — Lon Chaney 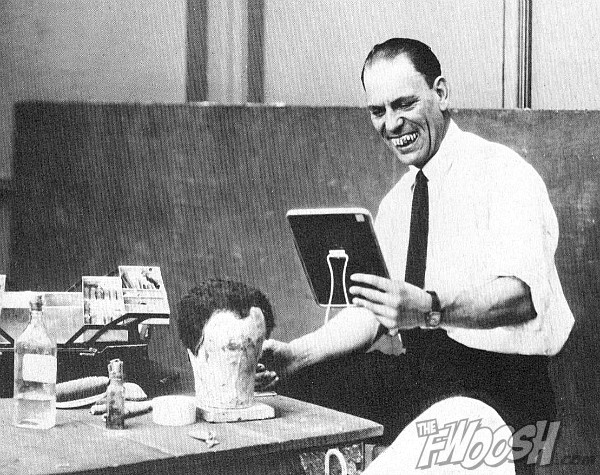 What’s left to say about Lon Chaney? As one of Hollywood’s first true legends, the tapestry of his life has been worn threadbare thanks to nearly a century of examination, analysis, and tribute. What light could I possibly shed on a legend whose shadow is brighter than the biggest stars of today? With his life story immortalized on film (1955’s James Cagney classic The Man of a Thousand Faces), his name on the Hollywood Walk of Fame, and his work preserved by the Library of Congress, Chaney seems well represented. And yet I have to write about not one, but two of his most enduring creations. Well, action figures of ’em, anyway. 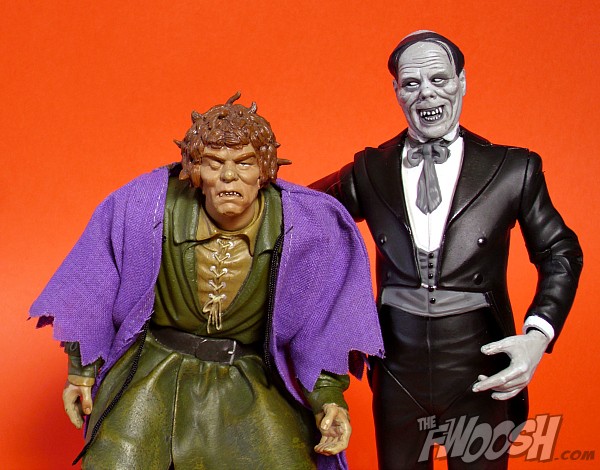 Sideshow produced three figures based on Lon Chaney in their 8-inch Universal Monsters line. Wave two gave us Erik from 1925’s The Phantom of the Opera, wave three featured Quasimodo from 1923’s The Hunchback of Notre Dame, while the elusive wave five brought Phantom’s Erik back as The Masque of the Red Death. Today we’re looking at the first two, as no review could contain the cumulative horror of all three figures at once. 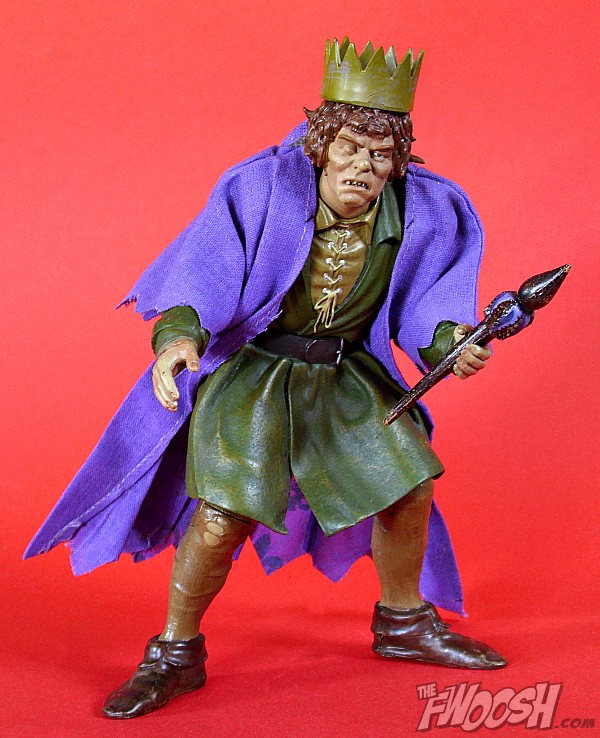 Our first figure was inspired by the work of 19th century French writer Victor Hugo. Today he is best known for penning Les Misérables, but it was Hugo’s novel Notre-Dame de Paris that caught the notice of Universal Studios. Determined to capitalize on the popular work, Universal recruited their star Lon Chaney for the role of deformed bell-ringer and emotional core of the story, Quasimodo. 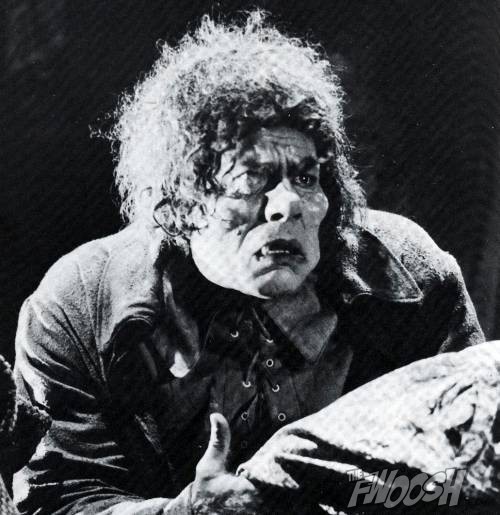 Quasi stands 8 inches tall and sports 12 points of articulation. The figure came packaged with a character-specific base with nameplate, robe, crown, and scepter. An ambitious basement cleaning resulted in the loss of many of my Sideshow Monster bases and accessories, so here’s a promo pic showing all the figure came with. Sculpted by Sideshow’s go-to monster guy Oluf W. Hartvigson, Quasimodo has never looked better. Chaney went “all in” for his role, wearing primitive contact lenses, painful metal leg-braces, and a 15-pound plaster hump to fully transform into the film’s misunderstood title character. All of these features are represented in startling detail; looking at this figure, you can practically feel the pain Chaney embraced to bring his performance to life. Speaking of pain, the back prosthesis Chaney wore allegedly caused him to injure his back and suffer discomfort for the rest of his life. Whether this is true or just balloon-juice on the part of Universal is hard to say, but I gotta admit, it does look uncomfortable. Not as uncomfortable as the Chaney-designed makeup, mind you … 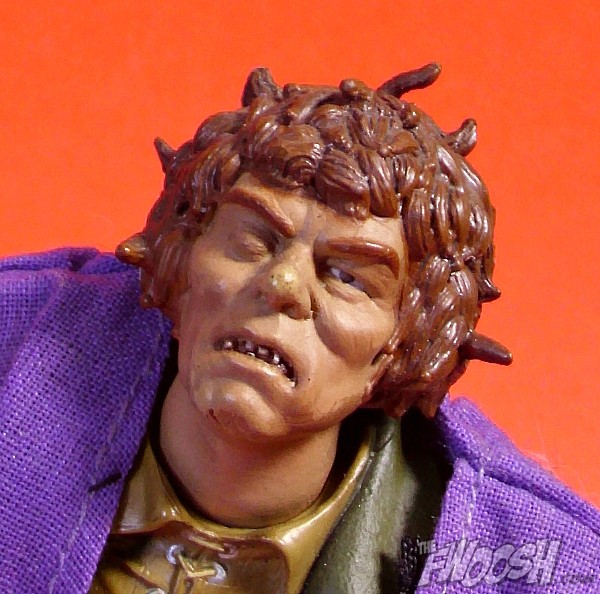 He-Man’s deformed brother or Roseanne Barr? Cast your votes below in the comments section.

Hartvigson delivers a great representation that’s full of life and personality. That said, an unusually-heavy paint app smothers some of the sculpt’s subtle touches — I know there’s more here, but it vanishes under the clumpy flesh-tone. You can really see the difference when you compare it to the product picture above. The heavy paint creates a sense of softness that isn’t the norm with this line — check out the figure’s shirt: 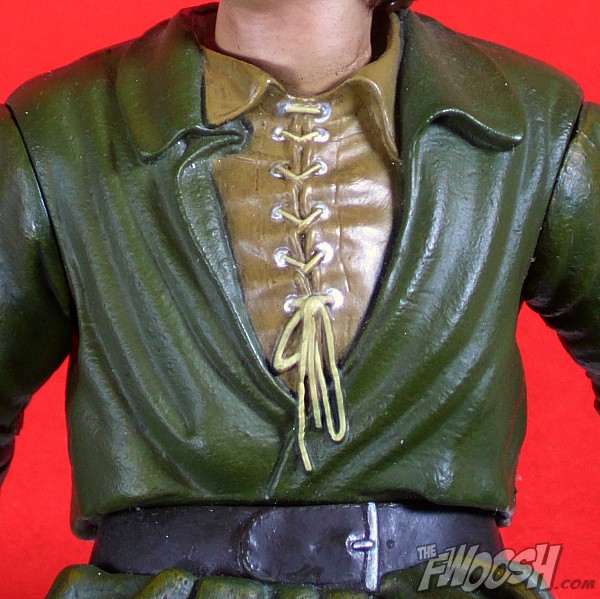 That’s some clean work there, making the problems with the face all the more noticeable. It gets better from a distance, but most things do, amiright? Not a deal-breaker, but worth noting. 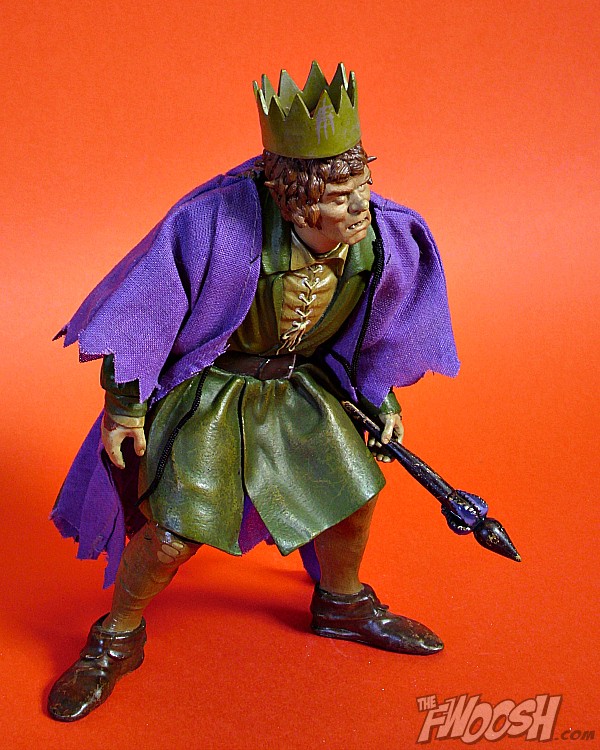 Once we get past the face, the rest of the paint is good. The green tunic has especially-nice coloration, with some deft dry-brush applications. All of the “leather” pieces have a sheen, which adds some extra pizzazz. While I have no proof to substantiate this, it appears Sideshow anticipated Quasimodo being the “dud” of the wave, and they did what they could to make the figure as appealing as possible. More on that in a minute. … oh, why wait? Quasimodo has the 12 points of articulation standard in most Sideshow figures, with one major difference: his neck is ball-jointed. Hallelujah, saints be praised, b’gosh and begorrah! While it can only move as far as the sculpt allows, it’s still a huge step. Up until this figure (and again forever after, sadly), the Sideshow offerings had your basic peg-neck assembly and could only turn left and right. Figures like wave one’s Wolf Man could have really benefited from this extra step. Poor guy can’t howl at the moon unless there’s a picture of it in the newspaper … Quasimodo didn’t come to us empty-handed, receiving three character-specific accessories: a crown, a scepter, and a removable “king’s robe.” Everything looks good here — the robe has a nice fit, some tasty paint-work on the back, but, most importantly, it is easily removable; as much as I appreciate the extra piece, Quasimodo only wore it in one scene and the overall sculpt fares better without it. The crown and scepter are nice pieces and feature a few choice paint applications. The crown sat much lower in the film, but I can live with it. In 1925, Universal went back to France for inspiration, this time returning with Gaston Leroux’s Le Fantôme de l’Opéra. This early 20th century novel told the tale of Erik, a hideously-deformed pianist living a secret existence in the sewers beneath the Paris Opera House. Driven by an unrequited love for the beautiful understudy Christine, Erik embarks on a spree of murder and mayhem the likes of which Paris has never seen. Who could possibly play such a fiend? Who, indeed? Chaney’s makeup for Erik is markedly different than that of Quasimodo. While the Hunchback is ugly, there’s still an element of human frailty in his swollen, misshapen face. The Phantom’s skull-like visage is harsh contrast to this. Instead of playing on the audience’s compassion, Chaney instead goes for the more primal gut reaction of revulsion. With his piercing black eyes, flared nostrils, and thin lips drawn taut over the malformed upper plate, Erik appears either dead or diseased, neither of which is acceptable in polite society. Chaney designed a being that creates and, in turn, thrives on fear. Where Quasimodo is forced into the role of monster, Erik actively embraces it. The sculpt delivers the goods and this time paint isn’t an issue. Every wrinkle and crease is clean and well-defined, catching both shadow and a subtle but effective paint wash. Details like bags under the eyes and his few remaining strands of greasy hair really sell the likeness. Erik was sculpted with his mouth open, so we can see what dental care was like back then. Such a lovely smile, don’t you think?

The rest of the suit looks good — perhaps a little too good. I can’t help but feel even the best-kept sewer-tuxedo would have a bit more wear, but it’s screen-accurate, so what are ya gonna do? I managed to get over it with the help of this über-creepy second head. When he has business outside of the sewers, Erik employs a disguise to help him get around. Okay, it’s not the most realistic of masks, but when all you have to work with is what Parisians flush down their toilets, you do your best. Because this figure is the monochromatic Silver Screen edition, the painter was free to give Erik the pasty grey flesh he has in the original film. The Phantom is a figure that doesn’t work for me in color — he’s a creature from another time and place and, as such, doesn’t have to look “realistic.” Considering 90 percent of the costume is black in color, white and grey is all it really needs. Erik has the standard Sideshow 12 points of articulation: a pegged neck and swivel joints everywhere else. He’s saddled with the dreaded “V” crotch, which severely limits the movement of his legs. No, he’s not the type to do a Rockette-style dance number, but I’d at least like to simulate the figure stepping forward. Still better than those dead-below-the-waist Mezco figures, though.

Much like the Invisible Man, Erik has a “gesture” arm. It’s sculpted in a classic beckoning pose, which means that’s all he’s going to be doing. Find a nice figure for him to beckon, I guess. While Lon Chaney has appeared in over 150 films, it is these two roles that have solidified his position as the first pillar of cinematic horror. Sideshow did a wonderful job immortalizing them, and like the characters they are based on, these figures are bound to become classics, haunting collector’s shelves for decades to come.