Our pals The Four Horsemen have sent along information about their presence and Power Lords exclusives at NYCC 2013. Check it out!

via The Four Horsemen: 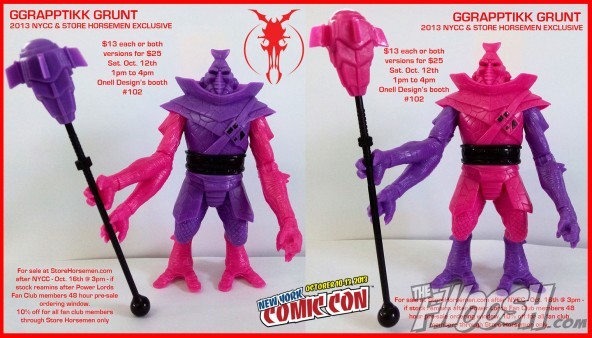 The first variant figures to be released of the Power Lord’s fan favorite character, Ggripptogg, these two Ggrapptikk Grunts feature multiple points of articulation as well as modular playability via the amazing Onell Design’s Glyos “pop & play” system! Each comes with his massiveMega-Mace also featuring Glyos compatible modularity. If you remember the Power Lords: Power Solder & Elite Solder that were shared exclusives for the 2013 Power Con and Store Horsemen from a few weeks back, then you know that you need to get to the Onell Design booth early or you’ll miss out!