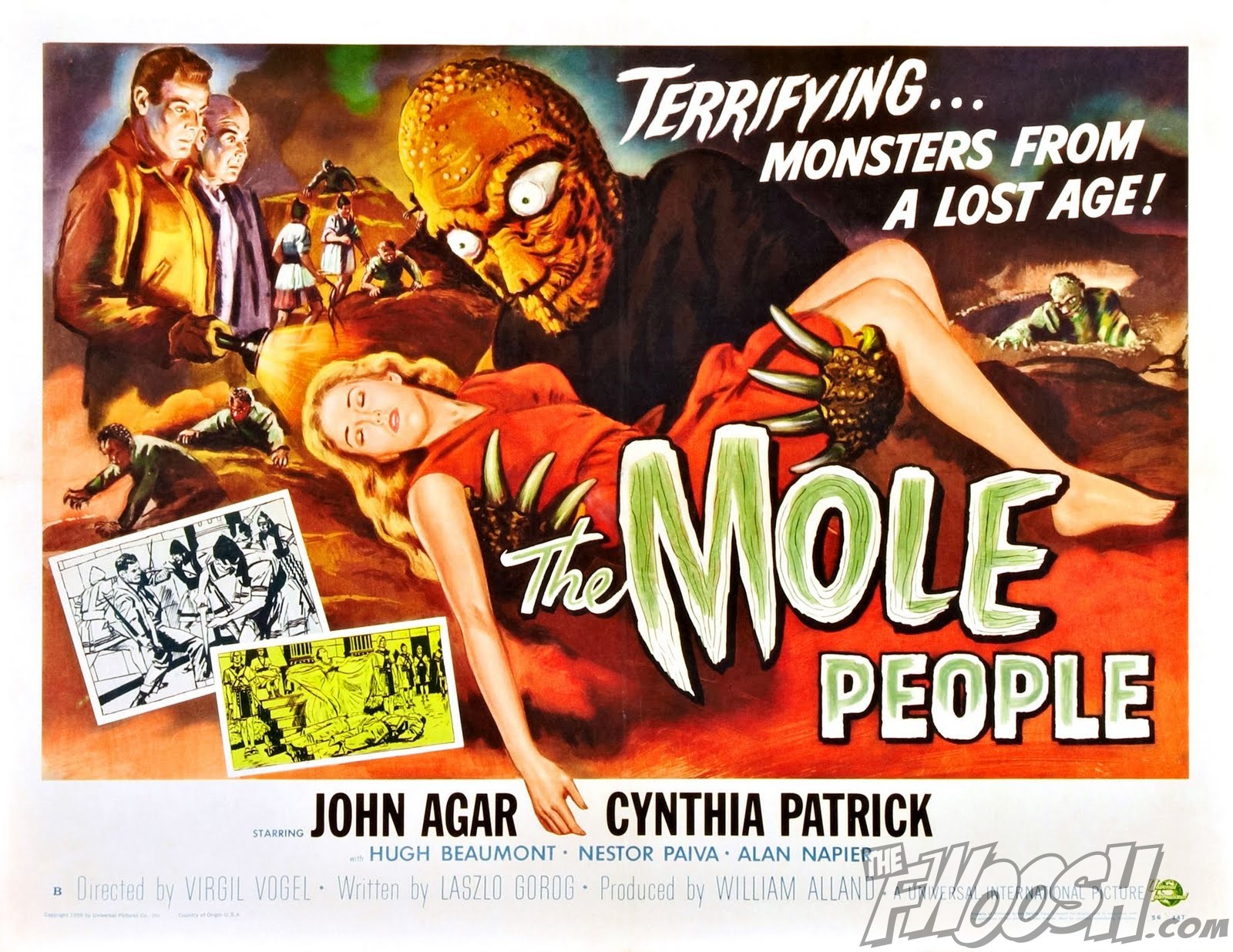 I have a confession to make: I’ve never watched The Mole People. At least, I’ve never watched it without three wise-cracking silhouettes at the bottom of the TV screen. If you’re familiar with Mystery Science Theater 3000, then you may have seen experiment #803, in which Mike and the ‘bots are forced to suffer through this cinematic turkey. Unlike the SOL crew’s previously riffed Universal classic This Island Earth, The Mole People is dull, colorless, and uninspiring. That said, the Mole People themselves were infamous enough to warrant inclusion in wave four of Sideshow’s Universal Monsters series. 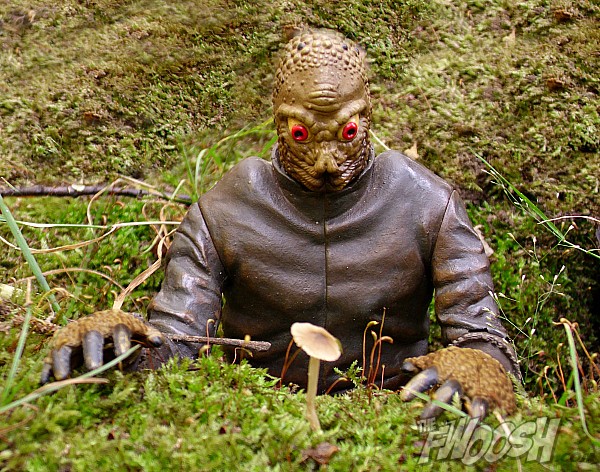 Having provided designs for previous Universal monsters Metaluna Mutant and the Creature from the Black Lagoon, costume designer and animator Millicent Patrick was tasked with creating the Mole People. The title character’s appearance was modeled in part after the star-nosed mole, most notably the fleshy set of appendages which ring its snout. These appendages, or “rays,” contain approximately 25,000 minute sensory receptors that allow the functionally blind moles to find and identity food, as well as detect seismic wave vibrations. It’s real-world touches like this that gave Patrick’s creations a life and vitality that endures to this day. 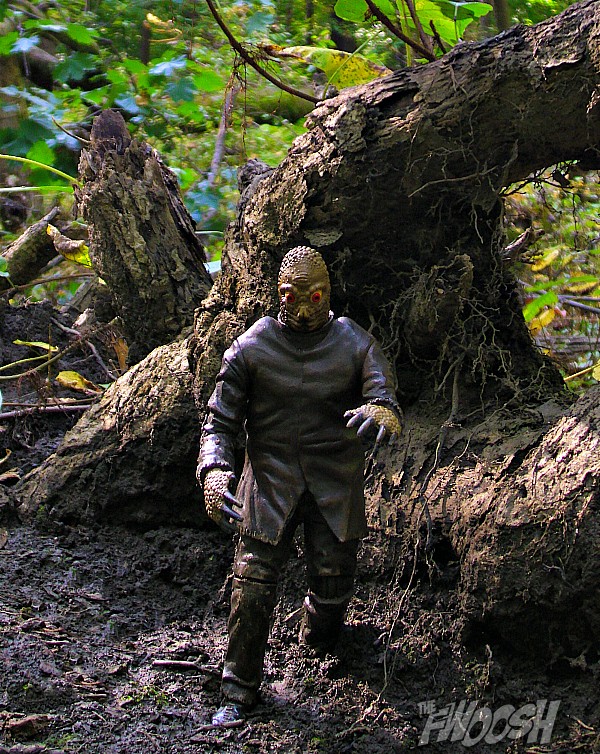 Instead of attempting to replicate a mole’s distinctive velvety pelt, the Mole People were dressed in coarse, “peasant-style” garments. He also lacks any sort of tail. While these cost-saving measures made sense from a business standpoint, they resulted in a product that pales before earlier, more lavishly produced Universal efforts like This Island Earth. 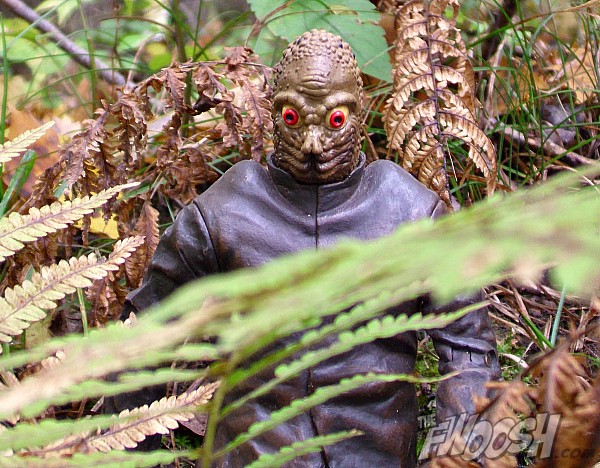 As far as detail goes, the Mole Person is one of the less-impressive Sideshow figures. This has more to do with the monster’s design than any shortcomings on the part of sculptor Oluf W. Hartvigson. At the end of the day, the Mole People were studio extras wearing brown Nehru jackets and monster masks — there’s only so much there to work with. It’s up to the head and hands to do the heavy lifting here, and they acquit themselves nicely. 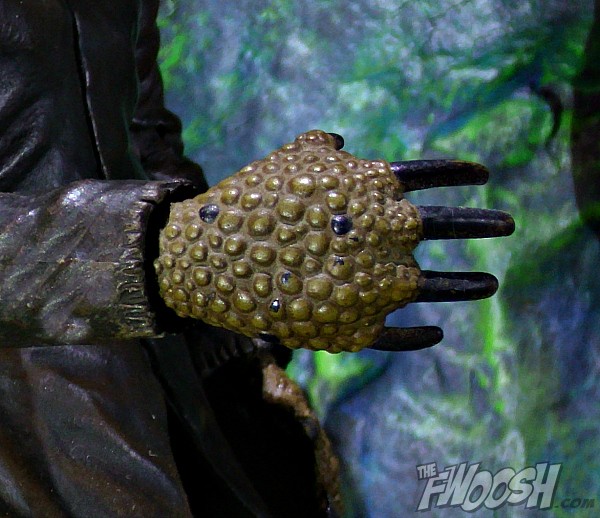 Further deviating from its real-world origins, the monster has a humanoid hand lacking the extra thumb (the prepollex) moles are known for, making it that much harder to burrow. Hey, it’s their primary form of travel, so every little bit helps! 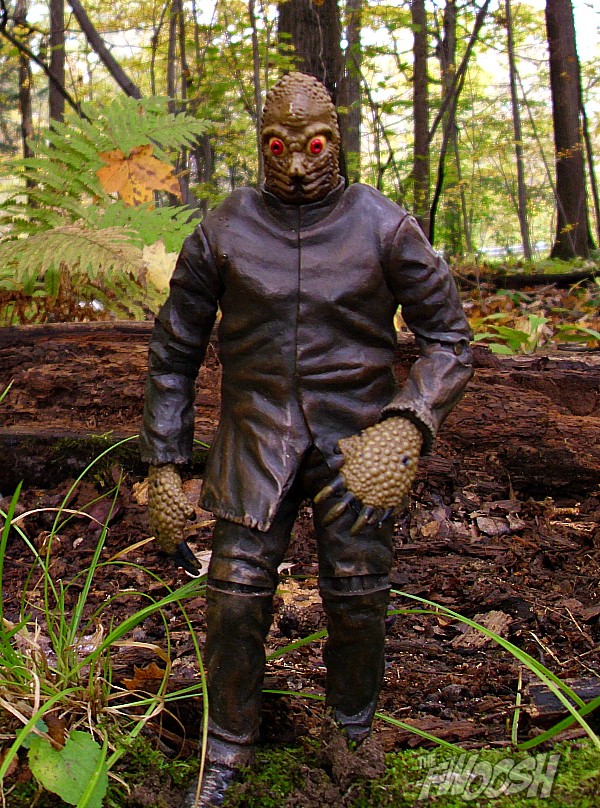 Despite its plain appearance, the outfit has some nice little flourishes. The tattered fabric on the cuffs is especially nice — it’s subtle, but its presence helps sell the idea of this guy being a worker. I get the sense the race of Sumerian albinos who enslaved the Mole People would sooner throw the whole Mole Person away than replace a ripped outfit — Sumerian albinos are dicks like that. 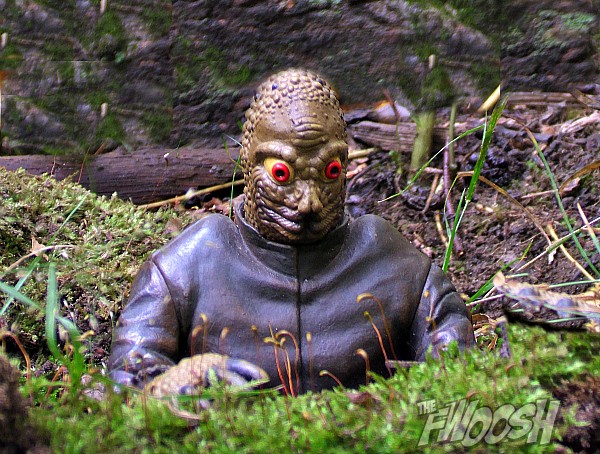 When it comes to the figure’s paintwork, there’s not a whole lot to say. The Mole Person is mostly brown, so everything but the head and hands are cast in that color. There’s a bit of dry-brushing and some overspray to create depth, but the lack of anything but earth tones makes it a muddy experience. The hues used for the skin look natural enough, especially with the addition of a dark wash. Both the hands and the head look more convincing for it, and it sets off the red and yellow of the eyes nicely. 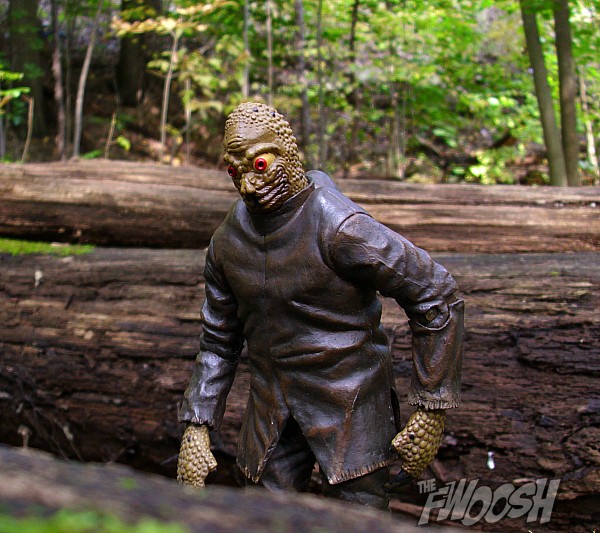 The Mole Person is 8 inches tall and features 11 points of articulation, but not all of it works. You’ll note the edges of the jacket fall over the figure’s hips, which effectively immobilizes any movement there. This, in turn, limits the knee’s already restricted range, making the figure practically a statue from the arms down. 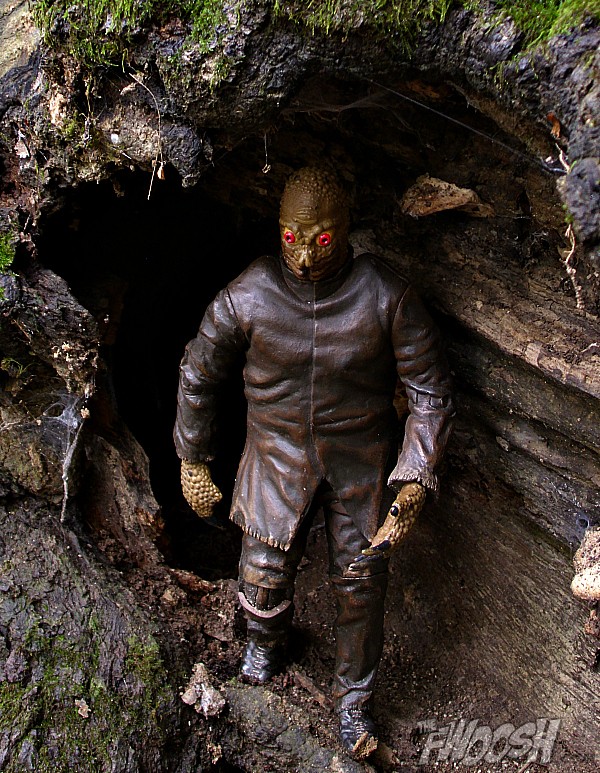 The arms are pinned at the shoulder, with single-jointed elbows and swivel wrists. This allows for some appropriately “mole-like” poses, like digging its way out of the ground or menacing your custom John Agar figure (c’mon, you know you have one). 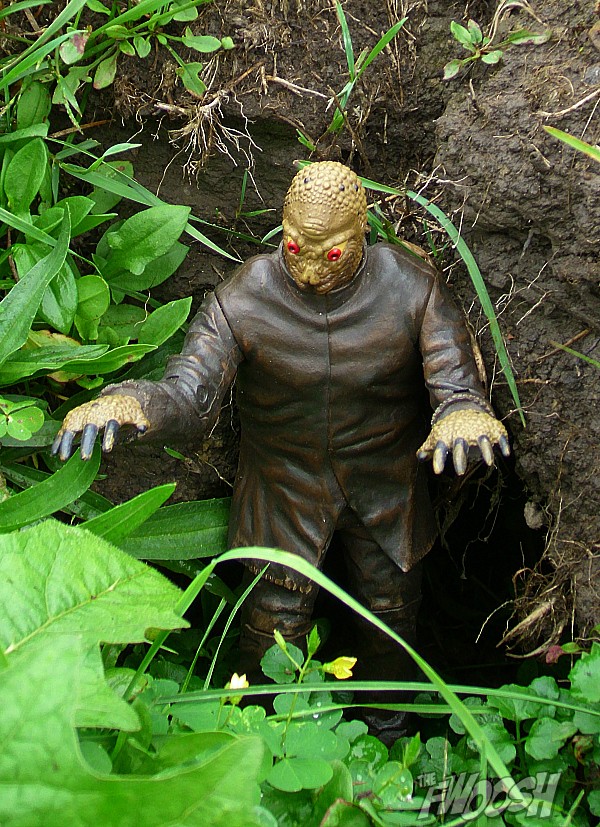 From an accessories standpoint, the Mole Man came with five mushrooms, a sack to carry ’em in, and a display base with nameplate. Since an accident claimed my figure’s base, here’s an old promo pic to show ya what everything looked like: 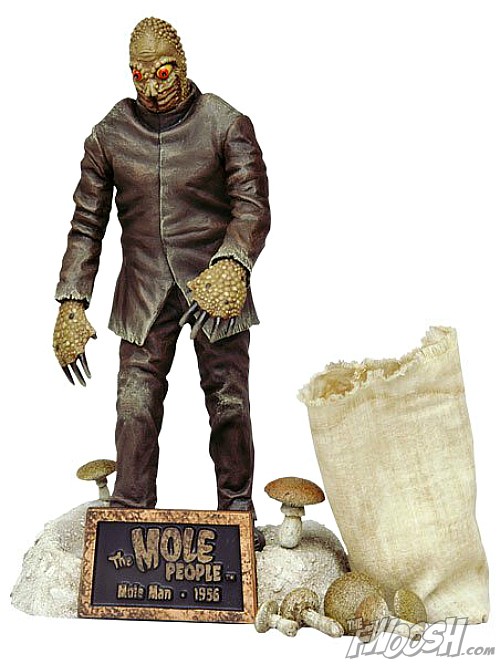 Ultimately, the Mole Person is little more than filler in the Universal Monster display. Despite some compelling design elements and an expertly realized sculpt, this figure is still just kind of there. That’s not to say it’s bad, it’s just not as exciting as, say, any other figure from the line. That said, if you love Universal monsters, you’ll want this ugly little critter despite his limitations. After all, someone needs to stand in the back! 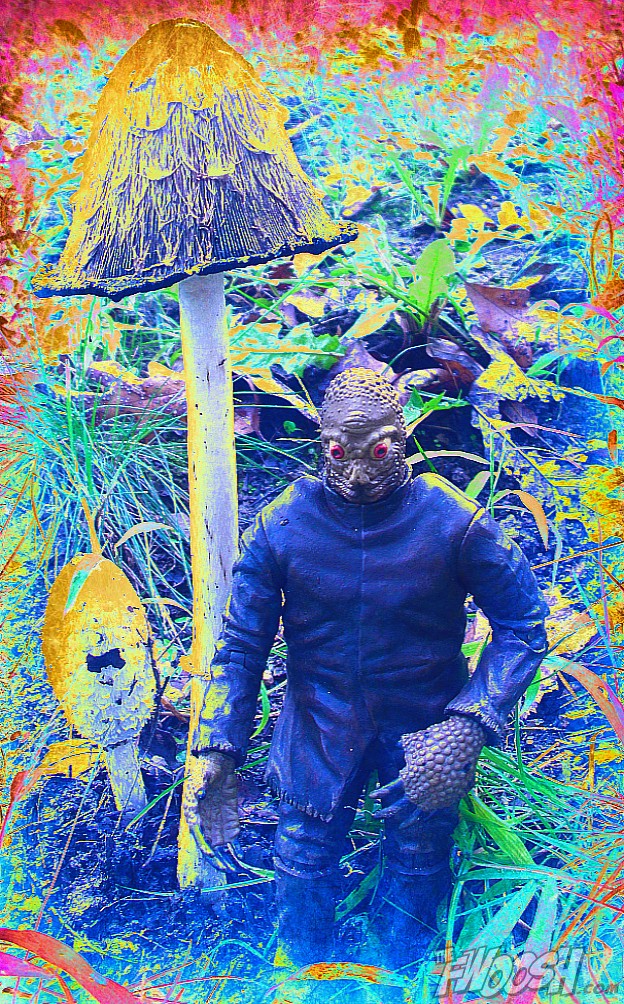