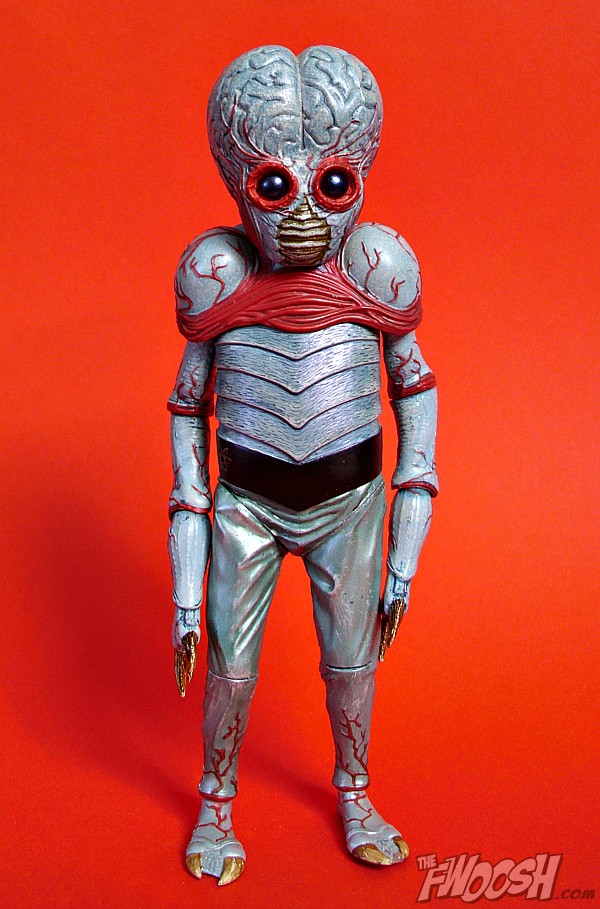 Ah, the Metaluna Mutant. I know the name now because of all of the merchandising the character has seen in the last decade, but as a kid I had no idea what this guy was — other than insanely cool, that is. Though it would be years before I saw the movie in which it debuted (Universal’s 1955 classic This Island Earth), I still knew the Mutant well. Growing up in the 1970s, it’s image was a mainstay on trading cards and in popular magazines like Starlog and Famous Monsters of Filmland. Without a name to distinguish it, the Mutant became a “universal” monster in the truest sense, it’s ubiquity creating an all-purpose alien that personified the unquantifiable terror and visceral punch of the best of 1950s sci-fi weirdness. 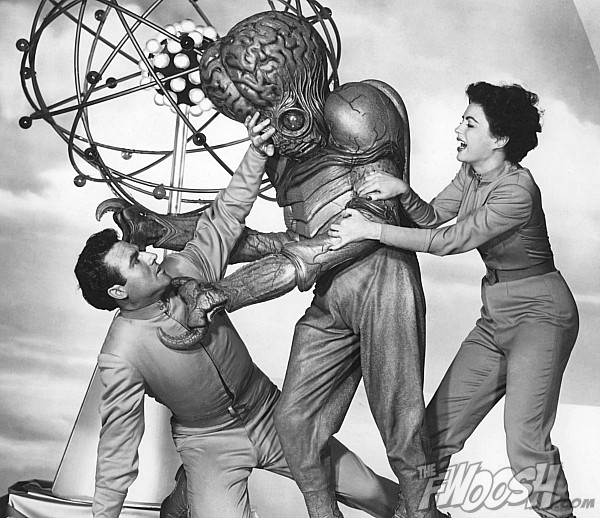 The Metaluna Mutant was immortalized in plastic in wave 3 of Sideshow Toy’s Universal Monsters line. The figure stands 8 inches tall and features 11 points of articulation. Like all figures from the line, the Metaluna Mutant came with a movie-specific base with nameplate. Sadly, most of my bases were inadvertently tossed during a basement cleanup. Here’s a promo pic: 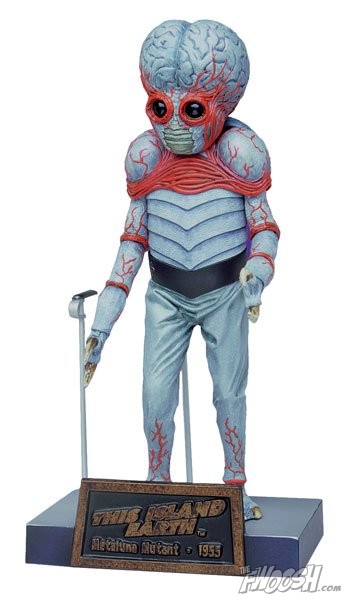 Happily, the Metaluna Mutant is more than capable of standing on his own two . . Whatever those things are. 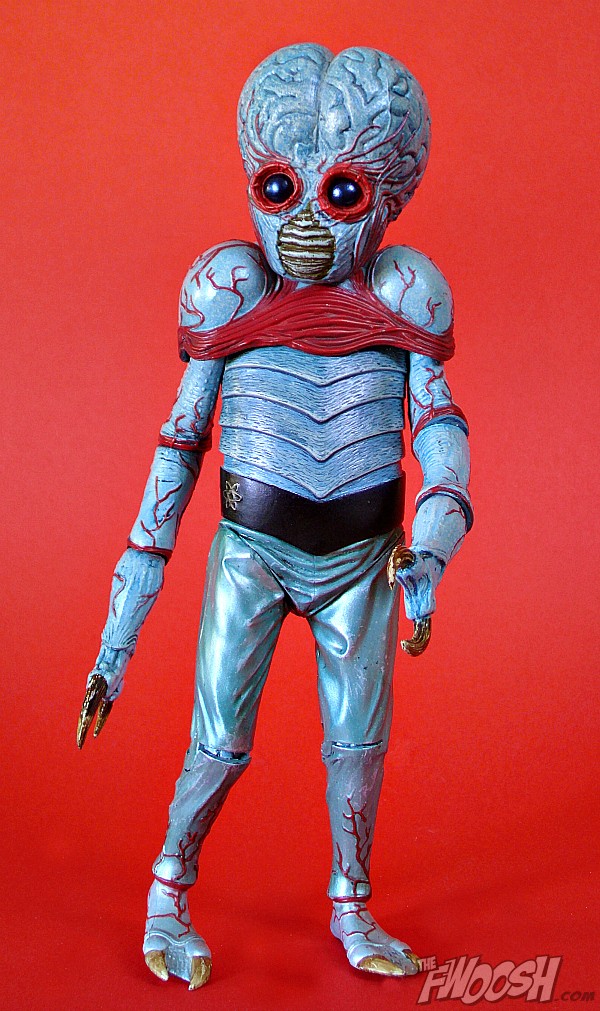 The Mutant has a pegged neck and shoulders, a swivel in both the elbows and claws, pegged hips, and single-jointed knees. The movement of the arms is limited due to the creature’s bulbous shoulder-sacs (eeew), so your Mutant won’t be doing the Wave any time soon. That said, the extra joint in the arm allows the claws to either be in “pinching” or “grasping” positions, which adds to the display options. 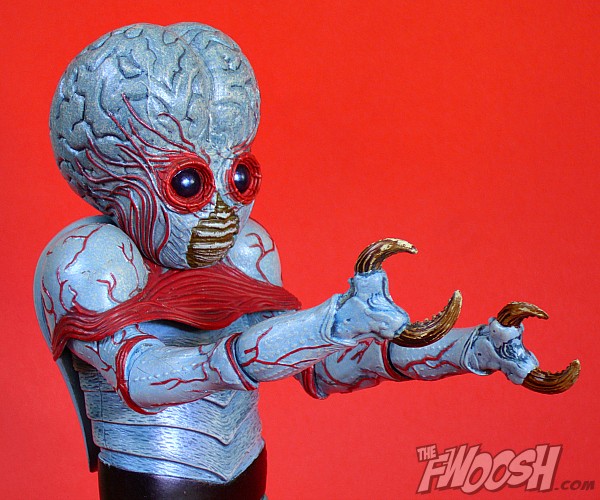 Like the Creature from the Black Lagoon, the Metaluna Mutant has been saddled with the dreaded “V-crotch.” Obviously, this limits the movement of the legs on both a physical and aesthetic level. Sure, you can push them forward or back far enough use the knees, but you end up with ugly separations in the sculpt. Such a poor choice cheapens the figure, making it look more like those tacky PVC dolls of the 1990s than the high-quality product it actually is. 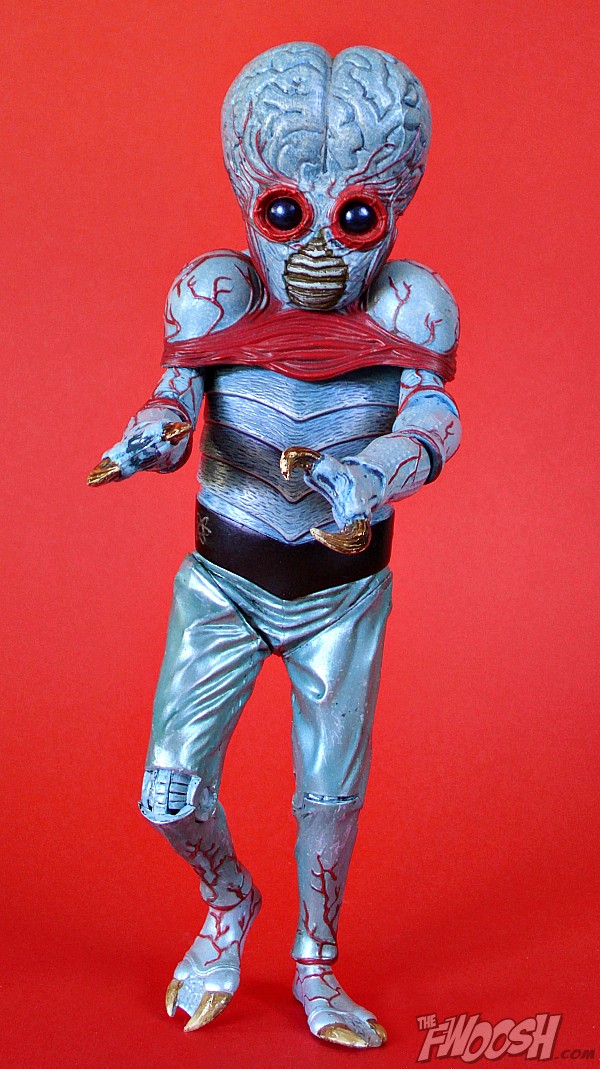 Like all Sideshow Monsters, it’s the sculpt that’s the true star of the show here. The Metaluna Mutant was designed by Disney animator Millicent Patrick (The Creature from the Black Lagoon and The Mole People), and this figure is unwaveringly faithful to her vision. Every cranial crease, every bulging vein is present, providing us an uncannily lifelike representation of an artificial creation. 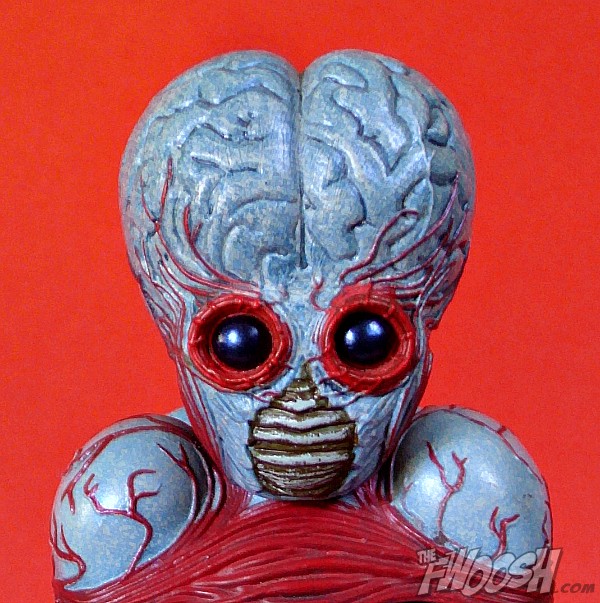 Sculptor Oluf W. Hartvigson does his usual stellar work here, delivering another stunning likeness. While any artist in the industry could take the Mutant’s basic design elements and bash out a head, few could hope to infuse their work with the sense of life and vitality inherent in Patrick’s design. There’s a malign intelligence and fearful vulnerability in the monster’s deceptively simple features, and Hartvigson captures this beautifully. 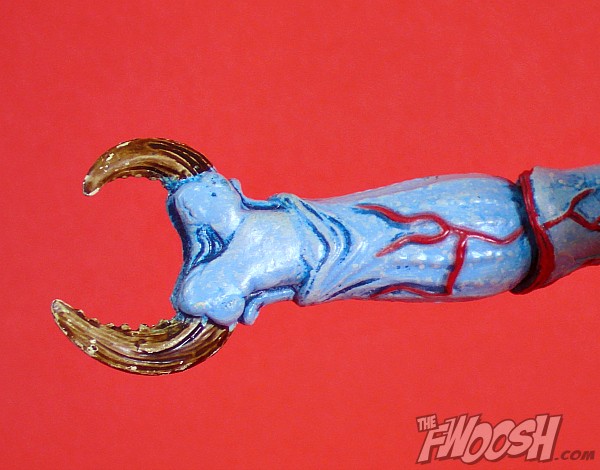 The appendages are especially lifelike; its fearsome claws are chipped and wicked looking, with deep grooves worn into the surface. The arm itself has wrinkles, tendons, muscles, veins, and a general surface texture that’s unquestionably “alien.” In fact, there’s not a spot on this figure that doesn’t feature some detail. 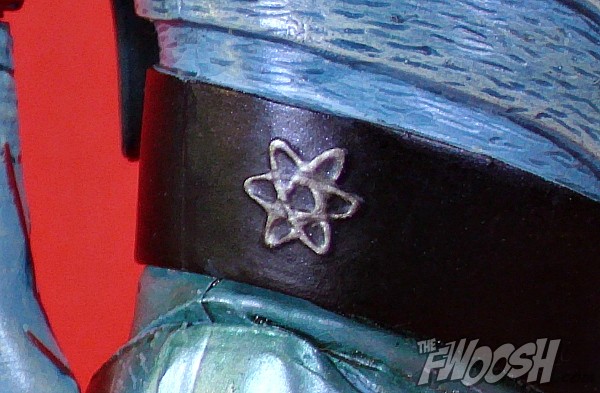 Dig this jazzy little atomic symbol on his cummerbund — I guess it’s like the Nike swoosh for Metalunans. This is a good point to talk about paint. Remember when I said the sculpt was the star of the (Side)show? To run with that analogy, the paint is an up-and-coming understudy gunning for top billing. 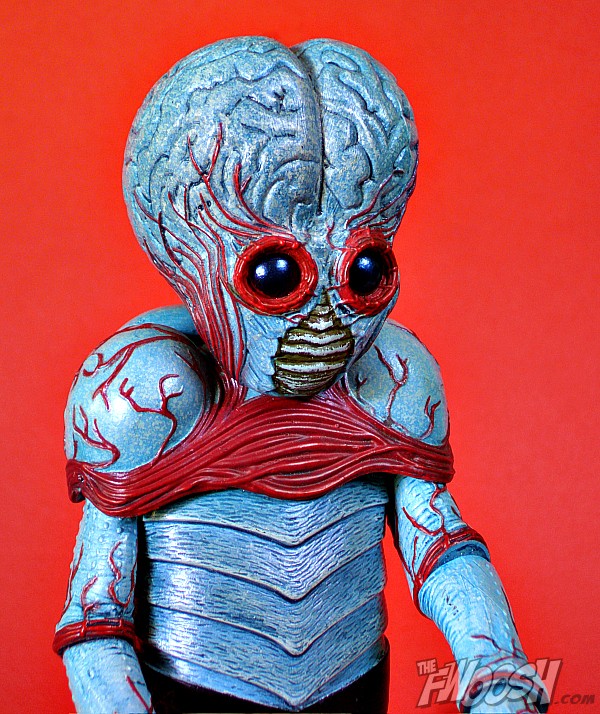 There’s a lot going on here, and all of it good. Multiple apps bring out all of the detail in the sculpt; a nice wash finds all of the fine detail in the surface, while some expert drybrushing brings out the raised features. Metallic oversprays add to the illusion of life, providing the Mutant with a glossy, insect-like sheen. 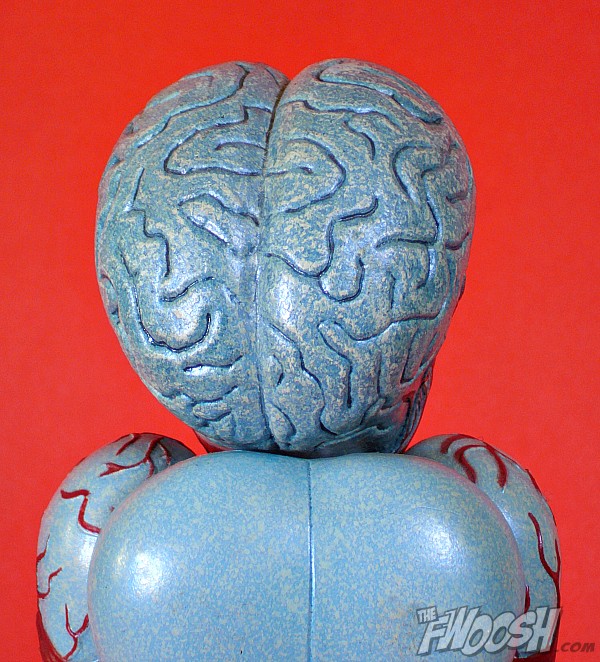 Even areas that are hidden during display get the full treatment. The paintwork on the brain really sells its organic nature, while the red paint used for the veins has a satisfyingly vascular tone. The purple peepers are the eye-cing on the cake, giving the Mutant an intense gaze. 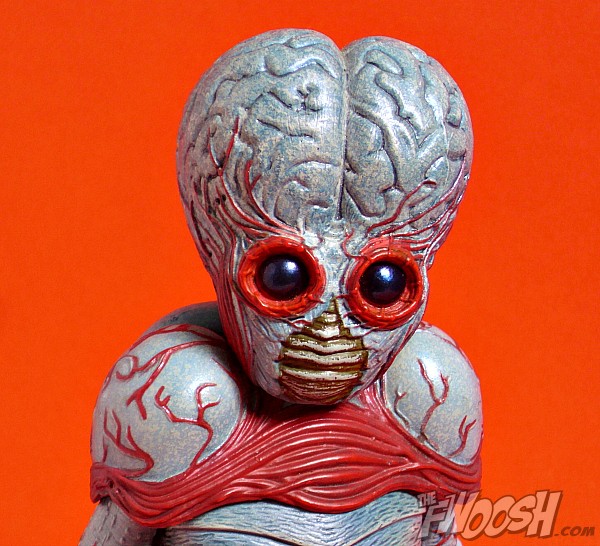 The Metaluna Mutant is another terrific offering from Sideshow. While he may look a little out of place next to gothic horrors like Dracula and Frankenstein’s monster, there’s no denying he adds some pizzazz to the omnipresent grays, blacks, and browns of the Universal palette. The figure was also issued in both “Silver Screen” and translucent blue editions, but if you have to have one, stick with this version. It has yet to be topped. 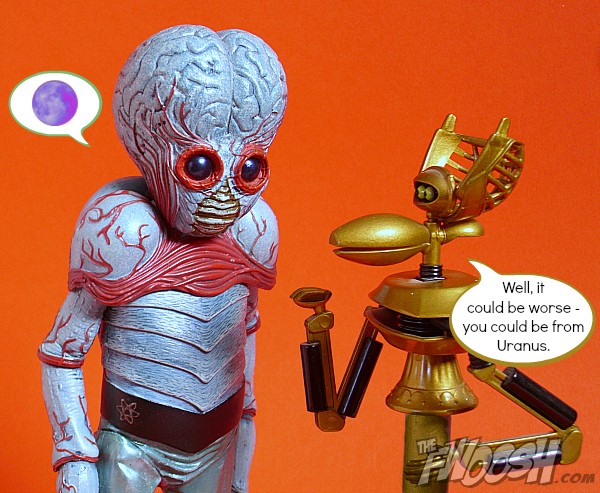