It’s October, and we would like to formally welcome you to the first day of Fwoosh’s now-annual celebration of all things scary: Hallowpalooza. Whether it’s horror comics, horror films, or horror toys, we’ll be dedicating the entire month of October to the darker side of entertainment. Halloween is the one time of the year where it’s not only socially accepted, but socially expected, to revel in killers, demons, ghosts, and all the things that go bump in the night. We here at Fwoosh will not be left out.

Back in 1998, McFarlane Toys began a series of action figure lines that brought the big-screen boogiemen into homes everywhere. Grabbing the licenses to some of the most recognizable horror icons, McFarlane started Movie Maniacs, where some of the most beloved killers finally got high-quality sculpted action figures. Now, McFarlane was unfortunately not known for articulation, so the majority of these are closer to statues than the fully functional toys of today, but back then these were the height of cool. Movie Maniacs lasted 4 waves, but I only picked up a handful of them, mainly because they became increasingly difficult to find.

While it didn’t stay strictly “horror” — including the likes of Edward Scissorhands, Shaft, and the Crow — it did hit most of the big guns in the horror world. Let’s take a look at the most notable entries: 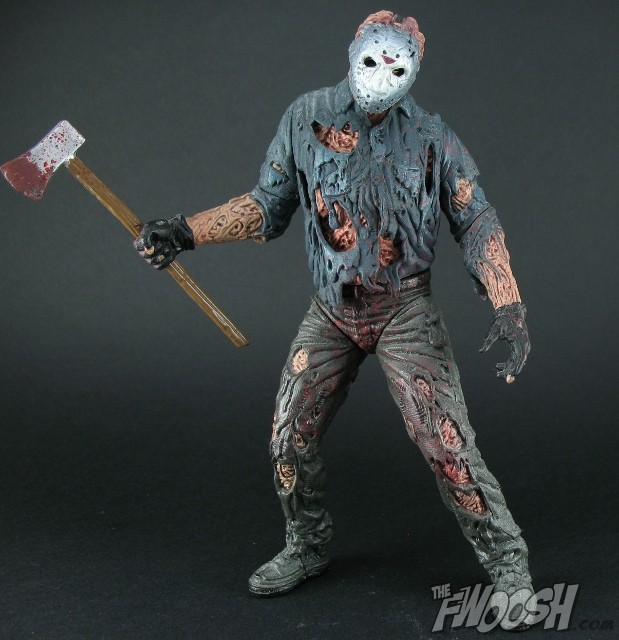 Jason Voorhees is the poster child for the unstoppable slasher-movie killer. While he didn’t even debut in the first movie of his Friday the 13th  franchise, Jason and his trademark hockey mask quickly became one of the the most iconic juggernauts of destruction ever. From Camp Crystal Lake, he’s sent scores of horny teenagers to their deaths, and his action figure shows every sign of those years of abuse, impalings, stabbings, drownings, and so forth. This is a later-series Jason, and you can see the cumulative years of damage done to him. This Jason has been burned, he’s been left to die underwater, he’s been shot and stabbed, and he’s come out the other side to kill again. The Movie Maniacs series featured mostly cut joints, meaning no Marvel Legends-styled articulation to be found since they predated Marvel Legends by a few years. Jason is one of the most articulated of the bunch, though, featuring cut joints in his hips, elbows, wrists, shoulders, neck and waist.

He’s probably my favorite of the figures due to his slightly better than average articulation, but the more recent NECA offerings easily put him to shame in that department. Still, the sculpt holds up to this day, which isn’t bad after 15 years. I’d love to see this version with improved articulation. He came with a machete (that he can’t really hold due to it being too big for his hand), an axe, and a harpoon. 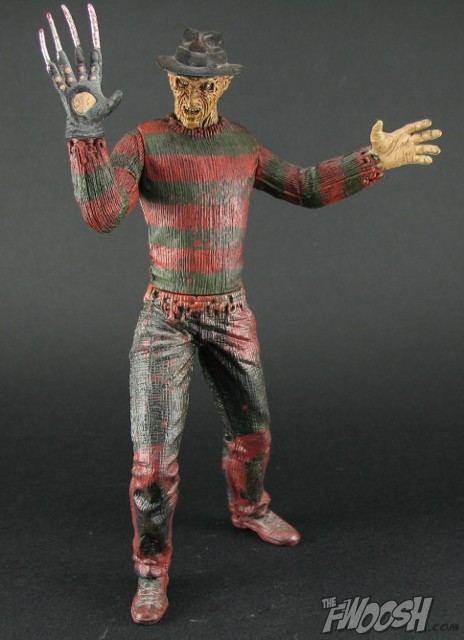 Freddy is tied with Jason as one of the most revered horror icons. Freddy has a slight edge by having a bit more of a personality to him.  Plus his first, third, and seventh Nightmare on Elm Street movies are easily better than any of the Friday the 13th movies. However, the worst of them are probably worse than any in the Friday the 13th canon, so it’s a toss-up.

Freddy was a bit more frustrating in his articulation. He’s a statue from the waist down, and his arms have only shoulder and wrist articulation. Throw in waist and head swivels and he’s not going to be chasing down nubile teen girls with any success. Plus, his likeness isn’t as strong as it could be. It kind of looks like Freddy, but there’s something a bit off about it.

Freddy doesn’t need a lot of accessories since he wears his killing implement at all times, but he does come with Marionette Freddy from The Dream Warriors, the third movie. Pretty cool.

“Who will survive and what will be left of them.” 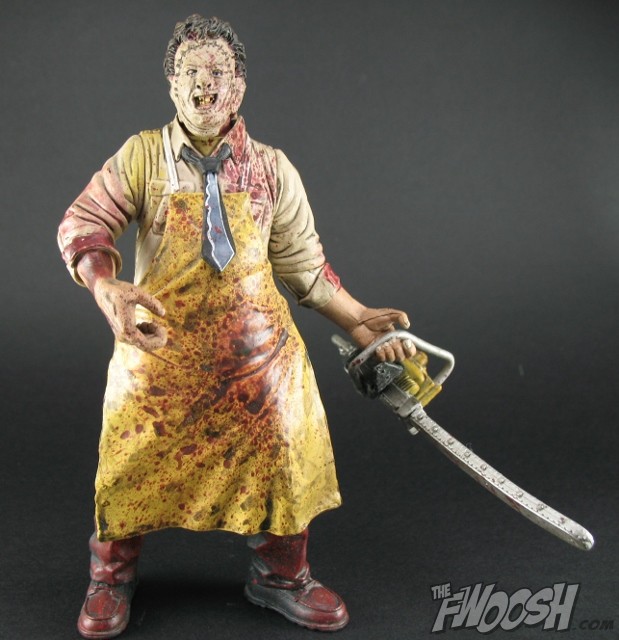 Inbred cannibals hardly ever get action figures, but when they do they always leave an impression. Leatherface is more horrifying than Jason and Freddy in that he could actually exist. He’s not a spectral being that exists in dreams or an undead killer that haunts a camp… there is room in the real world we live in for a chainsaw-wielding nutbag like Leatherface. Hell, he was based on noted serial killer Ed Gein, so there’s already a precedent. While most horror movies are escapist fun, Texas Chainsaw Massacre traumatized audiences in the ’70s and has not diminished with age.

Leatherface features the best headsculpt of the line, full of disgusting personality, bad teeth, and wrongness. His articulation, however, is worse than the others, so much so that holding his chainsaw — his signature “thing” — is precarious. If you twist the elbows and the shoulders right, you can approximate him holding the chainsaw, but it’s not easy, nor is it perfect. With his full-length butcher’s apron, he’s a statue with moveable arms. But he looks pretty standing there. He came with his chainsaw, a bloody bucket, a hammer, and a severed arm and leg. And this was sold at Walmart! Amazing.

“We all go a little mad sometimes.” 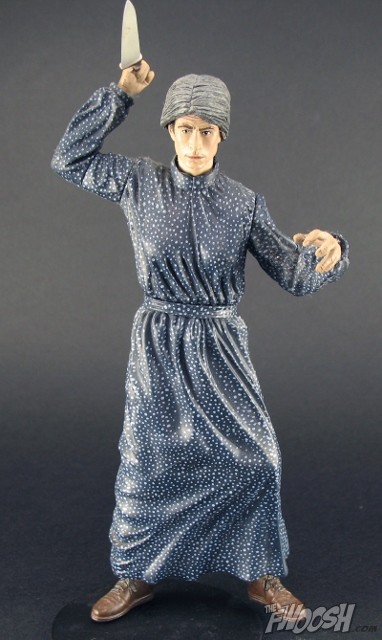 Psycho waits for you to be comfortable, and then hits you in the face like a knife in the shower. While Leatherface is terrifying due to the fact that he could actually exist, let’s face it, you’ll see him coming. He’s an inbred freak that wears a dead-human mask. But Norman Bates is the normal guy that lives everywhere, with a pleasant face, a nice smile, and a slightly shy demeanor. He’s the guy that holds the door for you, that helps you with your groceries, that is so helpful when you need help.

And besides, it’s a cross-dressing toy. For real — that is something different.

Due to the dress, Norman, like Leatherface, is very minimally poseable. His arms move, but he’s only good for stabbing, so you can recreate that pivotal scene as much as you want, but don’t expect to do much else. I dig the removable wig. I didn’t mean to rhyme there, but it works well.

“Death has come to your little town, sheriff.” 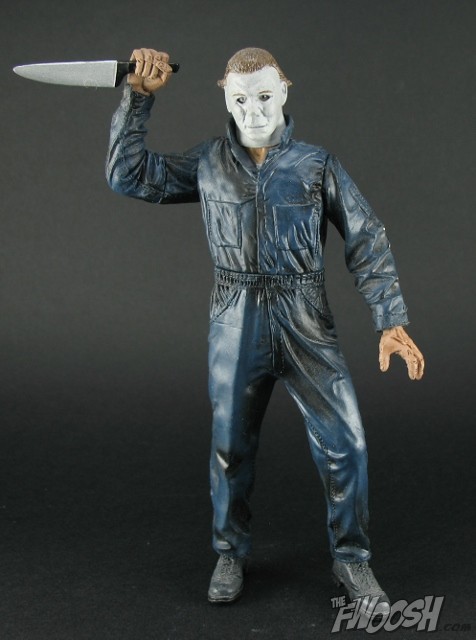 Without Halloween, none of the rest exist. Michael Myers put on a mask and made screen history. Stalking teen girls, killing random people — Michael made his mark by being an unkillable engine of murder without pity or remorse, and the audience ate it up. While the follow-up movies in the Halloween franchise never reached the heights of the first one, which was a true groundbreaking success, Michael Myers nevertheless left his mark. And he did so while wearing a William Shatner mask. How many of us can say the same thing?

Michael’s another in the “statue” category, without even a waist twist. He’s good for stabbing and lunging, but only if he stays still. He has shoulder, neck, wrist, and right bicep swivels, but I guess people come  for the sculpt. At least none of these have disappointed on that side. Michael comes with a butcher knife and a pumpkin, which is all he needs because he will kill you and then do that creepy staring while turning his head slightly to the side thing. 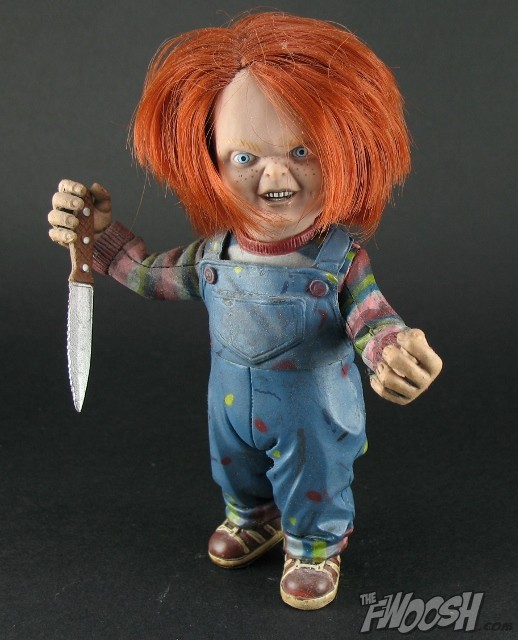 Chucky is the weirdest of the figures because he’s in a completely different scale to the rest. I’m not sure if I expected him to be actual doll-sized (relative to the rest) when I first heard about him, but he’s not. I guess that’s for the best since that would have been an expensive tiny toy, but as it is, he looks out of place with the rest if you’re trying to build an in-scale horror display. Fortunately I never really was nor cared about that, but still, that is odd. Odder still is the rooted hair. But in a way that makes a bit of sense, like replicating the doll he actually was. I don’t know. I stopped making sense two sentences ago.

The Child’s Play franchise is an odd one. Entertaining, but odd. A killer’s spirit inhabits a child’s doll and it starts to kill people. It’s not a new premise, but it made for some entertaining movies despite wondering how it overpowered people so easily. I think I can beat up my toys. I mean, most of them at least.

Chucky came with a knife and insanely limited articulation. Neck, shoulders, and wrists. Bam, that’s it. 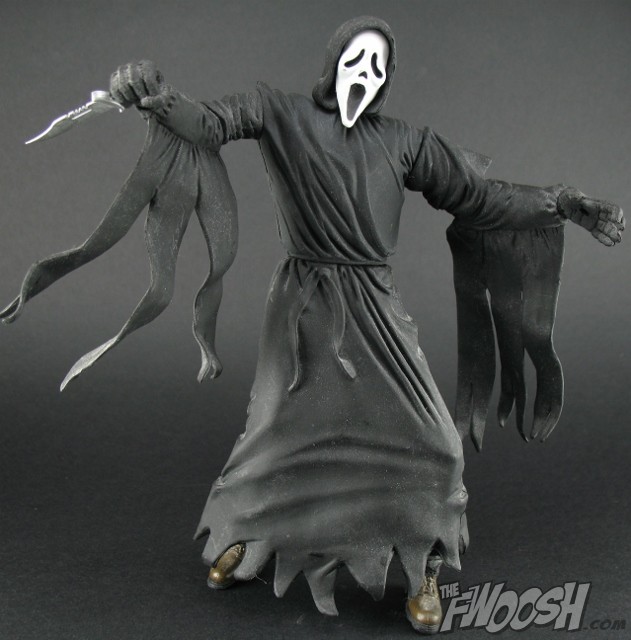 It’s fitting that we’re at the last figure, because Ghostface is the offspring of the slasher movie. A self-aware, meta-murderer all too conscious of being in a horror movie, he kills while taunting the victim that they should have seen the movie they’re about to die in already… or something like that. The Scream franchise as a whole is a smartly crafted reaction to the slasher genre, a genre of which Scream is perhaps the last truly successful member. Ghostface is a classic design paying homage to a classic aesthetic and easily joins the ranks of the elite by learning from the best and taking it to the next level.

I like the fact that Ghostface was a mutable concept. By being grounded in reality and not allowing for undead zombie-killers, Ghostface required real killers and real-world rules and found ingenious ways to skirt those limitations. It’s a slasher movie made for fans by fans, and feels that way in every self-aware frame.

Ghostface comes with a knife and a cell-phone. Remember those things that were slightly larger and bulkier and people used just for calling? Yeah, I know, crazy talk, maybe someone should tweet about it.

He’s — and this is the last time I’ll say it — yes, a statue due to his costume, and his arms are jutting straight out from his body, so it’s pretty hard to stab people, but it was the ‘90s and toys were still learning. But each and every one of these guys looked great just standing there.

Toynology has improved and we’re finding easier ways to marry articulation and aesthetics since the height of McFarlane’s time, but it’s amazing how ahead of the curve the sculpting was back then. We’re seeing the benefits of that now in everything we buy, and these deadly toys look as good now as they did back then. 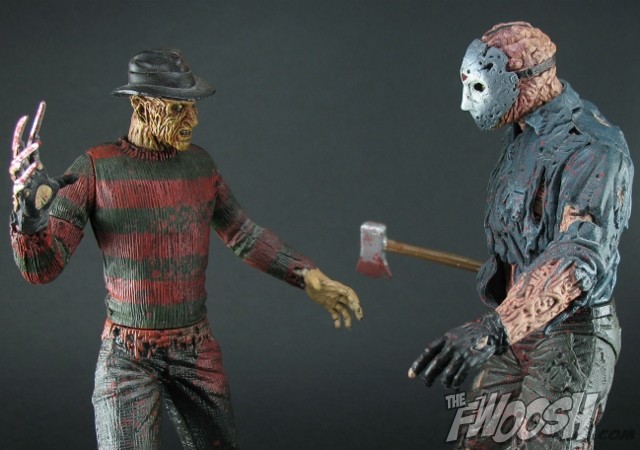