As we continue our Halloween celebration here at The Fwoosh, we take a look at a figure based on a concept so perfectly natural and obvious that it almost makes me wish this was a foundational character trait from the get-go. So grab your garlic and holy water-filled squirt guns as we take a look at Mattel’s Vampire Batman!

Released just in time for Halloween, this blood-sucking interpretation of Batman is based on his appearance in the Elseworlds (that means it’s not canon, kids) comic Batman and Dracula: Red Rain, wherein Batman becomes a vampire in order to more effectively take on the king daddy of all the vampires — Dracula. Check out the bio below: 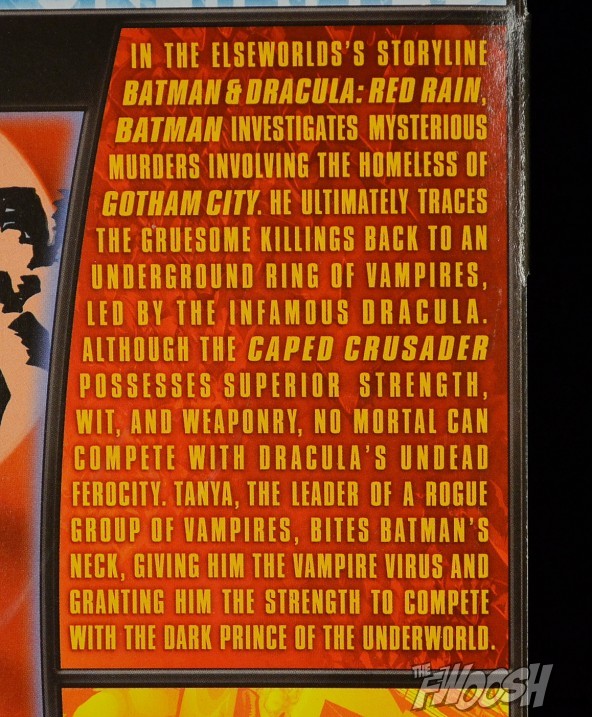 The packaging is the standard Batman Unlimited fare we’ve seen on the pegs at most retailers for the past year, but since the line is effectively dead with this figure being part of one of the final waves to see release, scoring one may or may not prove to be a challenge. We’ll see. Stores like Target have already stopped carrying the line, so specialty shops or Amazon may be your safest bets if you’re on the market for one. 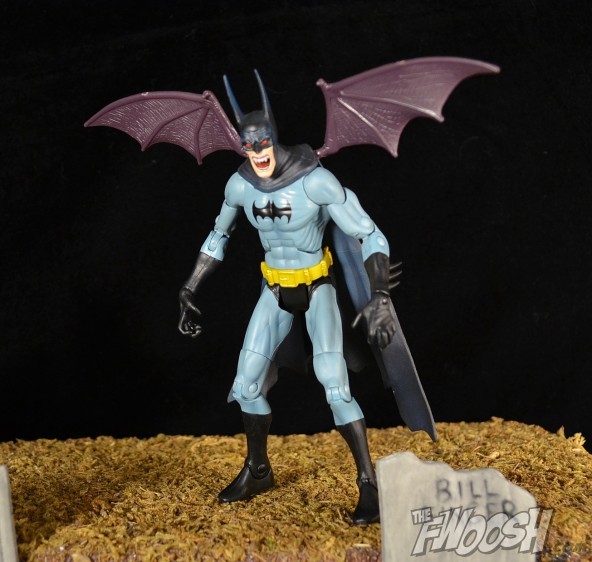 First of all, it’s awesome that he actually looks like a creepy monster, as though his humanity has been compromised outwardly as well as inwardly. It’s actually a pretty scary design and it works well with his costume. Seeing a Batman that’s so gangly and lithe is unnerving in itself.

Secondly — and let’s get this right out of the way — double elbows! Between this guy and the SDCC Batusi Batman, we finally get Batman figures with double elbows, which should be a good thing, but then we’re left with the reality that since the line is effectively done, we’ll never get a good, standard Batman with double elbows, so as cool as this figure is, it actually does more to serve as a reminder of what we don’t have, when all it should be doing is just being a cool figure. Aside from the double elbows, it’s the standard Mattel DC articulation with the addition of some wrist hinges like we saw on the original Green Arrow. 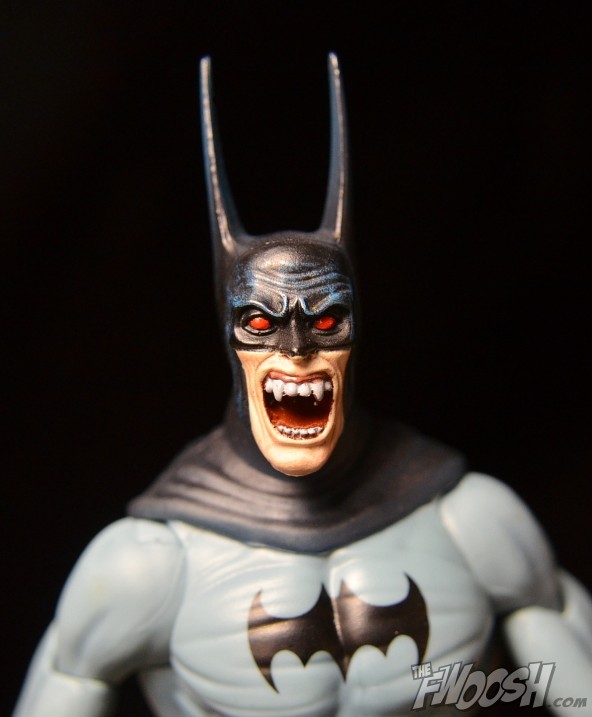 His hands in general are pretty creepy looking. They’re sculpted in such a way that when you angle them with the wrist hinge just right, they totally look like gnarly outstretched zombie hands. I think they look pretty great, and it’s probably the only time I’ll ever be happy to have a Batman figure that doesn’t have fists. He doesn’t need to pound on the bad guys; he just needs to grab a hold of them so he can drain their blood straight from their faces. Or something like that.

His articulation breakdown is as follows:

The head sculpt has some nice detail with some oddly giant vampire-chompers to enhance the creepiness. The large, exaggerated mouth and the red eyes succeed in making him look feral, like something that will eat your face off. The light blue dry brushing around his cowl totally works and adds some depth to his features, and it somehow makes the black of his mask look “more” black. It’s a cool effect.

He comes with a pair of bat wings that can be inserted into two holes located on his shoulders beneath his cape. The cape is actually sculpted in such a way as to allow convenient access to these holes, and it mostly works. I had to take the hairdryer to the cape to soften it up so I could get the wings in place without having to fight with the cape too much, but once they’re in place the cape doesn’t hinder them much at all. They don’t really do much, but they can swivel at the connecting point — that’s it for articulation in the wings.

He’s a standard size for a Mattel Batman figure, and it’s really cool to see that they went with an entirely new sculpt for him (meaning a new sculpt for a Batman figure; the parts themselves may or may not be new). Everything here is new for a Mattel Batman figure right down to his hands and feet. It is interesting to see him side-by-side with a standard DC Universe Classics Batman because he’s so different in terms of size, like becoming a vampire zapped some of his muscle mass or something. He’s still a formidable presence next to Adam West, but who isn’t? 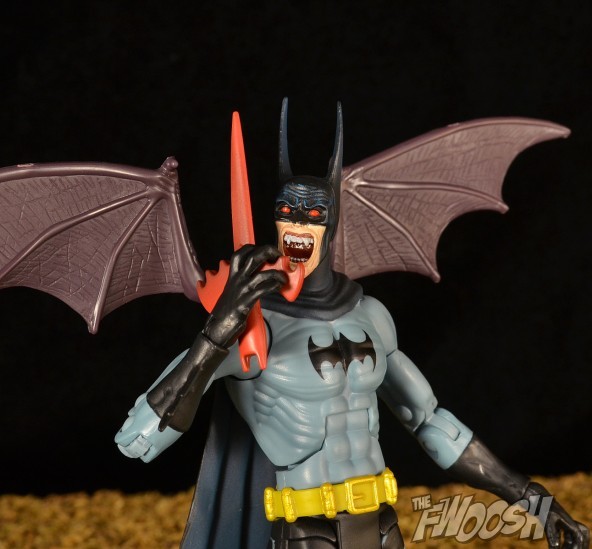 In addition to the wings, he also comes with a Bat-Stake — perfect for killing other vampires who aren’t himself. It’s a fun little design and reminds me of something the ’66 Batman would have carried had he ever gone vampire hunting. The one downside to it, however, is he can’t really hold it in any way that a person would hold it if they were actually going to use it to kill a vampire. The way his hands are shaped, I could only get it to stay as it is in the above pic. It’s not terribly satisfying, but it’s better than nothing, I suppose. If anyone knows of a better way to secure in i his hands, please let me know.

He may be based on an Elseworlds interpretation of Batman, and doesn’t really fit anywhere in the collection in the strictest sense, but he’s a fun figure that can terrorize your DCUC collection. 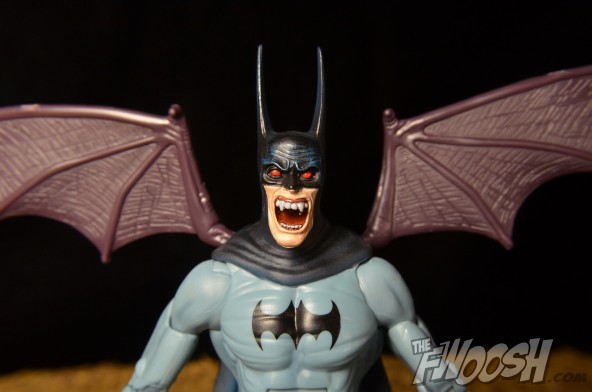 Vampire Batman is popping up in comic and specialty shops as we speak, and he can also be found on Amazon, which is where I got mine. Toys R Us, and maybe even Walmart, is sure to carry him at some point, but it may require some serious work to find him there. I think he’s a fun figure that came out at just the right time, so I’ve been having a ball with him. I honestly haven’t enjoyed a new Batman figure this much in some time, so I definitely recommend snagging one if you get the chance.