The genesis of ToyWorld’s Orion goes back to the recent soft reboot of the IDW Transformers series, when Mike Costa and superstar TF-artist Don Figueroa went back-to-basics and redesigned their cast to fit. Er, so goes the theory because “back-to-basics” in this sense meant “mash-G1-and-movie.” The result is one of my favorites of Don’s designs for the Big Bot, and that’s saying a lot — his work is easily some of the most definitive in toy and art where Prime is concerned. 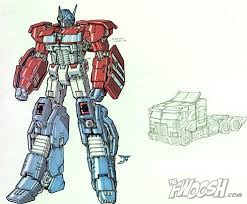 The design caught on, and despite some of the other elements (like movie-style faces on classic characters) not quite hitting the mark, Prime’s look has stayed pretty consistent to this design since. 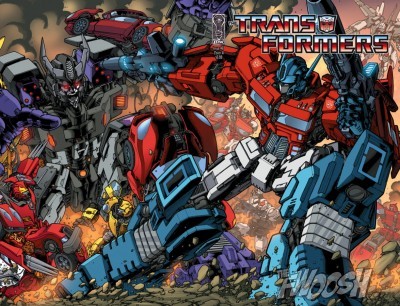 Curiously, Hasbro has been slow to adopt this design for figure use, to date only putting out a pretty cool, but very small, Cyberverse-scaled version. So in another ToyWorld first, Orion gets to be the biggest and most impressive option for those looking to get a comic-styled Prime. 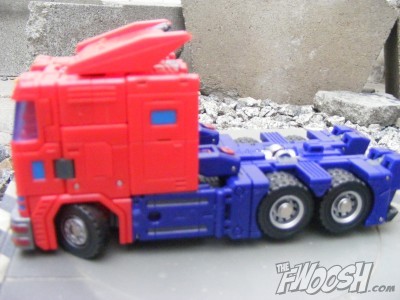 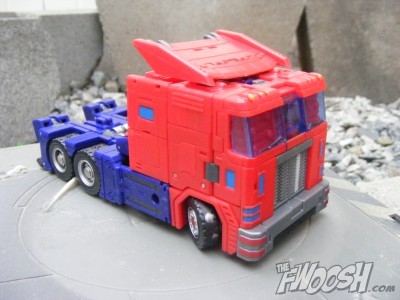 Let’s start with vehicle mode — and let’s also get this out of the way — transformation of this thing from robot to vehicle will make you cry like a little girl.  I like to throw out words like “intuitive” or “clever” when talking transformations. On the tougher ones, “complicated,” “intense,” and so on.  This one is evil. Well-designed, very impressive, but pure robotic evil. Everything is designed to fold and tab into place securely, so both modes become very sturdy, but the flurry of parts disconnecting and reconnecting is the closest I’ve come to seeing a move-like transformation in a toy, and I don’t know if that’s a good thing. 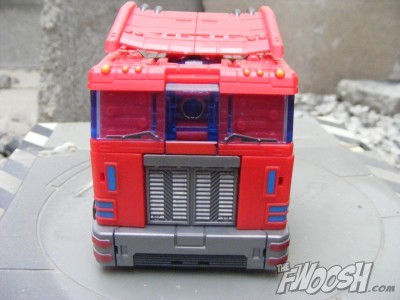 Anyway, the results of said evil transformation are extremely satisfying in both modes, and the truck mode exemplifies that nicely.  A big, solid brick of vehicle, he stays securely in mode, rolls nicely, and even incorporates wheel poseability — a very Alternators-like touch. The truck is very on-model, and rivals even MP-10 in terms of detail. I noticed while uploading pics that I forgot a little detail on his cab windows: the middle section has a piece of body molding that joins with the louvers over the other windows; I just forgot to unfold it. Orion packs up into a relatively small alt mode, coming in very close to Classics Prime’s cab size, which therefore makes him compatible with various classics-scaled 3rd party trailers. 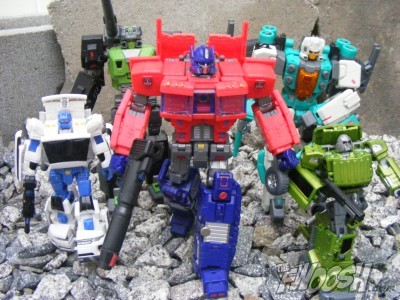 After the punishment/transformation, Orion becomes a big, solid, and very articulated robot. He’s still very evocative of the original Don Fig design, but he seems to have squared off a little more, as other artists have done, bringing him a little closer to his G1 design.  I’ve seen some great touch-up work done to this figure already, like adding silver striping to his “ribs,” but since he’s been depicted both with and without silver paint on his torso, I’m still undecided. 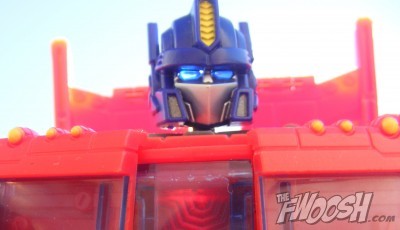 The head was a bit underwhelming in early pictures, but the final product turned out pretty nice. He has fairly large light-piped blue eyes that work well in direct light, but I ended up painting them in because without direct light he comes off kinda dead.  He’s not alone in this plight. Orion has a little less in the accessories department than other ToyWorld figures, but he does get an Ion Blaster and a Matrix.  The Matrix is nicely done, and it fits very securely in a well-designed chest compartment.  As nice as it is, I think I’ll be leaving it out. More on that in a minute … 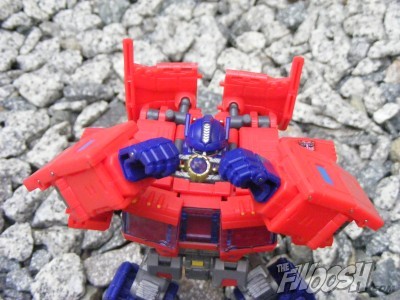 Orion had been billed as a “voyager-ish”-class figure, but I think he’s really almost in the old Ultra class in terms of ‘bot mode.  He squares off so nicely with the other ToyWorld Autobots, it’s almost reason enough to make them a collection of their own.  He also looks bad-ass with the recent Hasbro IDW crew. But I even like him with the Masterpiece scale.  His height is almost up to Faith Leader’s, making him stand respectably between the Autobot cars and Grimlock. I realize his style is not nearly as G1 as the other MPs, but in terms of quality and size, I don’t think he’s far off, and that’s a helluva compliment.  In fact, I’ve decided that in my collection he’s going to be the only 3rd-party figure to keep his box name; I’m going to use him as a Matrix-less Orion Pax, who just happened to scan in an earth alt-mode. 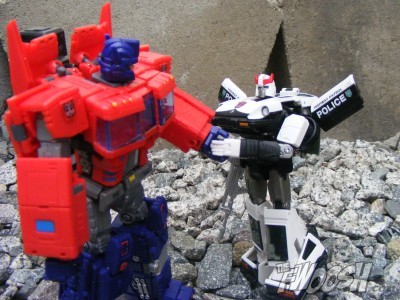 It’s says a lot about a figure when I get to the end of the review before I talk about quality control or articulation.  Honestly, with ToyWorld these are becoming almost afterthoughts, like the good ol’ days of Mattel DCUC figures. Basically, he continues the high-quality plastic and articulation that have become standards in their figures. I was terrified about putting stress marks on some parts during transforming, but the pieces are designed to have a little give for fitting, and I have noticed very little actually occurring — less than on my MP-10, actually. 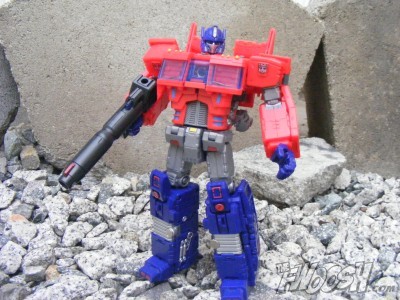 This may be low on the needs list of a lot of Transformers fans, but if you’re a Prime fan, IDW fan, or just looking to replace your other Don Fig-designed Prime from 2006 in your classics collection, this one begs your consideration. Orion holds his own even against his giant Masterpiece counterpart.