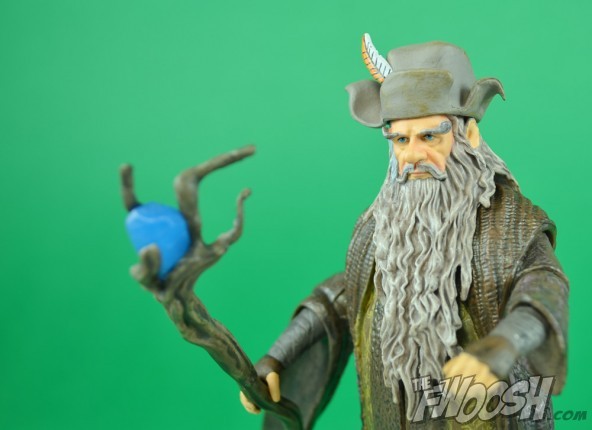 I love it when we are in the midst of a Peter Jackson Middle-earth bonanza. Without fail, The Lord of the Rings movies were my favorite parts of Decembers 2001-2003, and the new Hobbit trilogy is following right in LOTR’s foot steps. Plus, being an action figure collector, I get to double dip on the anticipation as a new Hobbit movie means new Hobbit toys. The Bridge Direct is the master license holder for action figures for the Hobbit movies, and their 1:18 and 1:12 action figures to support The Desolation of Smaug are starting to hit Toys R Us stores nationwide. The Bridge Direct was kind enough to send along a sample of the 6-inch figure of the lovable and wacky wizard Radagast the Brown for a preview.

Like several Middle-earth characters, Radagast has benefited from Jackson’s expansion of many of the more minor plot lines that took place during The Lord of the Rings and The Hobbit. While he is one of the five Istari, Radagast had a very small part (in flashback) in The Lord of the Rings and was only mentioned as a “cousin” of Gandalf in The Hobbit. Personally, I like that they are getting to many things in the movies that Tolkien was never able to expand upon in the books, and Radagast has always had a air of intrigue about him, so it has been neat to see what characterization they have given him to make him a memorable presence on screen.

While Jackson and friends made him a bit more absent-minded and free-spirited then Tolkien ever really suggested in An Unexpected Journey, as a hermit that cares more for animals than people, it doesn’t take much to draw the lines to that characterization. Plus, I actually liked the bunny sled, Plus-plus, I think we have yet to see the very best of Radagast yet, so I am very much looking forward to his part in The Desolation of Smaug. The wait is not much more now, so hopefully he and Gandalf will be laying down the law in the Ruins of Dol Guldur come December.

At any rate, I am all set to begin my own adventures with this new Radagast figure. I am not quiet about the fact that 1:12 is my preferred scale, but I have been supporting both scales from this line, so I REALLY hope that there will be more product coming our way soon; I have the rest of Thorin’s Company that are absolutely required for my collection, and I will take anything at the 1:12 scale. Right now, Radagast is joined by a reissue of the Legolas figure and Azog. Since I already have Legolas and I grabbed the Azog at SDCC, Radagast was the one that I have really been looking forward to for this round, and, for the most part, the figure turned out pretty nice.

See, not only do I prefer the 1:12 figures on their scale alone, but I love them also because they go perfectly with the ToyBiz Lord of the Rings collection that has been a centerpiece in my toy room for a long time. So I am happy to report that not only does Radagast look good with The Bridge Direct’s Thorin, Bilbo, and Gandalf figures, he blends right into the larger Lord of the Rings display nicely as well. The Bridge Direct is still kind of new to the action-figure game, so there are a few nits to pick here and there, but, overall, they have delivered a nice rendition of the kindly Sylvester McCoy character.

If Radagast is known for anything past his personality, it is his unique wizard getup. His asymmetrical robes, mismatched shoes, and odd hat cut a unique silhouette, and that is not even getting to the bird nest and avian excrement in his hair. The Bridge Direct has done a pretty solid job of getting all of the shapes and colors represented well, and they used some nice gold highlights to bring out the shimmer of the different fabrics in the intricate costume. The hat is shaped correctly as well and fits tightly on his head, and while the feather is included, the paint details on it are not quite up to the rest of the figure.

The likeness to McCoy is actually quite good and this is the more serious and dour Radagast, rather than the friendly and bumbling friend of Gandalf. I think I actually prefer this version of Radagast, and I hope we get to see more of him in The Desolation of Smaug. One thing that did not hit, though, is that it looks like the bird’s nest on his head was lost in the paint job at the factory. It is sculpted, but it blends right into the hair color, so it doesn’t stand out as much as it could. This might be a minor thing, but I wanted to point it out just in case this is something unique to the sample and it is highlighted better on figures that are found in the wild.

Radagast also comes with his blue-gemmed staff that he carried in An Unexpected Journey and Gandalf carries throughout The Fellowship of the Ring. The head of the staff and gem might be a bit bigger than they were in the movies, but not to the point of their being completely out of proportion. Radagast also features about the same articulation scheme as The Bridge Direct’s Gandalf figure, so if you have that figure, you will know what to expect. The rundown is: 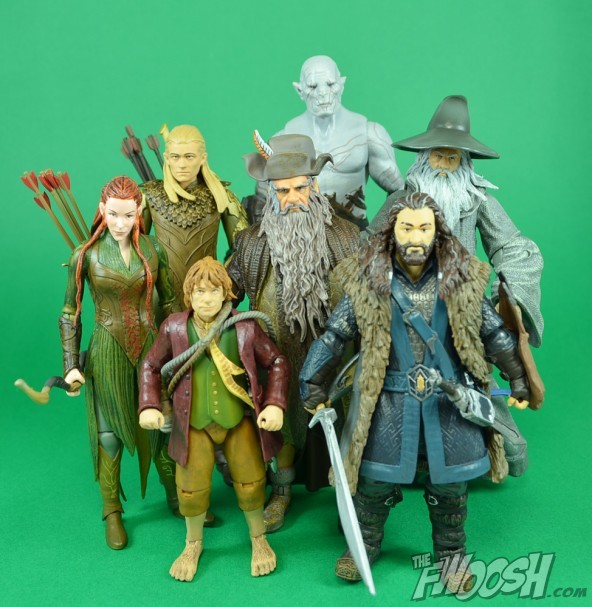 Yay for more Hobbit movies! Double-yay for more Hobbit figures! I am very pleased to add Radagast to my 6-inch collection, and I hope there are a lot more characters coming in both scales. The Bridge Direct is being cagey about what is still to come in support of The Desolation of Smaug, but I hope we at least get the rest of the 1:18 dwarves and another series of 6-inch figures. Building Middle-earth is just too much fun, and I hope we can look forward to more and more product in support of these movies.

*Thanks for reading and thanks to The Bridge Direct for sending this Radagast sample along for a Preview. He is currently hitting Toys R Us stores across the nation and you can order him at the link below.