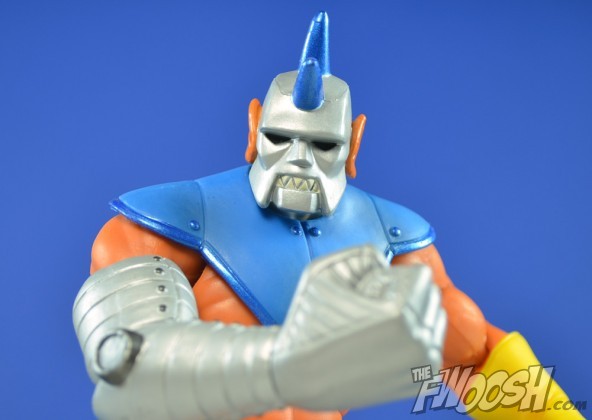 It has been a fine year for Skeletor and his Evil Warriors in the Masters of the Universe Classics line. The ranks of Snake Mountain are swelling beyond capacity, and before you know it, we are going to need a new Classics incarnation of Skeletor’s home base just to house everyone that lives there. This year alone we have gotten longtime Evil Warrior, and longtime Classics holdout, Jitsu in February, and we found out in the 2013 convention circuit that the highly demanded Two Bad and the first MOTU movie figure, Blade, will both be moving into the Dark Hemisphere in the first half of next year. However, one of the coolest parts about all of this evil overpopulation is that within one calendar year, we have also gotten the three long-lost Filmation Evil Warriors. Yep, we have been waiting DECADES for these subordinates of Skeletor, but back in March we got Fang Man, July saw Icer make his debut, and to round out the year for Club Filmation, we finish the triumvirate with the subject of today’s First Look: Strong-Or (Strong Arm)!

NOTE: Let’s just get this out of the way right now as to avoid any confusion going forward: due to reasons based on trademark legalities, Mattel has to call this character Strong-Or on the packaging. However, for the rest of this article, I will be referring to him exclusively by his REAL name: Strong Arm. I know, it is a Masters’ thesis in semantics, but you can curse the other toy company that currently holds the Strong Arm copyright to your heart’s content.

Like most characters that originated on the Filmation show, Strong Arm, Fang Man, and Icer only had one appearance in the 160+ episode cartoon, but the fact that they were actually portrayed as Evil Warriors helps set them apart from the rest of the colorful cast. I specifically remember seeing Strong Arm in a long-repeated episode of the show (“The She Demon of Phantos”) and wondering why he did not have an action figure. So I consider him, along with Icer and Fang Man, to just be a character that Mattel never got around to making. That is, until now. Yeah, the acquisition of the Filmation rights is a pretty big deal to me, and I really hope we get a continued focus on these great characters in the main Club Eternia, but also in the continuation of the Club Filmation.

Strong Arm has always been a pretty mysterious character for me. Since he did not get a ton of screen time and he did not have a vintage toy, I feel like I never really got to know him. He was portrayed as a pretty smart guy with mean teeth like Trap Jaw and a cybernetic limb that was also similar to Trap Jaw, only this one was just a big and powerful puncher (like Fisto) instead of an interchangeable weapons system. Also, was he a guy or a robot or a cyborg or an android or what? To say he is a mishmash is putting it lightly, but now that we have his figure and a bit of a background, imagining your own characterization should be a good exercise. I think that is one of the things that is the most fun about these Filmation characters: they have cool looks and a good foundation of characterization, but you get the chance to build a new toy character into your MOTU mythos. These opportunities for imagination are becoming more and more rare, so I will take them when I can.

The thing about Strong Arm, though, is that he has all of the visual qualities that make it feel like he actually did have a vintage figure. He is brightly colored, he is built mostly on basic base body, and he has an obvious “power” to use for marketing. So, while it was cool to get figures of Icer and Fang Man for the first time, if I did not know any better, I would swear that this Classics version was another update of a vintage figure. Again, a lot of that is due to the overall design, but credit should also go to the Four Horsemen balancing the details and design for the Classics. I don’t know how we keep getting figures with unique color palette combinations after all of the this time in this line, but Strong Arm’s primary blues and orange, accented with silver and yellow, is like nothing else you have gotten so far, so not only is Snake Mountain filling up fast, it is good to see that, evil despot as he is, Skeletor celebrates diversity amongst his enforcers and lackeys.

Strong Arm has an average amount of new tooling for a unique character figure. Overall he is fairly basic, so don’t expect Dactus levels of new stuff, but the 4H and Mattel did not cheat him out of anything he needed in order to stay true to his look. As I said, he is based off of the regular human base with Mo-Larr’s left glove hand and Bow’s feet, but the collar overlay, trunks, boots, and, of course, the head and right arms are completely new. For some reason I originally thought his boots were also repurposed from a previous figure, but they are actually just for him. The new collar retains the basic shape of the Filmation design, but the Horsemen have added Classics-requisite embellishments like detail lines painted in a metallic blue and rivets here and there to complement the bolts that line his titular “strong arm.” Have I mentioned that I really like the metallic blue highlights? Well, I do and color extends to his belt that is faithfully lined with spikes that recall his pretty bad-ass metal liberty-spike Mohawk.

The more apparently new pieces are, ahem, strong as well, and Dalmus Fu is pretty freaky looking, and that is saying something amongst the likes of Mer-Man, Spikor, Whiplash and all the rest. Again, is he some guy with, like, a metal head piece? Maybe, the mystery kind of adds to his character because while he has the organic musculature of the MOTUC base body, his head sculpt has strong lines and is, of course, painted in a metallic swath. I have heard the comparisons of Strong Arm to Trap Jaw, and while I certainly think they are different enough to remain wholly unique, I can see call outs to each other in the designs. For example, Strong Arm’s big metal-looking teeth are slightly reminiscent of TJ’s, but as far as the commonality in the looks is concerned, that is about as far as it goes. He has ears, almost elfin in nature, and they match the orange of his torso and legs. Like I said before, I am a big fan of his Mohawk look because, really, what is better than a robotic-looking dude with a Mohawk? But it also adds to his imposing appearance, and if you are dull-witted enough not to notice his giant metal arm, you are not going to miss his robot Mohawk. Man, that is two consecutive First Looks featuring dudes with Mohawks. What a time to be alive.

The primary schtick of Strong Arm is housed in his right upper appendage. He most certainly has a big, strong arm that can easily be used to bash all of the goody-two-shoes of Eternia square in the maw. I guess maybe Strong Arm had an accident or something that required a prosthetic arm (and HEAD!?!), and in true Dark Hemisphere fashion, the attending surgeon decided it would be better if he gave him a weapon, rather than a practical replacement for the limb. Hey, you aren’t going to get any complaints out of me for that. His arm is riveted from the top of the biceps to the wrist, and even though the arm is already enlarged, the fist is also blown out of proportion even to that. I like all of the line details and the giant outer “hinges” at the elbow. His fist is a weapon so don’t expect him to wield an implement in his right hand; he would not be able to do so anyway. You could always give him a ray gun or a sword for his left hand, but judging by his getup, he uses that hand exclusively for doing the dishes.

In a somewhat surprising move, Mattel actually decided to, ahem, extend to us an interchangeable arm as one of Strong Arm’s accessories. At first I was a bit apathetic to the idea since you can really only display one arm at a time, but it is actually cool way to display his powers or an implied “action feature,” and it is always good to have options. The extra arm is literally just an extension of the basic one; it is not really meant to represent a different arm, just the big arm extended out to punch those Heroic Warriors that might otherwise be slightly out of reach. The arms swap out at the bottom of the elbow and the peg is secure, but it is easy to switch them. So have it your way, baby. Finally, Strong Arm comes with another one of those Filmation “artifacts” that we love so well. This time it is the shrink ray used by Evil Lyn (and maybe Skeletor too). It looks spot-on accurate to source and you can give it to anyone and it looks great. Strong Arm can hold it, but you get a better effect with someone that can hold it with both hands. I should mention that I had to use the old hair dryer trick to straighten out the barrel of the ray as it was warped in the packaging.

It is kind of strange to already be closing out the MOTU year in early October, but man, I am so glad that we close with two Filmation characters in Strong Arm and Plundor. I am not going to shut up any time soon in flying my flag for more Filmation characters, so sit tight! We have gotten a lot of the heavy hitters this year (and Scorpia is already revealed for next May), so now is the time to start really mining the shows for those slightly under-appreciated guys — like Evil Seed and General Sunder. Now. Strong Arm turned out to be a pretty solid Filmation figure. I think that I like the Fang Man figure the best among Skeletor’s big three cartoon henchmen, but Strong Arm has a great look to him, and let’s face it, he has been a long time coming. Now, don’t forget about him in December, and remember, he is the final Club FILMATION figure of the year; Plundor is the Club ETERNIA figure. Club Filmation has finished with a pretty strong six figures (debatable, of course), so we need this club to continue in 2014 and 2015. The Evil Warriors are growing stronger and stronger ,and we’re down to just five more characters (that we know Mattel CAN do) to finish it off. So, roll on Two Bad and Blade, and let’s hope we see Saurod, Ninjor, and Twistoid before too long. Oh, and those fancy Robot Knights. Yeah…

*Thanks for checking out our latest run of MOTU First Looks, and thanks to Mattel for providing this sample of Strong Arm for preview. We switch gears to DC next and the final figure of the Club Infinite Earths…