The Evil Dead franchise changed my life — thrice. No joke. The first film’s pervasive mood and relentlessly grim tone blew me away; the fact that something so loathsome and unapologetically corrupt not only existed, but was available on the shelves of my local video store made me look at the world in a whole new way. And while Evil Dead 2 took the first film’s concept and played it for laughs, there was still enough perverse imagery and sheer eye-popping insanity to make it a personal favorite. It became the go-to movie for the wild, chemically-fueled mayhem that occurred every Friday and Saturday night of my late teens. 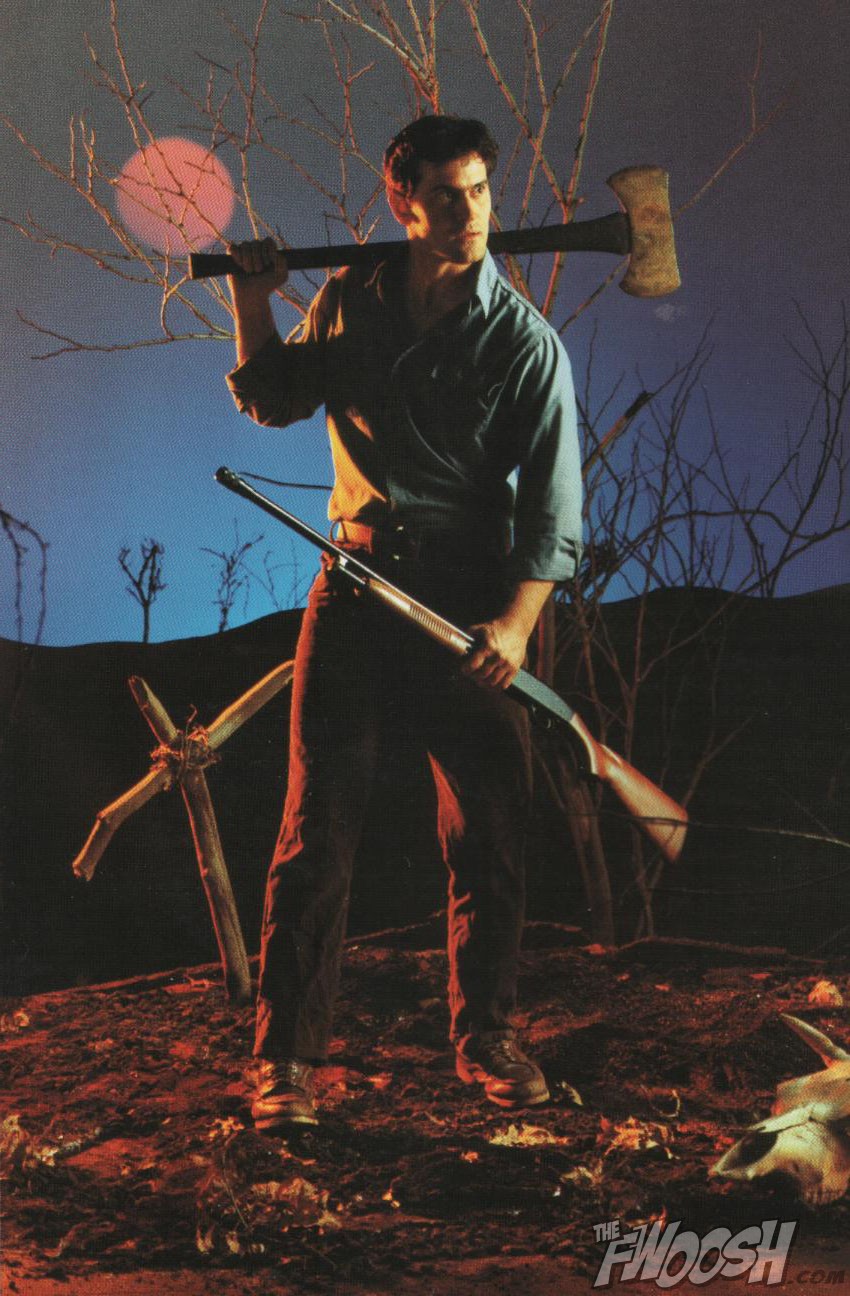 The release of Army of Darkness was the inevitable morning let-down to the non-stop party; the change from horror with comedic overtones to full-blown camp not only turned the franchise into a sad joke, it taught me to expect the worst from any situation. Am I exaggerating? Well, to put it in perspective, Army of Darkness was all three Star Wars prequels rolled into one for me — I’ve never been so disappointed in anything, before or since. 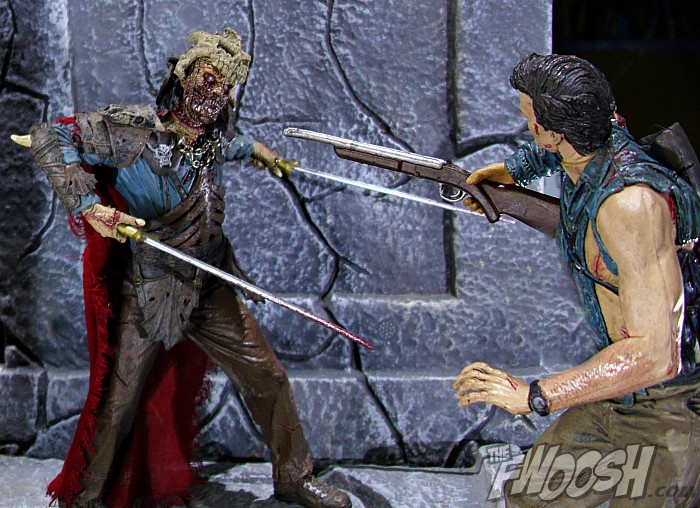 So what does all that have to do with toys, you ask? Well, in 2000 McFarlane Toys gave us the first ever figure of the Evil Dead’s titular hero Ashley “Ash” Williams — and, of course, it was based on ☠@✴ing Army of Darkness. Like pretty much every McFarlane offering, the Ash figure featured an impressively detailed sculpt, striking paintwork, and about as much articulation as a broom. Okay, that’s an exaggeration — you can actually get more poses out of a broom. 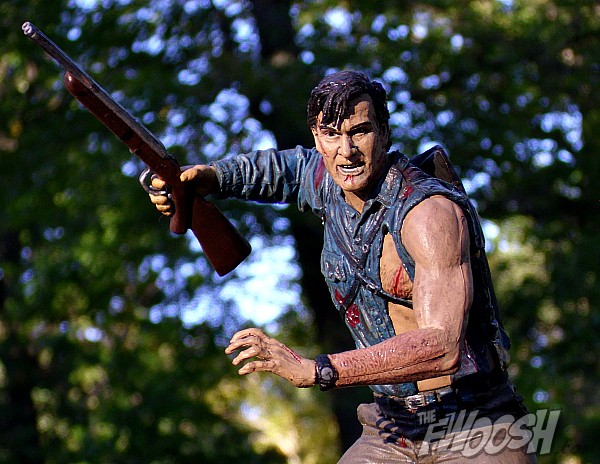 Griping about the lack of articulation in these figures is like complaining about the price of gas or government-mandated health insurance — everyone has already done it and it changes nothing. That said, taking pictures of these toys was a maddening experience; they defy every effort to get a decent pose out of them. Really, all they can do is stand there with their arms awkwardly raised — think 21st century American schoolchildren reciting the Pledge of Allegiance. No, wait, they’re not even that kinetic. Think low-end store window manikins covered in Karo syrup and red food coloring — yeah, like that. 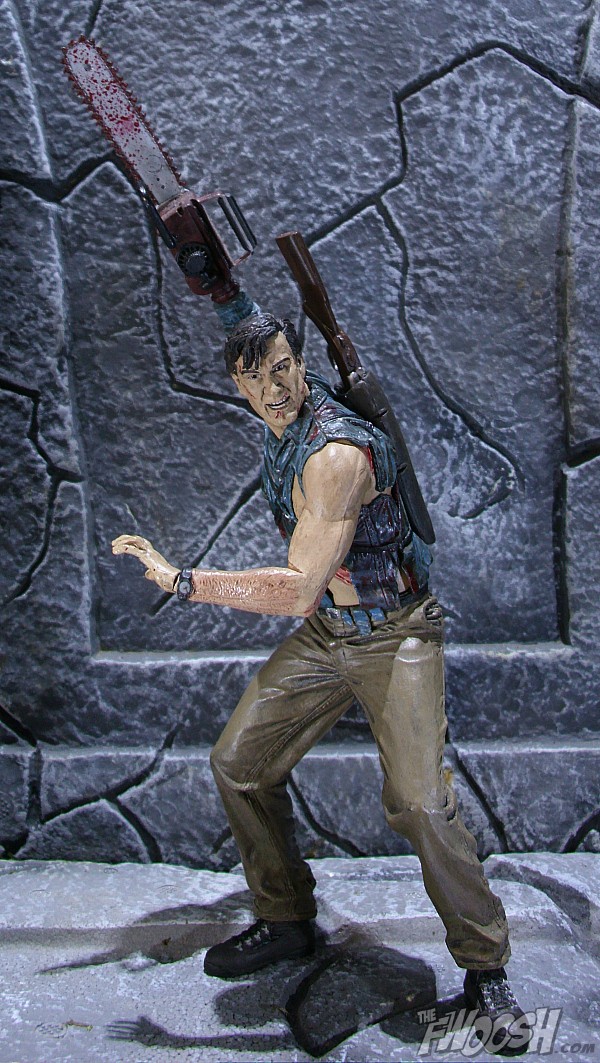 So what’s the deal? Well, this is Ash as he appeared at the beginning of Army of Darkness. He’s sporting his everyman uniform of blue workshirt and brown denim trousers, worse for the wear after his adventures inside the cabin during Evil Dead 2. He’s posed brandishing his trademark chainsaw, but forget Ash doing any more than that — the arm is pegged into the shoulder, which means it can only rotate. With no elbow to speak of, Ash can’t swing his arm forward or back. Thanks to the bizarre construction, he can’t even let it hang at his side. Instead of a kick-ass Deadite-fightin’ warrior we end up someone waiting for their Ban roll-on to dry. Why, Todd? Why? 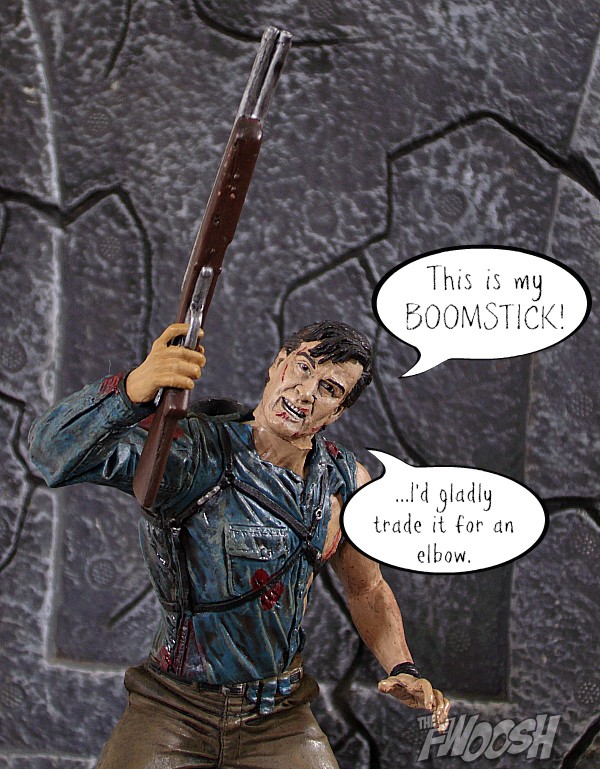 McFarlane always used to make a big deal about “hiding” his action figure’s points of articulation. In his mind it was better to have a limited range of motion with no exposed articulation than for his toys to look like… well, toys. And while I can’t take issue with an individual’s artistic sensibilities, I can grind my gears about the silliness of the practice from a business standpoint. Mcfarlane wasn’t trying to make the best toys possible, he was attempting to impose an aesthetic sensibility on an entire industry. And he would have got away with it, if it wasn’t for those meddling kids! 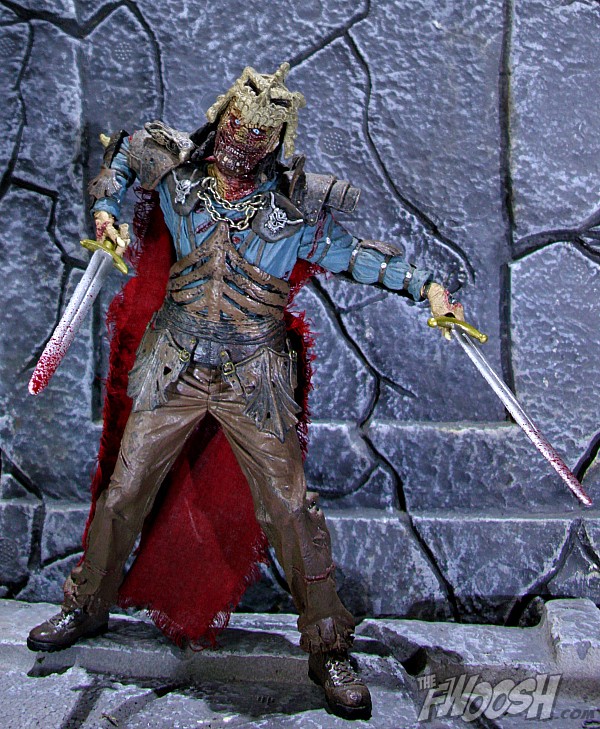 Y’see, McFarlane really wanted everyone to like statues. I guess he felt action figures of weedwacker-wielding sociopaths and pantieless angels were low-brow, so he decided to appeal to a more “high-end” crowd. And what a crowd! I can’t tell you how many parties I attended back in the day where some clueless metal-head drunkenly extolled the virtues of his McFarlane figures: “They don’t need to move! These aren’t toys, they’re collectibles.” Whatever, dude, I’m just here to drink free beer and hit on your girlfriend. 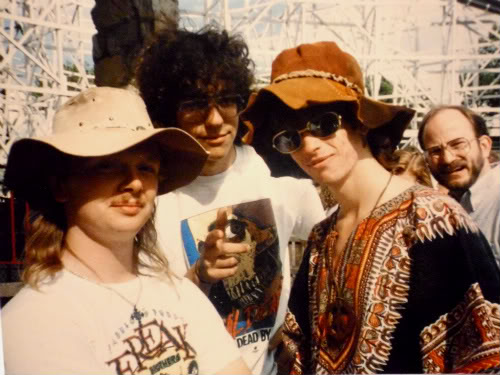 And lest any of you doubt the veracity of my claims, allow me to prove my cred by offering this pic of young Anthill wearing an Evil Dead 2 puff-print tee. You’re welcome.

Anyway, back to the figures. The paintwork is typical of McFarlane product of the time: its decent enough, but an over-reliance on the “messy = realistic” approach is a bit much. The washes can be heavy-handed, especially on Ash; he looks like he wrestled with a package of BIC pens and lost. The dirt and crud are good, but it’s not really enough to matter. Evil Ash is a bit better with some vivid reds and blues present to spice things up a bit. Honestly, he looks more colorful in toy form than in the film, but we can chalk that up to the movie’s murky lighting and the painter’s artistic interpretation. 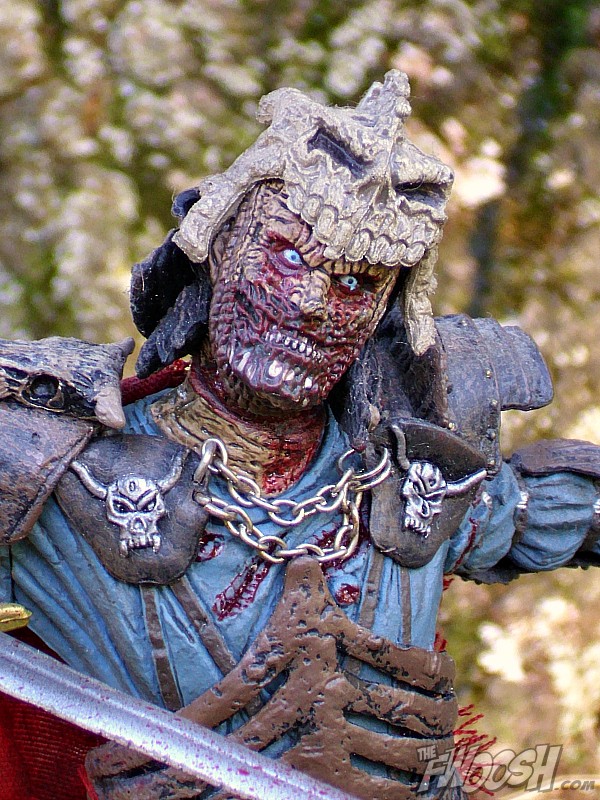 As far as the sculpting goes, it’s pretty much hit or miss. Evil Ash fares better in this category in that he’s at least recognizable: 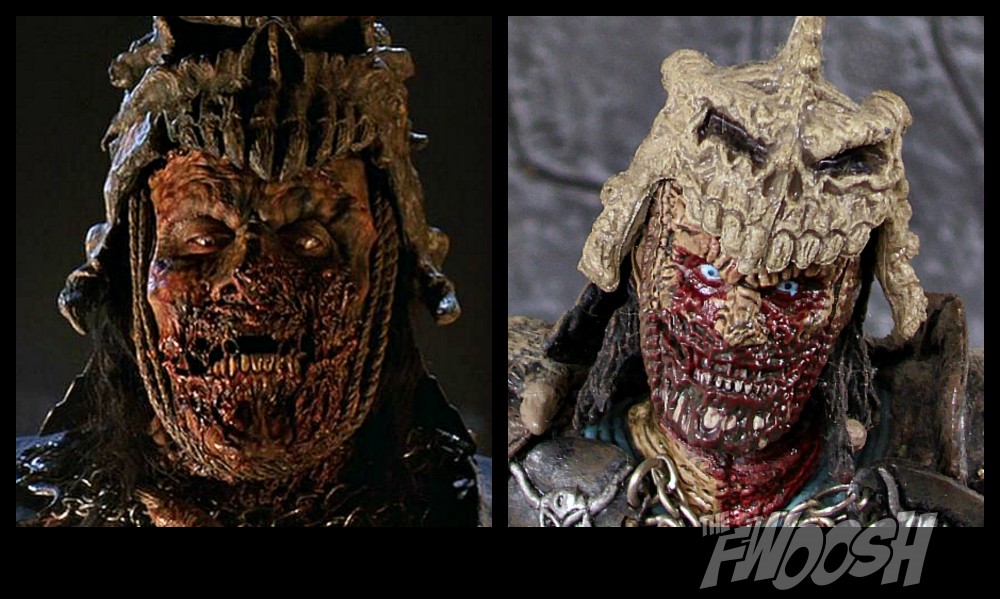 Pretty good, huh? That’s some nice work, especially on the skull helmet. But most sculptors would agree that it’s easier to bash out a monster than nail an actor’s likeness. While either can be a daunting task, a character with a face like chewed beef jerky at least provides a little wriggle room. Still, an actor like Bruce Campbell should be a sculptor’s dream come true: he has strong, clearly defined features that readily lend themselves to a recognizable likeness. And yet… 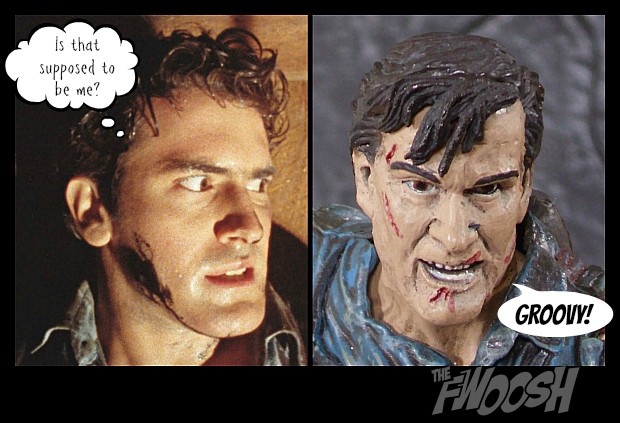 I’m not sure what happened here. Perhaps the sculptor’s hand was possessed by Candarian demons, forcing him to unleash this crappy likeness on the world. I’m thinking the lack of symmetry is the major culprit; one side of the face looks completely different than the other. It takes Bruce Campbell’s notable features makes a mess of ’em. Yeah, the big chin is there, but why is it shaped like that? And since when does he have big ol’ jug-ears? Also, what’s up with the teeth? Ash wasn’t stranded in the 14th century for so long he couldn’t get decent dental care, and yet his upper plate looks like he’s been chewing on rocks. NG, my friends — not good. 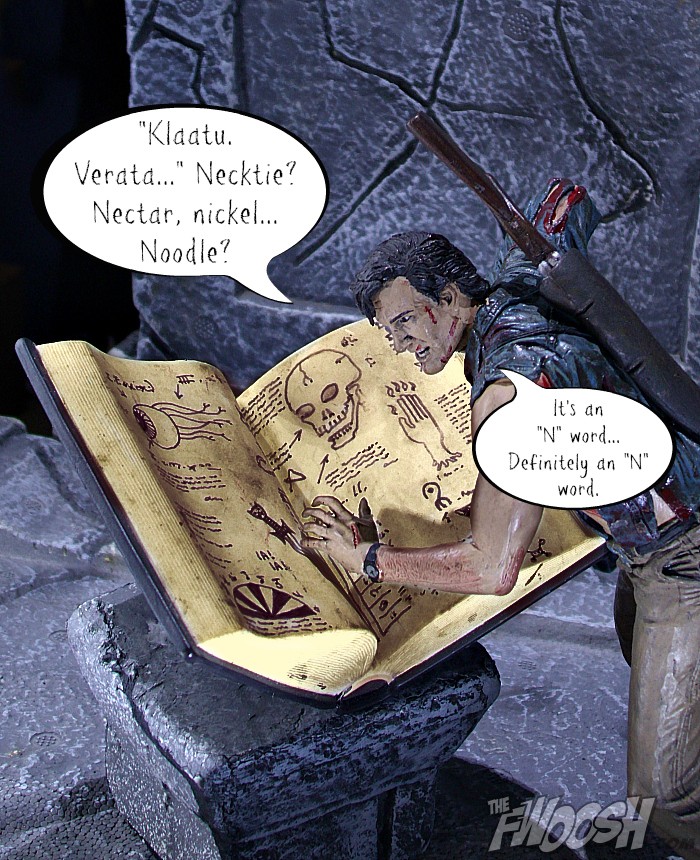 In profile it looks a lot more like Ash, but who poses their figures like that? Its shortcomings like this that kill the joy — for all of the impressively sculpted wrinkles, folds, and scars, if the figure doesn’t look like who it’s supposed to be, then it is a failure. 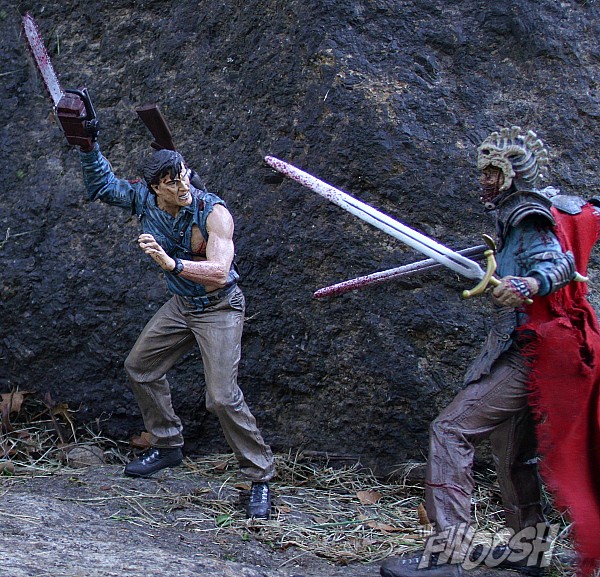 As far as accessories go, both Ash and his evil counterpart get screen-accurate representations of their notable gear from the movie. Ash came with his “boomstick,” his trusty chainsaw, and swappable hands (regular and his “power glove”), while Evil Ash was provided with twin swords. When these two figures were re-released as a set, a mini-Ash with fork and a copy of the Necronomicon was included as well. The weapons look decent, but the plastic used is very brittle, so have a care when posing. 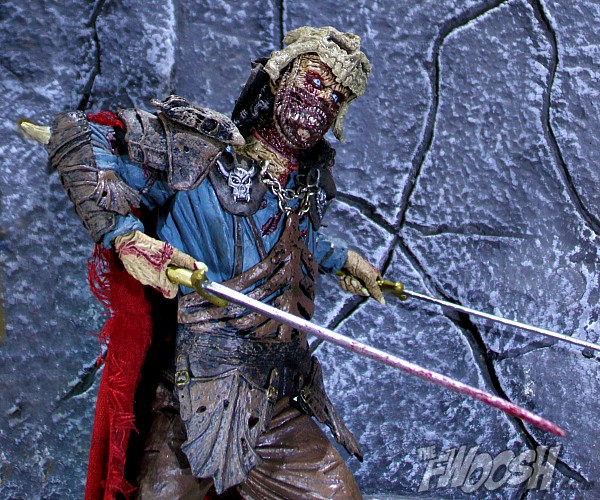 If it seems like I’m beating up on these toys, well… I am. Granted, they’re more than ten years old and a lot has changed in the action figure world since then, but that doesn’t alter the fact these are crap. We know now that articulation can be married to a terrific sculpt and that slathering half a gallon of paint on something does not necessarily make it look more “realistic.” Check out NECA’s recent Raimi-inspired offerings — they dance rings around these figures in every possible way. As it stands, these are lousy toys that line up perfectly with the garbage that was their source material — they are no better than the lousy movie that inspired them, and that’s poetic justice. For me, the only real value they possess is their accessories — Punisher looks pretty boss with the shotgun, and a certain Caped Crusader found a great use for that chainsaw… 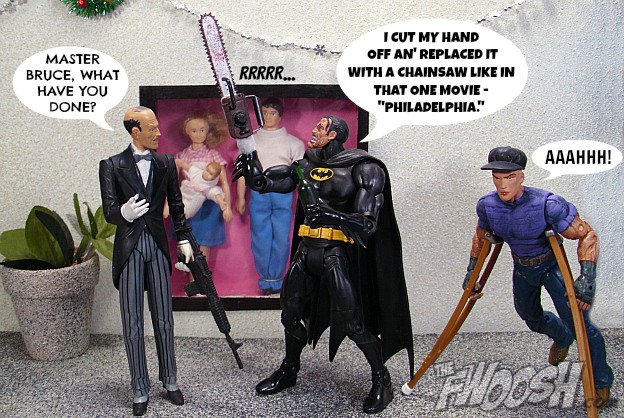 Is the Man in the Anthill a big doo-doo head for trashing your favorite movie? Discuss on the Fwoosh forums! http://thefwoosh.com/forum/