The second TRU exclusive True Legends set I picked up on sale was the Hydra and Hercules pack.  These sets of themed action figure sets appeal to me as I remember playing with random monster, dragon and dinosaur figures when I was a kid that I never really knew where they came from and they weren’t attached to some film or TV license.  They were just random cool toys that you could incorporate into your Joe, MOTU, Star Wars or whatever play time because you actually had imagination!  Let’s take a closer look at these unique 4 inch scale figures.

The set comes with a large Hydra figure, a 4 inch Scale Hercules figure, 3 weapons, chains, a shield and a weird little circular piece of plastic that plugs into the figures’ back.  The instructions show the circular piece is supposed to be a grip point for you to hold the figure and wave his weapons around.  It seems a little pointless to me, but I suppose kids might enjoy that feature.

The weapons are all cast in a silver plastic and have a pretty cheap bendy feel to them.  The weapons fit well in the figure’s hands and look appropriate with him.  The chains are one piece of semi flexible plastic and can be clipped to the figure’s wrists with a little effort.  Hercules unchained.  The shield is the coolest accessory with a sharp sculpt of the gorgon Medusa on the front and a nice two tone paint job.

Like the Orc stuff, the weapons can be used by larger figures as knives or short swords.  The chains will also clip onto larger figures’ wrists as well.

The sculpts of Chap Mei figures, especially their monsters, dinos and animals are what brought me to this party.  The Hydra is packed with excellecnt scale detail, textured horns and spikes and some wicked looking sharp teeth.  The detail is all really sharp and it just looks cool to me.  No soft sculpts here.  The design is fanciful and interesting, bringing some dragon ideas I hadn’t seen before like a semi-transluscent chest cavity.

One note about that chest cavity is that it is made of semi-translucent plastic and there looks to be a battery compartment built into the design that is sealed shut, so I think it was designed to light up at one time.  Perhaps that feature was removed for cost or they are reusing a sculpt that utilized the light-up feature (Chap Mei repurposes stuff all the time for different sets).

The Hercules figure is fine, he looks generically heroic and has a cool war-grimace on his face.  He’s wearing some chest armor and furs, nothing terribly exciting or creative like their Orc designs, but nicely detailed.  Again, the sculpts are super sharp. 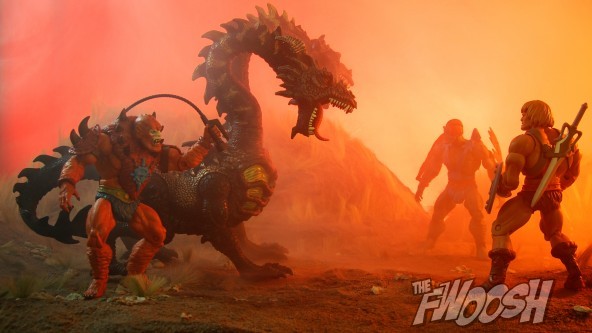 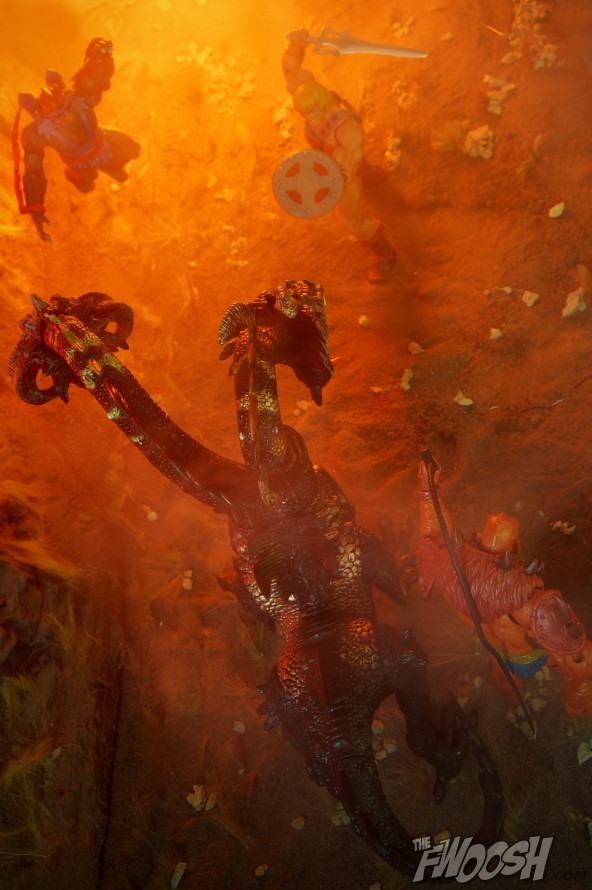 Again with this discount toy stuff, I don’t expect a lot of articulation and the company doesn’t surprise me with much either.  The Hydra has: 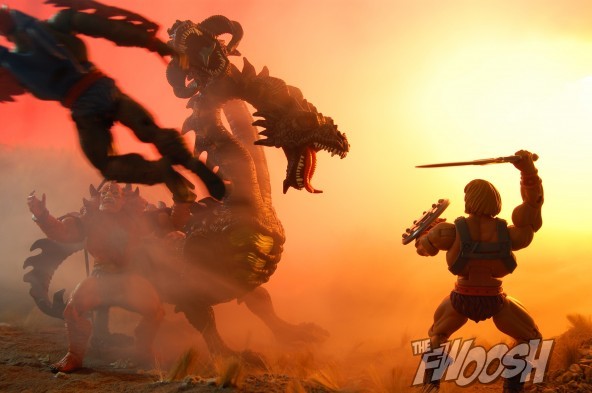 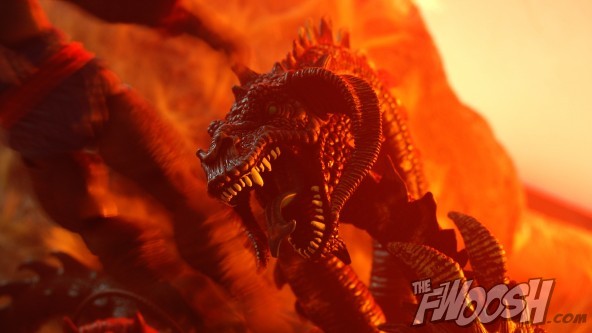 The head has a ball and socket joint, but the range of movement you get is pretty close to a cut joint, there is just a little bit of wiggle room.  The leg cuts don’t do a lot for you since there is no ankle articulation and they are sculpted to be in one position and one position only, but coming off the Orc Wolves I was just glad to see that the legs moved at all. 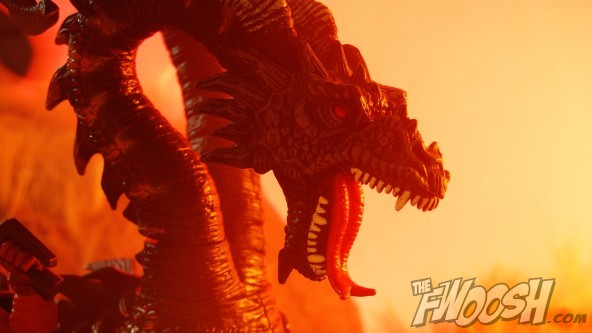 The simple 5 POA toys of my youth seem to be making a comeback lately.  I can’t say I’m onboard with that fully.  Hercules has a somewhat unique arm hinge that I think is supposed to allow kids to swing the arm back and forth in an attacking motion while holding him with the circular key doohicky. 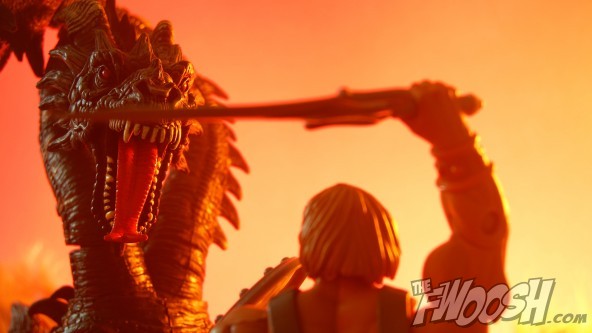 It’s an odd gimmick that marrs the simple beauty of the sculpt with an unnatural looking hinge covering most of the right upper body.  I’m not too fussed about that because I really bought this set as another monster to fight my MOTUC figures. 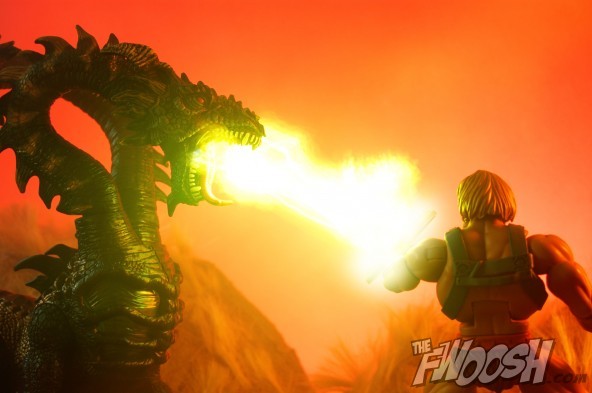 In that respect the Hydra works really well, though the articulation limitations are a little frustrating.  I think  the detail of the sculpt holds up nicely with MOTUC figures. 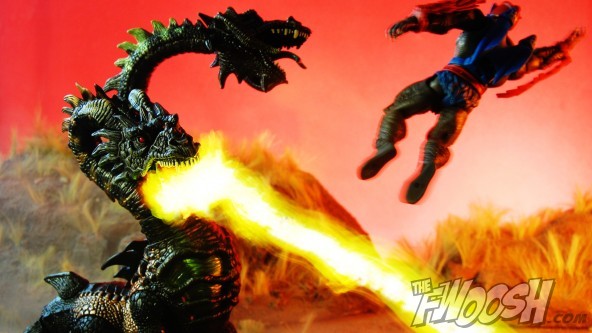 Paint is pretty basic low budget for the most part with very light and somewhat hit or miss applications on Hercules.  The Hydra gets a little more love with a not very subtle drybrush gray over the black plastic of the body and some metallic scale patterns.  A nice touch is that they color the eyes and tongues (glossy paint is used here to slimy effect) differently for each head. 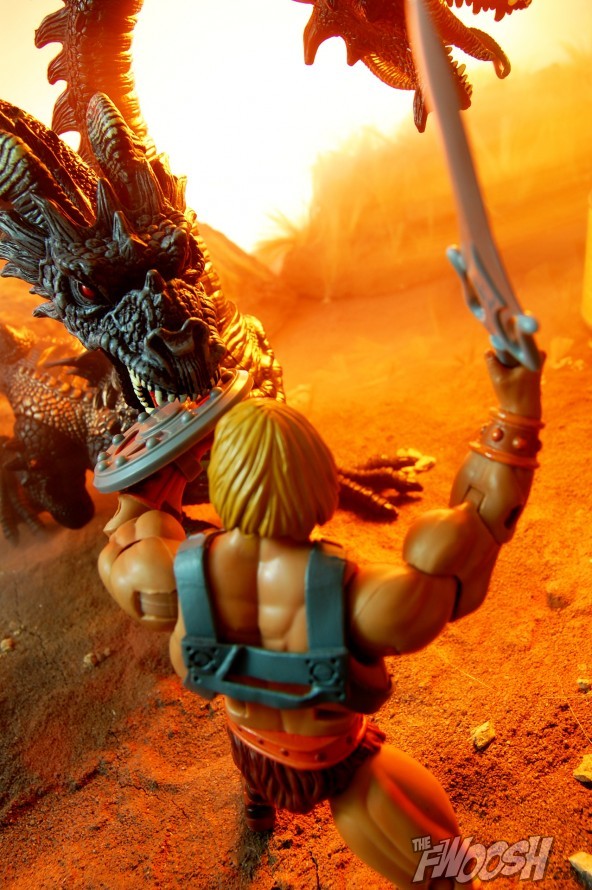 Overall, this is a good hunk of plastic for the 20 dollar price tag and I feel like I got my money’s worth due to the really sharp beautiful monster sculpting on the Hydra.  It looks cool with my MOTU figures and that’s really what I was looking for here. 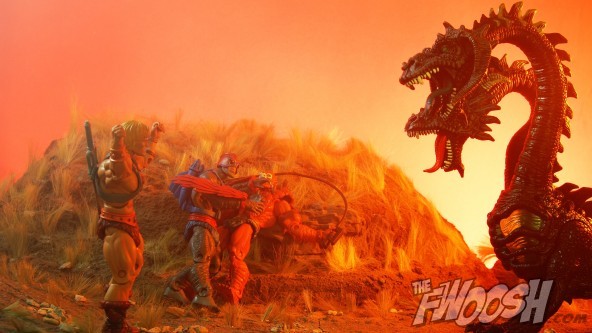 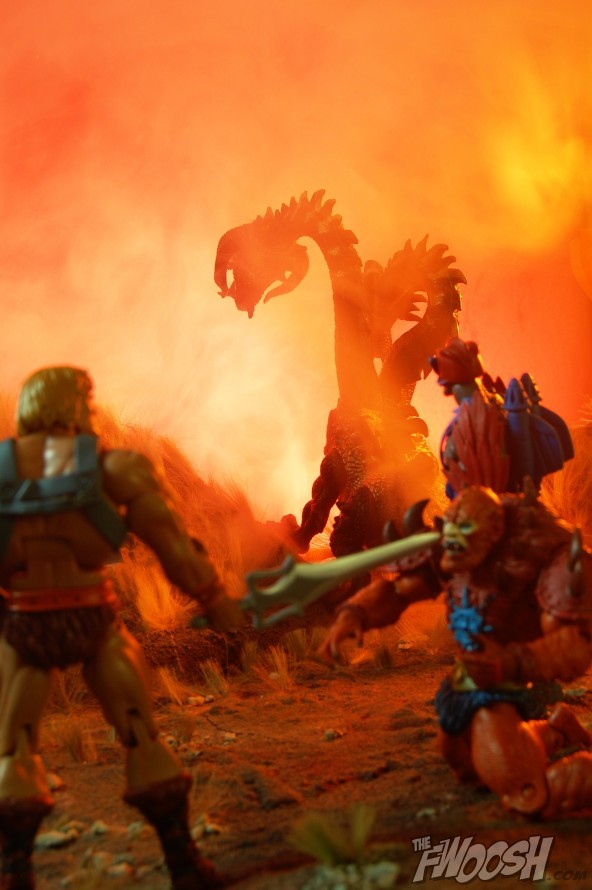