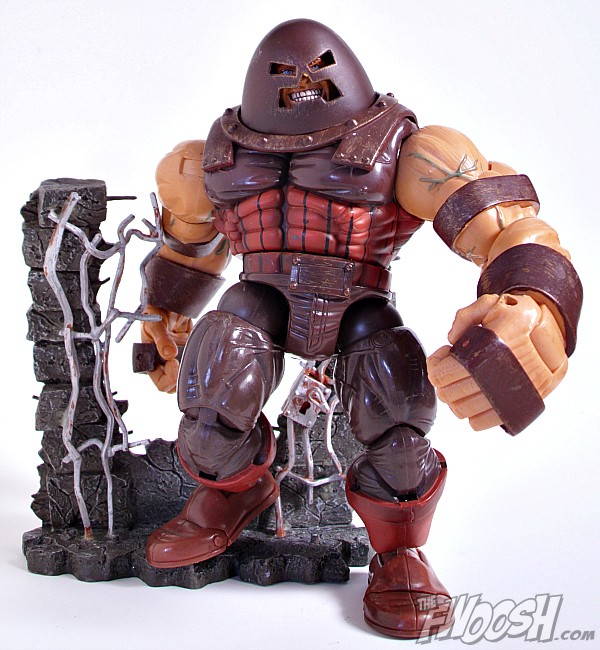 I think we can honestly say that the golden age of action figures in America truly began with Marvel Legends. Before Toy Biz unleashed the line, you were lucky if your action figure had a waist twist. Thanks to Toy Biz, we went from the “Big Five” to more articulation than many figures could actually even use. We’re talking fingers here, people! But it wasn’t just poseability; unlike the countless neon Batman figures the competition vomited up, Toy Biz offered characters in comic-accurate costumes that featured remarkable paintwork. Not only that, the young company wasn’t afraid to “go big” when it came to getting someone’s size right; no undersized Doomsdays here. If you were lucky enough to find Juggy, you ended up with a figure that used as much plastic as everyone else in the wave combined! 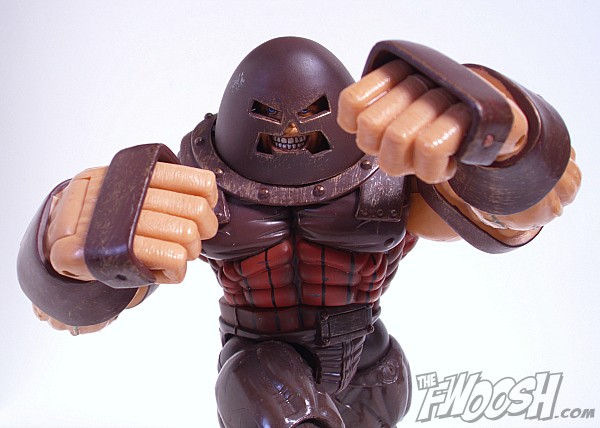 Is bigger better? In this case, absolutely. Juggs was huge in the comics, and Toy Biz saw to it that he was massive in toy form as well. But he wasn’t just big — sculptor Phil Ramirez knocked the ball out of the park, detail-wise. We’ve got bolts, rivets, plates, buckles, seams, wrinkles, and lots of other details that really make the figure pop. Sculpting a toy this big is a huge challenge; due to the figure’s size and design, there’s simply nowhere to hide when it comes to mistakes. Let’s start with the head and work our way down. 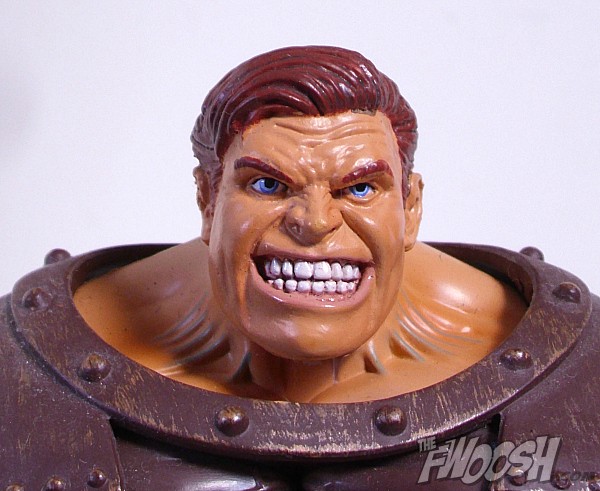 Yikes! There’s a face you wouldn’t want to see coming at you in a dark alley. Juggy appears ready to seriously hurt somebody and he couldn’t be happier about it. It’s a terrific likeness, chock full of character and he looks exactly like I’d expect him to under that helmet.  Speaking of, I remember a bit of Internet griping about said helmet. While more recent figures like the Marvel Universe version have more of a “bowl” shape, this helmet is more ovoid in appearance. Honestly, it never really bothered me. With so much right about this figure, that kind of complaint seems like pickin’ the fly-crap out of the pepper. The bigger issue (MUCH bigger) are dude’s monkey-arms. 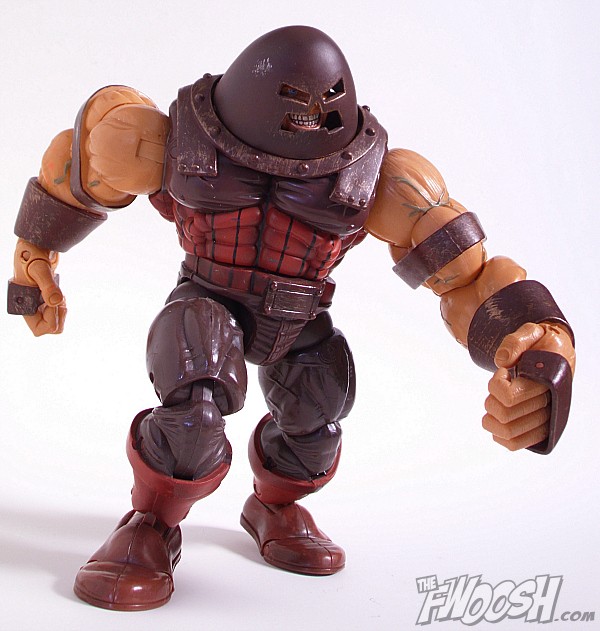 Their length is the clear problem here. Unlike you or me, Juggy’s arms hang just above his kneecaps. Adding articulation to a sculpt is tricky — it also adds length, which can cause a perfectly proportioned limb to track “long.” From what I understand, Juggs was built on the Savage Hulk from Toy Biz’s Hulk Classics line and that figure has the same problem. That also accounts for Juggy’s freakish vascularity. You know — his veins. 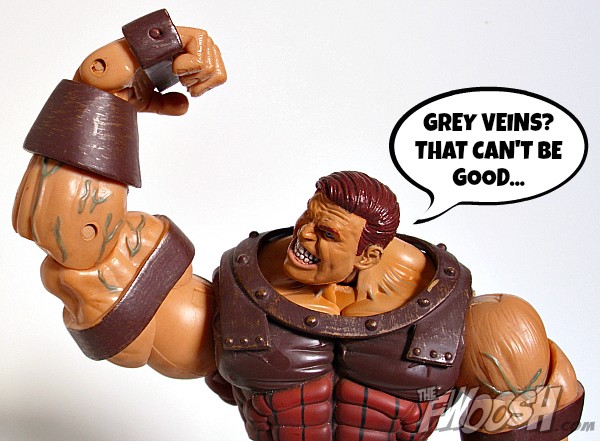 That brings us to paint. Left uncolored, the excess veinage would be acceptable, but the ugly grey paint makes Juggy look like he has worms under his skin. It’s really the only gripe I have — everything else looks okay. Granted, it’s hard to screw up that much unpainted plastic, but hey, credit where credit is due. There’s some nice weathering on the “metal” sections of his costume — this is a guy who spends a lot of time running into stuff and it shows. My figure has a bit of misplaced paint on his abdomen, but I’ve learned to live with it. Hell, I was lucky to find him in the first place! 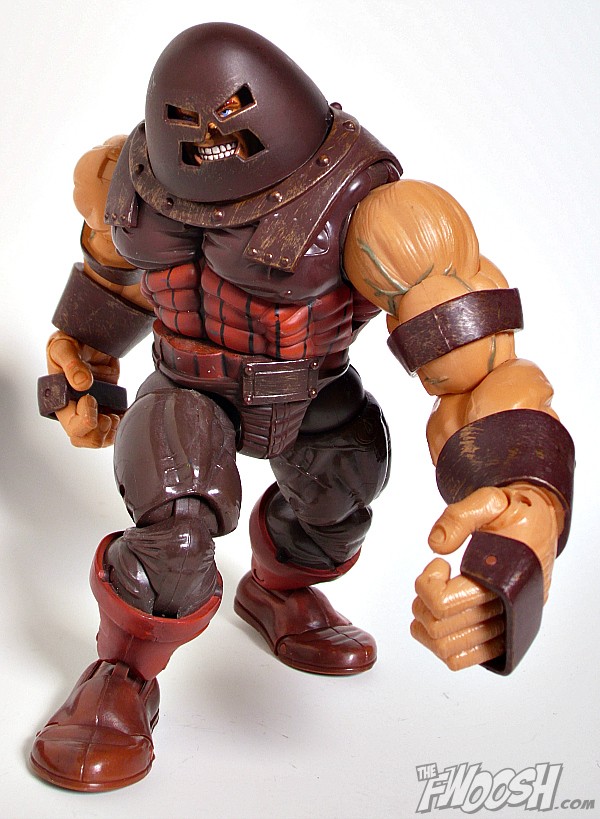 Juggy features the usual “take no prisoners” style articulation we’ve come to expect from Marvel Legends. Instead of a bunch of boring sentences, I’ll break it down for ya pablolobo-style: 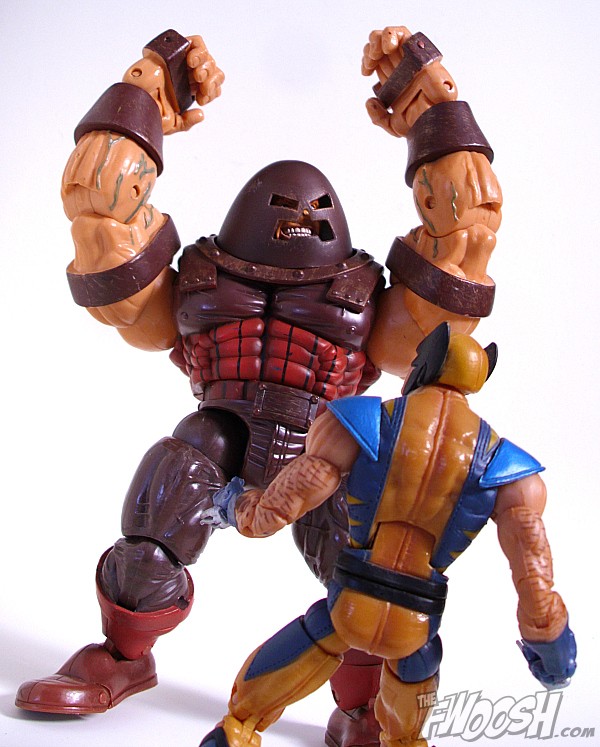 On the accessories front, Juggernaut came with a base first seen with wave-one Hulk. Toy Biz didn’t just re-release the base — they actually added some crumpled gates and a plaque identifying it as Professor Xavier’s School for Gifted Youngsters. Pretty nifty! 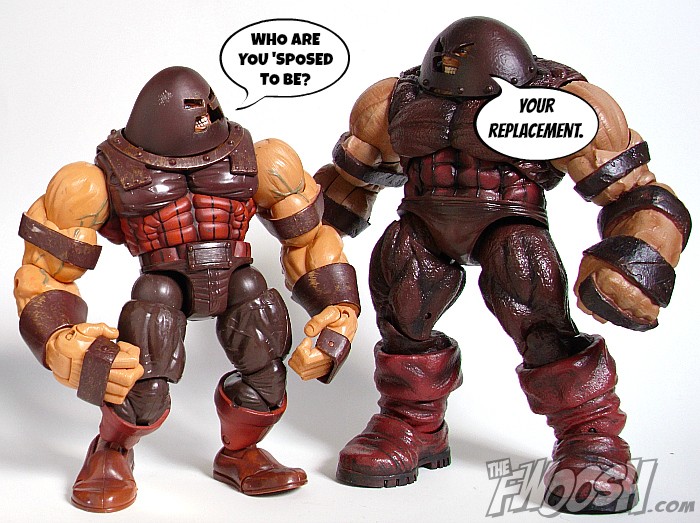 Many collectors have since replaced the Marvel Legends Juggs with the Marvel Select version. As far as scale goes, Select seems too big for me to display alongside 6-inch figures, but it’s such a great figure otherwise, so I’m torn. Well, at least I was — it turns out money is actually rarer than the ML Juggernaut, and I was recently forced to sell my figure off. I wasn’t thrilled about it, but its nice to have a less-expensive option to plug the hole in the display. In spite of his flaws, Marvel Legends Juggernaut is still a remarkable figure and a reminder of those oh-so-recent and yet impossibly distant “good old days.” 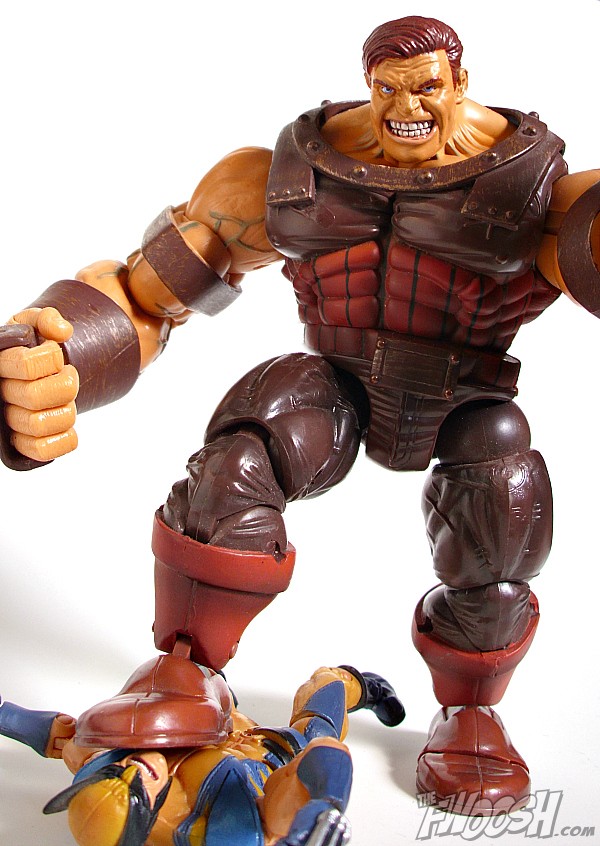