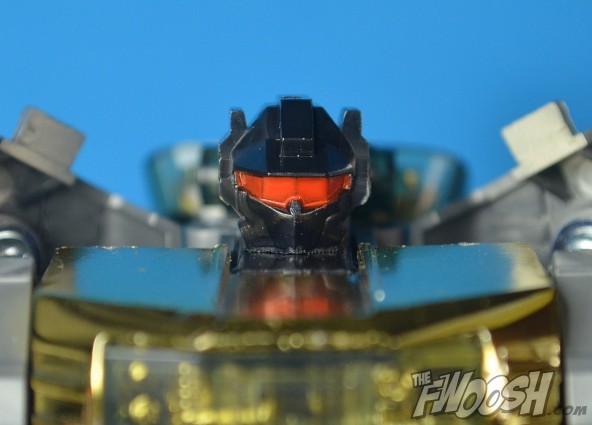 The Dinobots were the thing that sent my Transformers-mania into overdrive back in 1985. The very concept of Autobots that transformed into robotic dinosaurs nearly made my cerebellum fuze when I was introduced to them, and any appearance they made in the comic or cartoon was one I could not get enough of. By the end of ’84 I was already all-in with the Transformers line, but the Dinobots were the thing that really kicked things up a notch and made Transformers my main “post-Star Wars” toy obsession.

Grimlock was by far my favorite of the bunch, and I was foaming at the mouth to get my hands on the toy. A kid at school showed up with him in his backpack one day, and the knowledge that he was out was enough for me to make a break for the bathroom so I could march myself straight to the office to use the phone and call my mom to make plans to scour the city looking for one the second school was over.

Now, what that kid had wasn’t “Grimlock” in the strictest sense. It was the pre-Transformers Diaclone figure that was somehow available across town at a shop called “Toys for Joy.” It was the same exact toy Hasbro would go on to import and name “Grimlock,” but it didn’t come in Transformers packaging and there were a few small design differences. Do you think I cared about any of that? Nope. Because, to quote fair Juliet, ” A Grimlock by any other name would smell freakin’ awesome.” Or something.

The above toy was what I had. The only differences were the blue crotch piece (which I actually preferred, honestly), the chrome sword, and the lack of an Autobot sigil. Exactly NONE of that mattered to me at the time because getting this guy meant I had Grimlock in my hands way ahead of the curve. Unfortunately I no longer own this figure because, well, I needed things to blow up with my M-80s when I was 14. If you and I ever meet in person, promise me you’ll kick my ass for that one. Sigh.

So I never actually owned a legitimate “Grimlock” when I was a kid despite his being my favorite Transformers character. So how did this one come into my possession? 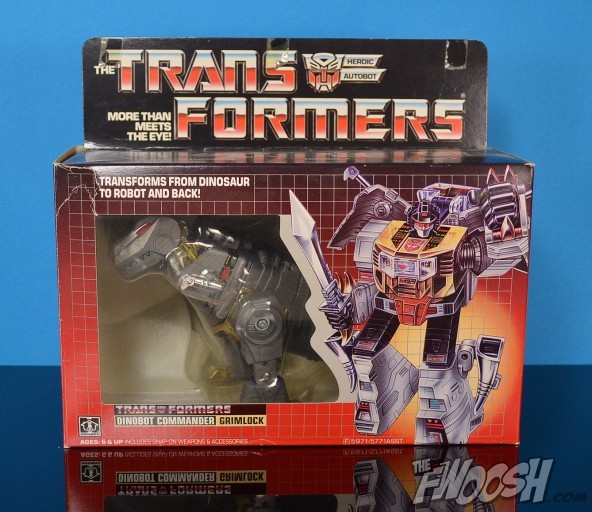 Two years ago, on Christmas morning, I opened a curiously-shaped gift from my wife and was immediately FLOORED. She managed to track down an original G1 Grimlock complete with everything, even the box, insert, catalog, and Omnibots order form. I was stunned. The original Transformers packaging is so beautiful and iconic that seeing it that morning made for one of the more joyful Christmas mornings I’ve had in recent memory. I finally had my official G1 Grimlock. She did good. 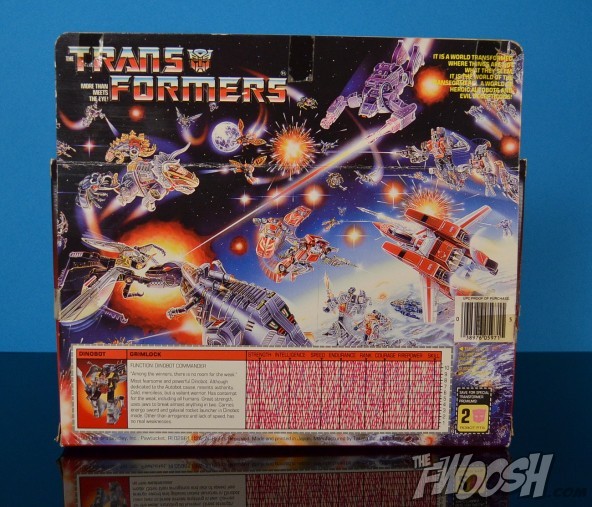 Everything about the original packaging is completely awesome. The battle scene on the back that showcased characters from the current wave was always so cool to pour over, even though it always seemed like the artist didn’t know what was going on because characters would be repeated two, three, four times across the image. I think I count three Grimlocks there alone. 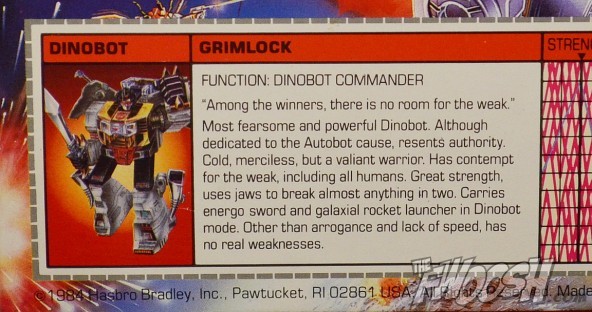 The original tech specs card was always a joy because it provided a pretty good snapshot of the character for those who weren’t familiar with him from any of the popular media at the time. Every kid I knew clipped these out and had a pretty substantial collection of them.

But it was always with the stats that things always got awesome. Included with most Transformers toys was this clear red “tech specs reader” that would reveal secret information about the character when it was placed over the jumbled mess of red lines.

Presto! We get to see what kind of a bad-ass Grimlock was without fear of leaking this information to the Decepticons. It’s such a simple concept, but it was one that was so cool at the time. It was the little touches like this that made Transformers so endearing and important to us.

For a 28-year-old G1 Transformer toy, he mostly holds up, even by today’s toy standards. He isn’t the odd-looking brick many Autobot cars were, and his articulation was really good for its time. Really, the only points of articulation he’s “missing” are some kind of elbow joints. He has them in dino mode, but they’re compromised in his ‘bot mode due to transformation. While he definitely exudes that vintage G1 quality, he’s still a pretty fun figure to pick up and play with.

Grimlock is also one of those few G1 Transformers that looks awesome in either mode. I’ve always been partial to his dino mode because it has much more personality, and it’s the mode that really distinguished him and the other Dinobots from the average Autobot warrior. The cartoons always made the most of his dino mode too, so I’m sure that is coloring my opinion somewhat.

For weapons, he comes packing lots of power, though it always seemed like his jaws were all he ever needed. He’s got his signature sword, his iconic double-barreled blaster, and a second gun with a spring-loaded feature that fired three small missiles. He was one heavily armed dino. 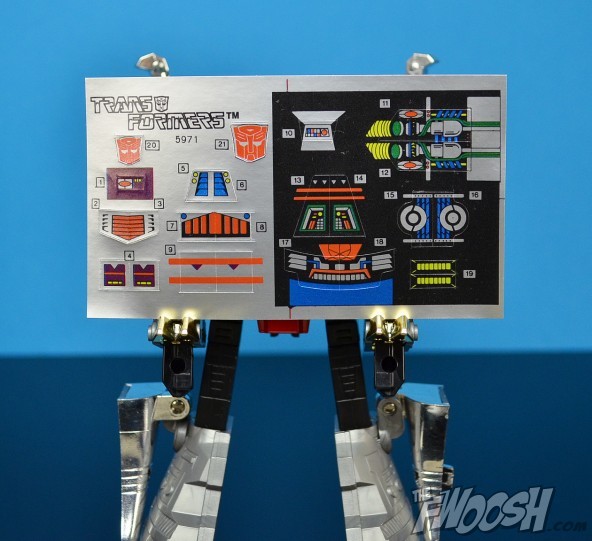 As for the lack of stickers on this guy, this figure came to me without any stickers applied to it at all. In fact, the original sticker sheet was completely untouched (see above). Since this is probably one of the nicer vintage Transformers I’ll ever own, I keep him boxed as one of my focal display pieces, and I like the idea of keeping everything just as it was given to me. I’ve been tempted to get a set of stickers from Reprolabels, but since I keep him in his packaging, it’s been easy to talk myself out of that. 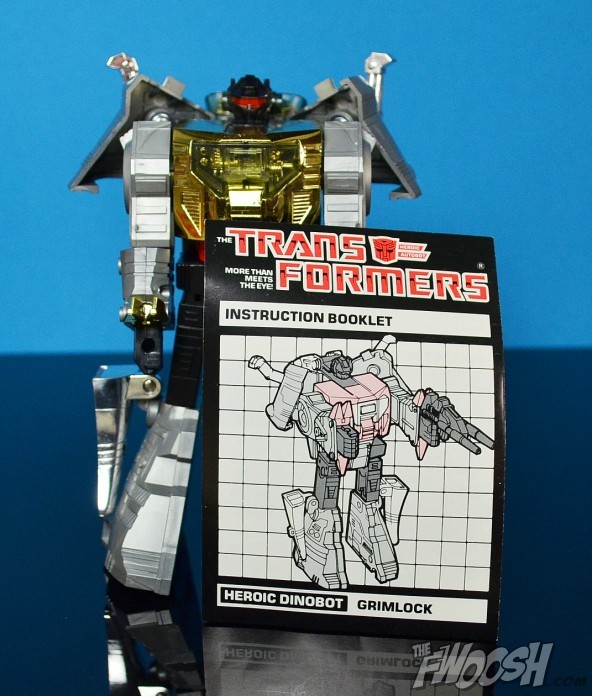 I’m pretty sure the original instruction books were easier to follow than what we get now. Just sayin’. I never had any trouble transforming these toys back in ’84-’85, but these days I often have to consult Youtube. Sheesh.

There have been a lot of updates to Grimlock’s design over the years, but none have ever felt as satisfying as the original G1 figure, and that even goes for the Masterpiece release. The Masterpiece is a thing of beauty, don’t get me wrong, but nothing has ever held the same kind of magic as the original. He’s where it all started, and he’s still the one the others aspire to be, both in terms of effectiveness and in terms of sheer toy-havin’ joy.

Twenty-eight years later, I can still comfortably refer to this as one of my top-five favorite toys of all time. And even just busting him out to take these pictures made me so happy just because it gave me a chance to play with a G1 Grimlock again. Holding him in my hands still gave me that rush of insane joy I had the first time I opened my Diaclone figure. That is the mark of a truly great toy, I think.

If you don’t presently own a G1 Grimlock and would like one, eBay or your local vintage toy shops are likely your only hope. You could even get lucky and find one at a flea market if you have access to them. He’s a toy that is absolutely worth owning, especially if you’re a Transformers fan and never had one as a kid.