Here’s a story many of you may not like. 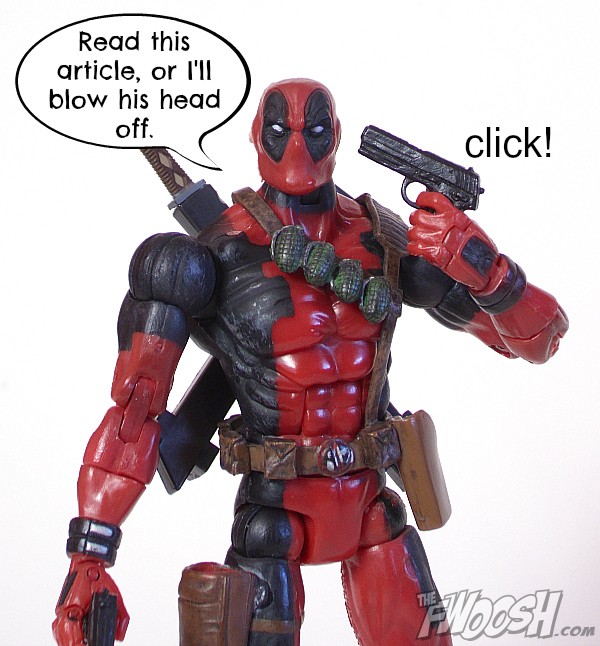 I’ve never been a fan of Deadpool. To me, he always seemed like the poster child for everything wrong with comics in the 1990s. Yeah, I know the character has grown and developed since then, but his jokey mannerisms and nigh-unkillable nature still leave me cold. So why do I have an action figure of the guy? Good question. 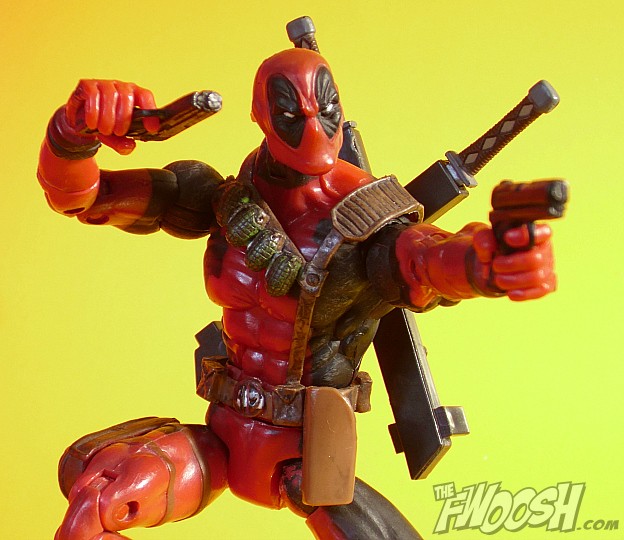 Deadpool came to us in wave six of Marvel Legends. At the time the line was suffering distribution problems, and many collectors never saw these figures in stores; bracketed between the shelf-warming wave 5 and the coming-in-hot wave 7, wave 6 was kind of lost in the shuffle. The only figure I ever saw on the shelf was the Thomas Jane Punisher, which was pretty damn frustrating. I was happy with the Punisher I already had — I wanted Juggernaut, Phoenix and Wolverine in his brown costume. I haunted my local Walmart like a ghost, scaring children out of the toy section with my long wispy beard and crooked walking stick, but somehow I always missed the figures I was looking for. 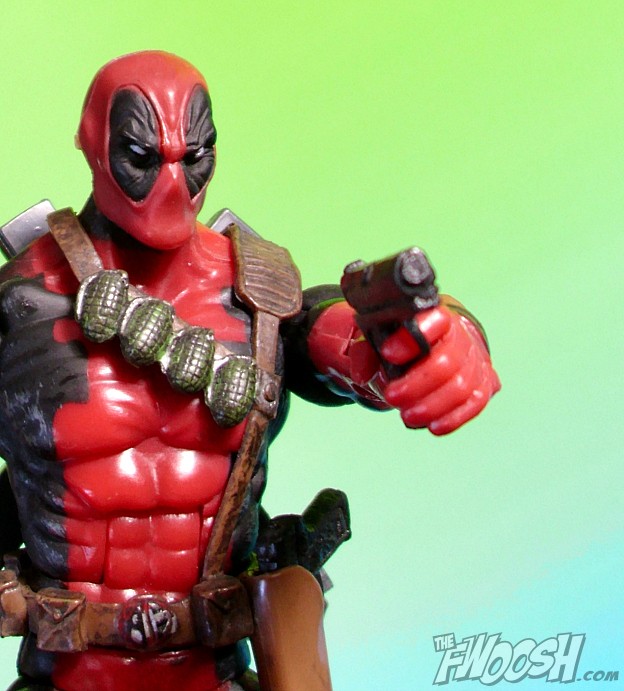 Flash forward six months later. I was hanging out with some friends who worked at a local “pop culture” store. Every month or so we’d get together, drink a few beers, and talk toys. There was a nice variety to our little group: one guy was into classic monster stuff, another was into 3 3/4-scale figures, and I was the Marvel Legends guy. Dave (the 3 3/4-inch collector) showed up one night with a big box of stuff he thought I would want (for a few bucks, of course!)

Dave started collecting Marvel Legends but had quickly lost interest — he just didn’t dig the 6-inch scale. In the box were figures like movie Daredevil, the first Sub Mariner, and Magneto (all figures I already owned); however, underneath all of the schwag was hiding the brown-costumed Wolverine, Cable, and Deadpool! Dave quickly snatched Wolverine from my hands, telling me “I don’t mean to throw him in there!” I hustled, I haggled, I offered real cash, but Dave wouldn’t budge. In the end I gave him $5 and walked out of there with Deadpool. Sigh. 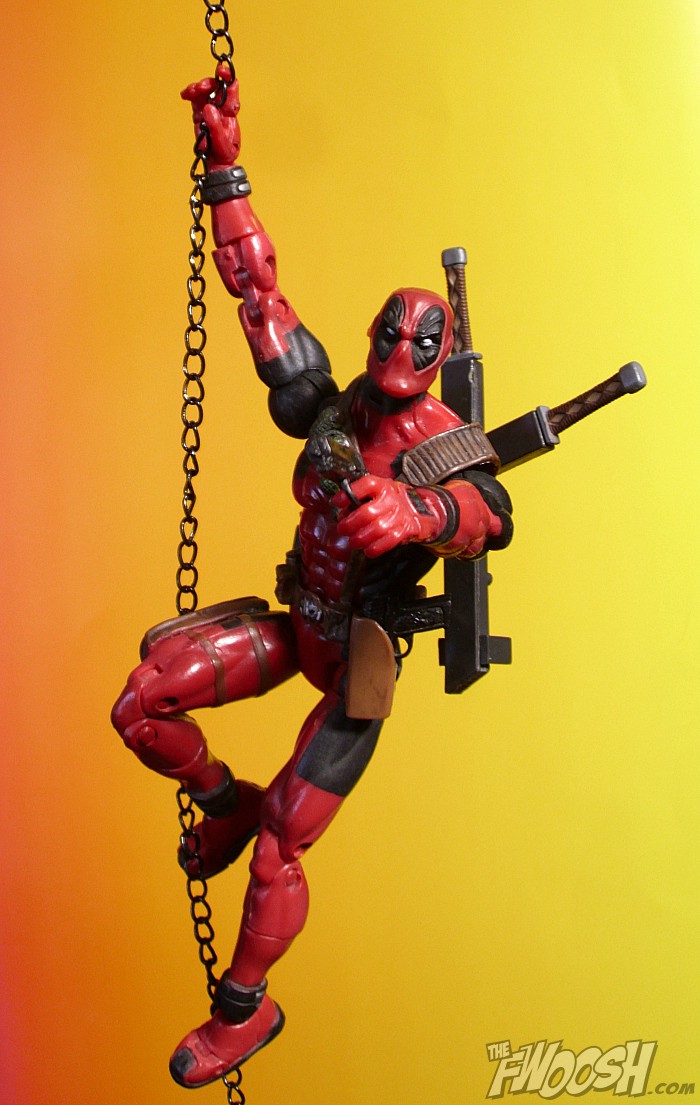 At the time I knew the figure was desirable, but I couldn’t muster much enthusiasm for him. Yeah, he posed nicely and the weapons were cool, but I still would have rather had Wolverine. If you’ve read my articles before, you know I’m not a huge fan of Logan either, but I really like having a wide variety of characters on display. Also, the fact he was short seemed to make him a much better fit than wave 3 Wolvie, a figure I love but freely admit is too big. Anyway, Deadpool was my consolation prize — little did I realize he’d soon be worth enough to buy ten brown Wolverines. 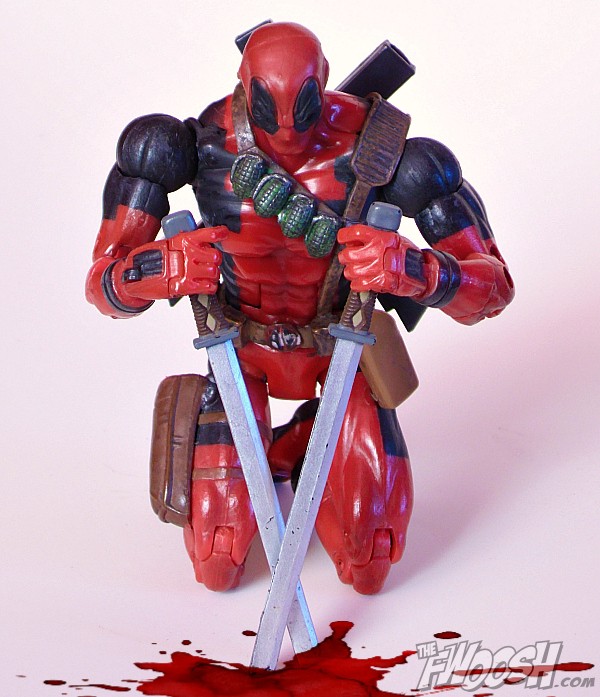 DP hung out with my other figures for years, but I never warmed up to him. Thanks to his loose ankles, he was constantly taking dives off the shelf: every time I heard that familiar THUNK, I was sure I was going to find him broken on the floor. Thanks to his healing factor, he survived, but just having him around became a nerve-wracking experience. I didn’t want the figure to be ruined, so I eventually put him away. 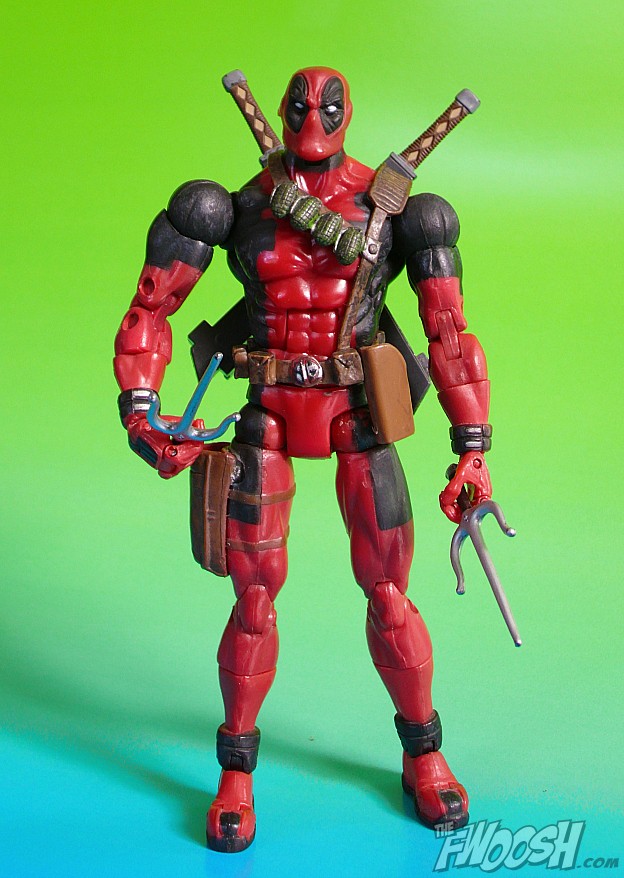 I knew the birth of my daughter would affect my toy collecting, but I never realized how much. I thought building an army of HYDRA or SHIELD agents was expensive, but it’s nothing compared to the cost of diapers, clothing, food, and a thousand and one other things babies need. Obviously, my action figure budget took the first hit — I went from dropping hundreds a month on entire waves to cherry-picking the figures I absolutely had to have, and then hoping I could find the rest when my wallet allowed it. I seriously began eying Deadpool as a quick way of making a few bucks, but I resisted. I just could not bring myself to start selling my collection, no matter what was in it. 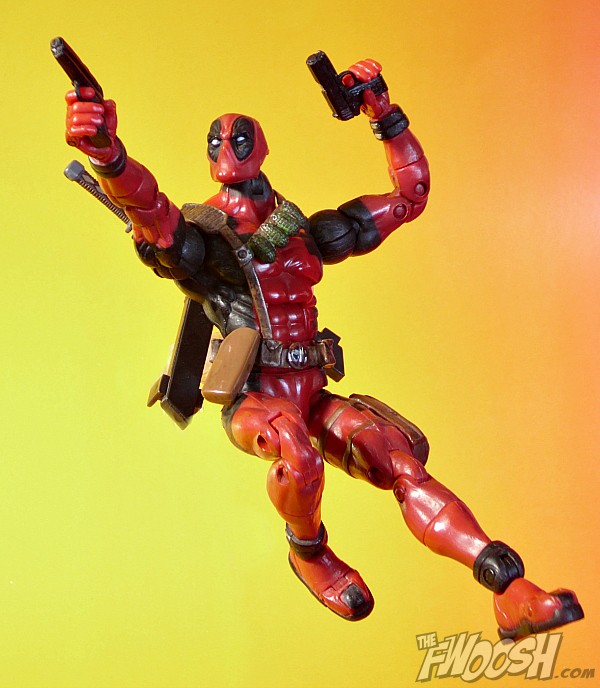 Time passed and Hasbro issued their own Deadpool. I thought that the original would drop in price once the new figures appeared, but the Merc with a Mouth is so freakin’ popular his going rate actually increased. Fans weren’t happy with the new diminutive ‘Pool and still wanted the Toy Biz version. Several re-releases later and a carded wave 6 figure can still easily bring $100+. I knew it was time. I posted him on a popular auction site last night and, wouldn’t you know it, he had already sold by the time I woke up this morning. 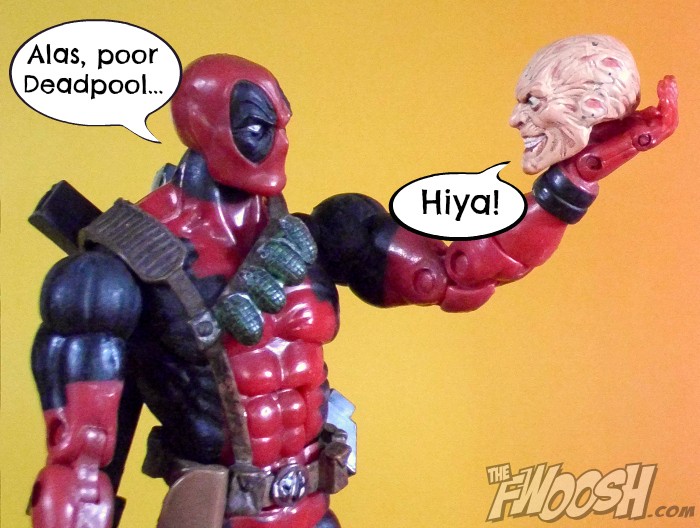 So here I am, Deadpool-free and okay with it. Like I said, I was never really a fan. I’m happy with the amount I got for the little bugger, and my buyer is over the moon at finally getting a figure he’s wanted for years. Am I a rotten scalper for profiting from a figure I paid five bucks for? Perhaps. Am I a dick for not selling it to one of you guys for cheap? Maybe. But in the end, you have to do what’s right for you and yours. Hey, if it were up to me, everyone who wanted Deadpool would have one — but I’m not a toy manufacturer. I’m just a stay-at-home dad who got lucky and who’s doing what he has to do to keep the wolves from the door. And if this story bothers you, be here next time when I tell you about the time I bought a wave 6 Juggernaut for $1.50…