SDCC is always a big time for Masters of the Universe Classics reveals; however, where other toy lines linger in a depressing limbo of anti-news in the months after the huge SDCC onslaught, MOTUC has been fortunate the past several years to have the Power-Con, a specialty convention for the fans of Masters of the Universe, that gives us a second wind of brand new, never-before-seen character reveals that provides a re-invigorating jolt of excitement.

Some non-visual news first: subscriptions will be reopened from September 20 through the 24th, so if you haven’t subscribed yet, then here’s your chance. You don’t want to miss out on what will be a fantastic year of figures.

They’ve apparently decided to release a pack of 200x heads for those of you philistines unhappy with the vintage heads. Apparently it’s a 6-head pack, heads yet to be determined. This news does nothing for me since I think the vintage heads are the bee’s knees, but many have complained about it, so good for them.

Now, on to the figures. The 2013 Power-Con pulled out a pair of hotly desired figures and one beast that has been met with a bit less enthusiasm.

Let’s start with the least and work our way up to the best. These are my rankings; I’m sure others may differ with mine, but right now I… oh yeah, I’m about to say it… have the power, so you’ll have to deal with it. 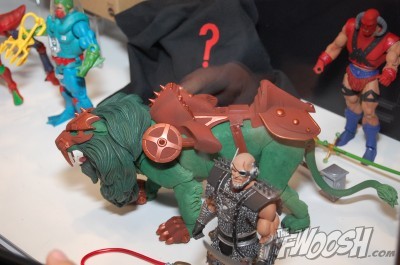 King Grayskull was the very first figure in the Masters of the Universe classics line, debuting as an SDCC exclusive way back in 2008. He later appeared as a regular monthly figure and has held a very lonely vigil without either Queen nor his pimped out pre-Battle Cat. Well, a man’s got to have ride, so Battle Lion will be joining his master as the second-quarter beast of 2014.

From all appearances, he looks great, so there’s no issue there. Being based on the Battle Cat body means he’s going to come in a little small, though. From what the 200x cartoon seemed to suggest, Battle Lion should be noticeably larger than Battle Cat, much like regular lions can’t fit inside a teacup with a clever caption underneath.

Underneath his armored head, Battle Lion appears to have a great face sculpt from what can be seen, with a huge, well-sculpted mane of hair.

Like many reactions I’ve read, I’m fairly apathetic to it. I have nothing personally against it, and I’m sure my tune will change once I’ve got King Grayskull sitting on top of his kitty, but there are a lot of more interesting beasts I’d like to see in a line full of unique creatures. Maybe it’s that he pales in relation to the other reveals, or maybe my heart just belongs to Battle Cat and Panthor too much to really have too much passion for yet another big kitty. I won’t be sad to get him, but as it is he’s going to be filling a slot and not much else. But with the relatively low tooling involved, I can totally see why he was made, and as I said, once he’s together with his King it will probably elicit more enthusiasm. But for now… on to much more excitement with reveal number two. 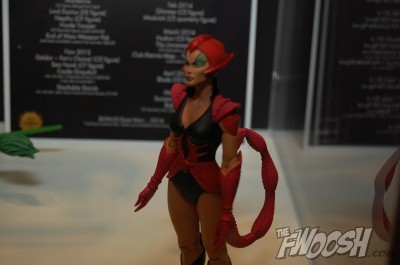 Man, I’d hate to be a scorpion. They’re never the good guy. Talk about racial profiling: Scorpia, Scorponok, Spider-Man’s The Scorpion… they’re never going to be saving the day.

Scorpia receives her debut figure, having been one of the characters on the She-ra cartoon who, like Shadow Weaver, was never immortalized in plastic back in the ’80s. While the male Horde members anchored their slots in the vintage Masters of the Universe line, and the female characters rooted their hair in the Princess of Power line, combs and all, there was just no place for a chick with a scorpion tail and pincers for hands. But it’s a new world, a new line, and Scorpia finally gets a chance to shine.

Visually, she looks great. Red and black. You can not go wrong with red and black. Ever. With those haughty arched eyebrows and that overabundance of green eye shadow, you can almost hear her rasping, dull-throated voice that sounds more like a chain-smoking female wrestler than a Scorpion lady. Most disturbing female voice ever. From a pure sculpting standpoint, just look at all those nodes and bumps in the textured armor and tail. The 4H must be the most patient people in the universe to pile on the amount of crazy detail they inject into these figures. And Scorpia doesn’t even win the award for “most detailed Power-con reveal.”

My one complaint would be her tail, and it’s the same complaint I had for Whiplash. It appears that it has very limited articulation points, much like Whiplash. Maybe my hopes of a ball-jointed, super-articulated tail are unrealistic, but in characters whose method of attack lies in their tail, I want as much articulation to be packed in as possible. I was disappointed by Whiplash’s minimal tail articulation, and I would have preferred a noticeably higher and more advanced level of articulation for Scorpia’s tail here also. I know it can be done, so I have to assume budgetary/tooling reasons, and not capability reasons. It’s a small complaint in a toy that looks as great as this one does, but in a Cadillac line of premium prices, you can’t help but want the toy to do everything you want it to do.

A strong figure for the second spot means that the top spot has to go to a figure even stronger, and there’s only one man who could pull that off. 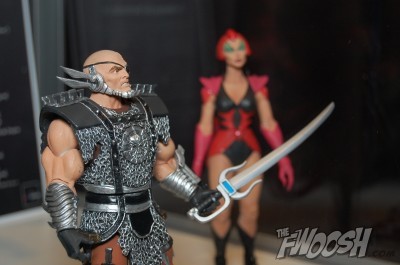 Oh hells yes. Blade. Finally, they’re mining the Masters of the Universe movie. I am in what may be a minority in loving that movie. Yes, it was mostly on Earth; yes, it was low budget; and, yes, Dolph Lundgren was fairly mono-syllabic (despite having a Master’s in chemical engineering and receiving a Fulbright scholarship to MIT ). This movie gets condemned unrightfully so for being cheesy, corny, dated, and all the other slings and arrows that people can muster, but seriously: watch it again. And again. And again. Keep watching it until it sinks in. There was a gritty honesty in its portrayal of good versus evil. with obvious influences from Star Wars and Jack Kirby’s Fourth World, this movie is just pure damn fun, and there was no better character to come out of that crazy ride of a movie than the dual sword slinging, mail-wearing, eye-patched bad-ass that was Blade. While Beast Man was the only one of Skeletor’s main henchmen to get a role in the movie, the ones that were created for it (and no doubt for the toy aisle) were as toyetic as they come. Anthony de Longis imbued Blade with utter contempt for He-Man, and their sword duel was one of the highlights of the movie. To a kid like me, where the violence level in the cartoons was always disappointingly tame, to have a movie that actually existed in a dark and violent world was huge.

I eagerly grabbed Blade’s action figure in the ‘80s, and he and He-Man clanged swords often. Now MOTUC is providing a brand-new version, and he’s the most insanely detailed figure to come out in quite a while. Dig that mail, those sculpted knives, that fierce expression — he’s replete with crazy details. This isn’t just a figure for MOTUC. This is a figure every self-respecting toy fan should have on their shelves regardless of where their interest lies. He comes with a movie sword, a pair of his original toy swords, and a laser whip. Yeah, that’s how bad-ass he is. Most people would whip a chained He-Man with a regular whip. Not Blade. No, this dude isn’t happy unless he’s scorching your bronzed and toned back with frickin’ lasers.

If there’s any figure I would have wanted the Horsemen to go absolutely nuts on, it was this one, and they did not disappoint. This is one of those figures that kicks is all up a notch. Hyperbolic? maybe so, but they nailed the crap out of him, and April of 2014 (when Blade will be released) now seems utterly too far away. The first live-action movie figure, but let’s hope it’s not the last because I’ll have a Saurod-shaped hole that needs filling once Blade is in the collection.

So Blade-Con was a shimmering success to me. What? oh, right right right… Power-Con. Yeah. Is it April yet? Soon, soon.

Oh, this line; you just want to hug it.

Thanks to Matthew K for the pictures, see more of his coverage on Power-Con here