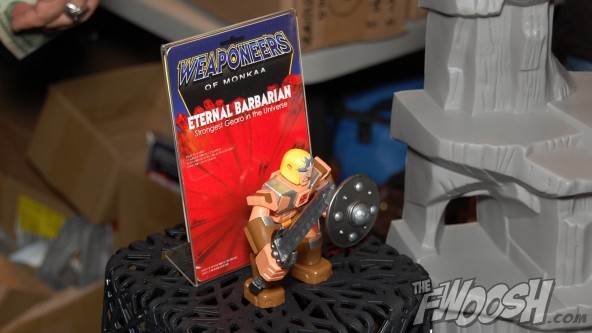 One of my first stops at Power-Con was SpyMonkey Creations.  They always have a cool display at Power-Con and this year was no exception.  They were showing off their brand new Weaponeers of Monkaa releases including a new green Gholem action figure and Masters of the Universe tribute figure in their Monkaa style.  They also had a bunch of cool customs and showed off how figures from many lines can utilize their weapon sets.

Sharing booth space with Spy Monkey were two excellent independent toy makers, Alvis Underground and Working Class Villains.  Villains had their Crystar tribute figure, The Prince of Crystal, that they are producing under their Backyard Legends banner on display and I was blown away by how beautiful it was.  They also had a prototype sculpt for a Magma based figure that also looked fantastic and were selling their custom made Castle Grayskull Dungeon grate sculpts.

Also on display at the Spy Monkey booth was Pop Culture Shock’s Filmation He-Man and Orko statue.  This thing is MASSIVE and perfectly captures the Filmation feel.

Alvis Underground had some full customs on display of MOTUC style custom figures inspired by Frazetta and Dungeons and Dragons, but he sold them so quickly that I could barely get a good shot!  He also had these cool kits you could buy to convert one of your MOTUC figures into a completely new figure with just the addition of a few parts and weapons.  I love this concept and hope to see more of this kind of third party add-ons in the future.  It just expands the world and makes collecting more fun.