The Four Horsemen showed off an amazing Battle Ram prototype at San Diego Comic-Con a few years ago, and we finally have part of that amazing sculpt available in the form of the Jet Sled that comes with Sky High, the Wind Raider pilot.  Let’s take a look at this cool new set! 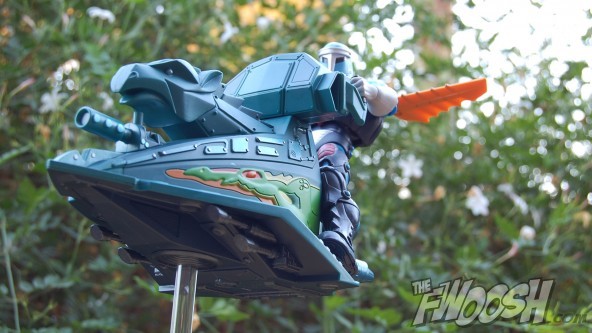 A former palace guard serving under Teela®, Darid was best known as an ace test pilot, working alongside Duncan™ to put his latest inventions to the test. Daring to push the limit on almost any vehicle, Darid earned the nick name “Sky High” and helped Duncan’s team to upgrade the Wind Raider™ and Jet Sled™ for faster acceleration and smoother landings. During the Second Ultimate Battleground he led a squadron of Blaster Hawks into battle combating the Horde Boa Jets and King Hssss’ new Snake Strike Squad. As cocky as he is brave, Sky High defends Eternos from aerial attacks. 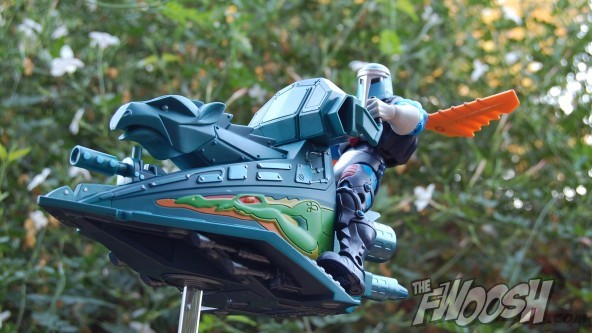 Sky-High is based on the pilot of the Wind-Raider that is seen only on the very cool vintage poster that showed off all the cool MOTU products.  Everything else in that poster was available for purchase, so, of course, the one guy who wasn’t ever available has been a topic of discussion for fans. 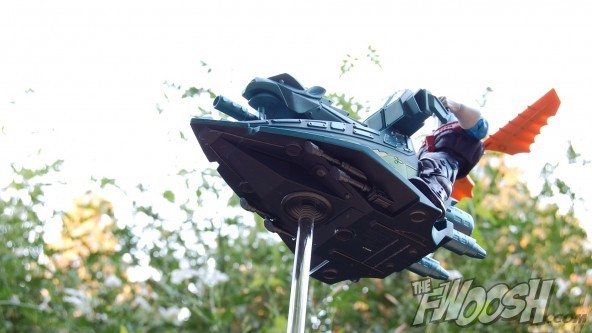 Since he’s only ever been seen piloting the Wind Raider, it tracks that his specialty is test pilot.  The description of cocky test pilot does call to mind the cocky test pilot of the DC Universe, Hal Jordan, which is not necessarily a bad thing as it provides a broad sketch of his personality.

I find that what I really want in a bio is a broad sketch of the personality and a bit of the origin story.  I was raised on Joe file cards, so that’s what I’m looking for.

The set comes in a standard oversized window box and shows off the set nicely.

It’s fantastic. All of the interesting stickers from the original toy have been converted into raised reliefs that look beautiful.  The panels are raised and have bolts and all of the control knobs are sculpted details, making this one of the most detailed sculpts in the line. I like that they incorporated some of the lower blasters as seen in the box art, but not on the toy into the final design. This is a well-armed little fighting vehicle.

There is a socket at the bottom of the sled that can plug into the Wind Raider stand, but some of the surfaces of the Jet Sled don’t quite jibe with the shape of the ring around the plug on the stand. So it fits on there, just not perfectly. I seem to recall that the Jet Sled fit perfectly onto the stand inside Grayskull when we looked at it at Power-Con, so the Grayskull stand must be slightly different.

Exquisite. The dragon sculpt on the side has this fantastic glossy paint that just sings. It’s so pretty. The main body has a good flat blue color and lots of shading to give it a slightly used feel, but not too much to make it look dirty or disused.

Well, I suppose you could count the Jet Sled as his accessory, but other than that, he has removable armor and a wing-blade thing. 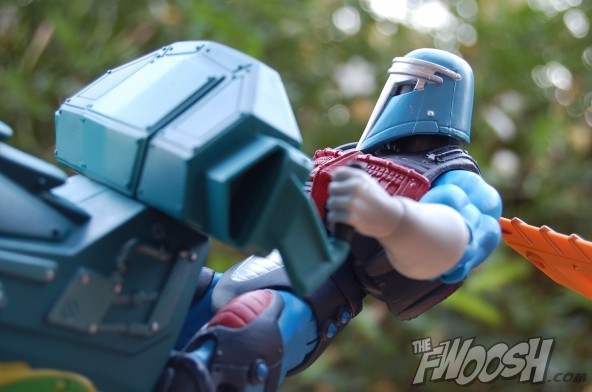 The removable armor is pretty much standard for MOTUC, except Sky High’s armor seems to be particularly bulky around the figure’s lats, which accentuates the weightlifter wide-arm stance you sometimes see in MOTUC figures.

That’s something production needs to watch because the armor isn’t always that bulky in that spot, and when it is, it affects the look of the figure.  I think it has to do with the location of the plugs holding the armor together.

The Wing blade is a cool little item that can serve as a dual-bladed melee weapon or can be attached to the back of the armor to look like wings. I like the look of the little wings and I think of it as the MOTU version of a parachute. 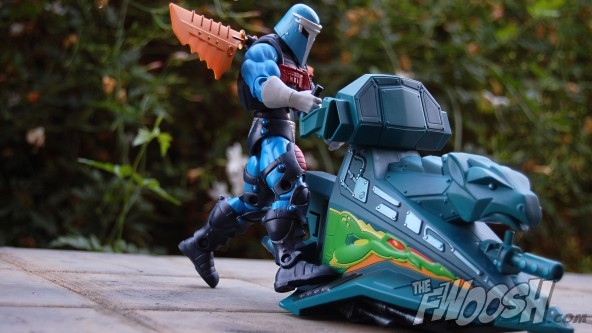 If Sky High blows up Man-At-Arms’ latest flying vehicle prototype or gets knocked off a Jet Sled by a Draego Man tail, the little wings pop out of his armor allowing him to reach the ground safely to fight again. 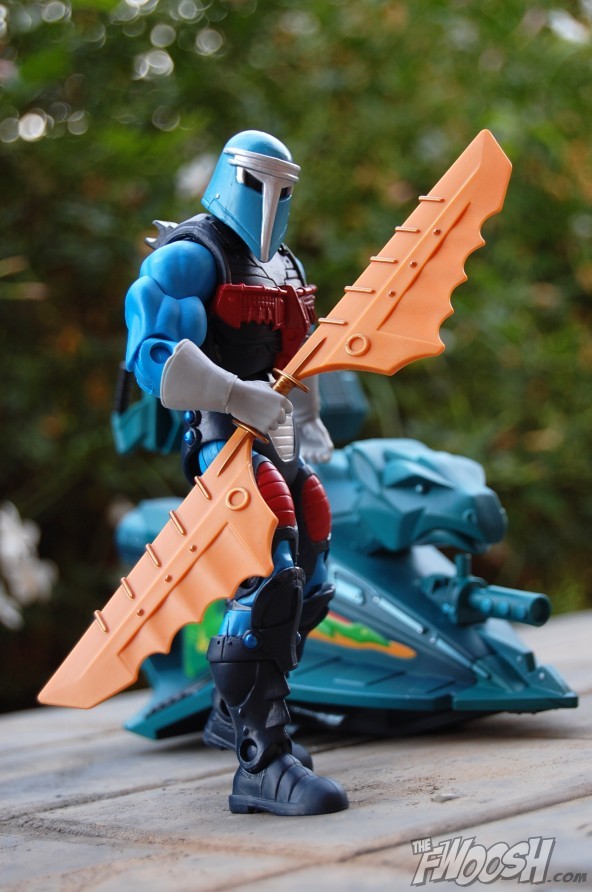 I know what you are thinking.  Matt, how can those tiny little wings allow him to fly?  Okay, you got me.  Maybe they are magic or made up of Nth metal or the Eternian equivalent. 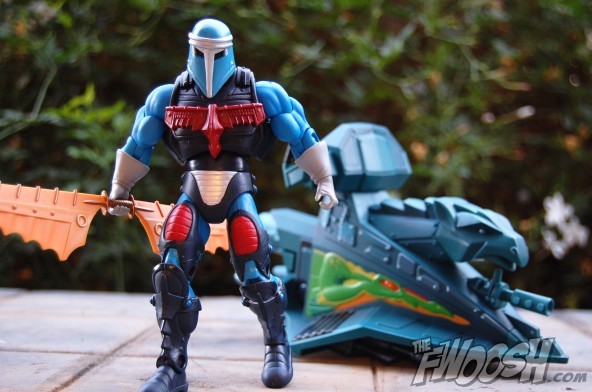 Practicality aside, I dig the profile he cuts with the wings attached to the back.  It just looks cool to me. 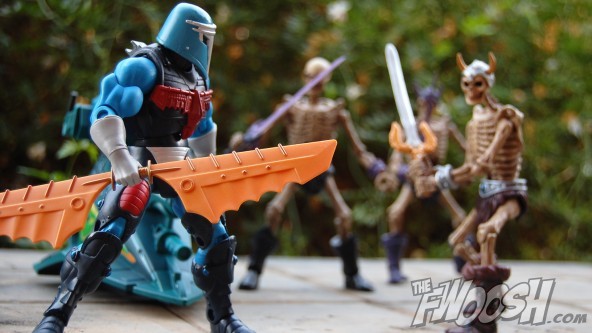 The Wing Blade is made of a sturdy stiff plastic and is sculpted to resemble the Wind Raider wings.  It’s an appropriate accessory for the Wind Raider pilot and continues the theme weapon vibe from the recently released Fighting Foe Men set. 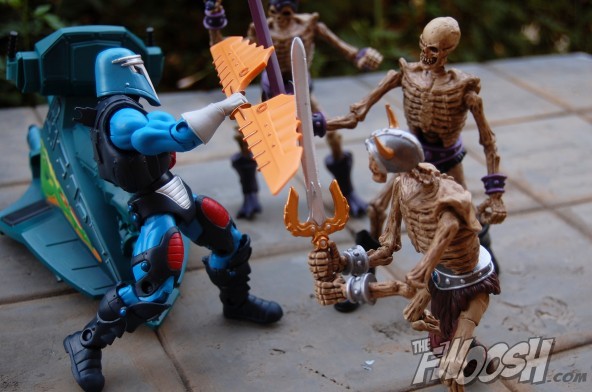 Sky High is based on a figure that you can barely make out in an old painted poster, so he looks to match the source material pretty well as far as I can tell.  Some imagination and extrapolation was clearly used here to flesh out the details and I think they fit in well with the MOTU aesthetic. I also like the helmet design. It’s got a pretty intimidating fierce look. 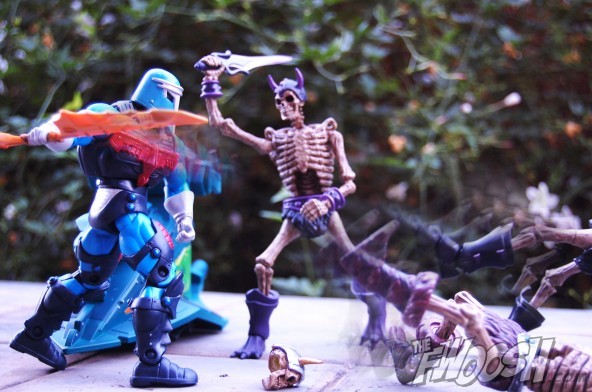 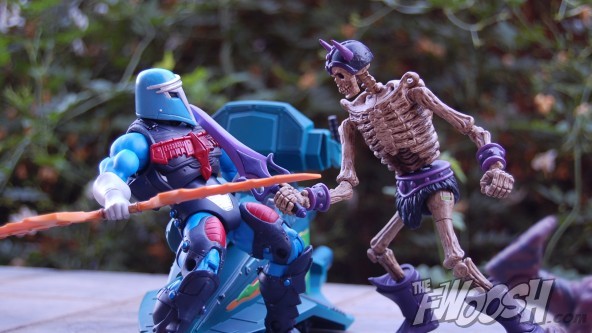 The new armor has a cool red animal motiff that appropriately resembles the hood ornament creature on the Wind Raider.  There is some cool tech details in the armor and head that fit well with the Trap Jaw legs.  I know a lot of people are sick to death of the Trap Jaw legs, but they work so well here for me.  The combination of light and dark blue with the red highlight look so sharp. 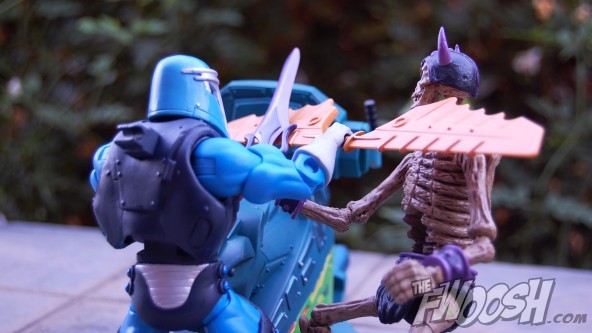 Sky High has standard MOTUC articulation.  His lower torso piece does inhibit forward leg movement slightly as it does with the original MEF figure. 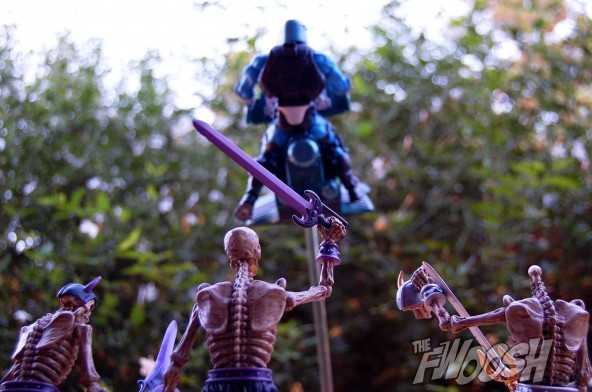 Sky High has basic paint work that’s clean and crisp for the most part but I’m not seeing any washes or shading to speak of.  There a couple of cool gloss black details painted on the armor. 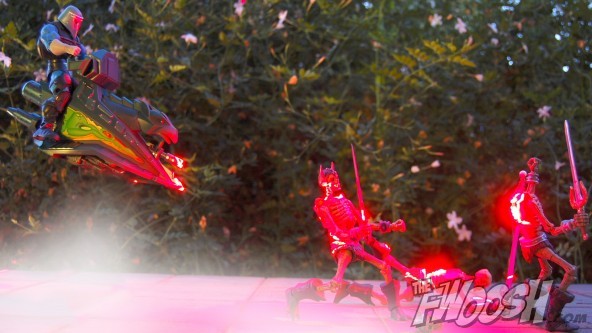 The Battle Ram was my most-wanted MOTU vehicle I never got as a kid. I especially liked playing with the jet sled portion when I was lucky enough to play with a friends’ Battle Ram, so I was extremely excited to hear that we would at least get the Jet Sled portion of the Battle Ram. There is something about the Jet Sled concept that appealed to me as I loved the rocket bike in Flash Gordon as well.

It was also used a lot on the Filmation ‘toon as just the jet sled, so it was iconic MOTU to me, and I wanted to have a few of the sled by itself for my palace guard army even before we knew how it would be released, if at all.  If we never get the rest of the Battle Ram in MOTUC, I suppose I will be sad, but I love that we got the Jet Sled. 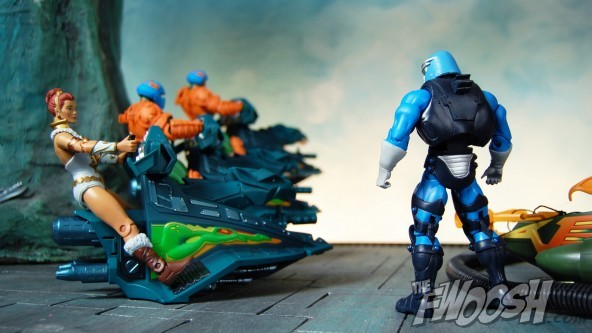 It would be great to have everything from that first mini-comic cross-sell Alcala drawings in MOTUC form. Fortunately the 4H did confirm at Power-Con that they did design this to fit in with a future back end of the Battle Ram if one was ever built. 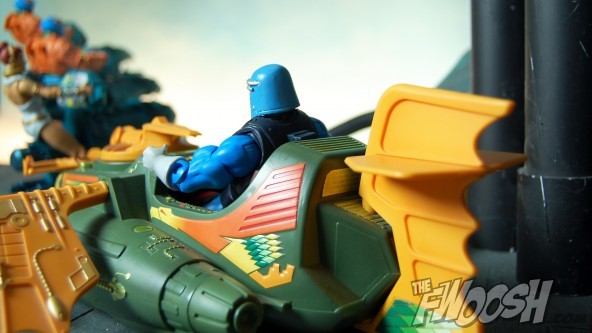 Sky High completes all the characters in this poster that VeeBee has been using as a checklist of sorts during the life of the MOTUC line at FWOOSH. I know a lot of people don’t like these obscure characters, but this is the kind of thing that makes the line cool to me, so I am very glad to have him as well. 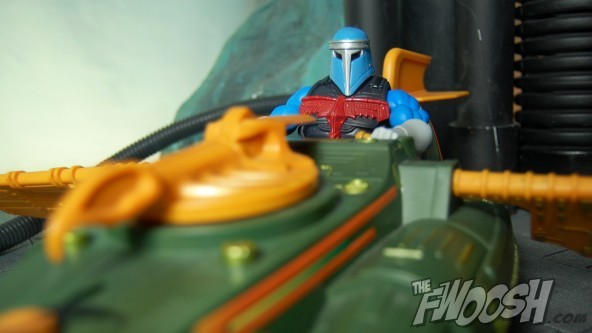 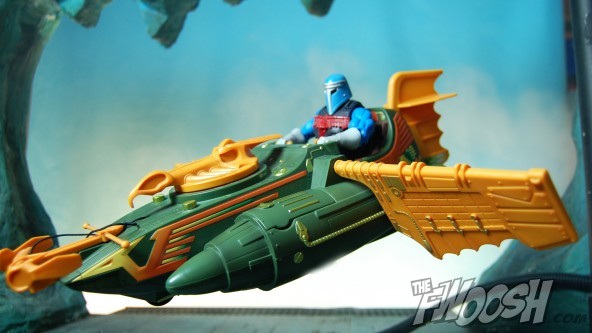 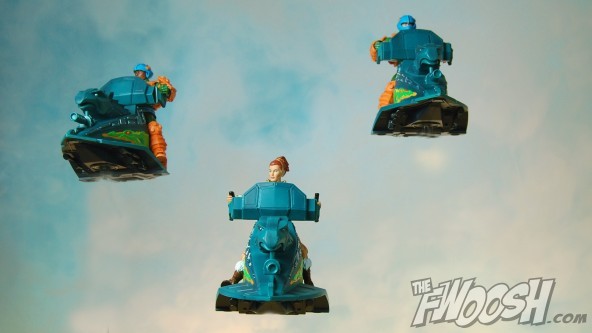 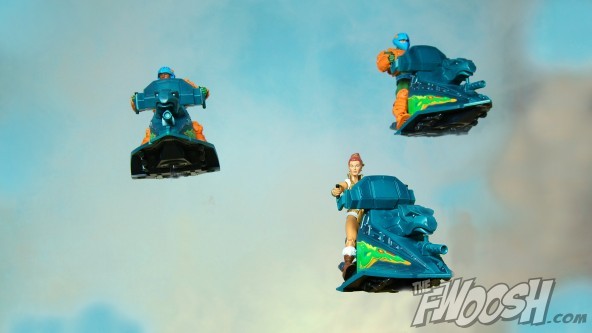 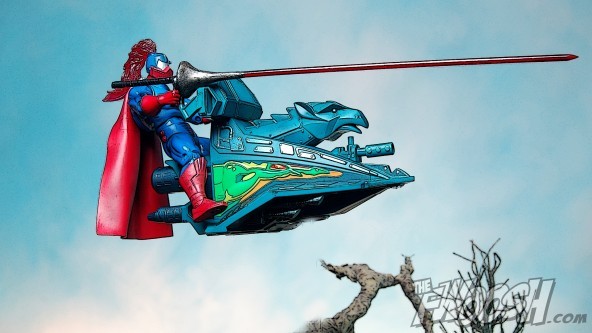 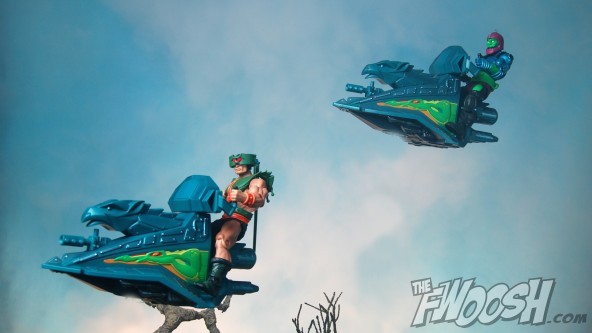