” You don’t know what it’s like out there. You may think you do, but you don’t.” –Rick Grimes 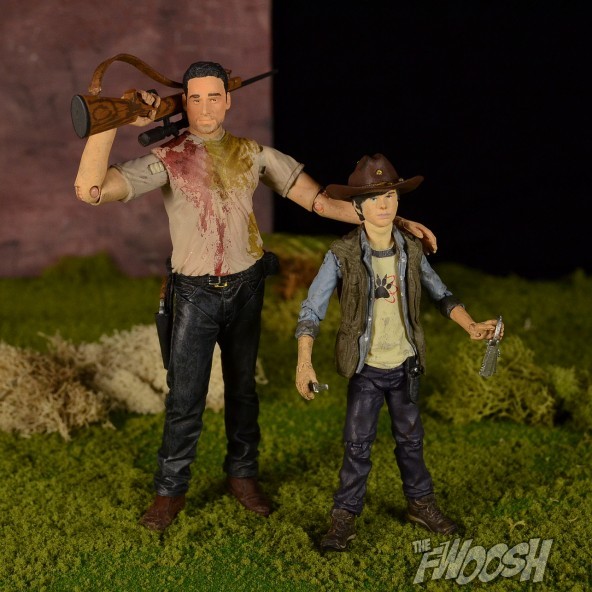 AMC’s wildly popular The Walking Dead is set to return to the airwaves in just a few weeks, and in anticipation — wouldn’t you know it? — McFarlane Toys’ newest wave of 5-inch figures based on the characters from the show has just started to pop up in stores. They’re not showing up in all stores, mind you. For all practical purposes, this new wave is currently an exclusive to… Walgreens. You read that right. Not Walmart — Walgreens. The drug store. And that’s not all — while most of the figures in this wave will eventually be making their way to Toys R Us, Amazon, BigBadToyStore, etc., this Rick Grimes figure is a legitimate Walgreens exclusive. Way to make it complicated, McFarlane.

Let me tell you how weird it seems to be strolling through the local Walgreens and then seeing these figures hanging on the pegs, particularly Rick. His blood-soaked shirt is an absolute anomaly among the squirt guns and Ninja Turtles that are typically found in Walgreen’s tiny toy aisle.

The packaging itself is the average blister card, but it does a nice job of showcasing the figures and all their accessories without the graphics getting in the way and hiding anything. The back of the card is standard across the wave and offers no further information about the character you’re buying. That would be my only crit of what McFarlane has done here. I mean, I suppose anyone buying these is already familiar with the characters from watching the show, but it would still be cool to get just a brief bio, or something to that effect. Maybe that’s just years of collecting that’s conditioned me to expect such a thing, but it just feels odd that there’s no information about the character apart from the name and a list of included accessories on the front. 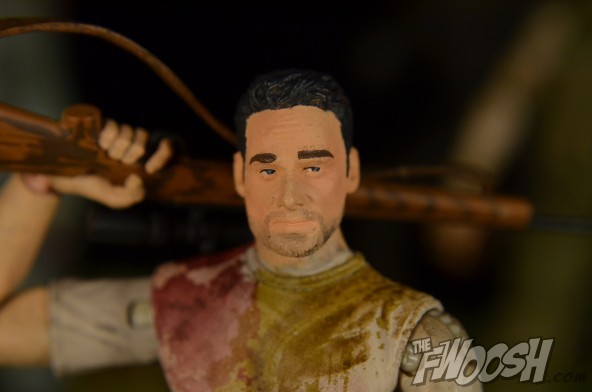 Rick Grimes is the de facto leader of the pack and the one whose point of view we basically view the world in the context of the show. If there’s a “hero” in the world of The Walking Dead, he’s it, though one of the major themes of the show seems to be the exploration of what it means to be a hero in a world where survival is all that matters. He’s fundamentally a good man who is continually tested, and sometimes he makes choices that are less than “heroic,” but that are necessary. He’s not a two-dimensional “good guy,” and that’s something that keeps the show interesting. 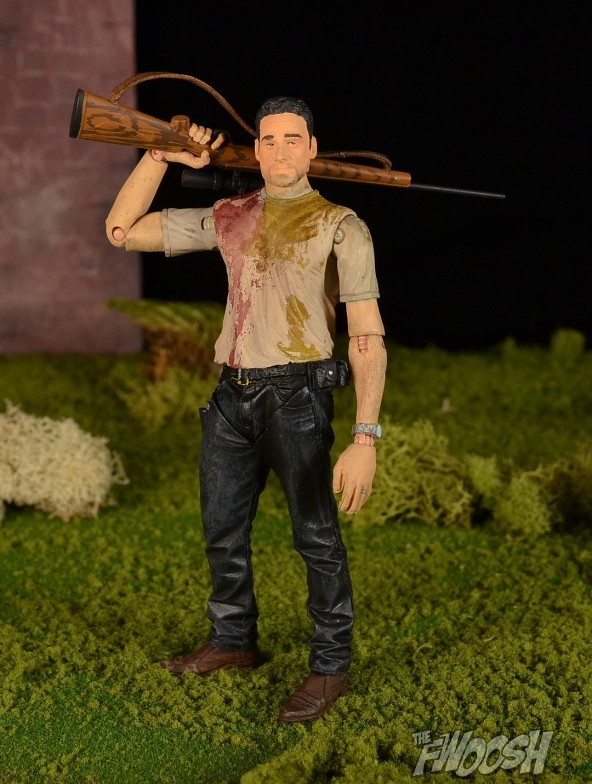 This figure is a reissue of a figure that was previously available, but the deco and accessories are a bit different, and since the original Rick is a pretty darn rare figure now, it is actually pretty cool to have another shot at getting one. But as nice as it may be to add a Rick to the collection, the figure itself really isn’t all that great as far as “action figures” go. From the waist up, he’s… OK. His likeness isn’t as true to the source material as it could be and only represents a passing likeness to Andrew Lincoln. The blood and gore on his t-shirt looks more like he was having a really hard time with a peanut butter and jelly sandwich than it does zombie blood. It’s not horrible or anything, and it is nicely detailed, and, realistically, that probably is about as much gore as we can expect from a major retail toy line. 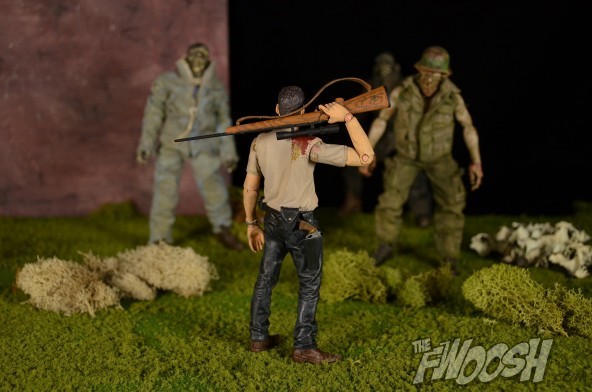 His upper body is decently articulated with a pretty good range of motion in his arms and head, but where this figure really falls apart is the articulation from the waist down. McFarlane will never shake its reputation of producing minimally articulated statues, and some of the earlier Walking Dead figures are definitely in keeping with that tradition. There is very little articulation in his legs, and what’s there really isn’t very useful. His hips are cut in such a way that does allow for some movement, but he looks ridiculous in any pose that isn’t the standard vanilla (above), and his ankles move just a little bit — most likely to aid in the figure’s overall stabilization.

Yeah. There’s not much you can do with his legs. Good thing he looks good in a vanilla pose! 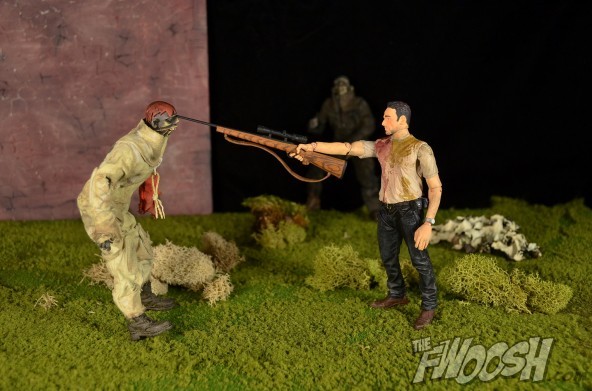 His accessories almost make up for his lack of articulation. He comes with a shotgun, a pistol, a zombie-wrangler tool, and two swappable hands. The pegs in his wrists are scary small, so I find myself saying a quick little prayer that they don’t snap off each time I switch out his hands. Nothing has broken so far, though, so hooray for sturdy plastic. 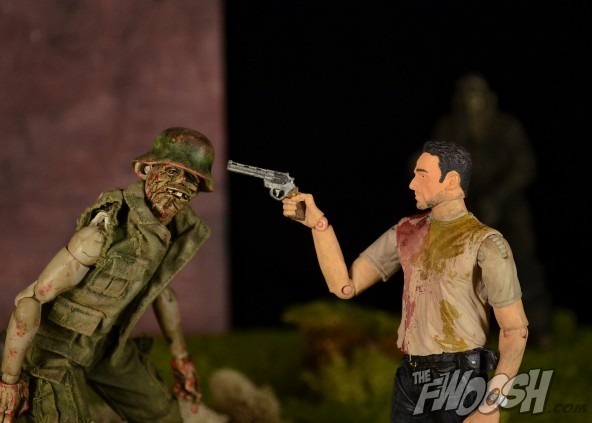 The expression on his face is so placid that scenes involving his blowing zombies’ brains out look pretty comical. 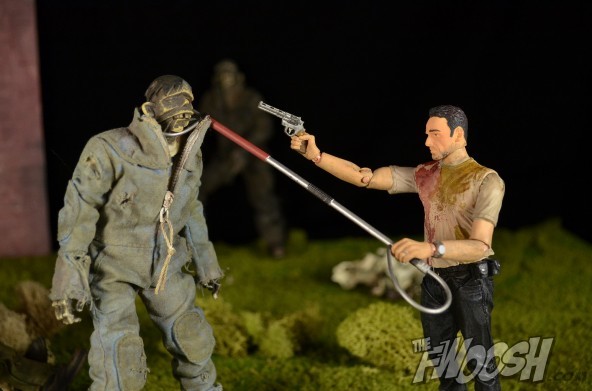 All of his accessories are packed with detail and look very realistic. Despite Rick’s limitations in the articulation department, I do find him quite a lot of fun to play around with, and he’s been working out great as my official ThreeA Zomb hunter. 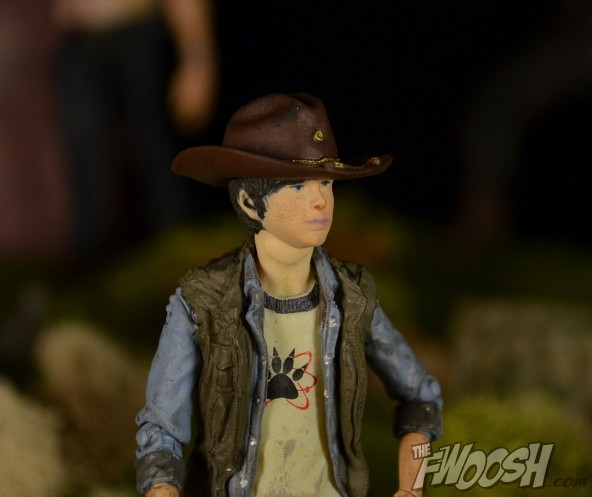 Carl Grimes, Rick’s son, is a much more satisfying action figure than his dad because he is actually a decently articulated figure and not a McFarlane half-statue. On the show we get to watch Carl grow up in a world that has lost all traditional meaning, and, as such, he’s forced into an adult role without really having experienced a true childhood or adolescence. But, because he is just a kid, he has to test the world around him, and that often lands him in some pretty sticky situations. 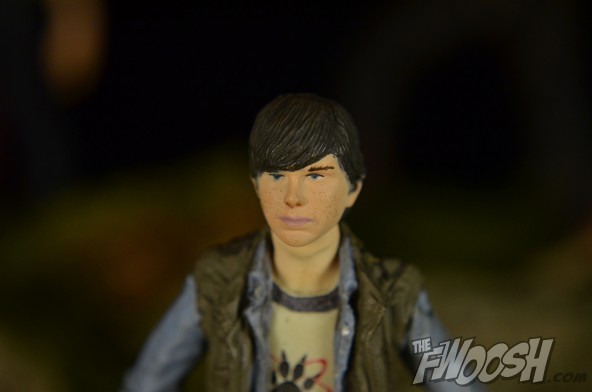 The head sculpt bears a strong likeness to Chandler Riggs who plays him on the show. But, man — you’ve really got to check for good paint apps on just about every figure in this wave. For each figure the sculpt is definitely there, but the same can’t be said for the paint. The paint will make or break these figures, and Carl here is a good example of that. I scored this figure with the help of fellow Fwoosher Sidious and I’m thankful he hooked me up with a good one, but I’ve seen a few that just look horrible, so definitely take your time and check if you can.

Carl is about four inches tall, so just slightly larger than the average Star Wars or GI Joe figure. I like that he actually looks like a kid and his proportions are just as they should be to reflect his age. His clothes are nicely detailed and are just slightly baggy and sloppy — just how a boy entering adolescence would likely wear them. The paint apps are all really strong here too, and they look very convincing.

Carl comes sporting his father’s hat, which is a pretty good fit for him. He looks good with it on or off, and that’s a pretty neat trick McFarlane pulled off. I expected him to look kinda doofy with it on, but it totally looks convincing. He also comes with a small knife and a set of keys. The keys are keys to the prison and look like quite a heavy set for someone so small to be carrying around. 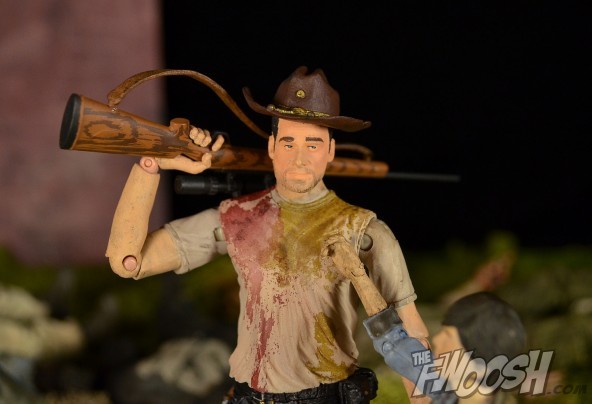 Even though it may technically be his dad’s hat, the hat really does belong to Carl since it really doesn’t fit his dad very well at all. Rick’s original release included a hat, and I assumed this would be that same hat, but I can’t imagine it is since it fits Carl so well and Rick… not so well.

Carl’s articulation is much more dynamic than his dad’s, but it still leaves a little something to be desired. His legs don’t have a very good range of motion despite having what feel like ball-jointed hips and knees that have a sort of “elbro” design to them. The design of his legs does a good job of hiding the articulation, but it’s maybe a little too effective. His waist has a soft plastic overlay that definitely hinders his range of motion and makes it tough to get him in any pose beyond vanilla and “kneeling.” His arms have no such hindrances and can move freely, but his wrists have just a single hinge that only allow them to move one way. Not a deal breaker, but just… weird. Like his dad, there’s no ab crunch, but that seems to be becoming more and more common these days, and it’s not unusual for a 5-inch figure to be lacking that point of articulation (see every Doctor Who figure ever released).

Carl also comes with a green medical bag that he can’t hold or carry at all, so it just sits there. Neat, but it does feel kind of superfluous. It’s partially unzipped, and you can see some nondescript “medical” supplies in there, but, for the most part, it’s a bit of a useless accessory.

Aside from that, he’s a fine example of a child in action figure form, something we don’t see often enough. 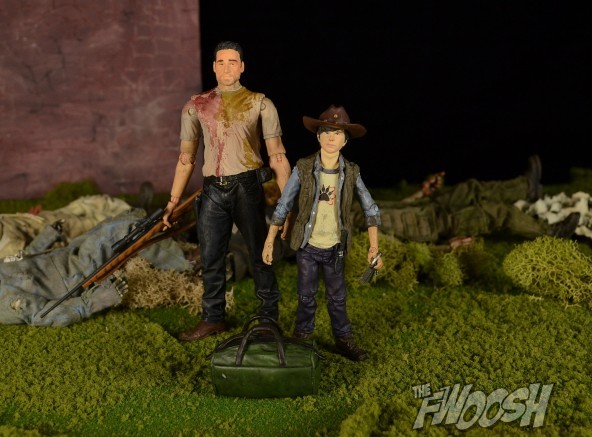 Both of these figures are welcome additions to my small, but growing, Walking Dead collection, and it’s nice to have more figures to terrorize my horde of ThreeA Zombs. Despite their limitations, I found these figures to be fun additions to my collection, and I can’t wait for further Walking Dead figures to make their way to the pegs, especially since they seem to be getting better and better. I managed to find this entire wave at Walgreens, but it took me multiple trips to several different locations because distribution has been a little uneven. In fact, I just scored the two Riot Zombies from this wave this afternoon, so look for further Walking Dead features on the Fwoosh this week!

These figures can be had currently at your local Walgreens, but in another week or two they should be available everywhere McFarlane figures are usually sold. Happy hunting!