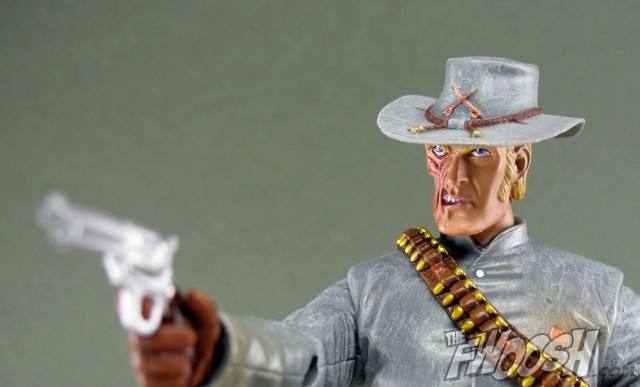 Though the DC Universe is primarily a superhero universe, there are a large number of characters that don’t fit into that traditional spandex milieu, and the line is richer for their inclusion. There were a handful of characters in this slightly adjacent corner of the DC Universe that I thought should have had a fighting chance, while there were others whose existence I would have been pleasantly surprised by but didn’t expect. 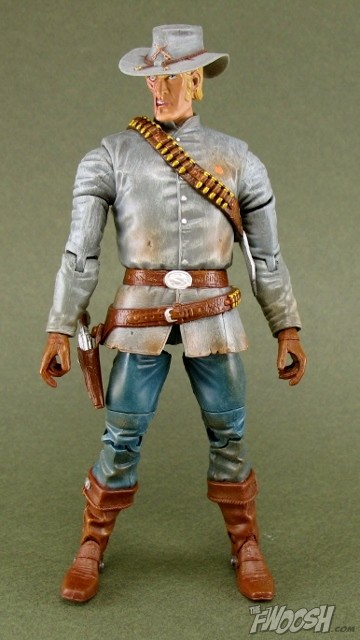 First among those I expected were Jonah Hex, Sgt. Rock, and Warlord. Unfortunately, Jonah was the only one of those three to make it out. This put a serious damper on my desires for Arak, the Unknown Soldier, Creature Commandos, Bat Lash, El Diablo, Enemy Ace, Blackhawks, Sugar and Spike (say whaaaat?),  and on and on. Oh well, no line can be perfect. Why? Because communism, that’s why. 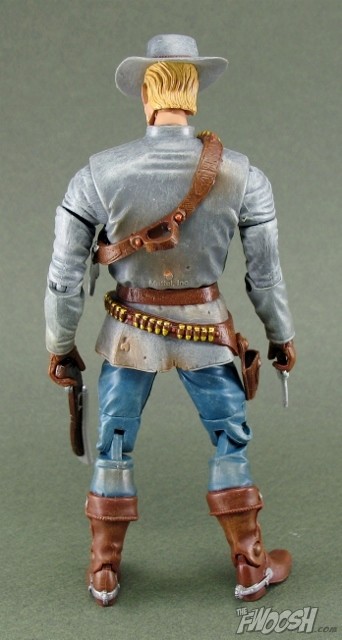 However, the fact that Jonah made it into the line was a major coup in my eyes, and even though he has a few weaknesses, I still consider him to be one of the characters that defines the potential this line — and we — once enjoyed.

Jonah debuted in wave 16 of DC Universe Classics, otherwise known as the “Bane wave.” That wave alone featured an abundance of new tooling, and Jonah benefited from it. He’s essentially a completely new sculpt from head to toe, and rightly so as there were no western figures to draw from. Because of this, many collectors seem confused as to what to do with him. Well, to those short-sighted people I say put him right at the front of the pack — because he’s Jonah frickin’ Hex. 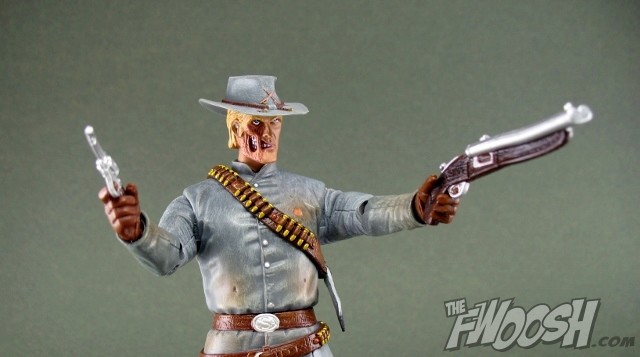 It was initially suspected that his torso was a rubber overlay. But instead we got a completely new sculpt lacking an ab crunch. Between that and the bottom of his coat, he’s less poseable than what we’re used to in the average DCUC figure. His elbow hinge is similarly a bit thick, so he’s barely able to get a full 90 degree bend there as well, so there are some deficiencies here and there. But for doing what he does best, which is shooting and looking fierce, he has no equal. The complaints are nitpicks that don’t negate the awesome factor of finally having a good Jonah Hex figure. He’s got a great leather-simulated holster and bandolier with intricately sculpted bullets and a small feather. 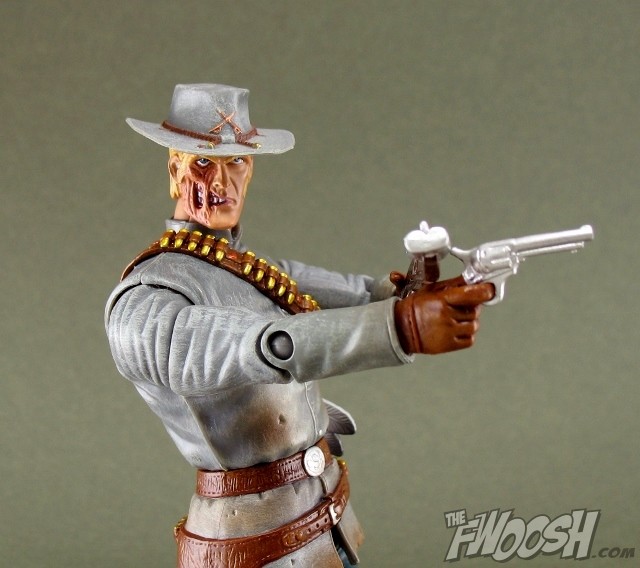 Hex features a nice, dirty paint job with smudges of dirt on his jacket and his pants. When you’re riding after a bounty, you ain’t got time to launder. His jacket is tattered and features a few rips that are probably intended to be bullet holes. The edges are frayed. There’s a lot of personality in his clothes. 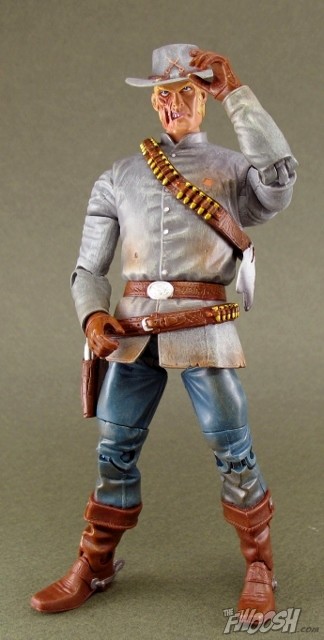 Jonah’s a man that needs weapons, and there’s a small niggle about that as well. See, Jonah has, more often than not, been portrayed as having a pair of matched, ivory-handled Colt dragoons, one in his holster, the other tucked into his waistband. Unfortunately, the figure only comes with one. He does, however, come with a nice shotgun that slides into a holster on his back. But where’s the other gun, Mattel? *shakes fist* 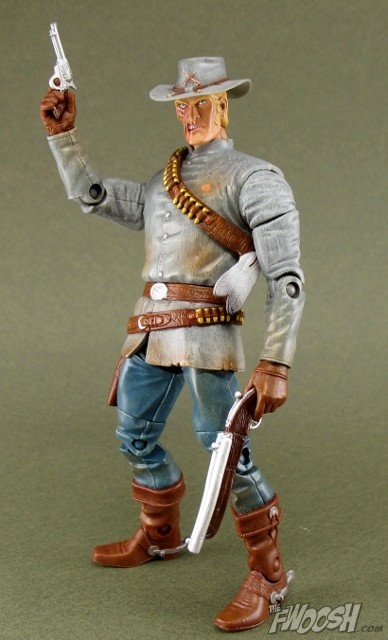 The last and most important part of Jonah is his face. Hex ain’t pretty. He’s a man who was scarred and carries those scars like a badge. They went with the more drastic and gruesome scarring of his more recent comics and not the slightly less evocative scars of his Bronze Age appearances. I dig the face a lot, but I actually would have enjoyed a more classic alternate head. I know, I want the world and I want it now. The eyes are painted a little wonkily, but DC figures had a tendency to be looking up a lot. Probably rolling their eyes at the fan complaints. Hi-yo! But what’s most important is that he looks like a complete bad-ass, and he’s got that covered in spades. 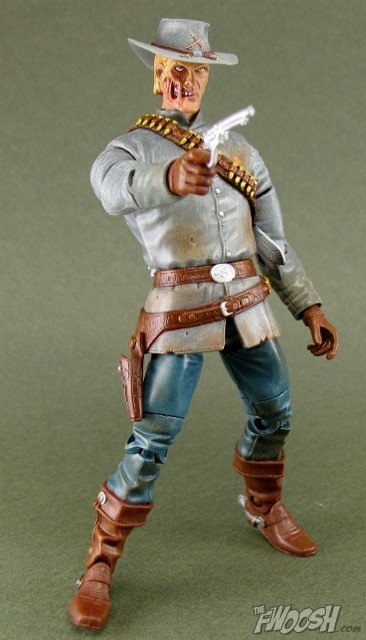 While I wish DCUC had been able to provide a Sgt. Rock figure, the fact that they made Jonah Hex when the competition will more than likely never consider putting out a Rawhide Kid is one of those things that made this line unique and special. Nitpicks aside, this is a great figure, and it fulfills one of those lifelong toy dreams. 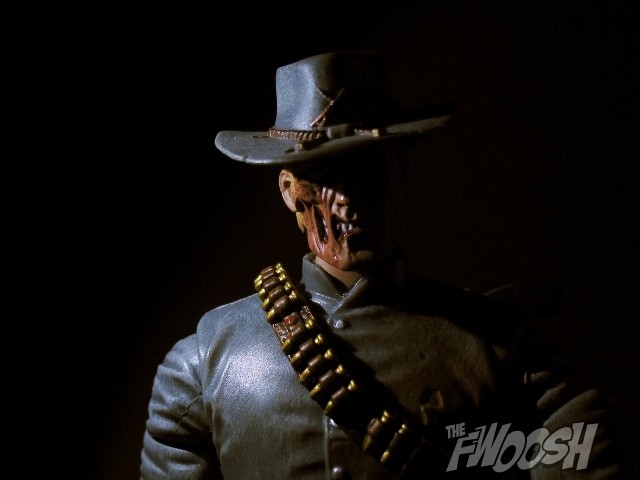