So as can be read here and here, the recent announcement of Blade at the 2013 Power-Con has stirred up all kinds of questionable feelings in my Toyns (that’s toy loins, in case you were curious) and has renewed my nascent interest in plumbing the depths of that revered classic, the Masters of the Universe movie. Admittedly, it seems like even the New Adventures of He-Man has a more dominant and vocal following than we of the MOTU movie, but we are strong, we are proud, we are legion. Well, maybe we’re three or four guys with questionable taste in cinematic endeavors, but, dammit, we shall be heard!

In case the record isn’t broken yet, the Masters of the Universe movie is better than you think it is. And I know you have an opinion on the subject because if you’re reading this, you’re either a MOTU fan, a toy fan, or just a fan of clicking links at random. Which is just fine. But if you say that it’s not the most awesome ’80s live-action movie based on a children’s toy property, then you’re just flat wrong. I’m sorry, but you are.

But enough about the awesomeness of the movie. Regardless of your opinions of that slice of cinematic masterpiece wherein a little dude with big ears talks to a cow, you can’t dispute the fact that toyetic is toyetic, and this movie is jamcram-packed with toyetic designs, most of which were brand new. No, there was no Tri-Klops or Mer-Man in the movie; however, in their place we got the funkiest, baddest alien-looking rammajamas this side of the bounty hunter scene in The Empire Strikes Back. In addition, we got Storm… I mean Shock Troopers… that would make every army-builder out there broke.

Hell, Shock Troopers may have even worse aim than Stormtroopers…

Despite the concentrated awesomeness of these designs, Mattel doesn’t actually have the movie license. Sure, they can make Blade, Saurod, and Gwildor, but that’s only because they were made into toys back in the vintage line. But let’s take a look at what we could get if Mattel were to spring for the movie rights.

First up: the good guys. 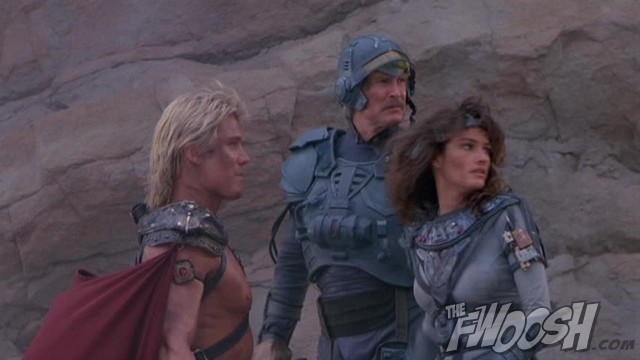 Now, the good guys aren’t my first choice if toys from the movie were going to be made. As far as I’m concerned, I already have the definitive He-Man, Man-At-Arms and Teela, and Gwildor will undoubtedly be coming. Hell, Gwildor may even be the Unnamed One. Wouldn’t that kink a colon or two. But I wouldn’t say no to He-Man’s movie outfit. I smell a three-pack.

He-man as portrayed by Ivan Drago ditched the furry undershorts and went full-on bikini briefs in this movie. I loved the red cape he wore in the beginning of the movie; it really gave him that regal freedom-fighter superhero vibe. Besides, everyone looks bitchin’ when they’ve got a cape swirling behind them.  While everyone would, no doubt, want the standard He-Man head, maybe a Dolph-inspired version could be tucked into the corner of the package for those who wanted a strictly movie-inspired display. Hell, if Flipshot can look like Val Kilmer, then they should be able to get away with that. 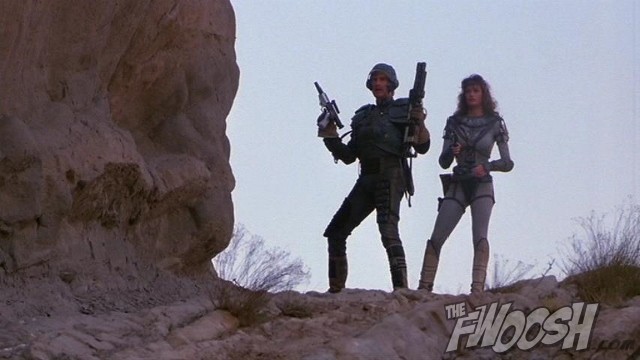 Man-At-Arms ditches the green and orange and goes for a flatter, grayer militaristic color. There are obvious design elements carried over, but they’re altered and recolored just enough to make them feel totally new. While I am an orange-and-green loyalist, I wouldn’t mind a figure of Duncan in this style of military armor. I’m sure the Horsemen could make him look like a bad-ass.

Teela’s costume, as all costumes that showed a lot of skin, was radically different. She’s a lot more… covered… than her toy and cartoon appearances. While she had the attitude for Teela, she looked like her in name only. Still, stick them in a three-pack and it would be the bee’s knees.

So let’s move on to the far, far more interesting side: the bad guys. 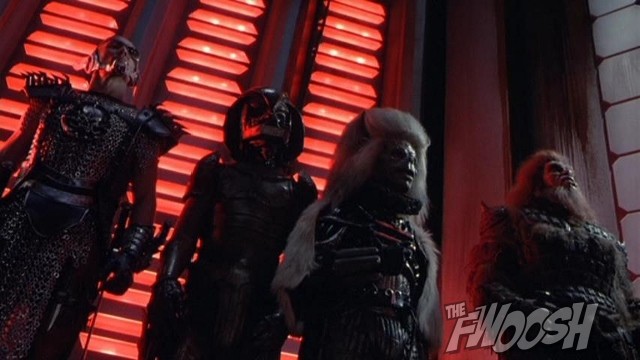 Eternia is defined by the bad guys. While I love each and every good guy, it’s the strength of the villain that makes a property what it is. MOTU benefits from one of the best villain rosters in toy history. While the movie chose to ignore most of that, they actually added a handful of brand new villains that elevate the property instead of withering it. I’ve already gushed an uncomfortable amount over the upcoming Blade figure, so let’s move on to the only probable guaranteed figure of the new bad guys: Saurod. 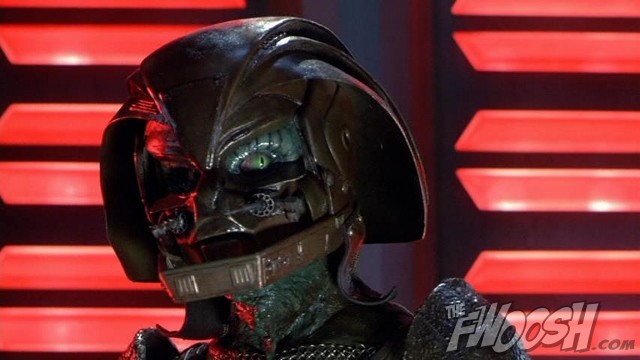 Saurod was an armored reptilian creature with cold eyes and a tail. Just look at those peepers. He is judging everyone around him as being unfit to stand in his presence. Actually, it looks like he’s wondering how everybody tastes. While his vintage figure spit sparks, I don’t believe there was a single incident of spark-spitting to be found in the movie. He usually just fired his blaster with all the precision of a blind monk and stood around looking bad-ass. Until Skeletor grew displeased with him. 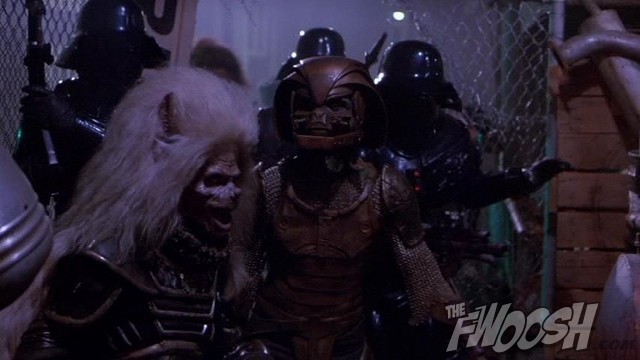 While his role in the movie amounted to doing little more than looking awesome, that’s perfectly acceptable. Some actresses have made entire careers out of that. Ain’t a crime to be so sublime. With Blade announced, I can’t wait until Saurod is revealed, and he better be revealed for late 2014 or early 2015. He will fit right in. Now for the characters or redesigns that may not be seen. Skeletor is, of course, a staple of the property, and there wouldn’t have been a movie without him. He actually had two distinct looks in this. His regular appearance was a departure from his well-known purple crossbones and exposed blue skin. And he wore a cape, just like He-Man. I wonder who started wearing one first. Actually, Skeletor probably learned from Darth Vader that the key to entering a room and having all eyes on you is to wear a long black flowing cape. And the first shot of Skeletor sweeping grandly into his throne room flanked by his Shock Troopers couldn’t have been more plainly swiped from another property set in another galaxy far far away. I’m actually surprised nobody whipped out a “light sword” in this movie with all the nods. 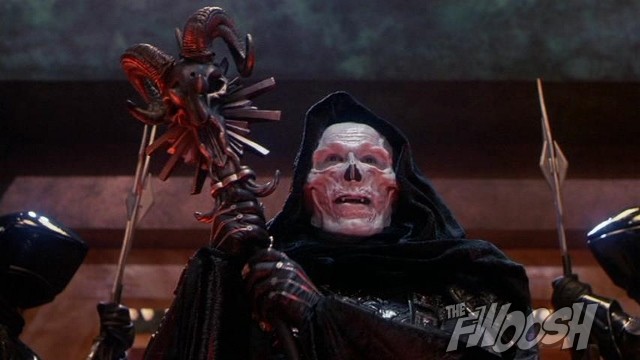 Skeletor’s main look was later shifted to what has become known as either King Skeletor or God Skeletor. It was shiny, it was gold, it was regal, and it looked heavy as hell. But just imagine what this figure would look like. It would put the awesomeness that would be a Classics-styled Disco Skeletor to shame. And yes, I’m the guy that wants that. But an all gold super-pimped-out Skeletor would make an excellent sub-exclusive figure. Who wouldn’t sign up just to have one? 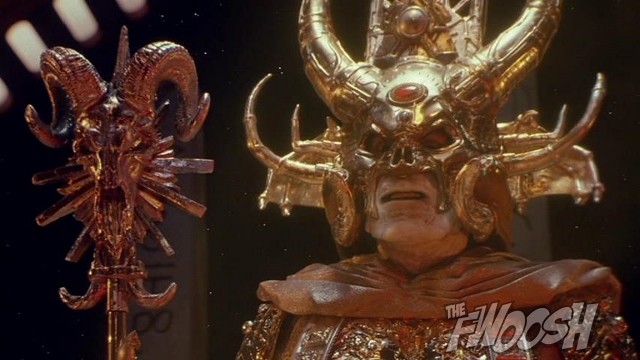 I really liked Evil-Lyn’s movie outfit. Again, like Teela, Lyn was not as exposed as she was usually depicted because Eternia apparently enacted strict decency laws. While it’s unfortunate that her metal longjohns were not omitted from the final product, there’s still a certain grace to the costume. Plus a cape. Gotta have a cape. 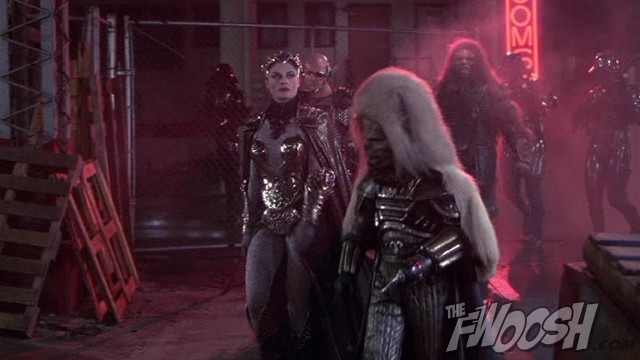 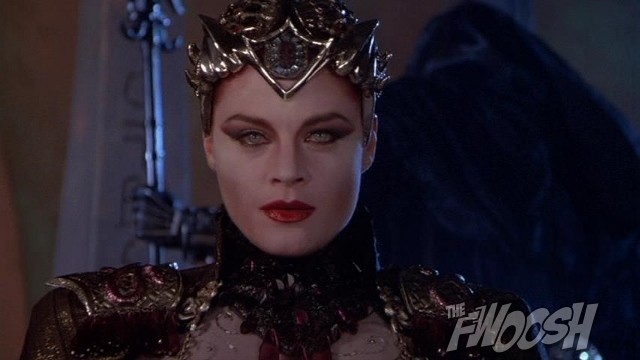 The final new entry into the all-new villains trio was Karg. Man, who or what was this thing? I don’t know and I don’t want to know, but Karg got the job done, leading most of the missions and just looking as nasty as possible while doing it. With that bouffant hair, that horrible complexion, and, to top it all off, that merciless hook hand, Karg was every kid’s bat-faced nightmare that lived in their closet, and he made Saurod look like a Happy Meal spokesperson. You get the idea that this is a creature that does horrible things behind closed doors and people shudder when they pass by, feeling lucky that they’re not trapped in the room with him. The words “Send him to Karg” probably makes every one of Skeletor’s lackey’s cringe just a little. That hook has done some bad bad things. Even his damn name is unsettling. Karg. Like Arrgh, but with a “K.” His name is an utterance of pain. Dude, you are not right at all. 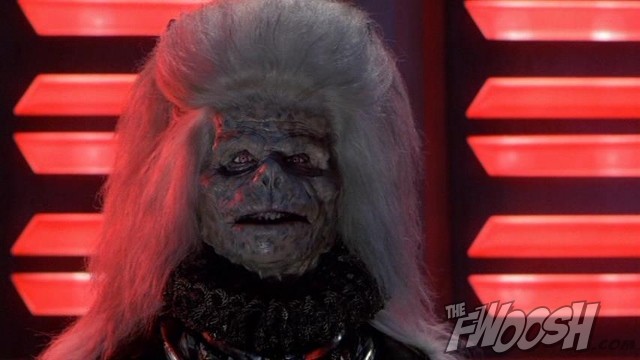 Karg is a short little thing, but he’d be a full sculpt and would be worth every penny. A shelf with just Blade and Saurod would be a poor shelf. It would need the guy that makes the others look pretty in comparison. His fiercely barbed hook would make Trap Jaw’s look pitiful in comparison. Now for the last and possibly the most important of all movie figures that need to be made: the army builders. As I said, the MOTU movie took a lot of cues from Star Wars, and nowhere was this more evident than the endless legion of armored troopers that Skeletor had to command. There were a legion of them, and they were horrible shots. The only thing that separated them from Stormtroopers was their sleek black armor in place of white. 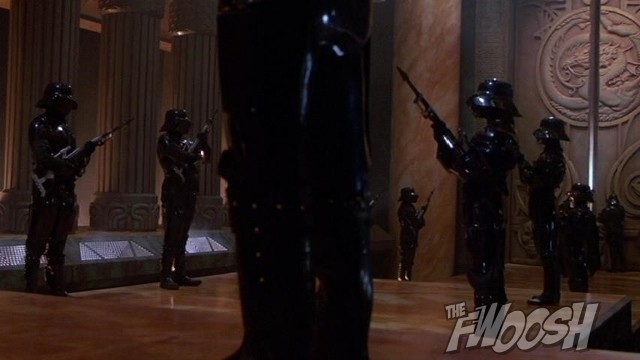 Army builders are always a cause for excitement and binging for most collectors, and a a fleet of these guys would perk up anybody’s collection. While the Horde has Horde troopers, the Snake man have… Snake Men, and the palace has their Royal Guard, Skeletor really needs a mindless legion of faceless drones, and the Shock Troopers fit the bill. Put them in two-packs like all the army-builder types have been so far and watch them sell out.

There are actually a few different types of Shock Troopers. Some wore capes (of course), while most were just straight armored; however, there was a completely different type of trooper that I’m going to call “Disk Troopers.” They were the ones that floated around and menaced He-Man and his friends on those Hover Disks that He-Man took a ride on. Though they were plentiful during the earth invasion sequence, those would work out in single packs due to the fact that they’d need to come with disks included. I’d buy a few of those also and would dangle them in the display. I could pop my Dolph He-Man on one and have him surf the sky also.

So there you have it. Though occasionally maligned, the Masters of the Universe movie is filled with designs that need to be made into plastic. The bigger this universe gets, the better it gets, the more diverse it gets, and the more just plain fun it gets, and it won’t ever be truly complete until each corner gets the full respect it deserves. That, of course, includes the best live action ‘80s movie based on an existing children’s property.