At a glance, this set seems like an expensive, needless repackaging of several figures that were released not all that long ago. My first instinct was to skip it with extreme prejudice, but the more I looked at it and thought about it, the less ridiculous and superfluous it seemed. So, one day, loaded up with store credit and a coupon, I marched right on over to the Transformers aisle at my local Toys R Us and I bought the last one they had on the shelf. And, honestly, I don’t regret it.

The packaging is pretty swanky and showcases the figures nicely. The red box really jumps out at you from the shelf, and the window-box feature looks really cool. This would make for a nice display piece for a MISB collector, and I’m tempted to keep the box myself, but space concerns make that not very feasible. 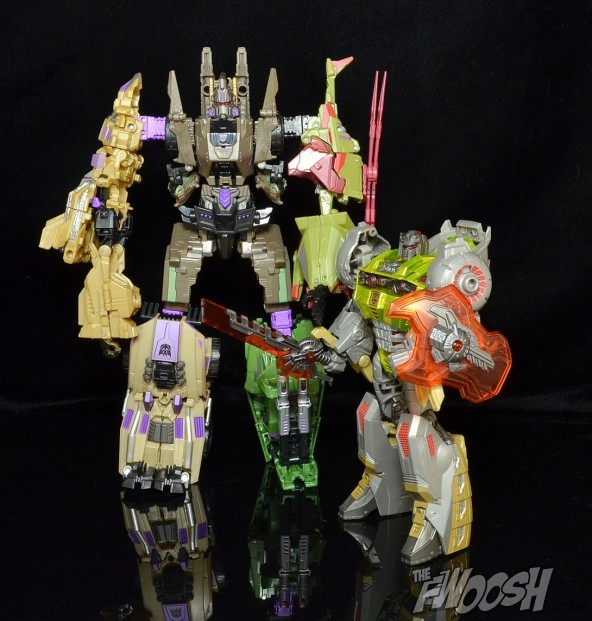 The main appeal here is the exclusive decos you get with the set. Bruticus is very similar to the SDCC-exclusive version that came out in ’12 with only slight color differences in two of the figures (Blast Off and Vortex). This version trumps the standard retail version (often affectionately referred to as “Fruticus”) because it is nowhere near as garish and actually resembles Bruticus as he should look, at least in terms of colors from the Fall of Cybertron game. It’s not an exact match, but it’s closer. The color scheme is much more subdued and actually looks like something you’d actually see military vehicles decked-out in. Imagine that.

Grimlock is sporting some gold paint meant to replicate the gold from the G1 figure, but the gold definitely has a bright yellow, almost green, hue to it, so it kind of misses the mark a little bit. The camera picks up the green big time — he doesn’t actually look this green in person; it really is more of a true yellowish-gold, but the camera likes the green for some reason.

The flat gold plastic of the standard retail version may actually work better as far as the look of the character/figure is concerned, but your mileage may vary here. Personally, I think I want to like the gold more than I actually do because I love the idea of Grimlock sporting some vac-metal gold, so the nostalgia I have attached to that may be coloring my opinion of it a bit here. Plus, you know, shiny. It’s hard to deny shiny.

Now, while most of these figures may look better than what was available at retail previously, make no mistake — they are still saddled will all the deficiencies and shortcomings their standard retail counterparts were. Grimlock is still mostly hollow in dino mode, and the Combaticons are still the same crappy, underarticulated, hollow figures that combine into a very gangly, unfortunate-looking Bruticus. Despite all of that, though, everything manages to work better here.

What made me want this set, really, is the upgrade set Echotransformer and X-Transbots are working on that will turn Bruticus into a much less gangly figure and one that actually resembles his on-screen counterpart from the Transformers: Fall of Cybertron video game. The upgrade really capitalizes on the figure’s potential and it looks great. It even rivals the Fansproject upgrade that came out for the Revenge of the Fallen Bruticus set a few years ago. So I bought this sucker banking on that upgrade set’s actually being released, so fingers crossed that it does see the light of day soon. In the meantime, or if that set never actually comes out, I’ve got to find a way to display him in such a way as to de-emphasize his general… weirdness.

Another reason I bought this set is because I really do want to see Hasbro try this sort of thing again. Bruticus was their first attempt at a deluxe-class wave of figures that all combine, so if we could get a set of Technobots or Protectobots or Stunticons, then that would be even better, I think. Hasbro is making moves in the right direction here, so hopefully they continue down this line. The good news is the retail Combaticons did not become the all-time champion peg-warmers I expected them to be. In fact, they usually sold pretty briskly from what I saw, and I never saw any of them really peg-warm, so hopefully Hasbro gets the message. More combiner teams, please.

As for the individual Combaticons, here’s a quick rundown:

I’m not crazy about Onslaught being brown and green like he is here. The G1 colors are just too ingrained in my brain to let me consider and accept anything else, so I may eventually hunt down a Takara Onslaught. It also doesn’t help that this mold is one of the worst ever, so maybe it’s appropriate that it’s brown. Heh.

Swindle fares a little better because, while it’s not the greatest mold to ever be released, I don’t hate it. The colors here work for me, and since he is one of my favorite Decepticons, I’m very happy to have a deluxe-class version of him for my shelves even if he isn’t the most perfect representation of the character ever.

I like Brawl’s look, mostly, but neither mode really works all that well for me. It’s not horrible, and I ‘d have to say he’s probably my second favorite after Swindle, but… is that really saying all that much? He could be a little more streamlined, but since he’s mainly going to be displayed as a foot, he’ll do.

Like Onslaught, my brain just cannot get away from his G1 color scheme, so I’m having a hard time accepting a red and tan Vortex. The mold itself isn’t the greatest either, but it serves its purpose. I do wish they’d release a G1-esque gray and purple version, though.

Blast Off’s design is just as much a departure from the original G1 design as the others, but I do kinda like how he turned out — his ‘bot mode, anyway. He’s got a cool-looking robot mode, but his shuttle/drone mode looks a bit too random in design for my tastes. It’s not terrible, though. I can’t help but wish his tan coloring was just a bit of a darker brown, however.

As he is now, he doesn’t hold a candle to the Fansproject Bruticus, and it’s mostly just his arms that are holding him back. Neither arm is all that great, but Blast Off in particular came out really long and gangly (there’s that word again). There are alternate transformations for both Blast Off and Vortex that are intended to make them look less scary/weird when they’re in arm mode, but I haven’t found one that I really like all that much. Hopefully the upgrade set will address this (and it looks as though it does).

Until then, “Spindly Joe” here will be displayed as is: 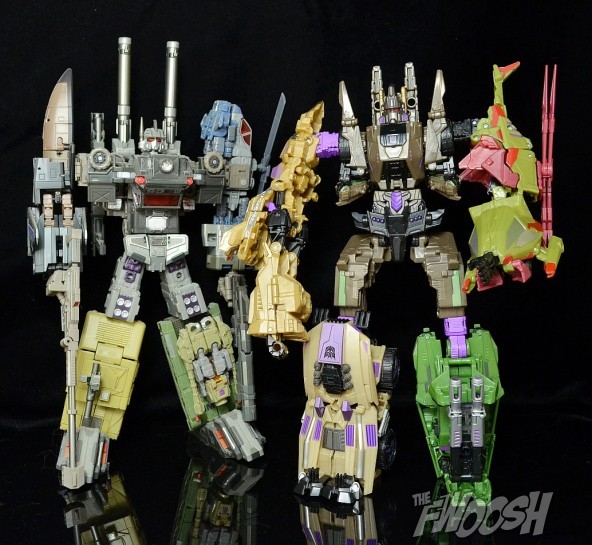 At $100, the price is not outrageous for what you get, but there is definitely a sticker-shock effect when you see it on the shelf. You’re getting a voyager and five deluxes, so the price seems pretty reasonable if you keep that in mind. It’s a shared exclusive that’s available at both Toys R Us and BigBadToyStore.

This set definitely isn’t for everyone, but there’s enough good here to justify its existence, but the cost/value component will depend on the individual. I have no regrets buying it, but now I find myself checking daily for updates on that upgrade set.